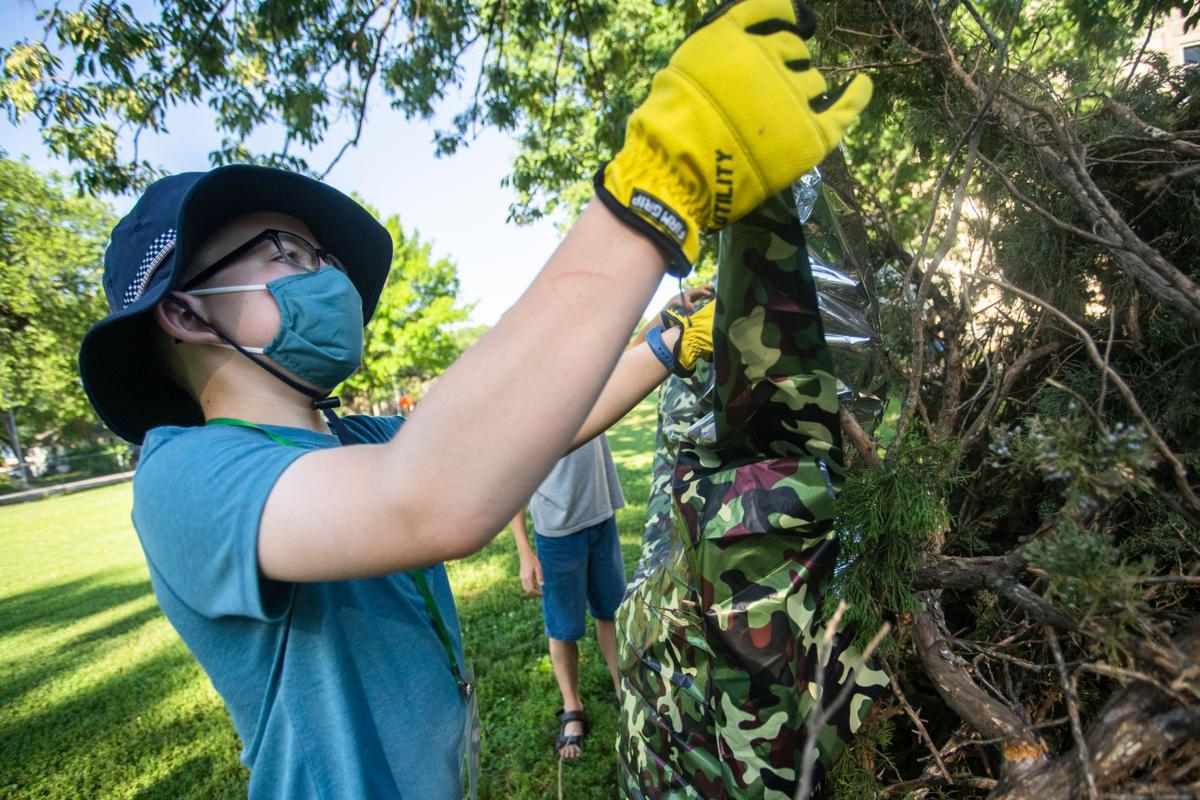 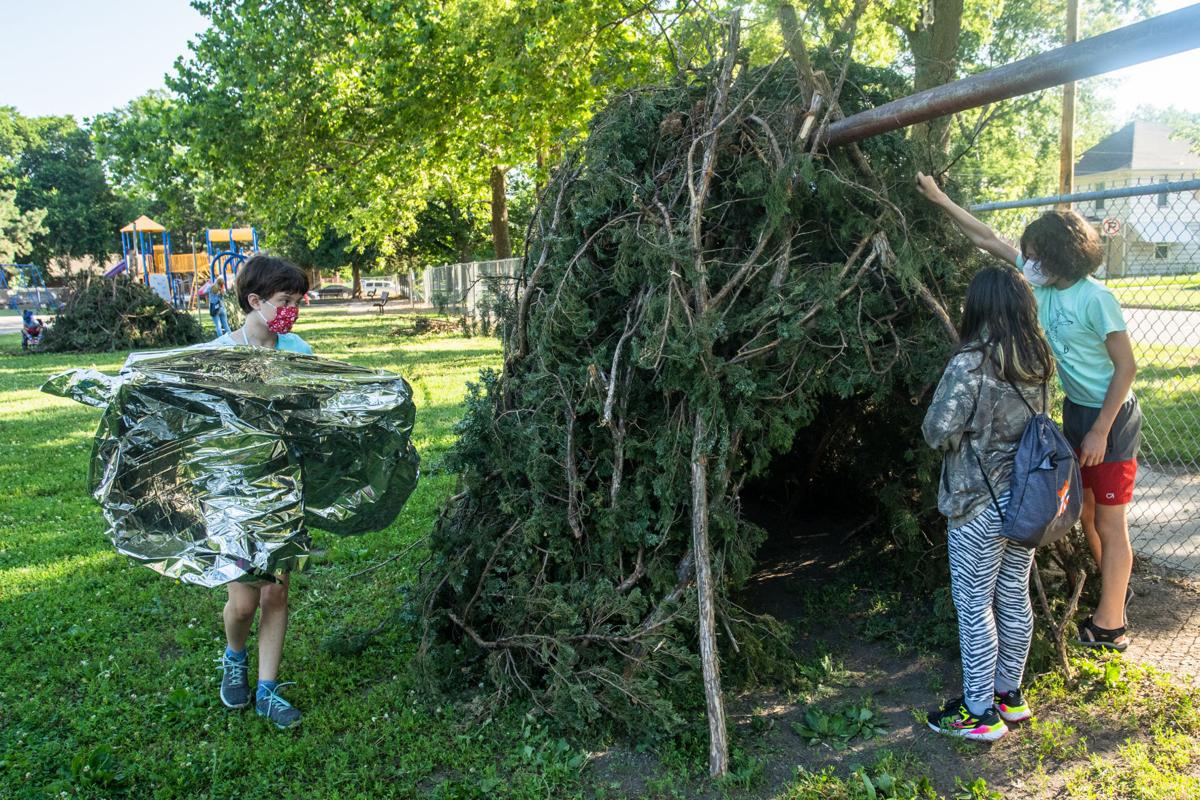 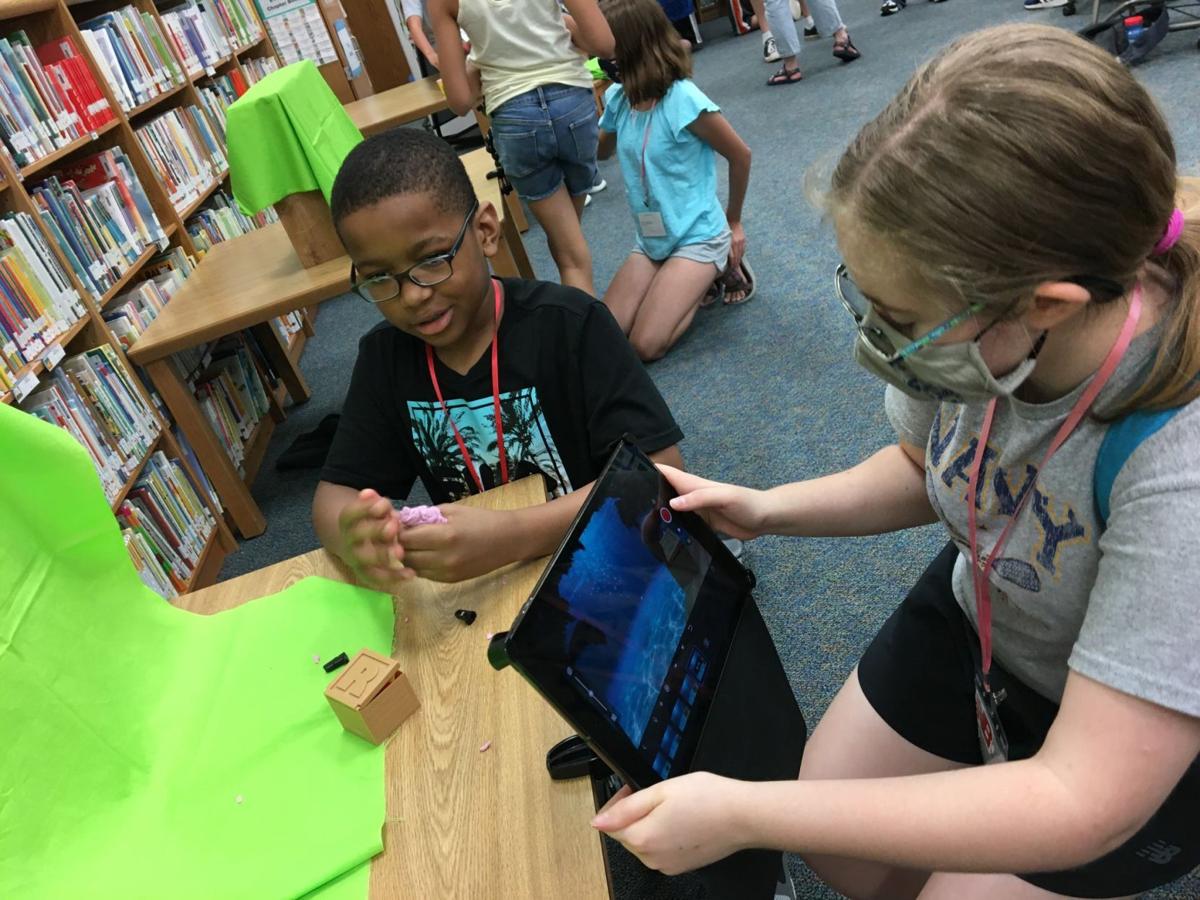 Julius Walker, left, and Caitlin Wolf work on a quick scene for their stop-motion movie featuring a Lego figure and a blob of Play-Doh.

Julius Walker, left, and Caitlin Wolf work on a quick scene for their stop-motion movie featuring a Lego figure and a blob of Play-Doh.

Julius Walker and Caitlin Wolf were having trouble differentiating the narrative of their stop-motion film from other examples.

“It’s the ‘Play-Doh box of horror’ story,” Walker said. “I think other people have been stealing our idea.”

Walker and Wolf are both seventh-graders who will attend Anthony Middle School this fall. They were just two of about 300 students from fifth through eighth grade who are participating in the USD 383 Science, Technology, Engineering and Math (STEM) Institute this summer. Approximately 100 other students are registered for a separate STEAM (science, technology, engineering, art, mathematics) program taking place virtually.

This year’s summer STEM Institute took over classrooms in Bluemont Elementary; typically, the camp is held in Bluemont Hall on the K-State campus, but pandemic restrictions meant a change in venue for this year. In 2020, the STEM camp was completely virtual. Wolf said she prefers an in-person experience.

“It’s better to be around other kids, and for them to maybe try new things with new people,” Wolf said.

“Like making a horror movie about a Lego guy being eaten by a blob of Play-Doh,” Walker said.

Theodore Roosevelt Elementary School principal and STEM Institute organizer Ashley Smith said that opportunity to try something new is part of what makes the camp great.

“One of the benefits is that students can find specific areas of interests and delve in deep to the concept for a whole week,” Smith said. “They have the time to investigate and explore, and really get engaged with the content.”

The variety of content is vast. Camp courses range from an introduction to veterinary medicine, crime scene investigation, digital media and journalism, Lego robotics, and sewing. The “STEM in the Outdoors” class has students building lean-to shelters out of discarded branches from a fallen tree. They then test the durability of their shelters by lobbing water balloons at them. The “Explore Manhattan” course takes students to the Flint Hills Discovery Center, A&H Farms, and the Konza Prairie Biological Station and gives them activities to help them learn more about area geography.

Wolf and Walker’s task was to assemble their own stop-motion film using an iPad, the Lego figure and Play-Doh, but with a twist: periodically they had to switch stations and contribute to other teams’ film projects. Walker said their movie may or may not make sense in the end.

“It’s about a guy with removable limbs who has a very bad day,” Walker said.

The Bluemont Elementary practice gymnasium was abuzz as several small quad-rotor drones hovered simultaneously. James Alberto, an instructor in the KSU College of Education, is overseeing a course that has students programming the drones to fly around and through obstacles of their own design. Children are given an iPad with an app that is used to program the drone to obey various commands and functions.

“These things are really cool,” Alberto said. “The app uses block commands to control the drone, so they’ll put in what we call ‘move blocks;’ there’s commands for take-off and land, move left or right, stuff like that… they can tweak the movements too, so they can make the drone move forward for four seconds, or 20 inches, or whatever you want.”

Alberto said the process is “a lot of trial and error,” but he said the group of kids he had Wednesday “seemed to catch on” to the drone programming quickly.

Students in the K-State College of Education lead the classes, both as a volunteer opportunity and a way to earn credit toward their teaching degrees. Lori Goodson, associate professor in the College of Education and K-State coordinator for the STEM Camp, said that experience helps alleviate whatever stress the students might be feeling as they embark on their teaching career.

“They get some great positive reinforcement from their time leading kids through these courses,” Goodson said. “It lets them know right away whether they’ve chosen the right field.”

The last day of the camp is June 24. The STEM Institute is in its 11th year, and Goodson said she can only imagine how much the program will continue to grow in the future.

Walker and Wolf both said they would probably participate in next year’s STEM camp.

“I think it should be fun,” Walker said. “It’s better than being bored at home all summer.”

Lemon on Jim Jordan: Does this guy seem nervous to you?