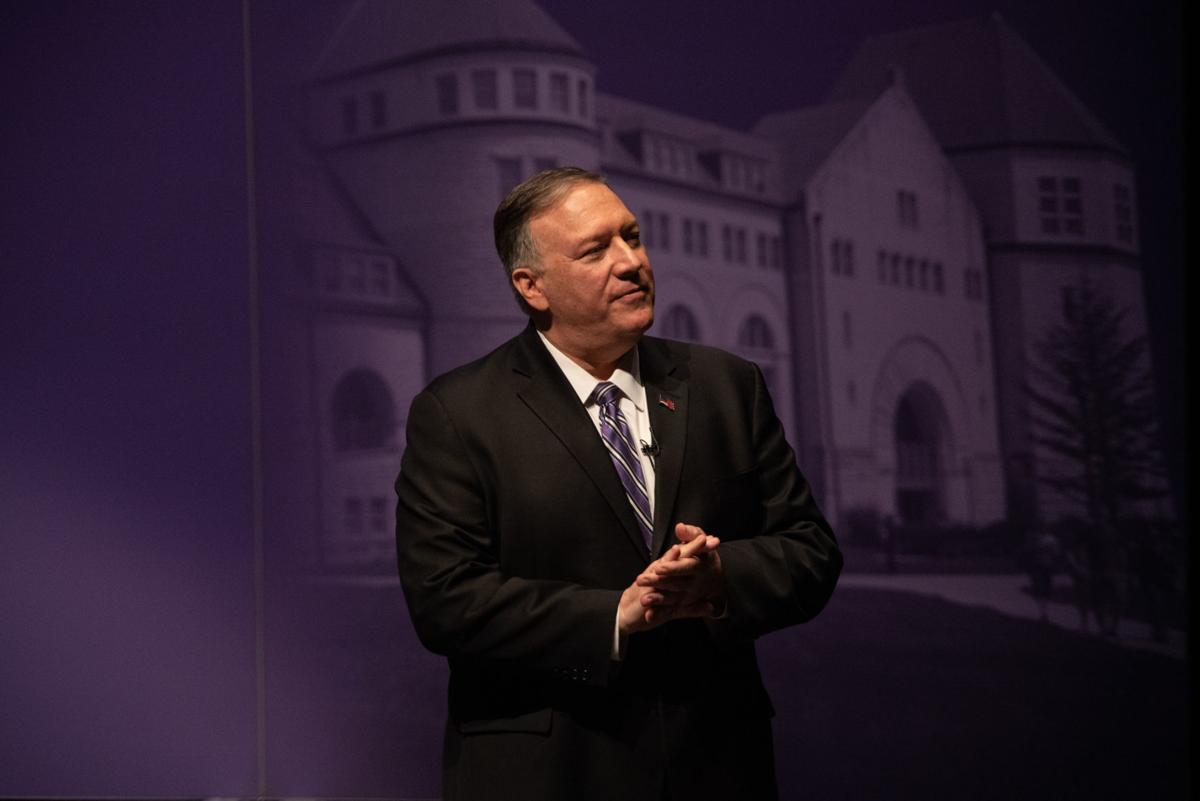 U.S. Secretary of State Mike Pompeo speaks at the Landon Lecture Series hosted by K-State in McCain Auditorium on Friday. 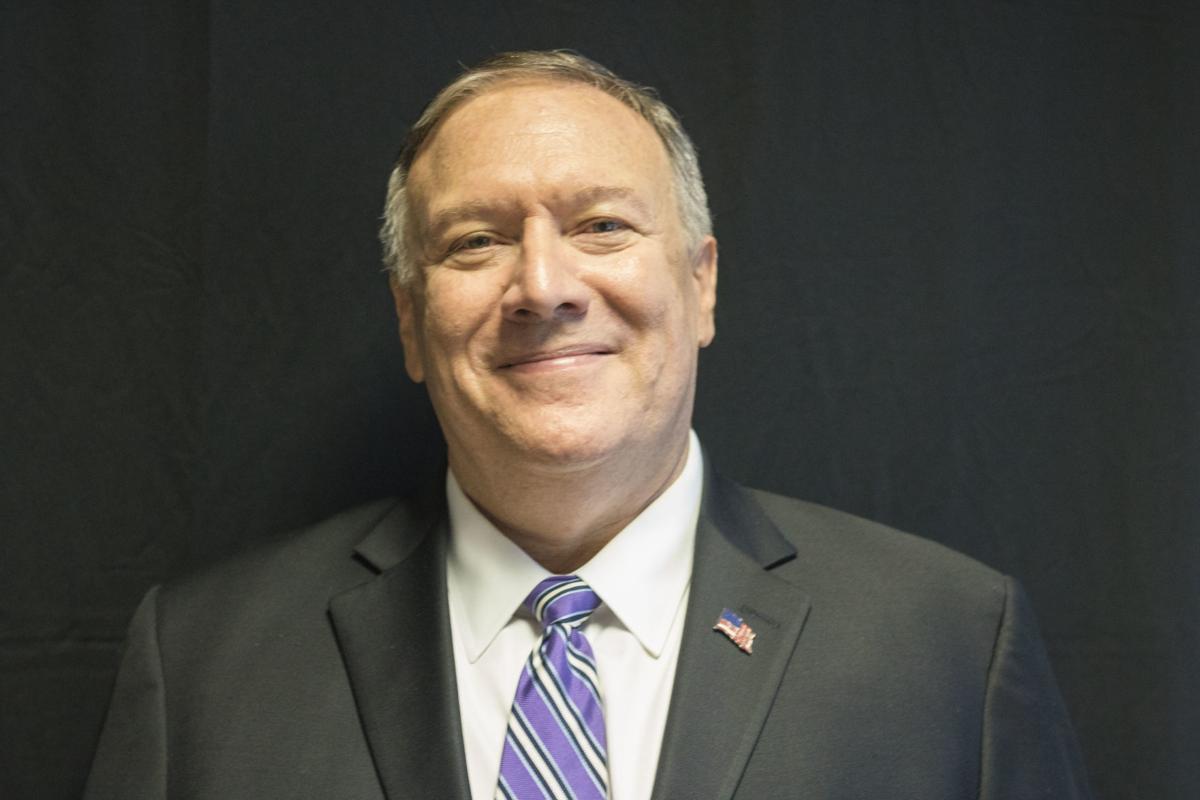 Farmers who have been financially harmed by President Donald Trump’s trade war with China are a “hiccup” in the America’s path to long-term financial success, U.S. Secretary of State Mike Pompeo said Friday.

Following a Landon Lecture that he gave at K-State’s McCain Auditorium on Friday, Pompeo — a former four-time elected representative for Kansas’ 4th Congressional District, former CIA director and now, the country’s top diplomat — sat down with The Mercury to discuss his speech, his work abroad and whether he’s considering running for the Kansas GOP nomination to take over for U.S. Sen. Pat Roberts, who announced earlier this year he will not seek reelection in 2020.

On Sept. 1, U.S. tariffs of 15% on $112 billion dollars of Chinese goods went into effect, which the Chinese countered with tariffs between 5% and 10% on $75 billion in American goods. In early August, China announced that it would stop buying American agricultural goods, putting a squeeze on Kansas farmers. A Trump bailout package has paid Kansas farm owners $539 million over the past two years, the Kansas City Star reported in August.

Pompeo said that while neither he nor the president are happy when American industry is caught in the crossfire of economic war, he pointed to Friday’s federal employment report, which showed that the national unemployment rate has remained at 3.7% for the third straight month, among the lowest rate in the past half century.

“With respect to agriculture in particular, I think this administration has been enormously beneficial to the agriculture community,” Pompeo said. “We’ve created enormous energy stocks that are the feed stock for American agriculture. We’ve done away with some of the craziest ideas on agriculture regulation that the Obama administration had put forward. More will follow, and we’ll continue to repeal those regulations in ways that will allow agriculture to thrive and to flourish.”

Pompeo said that when he was a representative, Kansas farmers would complain to him about China — that Chinese markets were closed to them or that high tariffs kept them from selling their agricultural goods in China. In imposing tariffs on Chinese products, Pompeo said that Trump is trying to fix a trade disbalance.

“The Chinese don’t want to give those enormous trade advantages up, so the president has identified a problem and is working diligently to ensure that those agriculture families that depend on ag here in Kansas can pass their farm off to the next generation, and you won’t have China abusing them,” Pompeo said.

He said Republicans and Democrats alike have not had the drive to confront China, but Trump is not necessarily trying to punish the country.

“We’re simply trying to get them to behave in the commercial world by the rule of law, and when they steal Kansans’ property — intellectual property theft amounts to hundreds of billions of dollars that China has stolen — President Trump is saying, ‘No, that’s not right. We’re not going to let that go on.’ And previous administrations just let that go,” Pompeo said.

“So there could be some hiccups in the short run,” he continued. “I suppose it’s possible that the economy’s growth suggests they’ve not been significant — yet. It doesn’t mean that there aren’t families who are not impacted. We know that’s the case. We regret that, and President Trump is doing everything he can to mitigate it, but it does tell you that every one of those families will be far better off two, four, six, eight, ten years from now, and their kids and grandchildren won’t be subject to the horrific trade deals that the Chinese have presented to us all these years.”

When asked to clarify his Friday lecture on unalienable rights, in which he likened the idea of too many rights to having too many ice cream cones, Pompeo said he simply wants to make sure rights are carefully considered when they’re implemented.

“When you deem something an inalienable right, everyone has an obligation to make sure you get that and that’s important, because if you put that burden on others to deliver that right to you, you have to make sure that it’s truly at the core of the things that matter most,” Pompeo said.

Pompeo said he wasn’t calling out any specific rights or movement for rights in his speech. Rather, he said he wants to protect what he called core rights, particularly the ones enumerated in the U.S. Constitution and Bill of Rights. Those core rights have not changed in the nation’s 200-plus year history, he said.

“Much depends on the capacity for the First Amendment and the protection of freedom of speech,” Pompeo said. “If you can’t get that right, then our republic is at risk. There are other rights that if you get them wrong, or other ideas that people describe as rights — if you get them wrong, it doesn’t get to the central nature of the American experience. I want to make sure we focus on the things that if we get them wrong, if we undermine them, and if we don’t speak about them correctly, then we risk this amazing experiment, now a couple hundred plus years old, that is like no other nation in the history of the world.”

On the subject of a potential Senate run in 2020, Pompeo said he has made a definitive decision to focus on his current job as secretary of state.

Although his work as secretary of state takes him abroad, Pompeo said Kansans should care about his work because the State Department solves diplomatic crises before they escalate into more serious matters that could put American soldiers’ lives at risk, especially in dealing with countries he said want to do the U.S. harm.

Right now, Pompeo said he’s been concerned with nuclear proliferation, especially in working with countries like Iran and North Korea.

“We want to make sure that nuclear proliferation is always at the front and center for how we think about national security,” Pompeo said.

In more broad matters, Pompeo said radical Islamic terrorism is still a major threat for national security, but the U.S. has been successful recently in taking down the Islamic caliphate in Syria. Further east, he said China poses a threat to American commerce in the South China sea and the “very sea lanes that are the arteries for commerce around the world.”