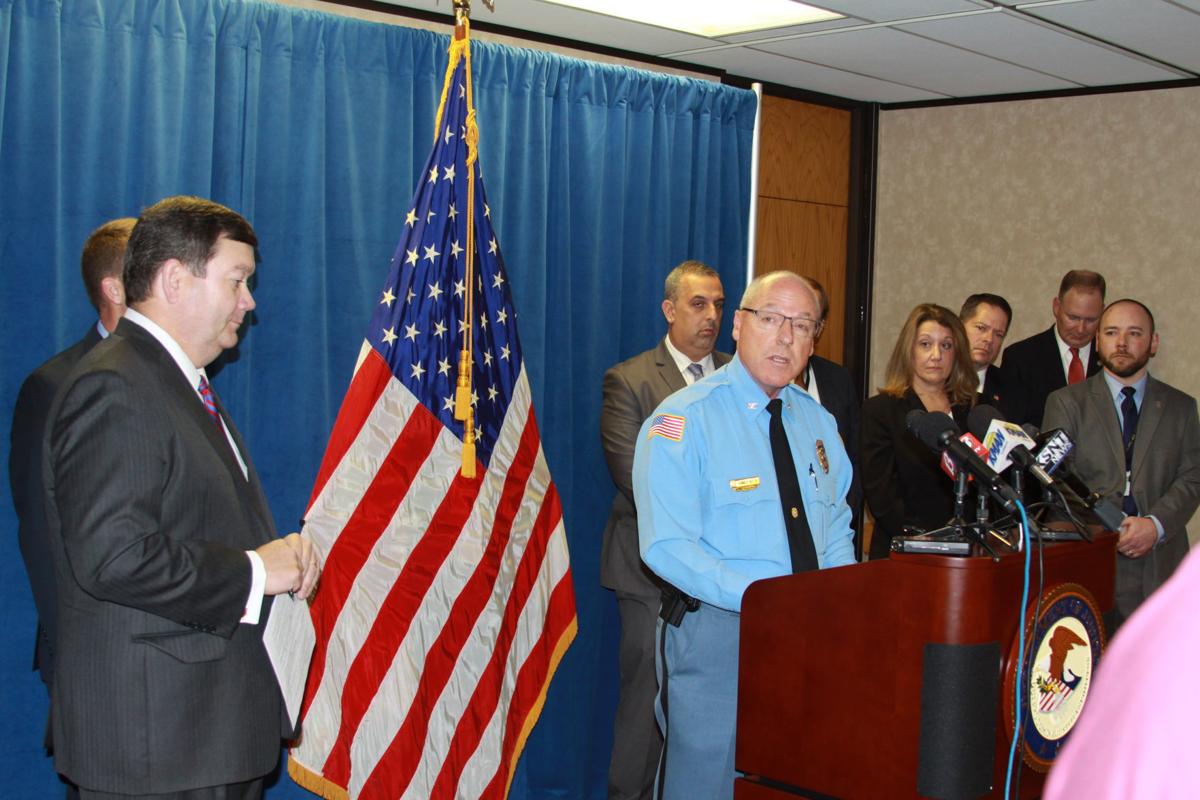 RCPD Director Dennis Butler speaks at a press conference on Wednesday in Topeka announcing a drug bust that led to the indictment of 54 people. TOPEKA — Local and federal law enforcement authorities Wednesday announced the indictment of 54 people in a drug-trafficking ring in Manhattan.

That ring, with suppliers tracked back to Chicago, was responsible for distributing heroin, fentanyl, ecstasy, methamphetamine, hydrocodone, cocaine and marijuana in the Manhattan area, the authorities said. U.S. Attorney for Kansas Stephen McCallister called it the “largest takedown” his office had ever conducted.

Six dealers are charged in particular with causing the death in September 2017 of Maxwell F. Dandaneau, an 18-year-old student at Kansas State University, at an off-campus apartment. He was found in the 1100 block of Pioneer Lane, according to police.

McAllister said the young man, who had attended Eisenhower Middle School and Manhattan High and was the son of an administrator at K-State, was trying heroin for the first time and was unaware that it was laced with fentanyl, a synthetic narcotic more powerful than heroin.

That death followed by about a month the beginning of a criminal investigation by the Riley County Police Department into the network, according to Capt. Tim Hegarty. The investigation was able to tie the death to that drug ring. Blake Woodward, 23, is charged with directly distributing the fentanyl that caused his overdose; others charged in the conspiracy include Henry Clark, 42; Sylvester Calvert, 31, of Manhattan; Michael Calvert, 28, of Manhattan; and James Toliver, 39, of Manhattan.

Hegarty said other deaths may be related to the drug ring, including people who were both users and dealers, but authorities provided no other details on that.

The distribution ring, authorities said, was basically one organization with a hierarchy that traced back to Chicago, with supply lines from Mexico and China.

A statement released at the time of the announcement in Topeka says: “Law enforcement officers called the investigation Operation Chicago Connection, based on the fact that in 2016 investigators began to hear talk on the streets of this college town about traffickers who some sources called ‘the Chicago Boys.’ In the following months, investigators worked to get a clearer picture of what was going on. What they learned was that some traffickers were making regular trips to Chicago to bring back heroin, fentanyl and other drugs.”

Riley County Attorney Barry Wilkerson said that some of the members of the ring have lived here for 20 years. RCPD Director Dennis Butler said that a case that became this large required help from federal authorities.

Authorities at the press conference Wednesday at a federal office building in Topeka were quick to say that the major bust did not indicate that Manhattan had some unusually large drug problem. The cops routinely bust drug dealers in metro markets around the state, but not in one coordinated effort. As McAllister said, police and prosecutors in his case were “able to get our arms around it” in Manhattan, and had “an opportunity to really clean out a city.”

“Manhattan I don’t think is unique,” said Skip Jacobs, assistant U.S. Attorney. “It just so happened that law enforcement was in the right place at the right time.”

Butler said that police would remain vigilant for whatever drug suppliers step in to fill the void. He credited a “team effort” at the RCPD and with the other agencies in cracking the case.

Roughly 35 people were arrested Tuesday as law enforcement authorities served arrest warrants and search warrants in Topeka and Manhattan. Defendants were expected to begin making initial appearances in federal court in Topeka on Wednesday. The arrests stem from 13 separate indictments.

Federal authorities, including the Drug Enforcement Administration office in St. Louis and the FBI, were in on the case. Their representatives also emphasized the danger of fentanyl in particular, saying it’s being mixed into other drugs at levels that could be lethal. They asked for the public’s help in combatting that problem.

Here are the details of the arrests and indictments:

(One defendant, fentanyl, removal of property to prevent seizure)

Indictment No. 11 (One defendant, heroin, felonious use of a communication device)

Indictment No. 12 (One defendant, felonious use of a communication device)

Indictment No. 13 (One defendant, firearms)

Upon conviction, the crimes in the 13 indictments carry the following penalties:

Conspiracy to distribute heroin resulting in bodily injury or death (Clark, S. Calvert, M. Calvert, J. Toliver, B. Woodyard): Not less than 20 years in federal prison and a fine up to $5 million.

Conspiracy to distribute heroin resulting in bodily injury or death (K. Obrecht): Not less than five years and not more than 40 years, and a fine up to $5 million.

Distributing heroin resulting in bodily injury or death (B. Woodyard): Not less than 20 years and a fine up to $5 million.

Conspiracy to distribute controlled substances: Up to 20 years and a fine up to $1 million.

Conspiracy to distribute heroin and fentanyl: Not less than five years and not more than 40 years and a fine up to $5 million.

Unlawful possession of a firearm in furtherance of drug trafficking: Not less than five years and a fine up to $250,000.

Conspiracy to distribute methamphetamine: Not less than 10 years and a fine up to $10 million.

Possession with intent to distribute methamphetamine: Not less than five years and not more than 40 years and a fine up to $5 million.

Conspiracy to make a false statement to obtain a firearm: Up to five years and a fine up to $250,000.

Using Facebook Messenger in furtherance of drug trafficking: Up to four years and a fine up to $250,000.

Governor of Florida says if Walmart can open, so can schools