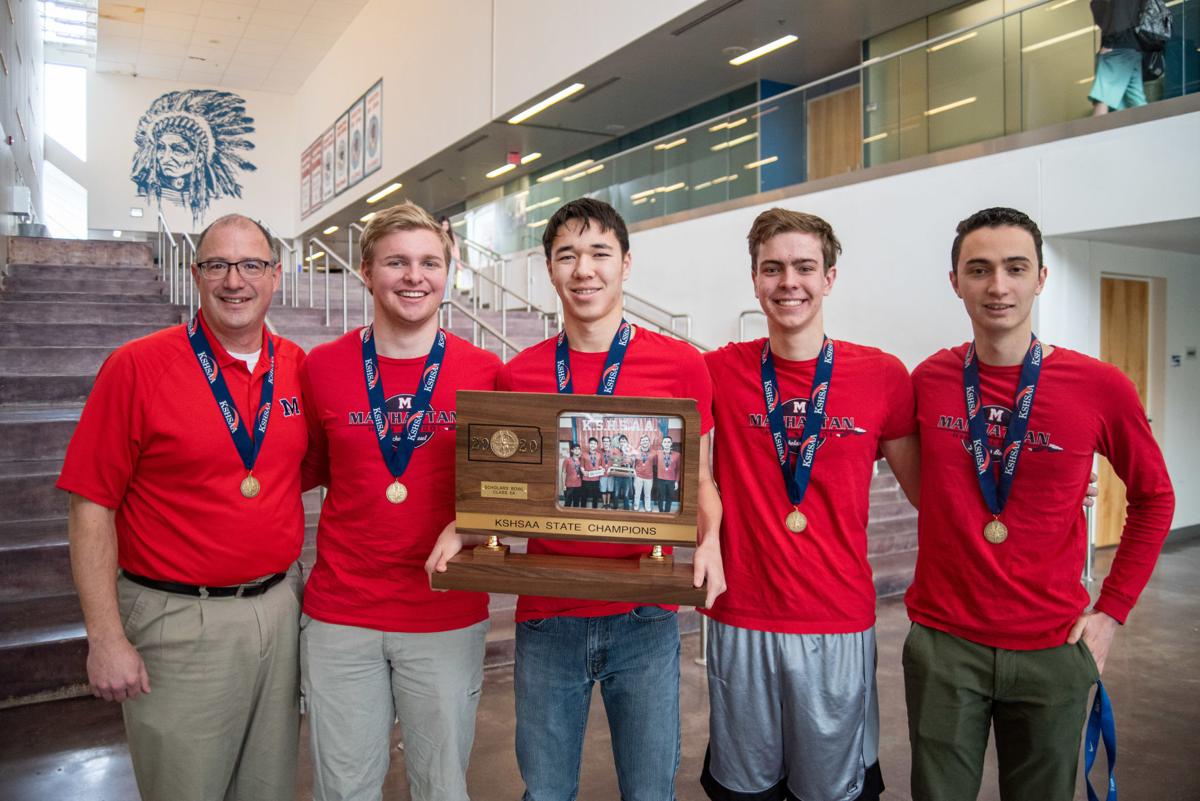 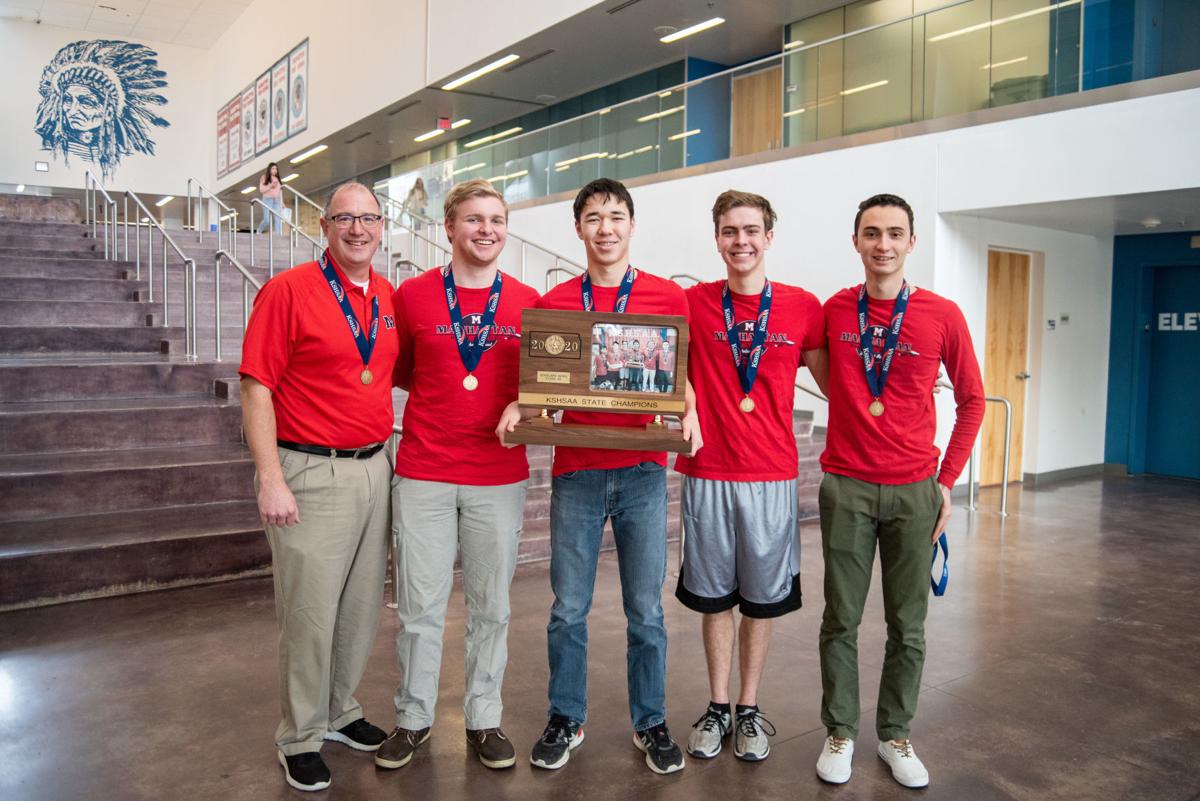 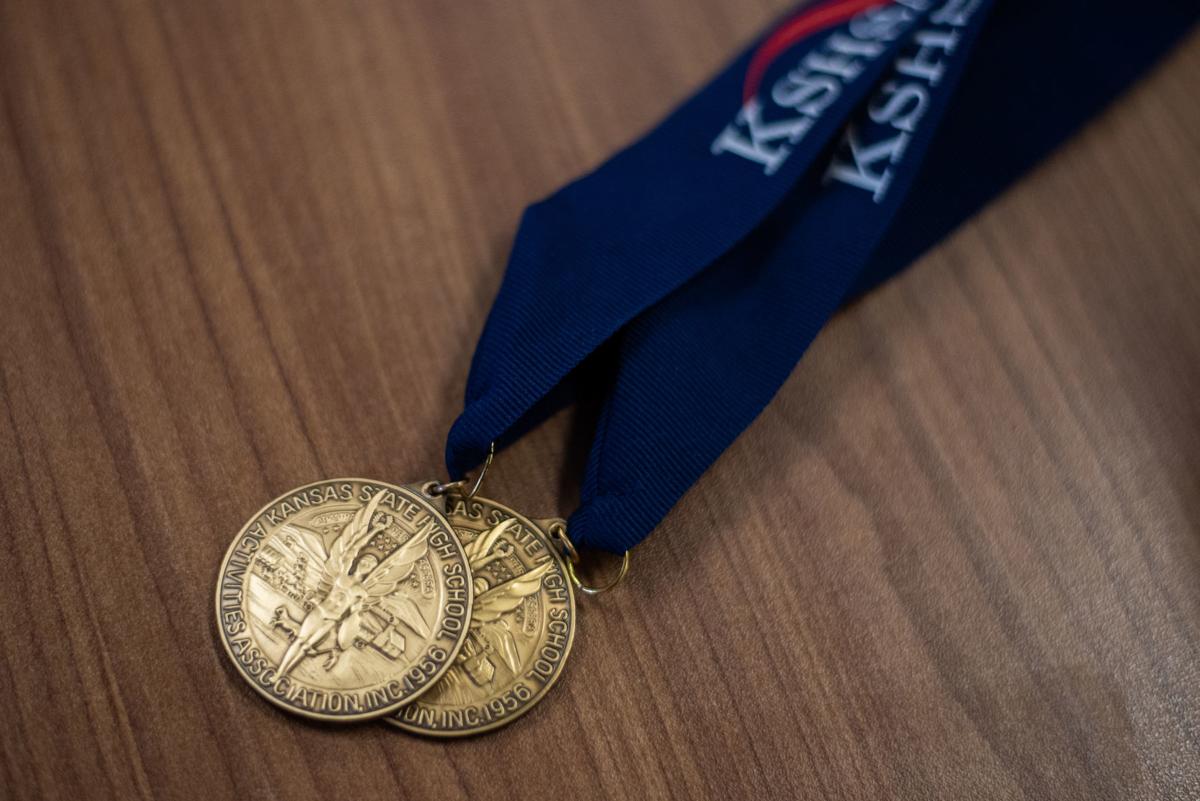 KHSAA Medals are awarded to Manhattan High’s winners of the Scholars Bowl. 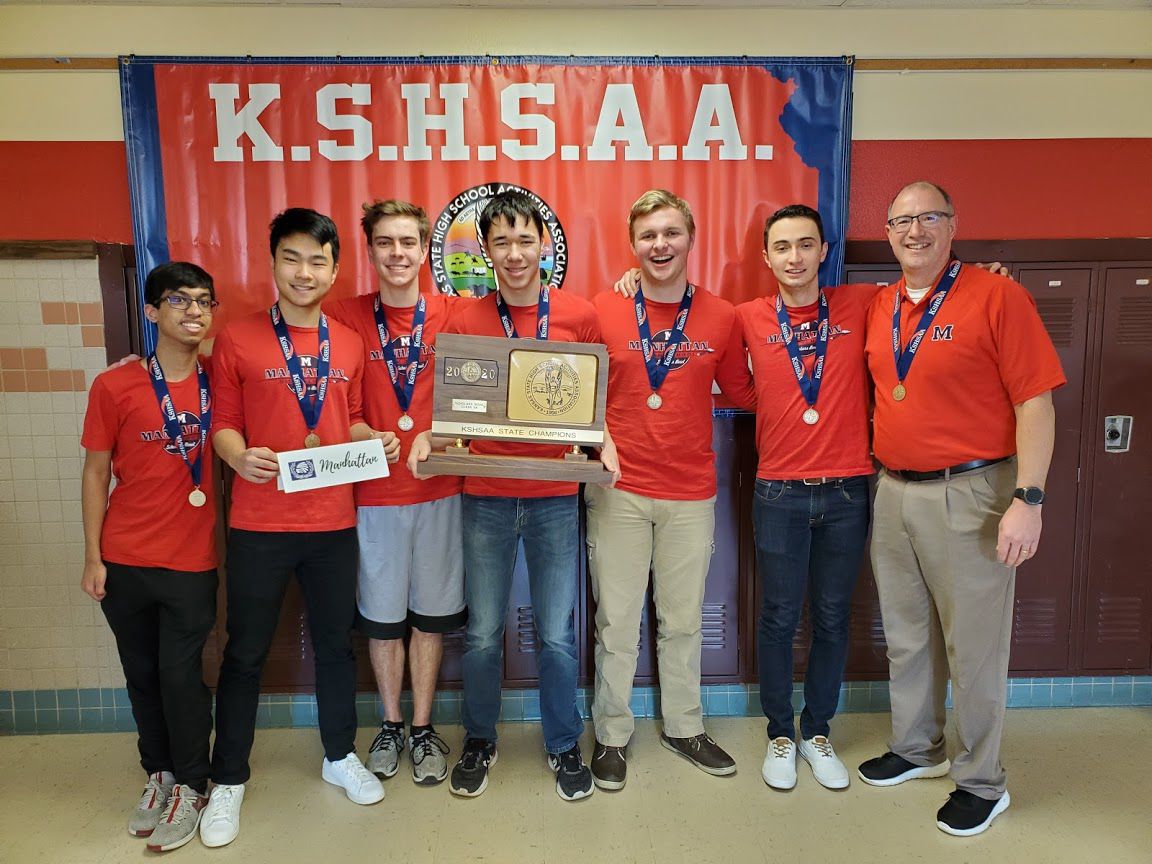 KHSAA Medals are awarded to Manhattan High’s winners of the Scholars Bowl.

If Alex Gordon had been waved that last 90-foot stretch home. If Dee Ford hadn’t lined up a couple of feet offsides.

But in “if” — the grand, single-word question that often haunts would-be’s, second-places and also-rans — is a chance for teams to find redemption, to build on a newfound hunger for victory that only comes after brushing near it.

It’s a question the Manhattan High School scholars bowl team — made up of seniors Josh Brandt, Bryan Dudley, Ethan Myer, Alejandro Ortiz, Allen Zhang and sophomore Abrar Nasser — answered for themselves last Saturday as well when they finally hoisted the 6A state championship trophy for the first time in 27 years.

MHS teams had been to six consecutive state tournaments, head coach Ted Dawdy said, but the state title had eluded them, particularly last year. Had it not been for a math calculation error and an early buzz-in against Olathe North at the 2019 state semifinals, Dawdy is confident the MHS team would have been state champs last year.

Instead, the team could only sit and watch as Olathe North went on to win the championship match.

“They felt like they would have won championship game,” Dawdy said. “You could tell it stuck with them all year. We should’ve had two of these (trophies) in a row.

This would be their “if.”

In scholars bowl, two teams of six students face off against each other, with a moderator asking questions on subjects like math, history, science and foreign languages from a pool submitted from schools across the state. A match involves 16 questions, each worth 10 points.

The nature of the rules leads to fast-paced, high pressure rounds, but this year, the MHS team used that to their advantage. The team played with an aggressive approach to the buzzer, which pressures other teams to try to be as quick.

Questions in scholars bowl typically follow a pattern, and by identifying key words in those questions, the teams don’t even need to hear the entire question. One example that the team gave of that is a question that started by asking “Which Native American confederacy…”

While there were several, the most historically significant was the Iroquois, and the team answered that correctly without needing to know the rest of the question.

Zhang, the team captain, also played a high-stakes approach to math questions, buzzing in before he completely worked out the questions using the provided pencil and paper. Instead, he would work out the last parts of those questions in his head during the three seconds he had to voice his answer after buzzing.

“I feel like our fast buzzing style forces other teams to try to adapt,” said Brandt. “They’re so used to thinking through questions. We listen through for key words or questions we’ve heard in the past. As soon as we have a decent visual of the thing they’re trying to ask, and we think we know, we buzz in.”

It was that pressure that would lead to Manhattan High’s triumph over Washburn Rural in the final, the perennial powerhouse in scholars bowl.

Feeling the pressure to buzz in fast, Washburn Rural went down quick on incorrect early buzzes, and by the 12th question, it was mathematically impossible for them to come back against Manhattan High.

“It wasn’t tense, but it was exciting,” Brandt said. “It was something that we’d been working toward for a while, and to finally see it happen, it was pretty magical.”

Veteran students on the team also recruited Ortiz, who speaks Spanish and German, to the team. With his help, the team dominated on foreign language questions, which are typically simple translations of posters with phrases in French, German and Spanish.

But beyond Ortiz, the team did not have any set “specialists” in subjects. Other schools, like St. James Academy, cut students from their teams and often assign specialist roles in each of the scholars bowl subjects.

Manhattan High does none of that. About 20 students actively participate in either the varsity or junior varsity teams, Dawdy said. Scholars bowl students usually are heavily involved in other activities, so to field teams at the tournament, Dawdy said he takes volunteers from about 12 students on the varsity team. Dawdy said the state tournament was the first time in the season he could field his strongest team.

“A lot of teams have a center person who is amazing, but this team was great, because they were all strong,” Dawdy said. “It made a difference and made us so good this year.”

Collegiality can be tough for that reason, Dawdy said, but the team said they were able to gel together once they learned to start trusting each others’ knowledge.

“We’re a mosaic,” Myer said. “We know a lot of questions, but its spread across all of us.”

The teammates joked about going to local trivia nights as fundraisers for the program. The only problem?

“There might be some pop culture we don’t get,” Brandt said. “We’re nerds.”

“I’ll remember the fun that I had, but especially how the fun translates into my passion for trivia and a knowledge for learning,” Myer said. “We’re seniors, we’re selecting majors for college, and it’s really hard, especially after Scholar’s Bowl. I realized I love so many things.”

The hope is to build on that success and earn recognition for the activity. Dawdy said he’s working on getting a banner in the gym to “immortalize” the team’s accomplishment.

“I think the fact that scholars bowl is now getting more recognition,” Myer said, “it sparks joy in my heart, especially because I love it so much. It seems slightly underrepresented. I know a lot of activities can feel that way, but I think Scholars Bowl is a bit different. This is good for the competition in general.”

'That's extraordinary:' Cooper reacts to audio between Trump and governors

See how hospitals are adapting to equipment shortages