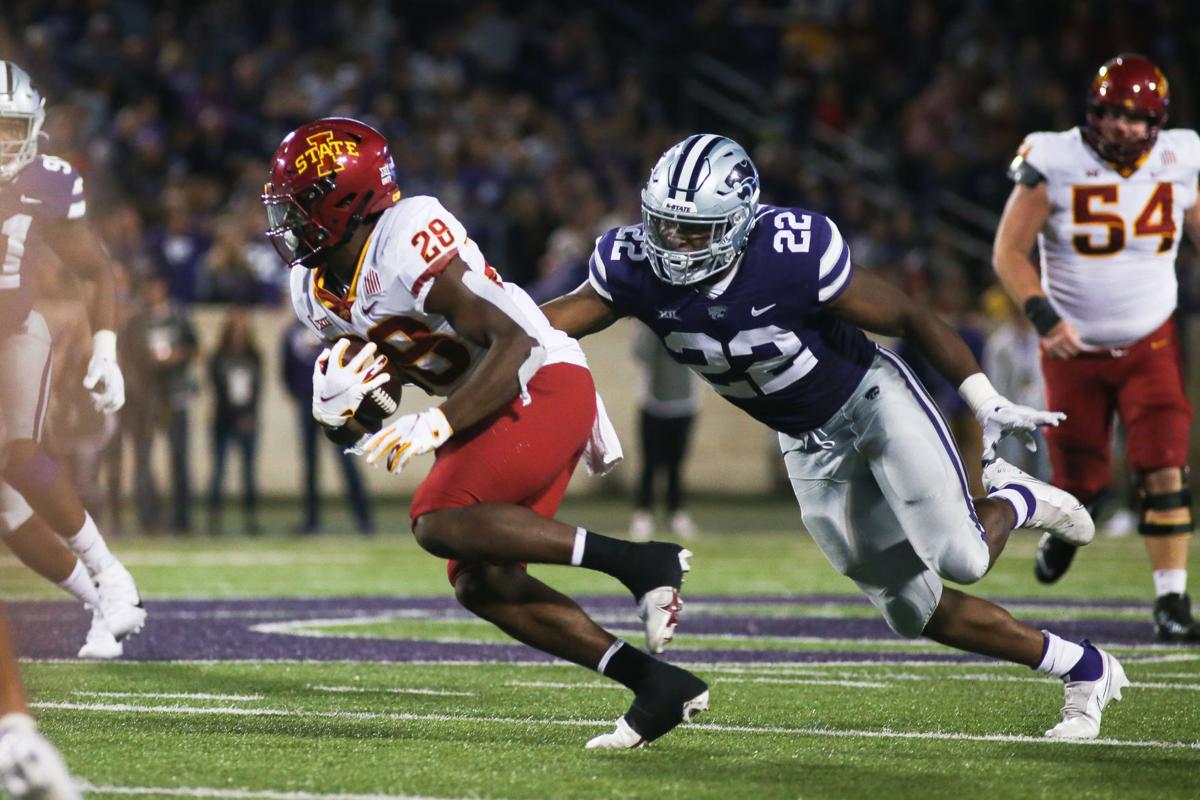 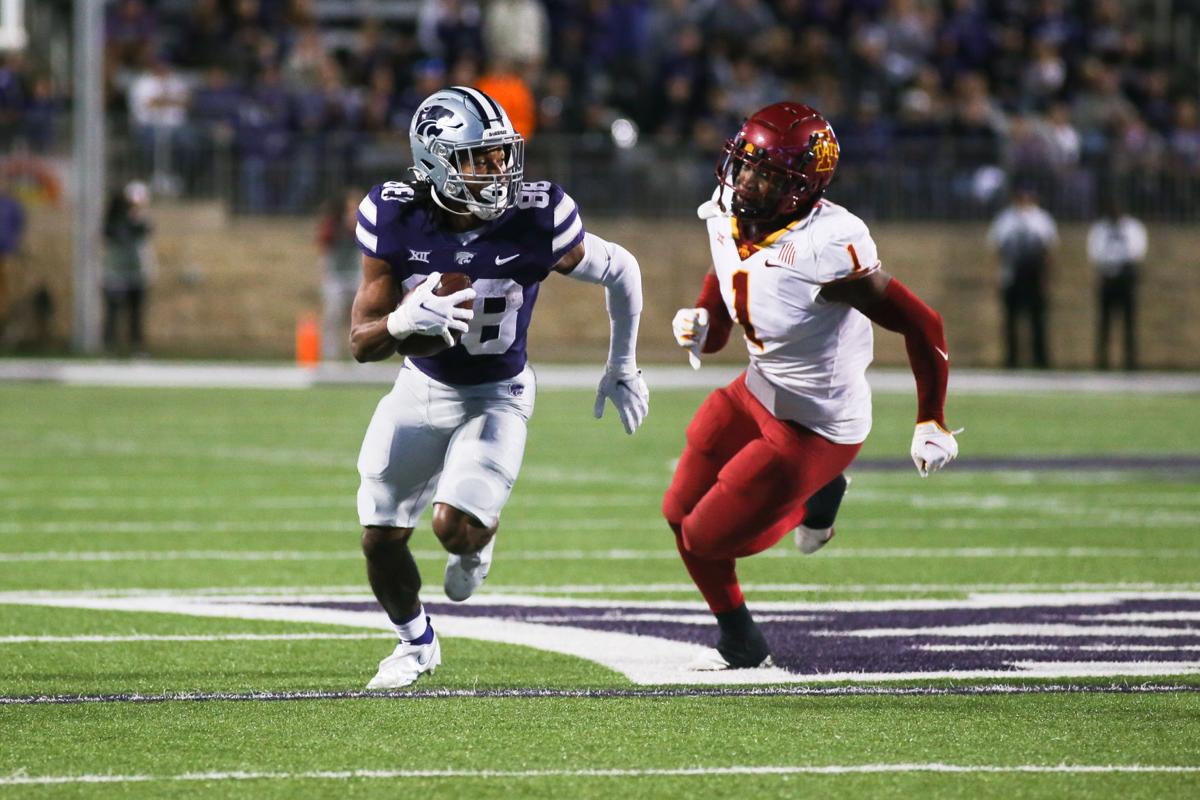 Kansas State receiver Phillip Brooks (88) runs upfield against Iowa State Saturday night. The 20-yard reception was called back after officials ruled the ball hit the ground before Brooks caught it.

Kansas State receiver Phillip Brooks (88) runs upfield against Iowa State Saturday night. The 20-yard reception was called back after officials ruled the ball hit the ground before Brooks caught it.

Breece Hall, the pride of Wichita, took an inside handoff on Iowa State’s first play from scrimmage Saturday and immediately glided to his right, nothing but open field in front of him. He nearly took it 75 yards to the house untouched; the only reason he didn’t is because defensive back Julius Brents never gave up on the play, catching up to Hall just outside the 10-yard line. Brents dived at Hall’s feet. He stumbled, but it takes far more than a game effort to bring down the 6-foot-1, 220-pound Hall, one of the nation’s top tailbacks.

Hall crossed the goal line, let go of the ball and looked into the stands, moments before his teammates finally caught up to congratulate him.

It gave Iowa State a 7-0 lead over Kansas State with only 12 seconds off the clock. And the situation never improved for the Wildcats.

Playing from behind from the get go, K-State never fully dug out of the early hole, falling 33-20 at Bill Snyder Family Stadium.

“We just missed a fit and two guys ran into each other,” Klieman said, “and (Hall) popped a big play.”

Sophomore defensive end Felix Anudike-Uzomah said it was more than that, though. He said he’d never seen the blocking scheme the Cyclones utilized on the play. Iowa State hadn’t shown it on film in any games Anudike-Uzomah studied.

“I think it was a stretch (play),” Anudike-Uzomah said. “(Iowa State blocked it) differently than what we had seen on film, so that kind of got us off guard, because through the run gaps, it messed up our gap scheme.”

Reggie Stubblefield admitted it was a shock to the system to permit such an explosive play on the first snap. To make matters worse, he said, the play resulted in a touchdown.

“It’s tough, because as a defense, you don’t want to give up a touchdown if it’s at the 1-yard line, the 20-yard line or the opposite 1-yard line,” said Stubblefield, a key member of the K-State secondary who collected four tackles in Saturday’s loss. “But we know adversity is going to happen. It happened early. All we can do is just keep fighting.”

Just don’t describe the miscue as a “slow start.”

“That isn’t a slow start; that’s a mental error,” he said. “We can’t make the critical errors and give a kid of that ability the space to make a big run.”

The Cyclones (4-2, 2-1) tacked on a field goal later in the quarter — capitalizing on an interception from K-State quarterback Skylar Thompson — to push their lead to 10-0 at the 7:36 mark of the opening period before the Wildcats got on the board.

One drive after the interception, he capped the next possession with a 40-yard scoring strike to junior receiver Phillip Brooks.

Thompson was well prepared. The look Iowa State’s defense gave him on the play was one he had worked on all week during practice. The play he relied on to beat the look during practice, however, wasn’t exactly how it transpired Saturday.

“We made a little adjustment to the play, a double move that I like a lot, and honestly the (Iowa State defender) played it really, really well,” Thompson said. “I just trusted Phil. I knew I had the whole side of the field to work with, so I just threw it out there and trusted his speed and Phil made a great play for me.”

But that was as close as the Wildcats ever got to the visitors on this day.

Then came what Klieman viewed as the game’s most important turn of events: a K-State drive that (at least initially) held much promise but left the hosts empty handed.

On the subsequent possession after the Thompson-to-Brooks touchdown, the Wildcats took over at their own 44-yard line. They quickly marched close to the red zone, with a first-and-10 at the Cyclones’ 22-yard line.

Thompson dropped back and threw toward junior receiver Tyrone Howell in the end zone.

The home crowd erupted in a chorus of boos; it wanted a penalty called on Iowa State defensive back Craig McDonald, who guarded Howell on the play. Though replays showed McDonald impeded Howell to an extent, no flag came.

One play later, it did: The Wildcats moved back 5 yards for a false start committed by left tackle Cooper Beebe.

The Wildcats put the penalty behind them on the next snap, as Thompson found Brooks again, this time for 20 yards.

For a few minutes, anyway.

Officials reviewed the play. Ultimately, they ruled the ball hit the ground before Brooks secured it.

Thompson absolved his teammate of any blame.

“I knew I was going to have a guy in my face and knew I had to get the ball out instead of trusting it and throwing it,” said Thompson, who was 15-for-23 passing for 206 yards, two touchdowns and the aforementioned interception while also scoring once on the ground. “I couldn’t really see Phillip with the guy in my face, so I just tried to hand it to him. So it’s just one I’ve got to trust and throw.”

Star sophomore Deuce Vaughn picked up 12 yards on the ground on third-and-12, setting up Winkel for a 33-yard field goal.

Dependable as Winkel had been leading into Saturday — he had made 85.7% (6 of 7) of his field goal attempts through K-State’s first five games this fall — he pulled this try wide right.

After a drive that had its share of twists and turns, to walk off the field with no points to show for it was a gut punch.

“We needed to get points there,” Klieman said. “I thought we could get seven, and we needed to at least get three to tie it up. Instead, it goes the other way.”

The Cyclones went on to score the next 17 points to extend their lead to 27-7 and effectively seal the victory — and in the process, clinch a season sweep of the Sunflower State, which came in consecutive outings. In the Cyclones’ previous contest, they beat the brakes off KU, 59-7, on Oct. 2 in Ames, Iowa.

While K-State scored a pair of fourth-quarter touchdowns (the first a 1-yard run by Thompson, the second a 9-yard pass to Malik Knowles), it couldn’t trim the deficit to single digits.

Hall played a starring role in the latest win in his home state. He set a single-game personal best for rushing yards (197) to go along with two touchdowns on 30 carries. Saturday was the 18th consecutive game Hall has scored on the ground, the longest streak in conference history and the fifth-best stretch in the FBS since 1996.

“We ‘lose the cup,’ meaning losing the edge of the defense because they can’t see him, and they peek their head inside, and he bounces out for a 40-yard run,” Klieman said. “Those are the things that we worked on all week: to know your gap integrity and keep that and keep him ‘in the cup.’ He got out on a few occasions there that can’t happen.”

Hall admitted “this game meant a little more” to him given the circumstances: it might be the last game he ever plays in his home state as a collegian.

“It just felt good to come back home and know I had a whole bunch of love and support, just being able to see some of my friends from high school in the stands,” he said, “and to see my family, former coaches and teammates.”

When Hall wasn’t powering Iowa State’s offense on the ground, he ceded the stage to the aerial theatrics of quarterback Brock Purdy. A senior, Purdy entered the game having struggled at times this season, with eight touchdowns against four interceptions.

There were no signs of shakiness Saturday, however, as he picked apart the Wildcat defense.

“To be honest, Kansas State brought the heat, especially when they had an idea of when Breece was going to run it, but our offensive line did a great job,” Purdy said. “Kansas State changed up their defense to where they were only rushing three guys, so our O-line did a tremendous job, and I felt like we were really prepared for it.”

No surprise there: It’s the ninth straight contest Iowa State outgained its opponent. And a decent chunk of K-State’s yardage came in garbage time, too. The Wildcats added 66 yards to their tally on the game’s final drive before the clock finally ran out.

Klieman chalked up Saturday’s offensive inefficiency as a by-product of Iowa State’s defense, which entered this year’s edition of “Farmageddon” leading the Big 12 in both total defense (234.2 yards per game) and scoring defense (15.6 points per game).

“That’s the best defense in the league right now,” Klieman said, “so we’ve just got to be patient. And then when you have the opportunities to make plays, you’ve got to be able to make plays.”

Saturday’s defeat helped K-State make unwanted history: Not only was this its first home loss to Iowa State since 2004 (after a run of seven straight Wildcat victories in Manhattan), but it’s the first time since 2004 and 2005 that the Wildcats have dropped consecutive games in the series. (Last season in Ames, Iowa State blasted K-State 45-0, the most lopsided defeat in Klieman’s career as a head coach.) Iowa State has won three of the last four meetings overall — on the heels of 24 K-State victories in 28 years from 1990 through 2017.

Ever the optimist, Klieman marches on, his eyes already squarely focused on next week’s game at Texas Tech.

“We’re positive with the guys,” Klieman said. “We’ve got a challenge to go on the road now and try to regroup. I love the character and leadership in that locker room, and we’ve just got to fight back and try to go 1-0 next week.”