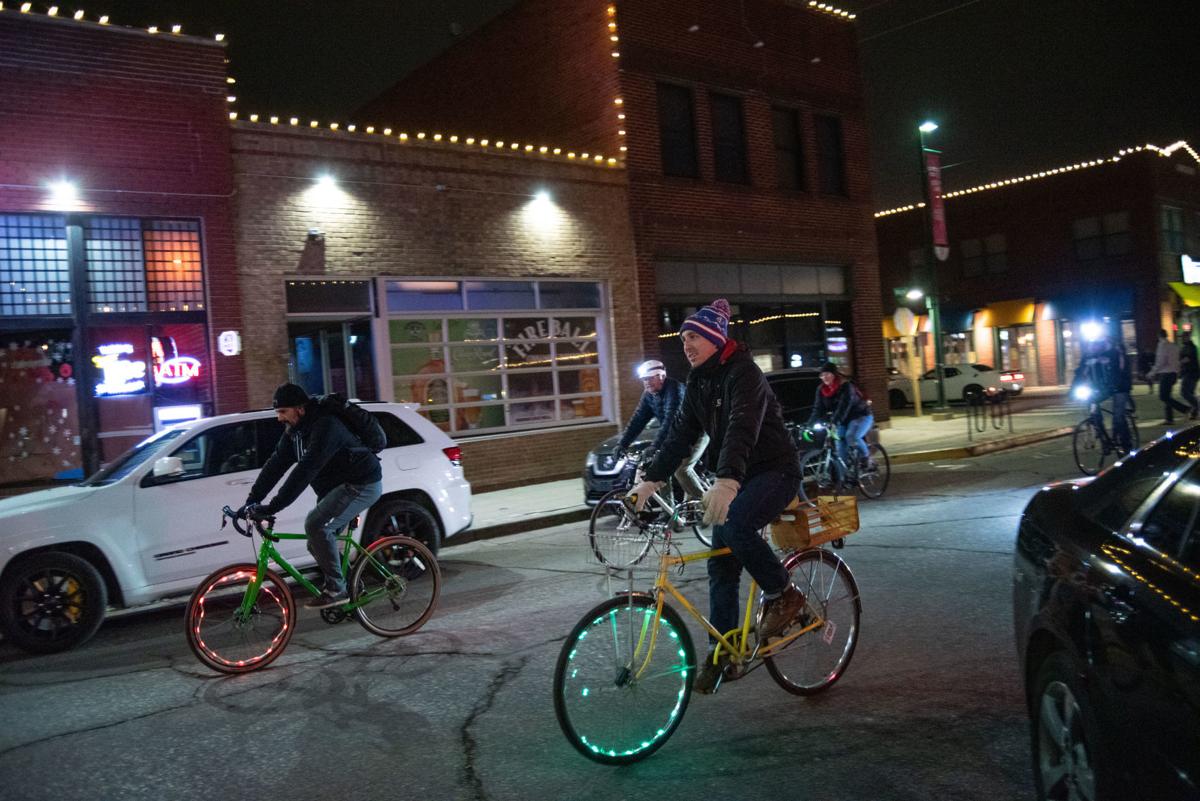 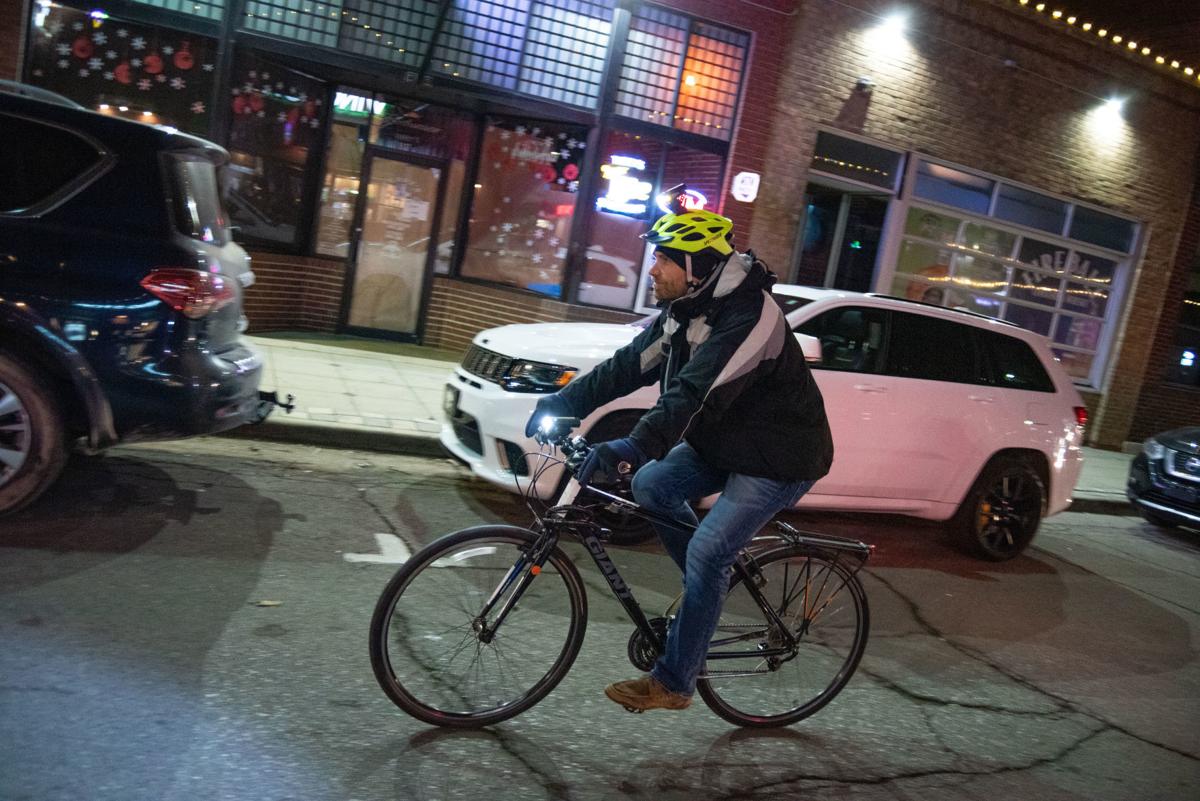 Pryor rides his bike down Moro Street on Friday evening. 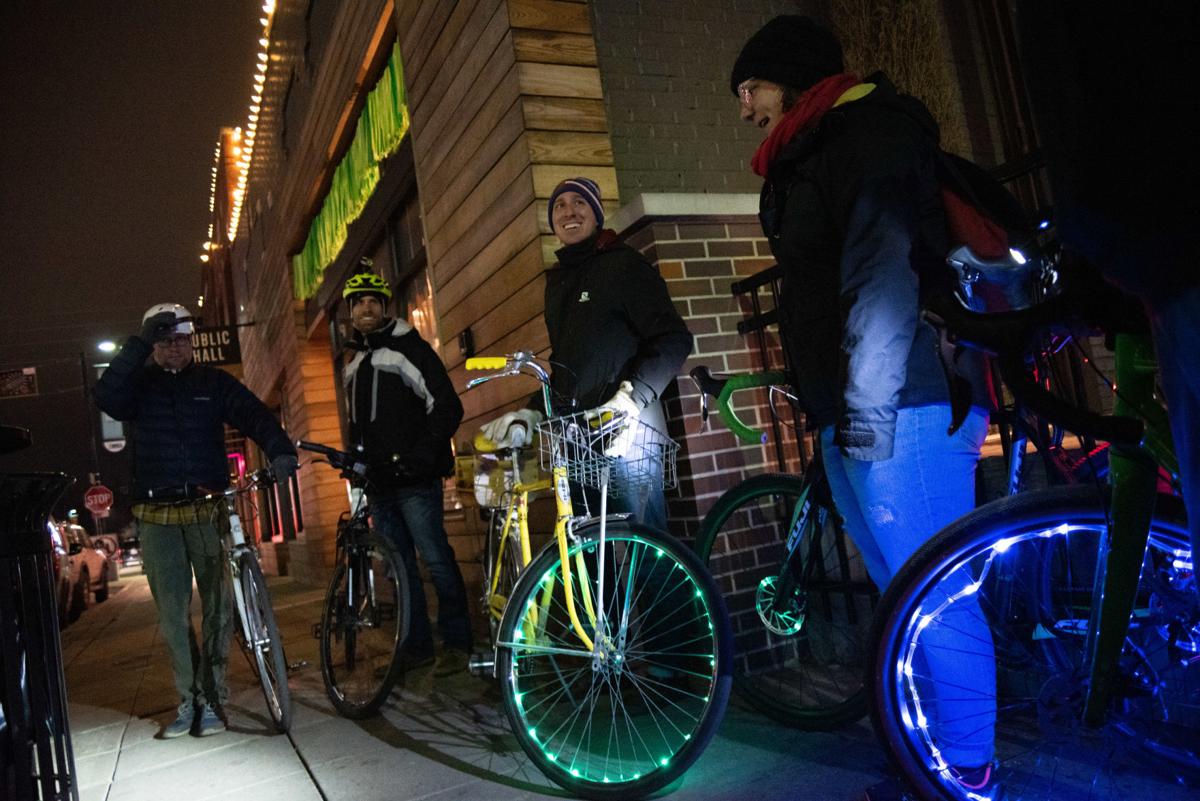 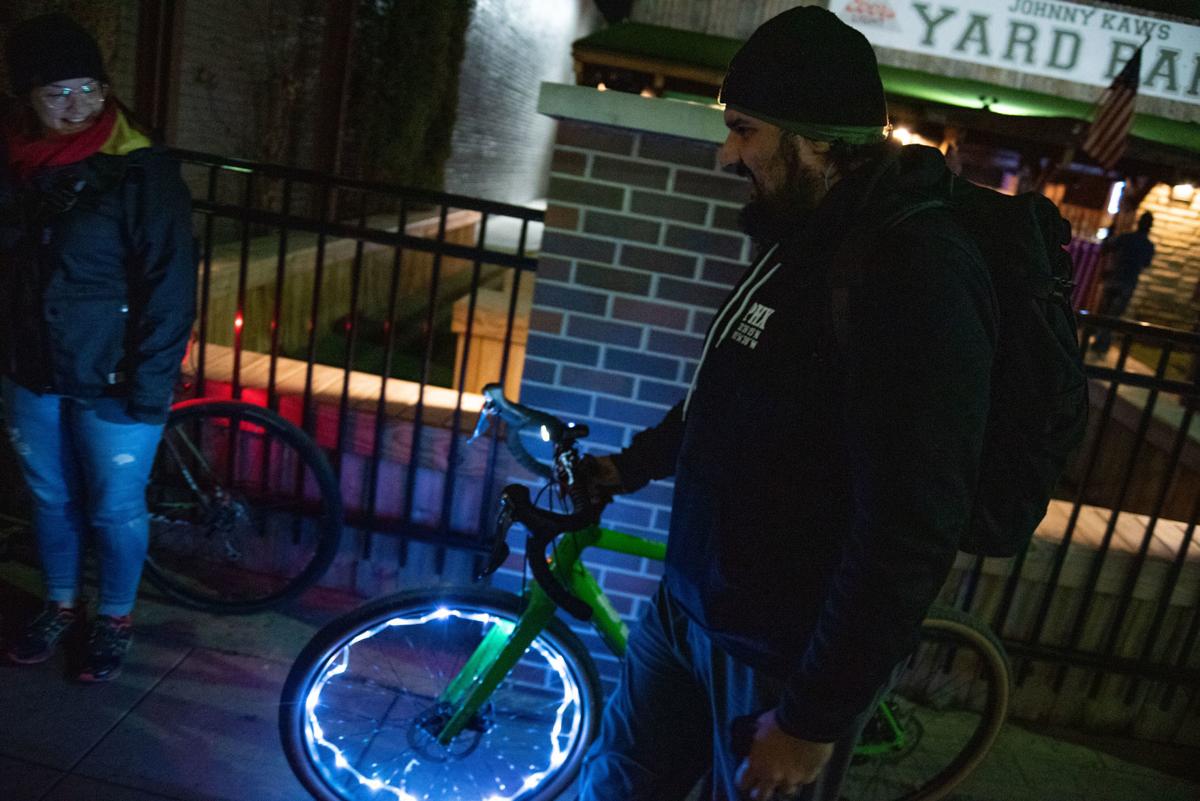 Ron Orchard walks his bike outside of Public Hall alongside Emily Kohlhepp before the Final Friday Slow Bike-Walk.

Pryor rides his bike down Moro Street on Friday evening.

Ron Orchard walks his bike outside of Public Hall alongside Emily Kohlhepp before the Final Friday Slow Bike-Walk.

Whether in the middle of winter or the middle of summer, members of Bike Walk MHK meet without fail every last Friday of the month before setting out on a short bike ride around Aggieville.

They did so Friday night outside of Public Hall, despite many being gone for the holidays, with a handful of people ready to ride. Ron Orchard, the group’s community organizer, said it’s important to show up consistently no matter what so people feel comfortable joining the rides or other events.

Orchard said the group hosts the ride not only as a way to show biking is a healthy, recreational activity but also to advocate for improved and equitable transportation infrastructure in the community.

“It’s just as important for motorists to see that we (cyclists) are here, and it’s one of the times we all feel comfortable,” he said.

Member Carsten Boschen said Bike Walk MHK spreads awareness that biking also functions as a means for transportation because some people, like him and Orchard, do not own cars.

“It seems like the focus is always on cycling as a recreational thing, so I think that the focus should be, ‘How does Manhattan function as a city for someone without a car?’ and the awareness about that,” Boschen said.

Boschen said he lived in Boulder, Colorado, for several years, and the city did well in accommodating those who do not drive through its public transportation system and bike-friendly roads.

“I come from a place and a culture where I could function easily without a car, so I don’t want one,” he said. “I just wish Manhattan was a little more accommodating to get to Dillons and the core centers where you need to go to function as a human being are a bit arduous to get to sometimes.”

Some of the improvements members said they’d like to see are a more direct and safe way for cyclists to travel east and west across town, more bike racks, and clear markings on roads for bikers and drivers.

Compared to the 1980s when there was almost no biking and pedestrian infrastructure in place, Manhattan is doing much better in accommodating those without vehicles, Brandon Kliewer, one of Bike Walk MHK’s founders, said.

Orchard echoed that the city has made strides even within the last few years.

He and his wife, Emily Kohlhepp, didn’t ride their bikes that often when they first moved to Manhattan because they live in the Northview neighborhood and didn’t feel safe crossing near Tuttle Creek Boulevard.

With the more recent addition of Blue River Trail, people can better get in and out of the area.

“I think what makes me optimistic is that we should be able to get (the infrastructure improvements) done here; we’re not like a sprawling city,” Orchard said. “We can totally accomplish that here and do it well.”

Still, Kliewer said, the network of trails and bike-friendly routes in town are not connected in a meaningful way that is practical and not just recreational.

“So if someone lived on the west side of town, it’s almost impossible to ride to the Hy-Vee downtown or go to City Hall without having to take some risks on some unsafe biking roads,” Kliewer said.

Kliewer served on a steering committee to help develop a bicycle and pedestrian systems plan for the city, which commissioners will discuss on Jan. 28.

Part of the plan addresses building a network of routes so people have access to things like trails and sidewalks to safely travel across the city.

In the meantime, Orchard said Bike Walk MHK is starting to prepare for the city’s Bike Month with its Coffee Cruise, which shows people how to safely bike to coffee shops around town, kicking off events on May 2.

It’s also developing an education program, "MHK Bike Safety and Commuting," for those interested in using their bikes as a mode of transportation, which will show people how to safely ride on roads and help them become comfortable riding the routes they’d use.

"We've heard from many Manhattan residents that they'd like to have biking play a larger role in their lives, but feel they lack the basic knowledge, skills and surety to safely and confidently ride as a form of transportation," Dominique Saunders, course developer, said in an email. "In alignment with the "Bicycle and Pedestrian Systems Plan," the MHK Bike Safety and Commuting course is being designed to both increase the safety, skill and confidence of cyclists by improving their ability to ride with traffic and heighten awareness among motorists."

The class, which is in collaboration with the city's Parks and Recreation department, is slated to begin some time in April. It will be offered for four weeks with one to two hours in each session. There will be a fee for the course, but scholarships will be available upon request. Further information will be able to be found on Bike Walk MHK’s Facebook and Instagram or its website, which is under construction.