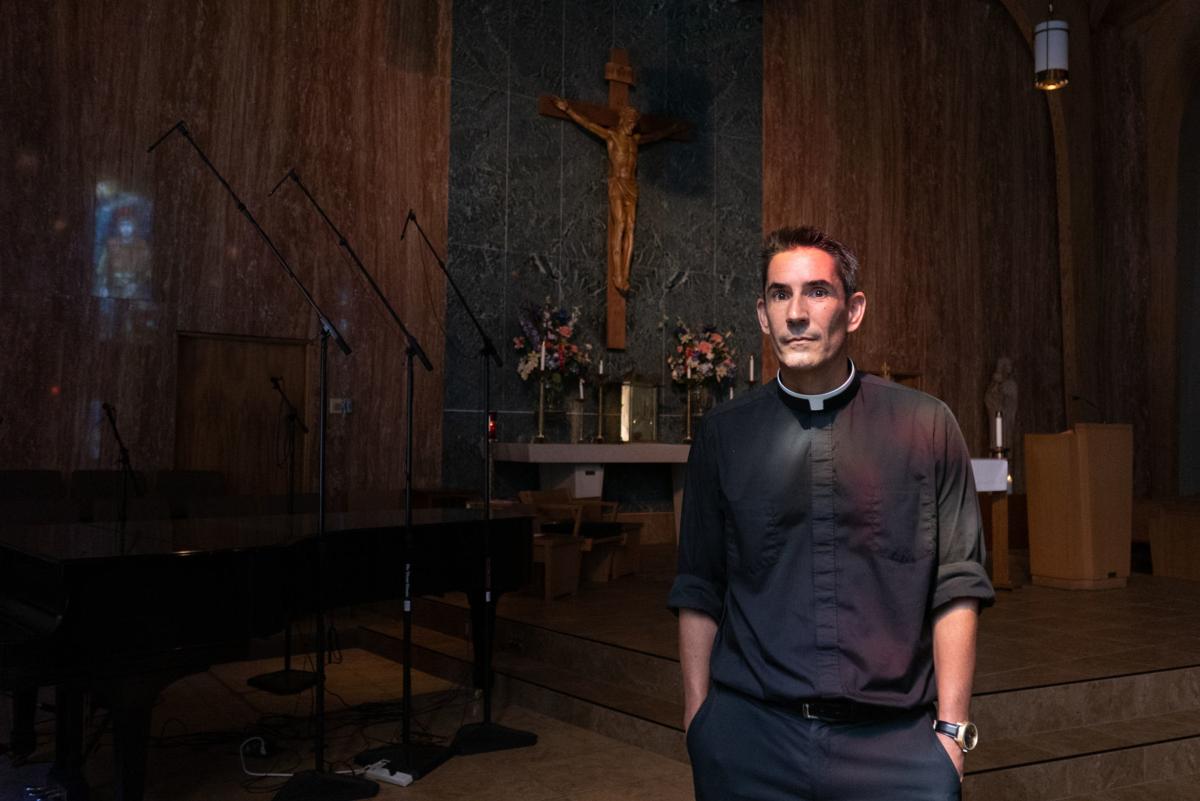 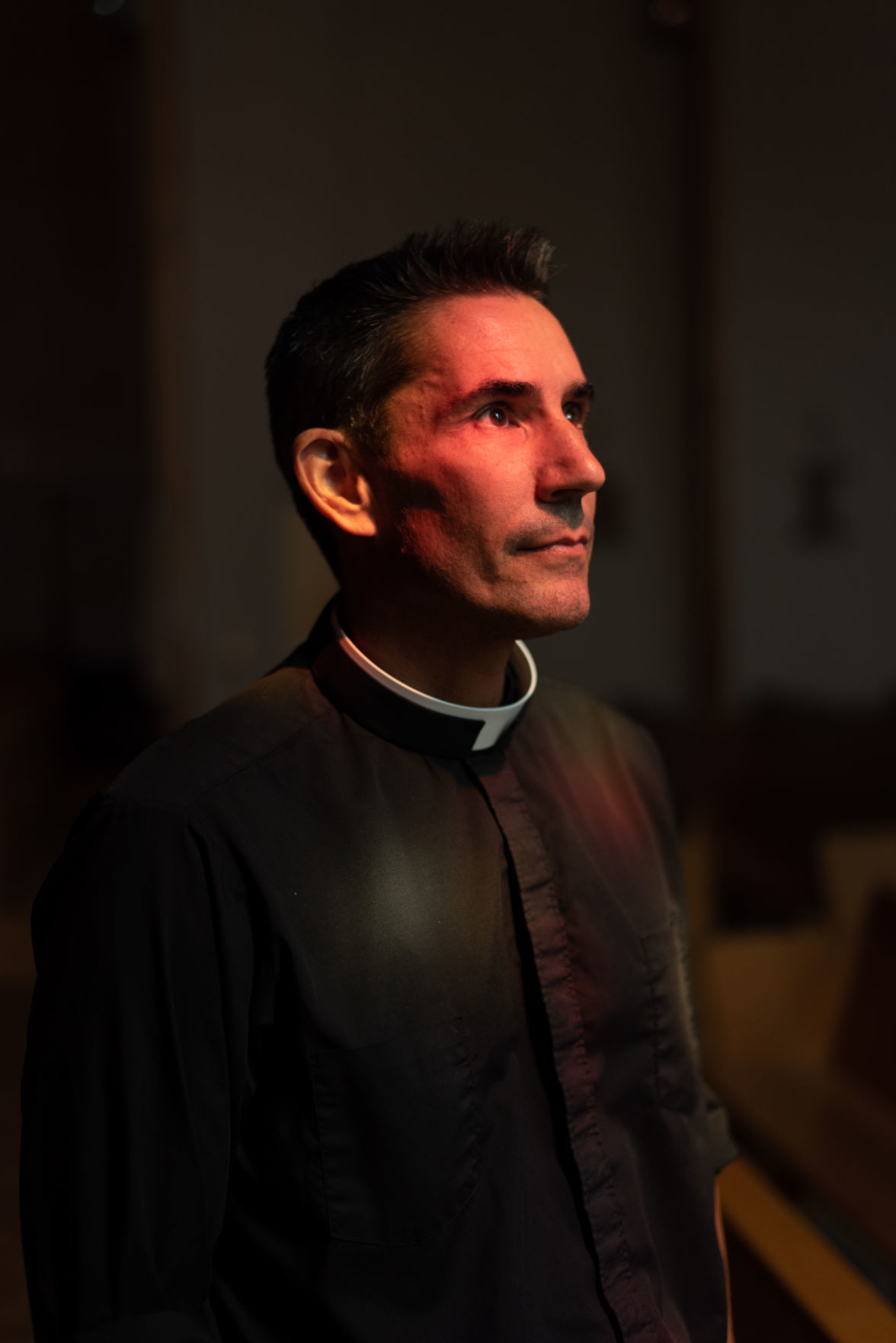 The Rev. Gale Hammerschmidt stands for a portrait in St. Isidore’s Catholic Student Center on Wednesday. 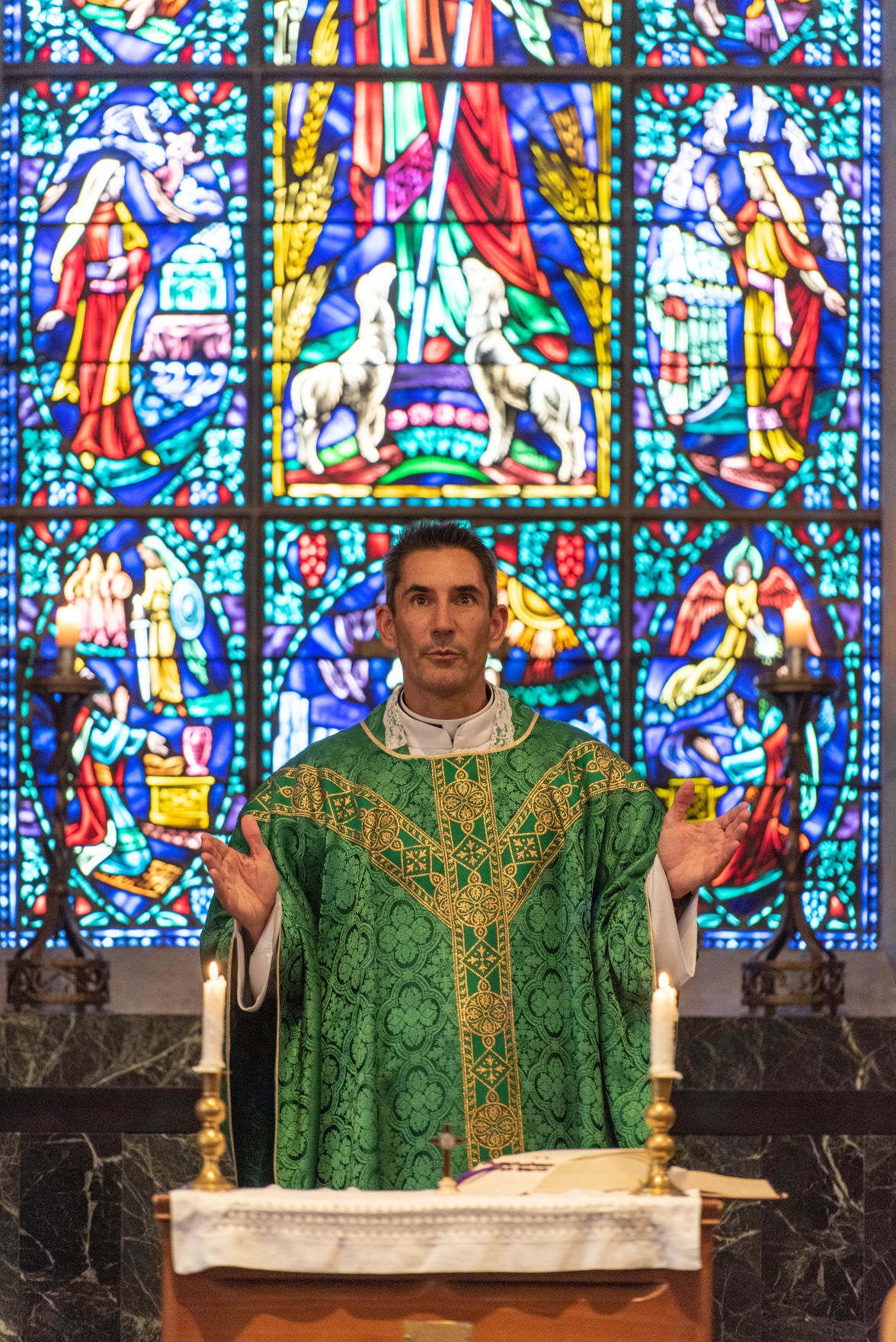 The Reverend Gale Hammerschmidt leads mass with missionaries and K-State students in Danforth Chapel on Wednesday. 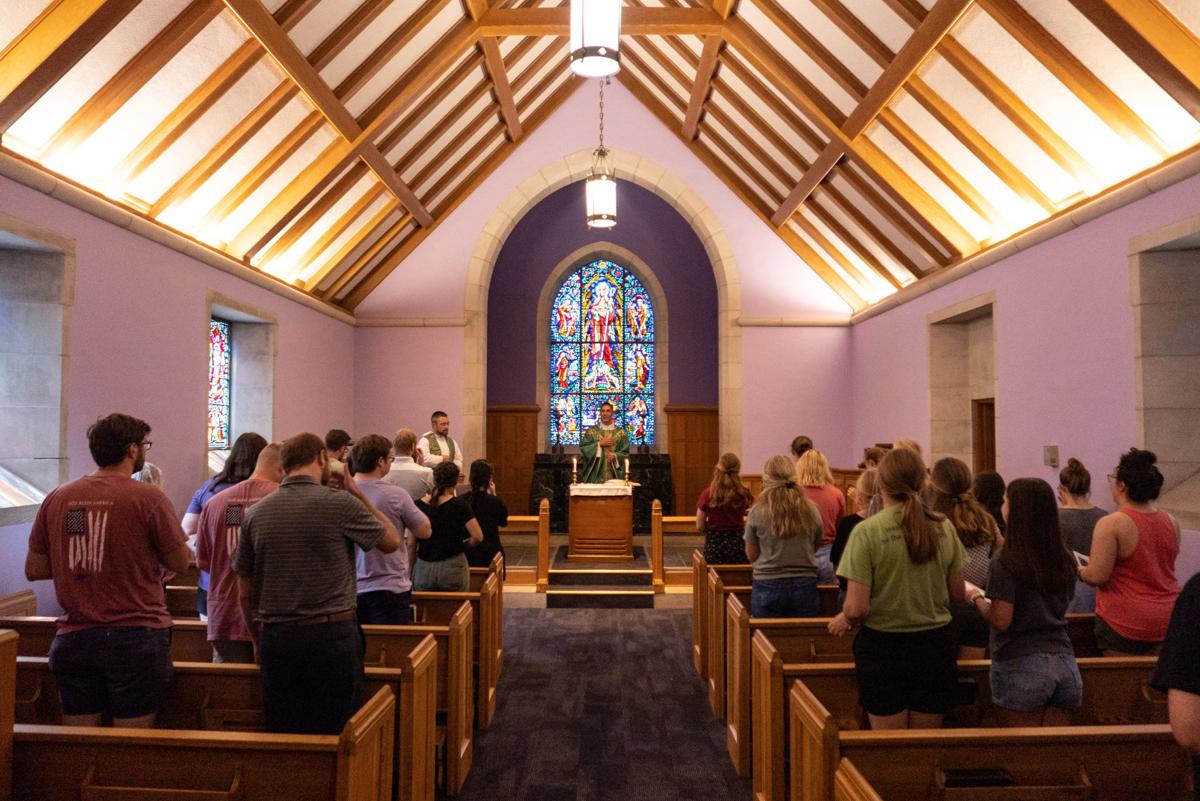 Hammerschmidt leads Mass with missionaries and K-State students in Danforth Chapel at K-State on Wednesday.

Inside the lobby area adjoining the sanctuary at St. Isidore’s Catholic Student Center, the K-State students were singing the “everybody let’s go” snippet from the Dora the Explorer song.

The Rev. Gale Hammerschmidt, 48, was about to lead them over to All Faiths Chapel, which is at the heart of the college campus, for a noon Mass. But first, he came out to greet the few dozen students who make the Catholic student center a refuge from the stress of college life.

Between meetings and Masses and meditative praying, it’s these small encounters that give Hammerschmidt life, he said. For the students, Hammerschmidt’s easygoing, fun-loving personality makes the center “a home away from home.”

“It sounds cliché but having a place like this has been really important,” Grace Leonard, a sophomore from Wichita, said. “I know I can come here for a safe place, a loving environment and a supportive community. This place that Father Gale creates here is a stable constant for all of us students going through so many transitions.”

Hammerschmidt said he recognizes the influential role he plays as a college student minister.

“I work with a population of students who are making some of the most important decisions of their life,” Hammerschmidt said. “Who will they be? What do they believe? How will they live their lives?”

They’re decisions Hammerschmidt made himself when he was an undergraduate at K-State. A Hays native, his family had always been big K-State fans, and he graduated in 1995 with an education degree. It wasn’t until he started teaching seventh- and eighth-grade history at Manhattan Catholic Schools that he started to find a deep connection with his faith.

“I wouldn’t say I was super faithful in my college years,” Hammerschmidt said. “A lot of it came when I started teaching at the Catholic school and I had good people around me to call me out of my waywardness. Even in the early years of my teaching, I was still a little wayward in the decisions I was making. Yet, through the people that were surrounding me in the schools, I realized that my life lived for Jesus. He’s brought me far more happiness than living for myself.”

Hammerschmidt also served as an adult sponsor for high school mission trips, and that also played a major role in helping him “see the light.” In 2005, he set off for St. John Vianney Theological Seminary in Denver, where he spent seven years earning a master’s degree in divinity with a heavy load of philosophy classes, he said.

In comparing his experiences, Hammerschmidt said his time in the seminary was like his time at K-State. The Denver seminary focused on men who already had college degrees, he said, so most of the seminarians ranged from 22 to 33, which is the age Hammerschmidt started.

The seminarians followed a college-like class schedule, he said, but there also were communal times for the 120 or so seminarians to eat, pray and attend mass together. Beyond that, they studied, worked out and watched movies like other college students.

“Not as many girls at the seminary,” he said with a laugh. “Otherwise, it was a lot the same. It was a lot of fun, a lot of laughter. We were surrounded by incredible men who were striving for holiness and looking as to whether or not God was calling them to be priests.

“College can be a selfish time for people,” he continued. “Seminary was a training in how to be selfless.”

Hammerschmidt was ordained a day before he turned 40.

“Some guys buy fancy sports cars as a mid-life crisis,” Hammerschmidt said. “I became a priest.”

His first assignment was at Sacred Heart Cathedral in Salina, and he was put in charge of Hispanic ministry. He also was chaplain of the parish’s high school for three years, before he was reassigned to St. Francis Xavier in Junction City. He spent two years there before returning to the Little Apple in 2016, this time as a priest.

Working with college students is different than what he did in his previous posts, Hammerschmidt said.

“A lot of people imagine the priesthood to be a lonely life, because we can’t have children or we can’t get married, but it’s the furthest thing from it,” Hammerschmidt said. “We often talk about our desire to have more alone time because we’re always surrounded by people.”

Every morning, between 20 and 30 students will crowd his office just to check in and talk about the previous day, and dozens more will stop by and say hello while they visit the student center to pray. The afternoons are filled with meetings, with a short break Hammerschmidt uses to work out, and evening classes usually fill out his schedule until 8 p.m., when he hears confessions for an hour.

At 9 p.m., he offers Mass, and he hangs out with the several students who linger afterward until 11 p.m. or so, he said. They occasionally go to IHOP or Old Chicago.

“It’s beautiful getting 150 college students to come to a Mass,” he said. “There’s no obligation to be there for them, but they come because they desire to pray in that way. The Mass is the highest form of prayer, and so students desire to be a part of it.”

On Sundays, so many people come to church that lately, St. Isidore’s has had trouble fitting them in. That’s why the church is finalizing a $17 million campaign to expand the center and rebuild the chapel. Hammerschmidt said the center still needs about $3.5 million, but workers will break ground in spring 2021 and hopefully complete construction by fall 2022.

With a highly transient student congregation, Hammerschmidt will tour parishes across the state over the next two months to raise funds for the project.

With a 24/7 schedule, the priesthood requires a lot more involvement than when he was a history teacher, Hammerschmidt said, but he’s loved the challenge.

“When I was a teacher, I realized that I could be happy as a priest,” he said. “I was investing in lives of children who were not my own. I was coaching and teaching them, and when they experienced success, I experienced great joy. There’s a lot of that in the priesthood. When I see someone come to a deeper encounter with Christ, I experience a similar, greater joy.”

But being able to that at his alma mater, it’s something special he thanks God for, Hammerschmidt said.

“I love it,” Hammerschmidt said. “I am unworthy of this blessings I have received. This assignment in this city in this place I love more than anywhere else in the world, I’m so unworthy. I know I’m not perfect, but the Lord continues to look after me and bless me, and I’m so grateful to God.”

Back from meeting at Vatican, bishop shares what he heard from Pope Francis

Bishop Jerry Vincke isn’t much of a coffee drinker, but when he met with Pope Francis earlier this month, he had his fair share of cappuccinos…