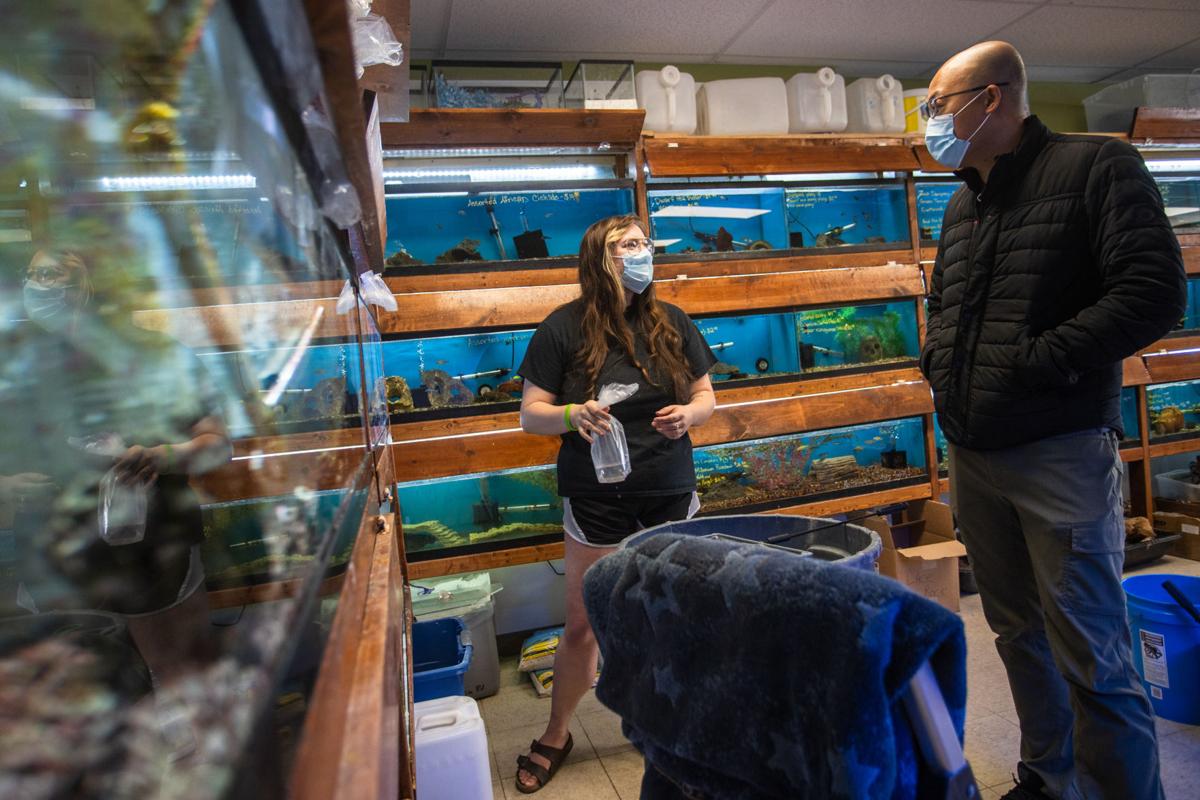 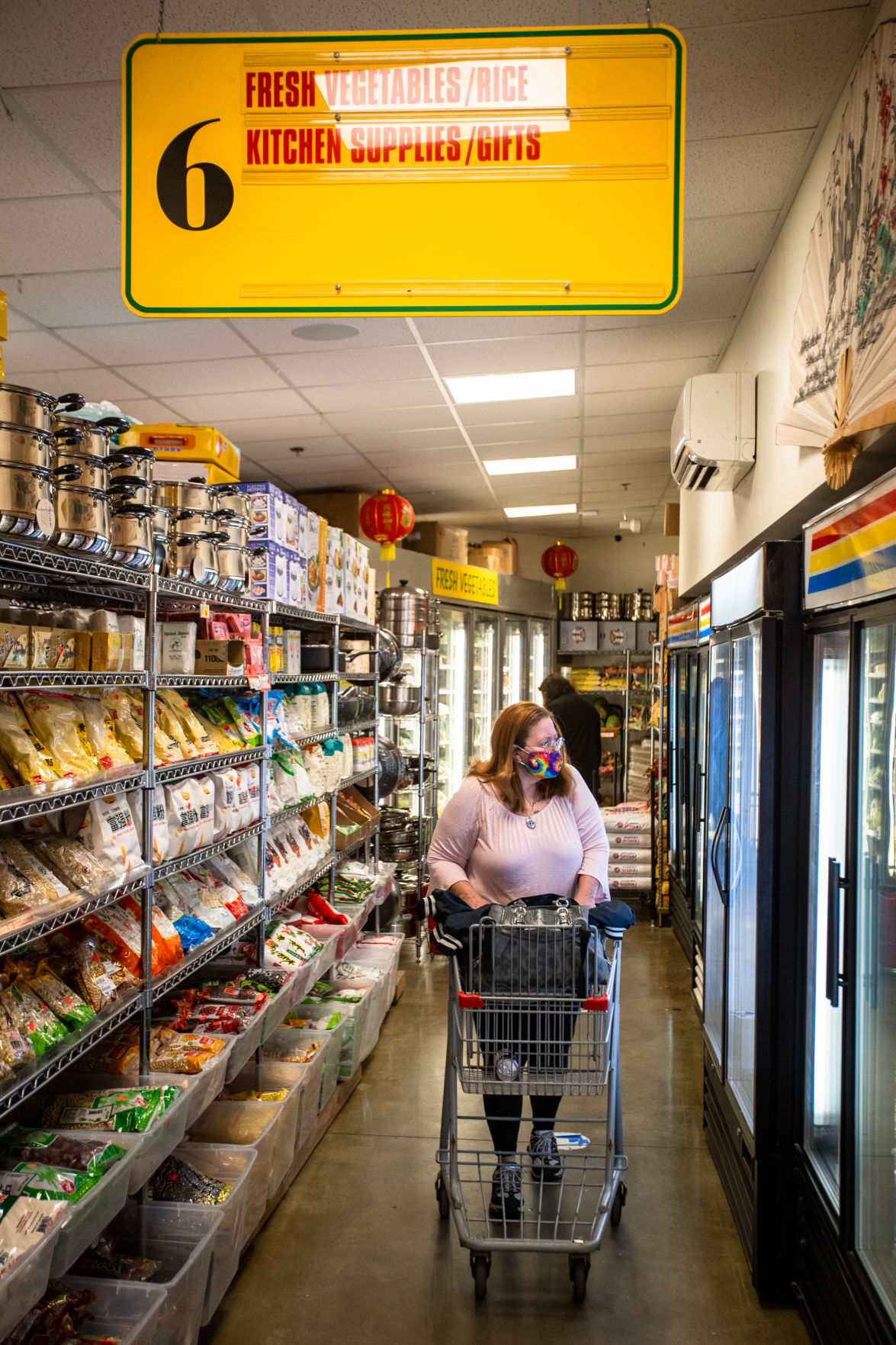 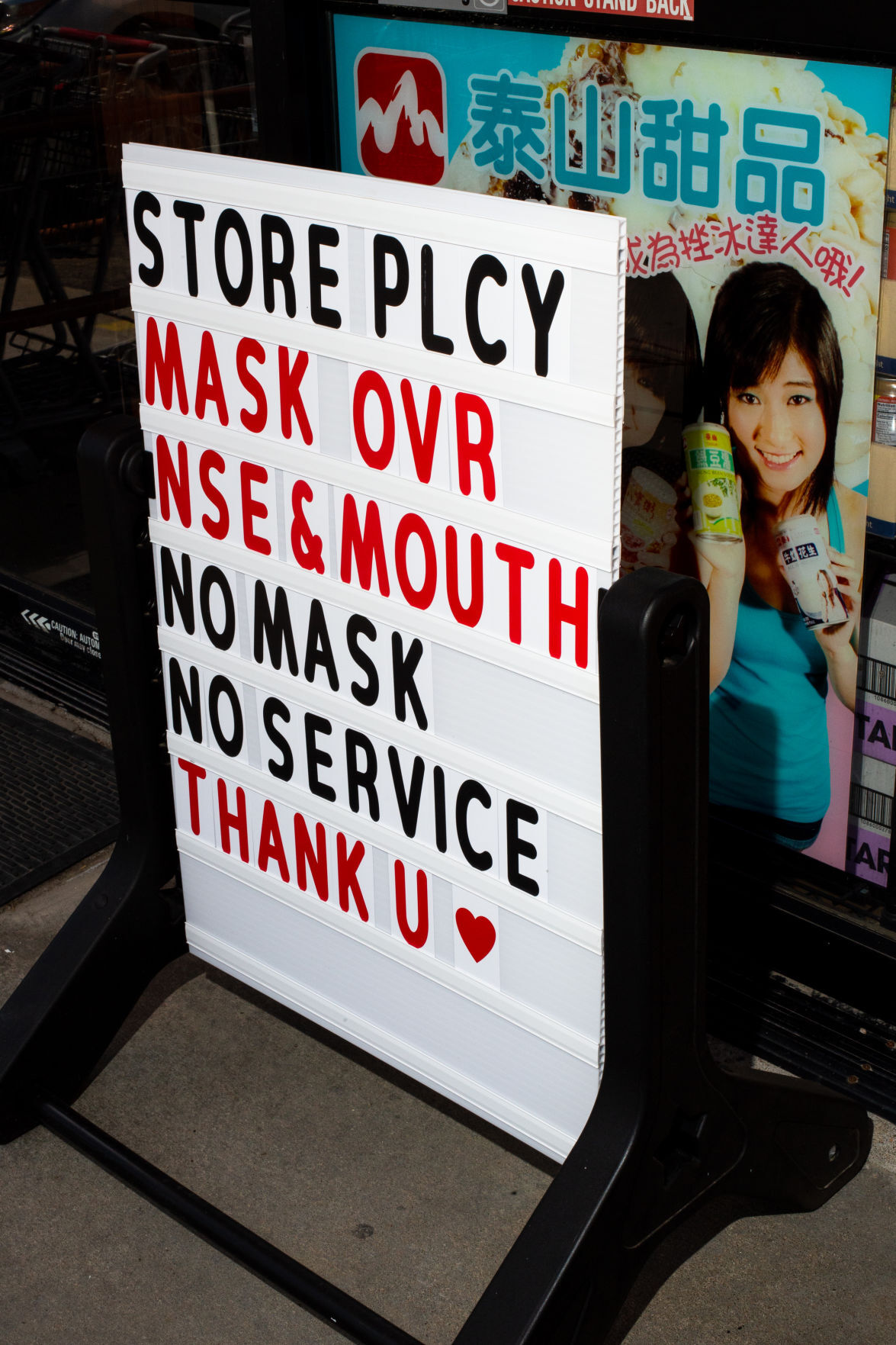 A sign at Mama Fang’s Asian Market instructs customers to wear masks over mouths and noses upon entering the store.

A sign at Mama Fang’s Asian Market instructs customers to wear masks over mouths and noses upon entering the store.

Some Manhattan business owners have reported an uptick in incidents involving customers who do not want to wear a mask.

In the last two weeks, Mama Fang’s Asian Market has experienced three cases of store patrons refusing to wear a mask and “causing a scene,” said Fanny Fang, who manages the market with her two siblings.

A sign in front of Mama Fang’s clearly outlines the store policy, implemented early in the pandemic, that requires masks be worn inside, yet she said she was met with hostility by people who are typically pleasant regular customers.

Fang, 25, spoke about an incident on April 24, when a woman became angry over being asked to wear her mask. Fang said the woman tossed her items on the floor, walked outside and began recording the front of the business. The store’s security cameras record both video and audio, so Fang said she could hear the woman refer to store employees as “communist Nazis.”

“That’s not even a good insult,” Fang said.

She said the woman was of Asian descent, was a patron of the store previously and had not had any issues wearing a mask in the store before April 24.

“We’ve always been public and adamant about wearing a mask; we were the first business in town to require that,” Fang said. “Yet all of a sudden, on that Saturday when it was super busy, they decided they wanted to pick this fight.”

Fang said she hears from other business owners in Manhattan who are subject to similar harassment for their policies. One example also occurred April 24, when a patron of Sunflower Natural Pet Supplies left a negative review of the business on Google. The customer’s review states she was “extremely disappointed” by how she was treated.

Mike Bonella, the owner of Sunflower Natural Pet Supplies, said the customer yelled at his 14-year-old daughter for being asked to wear a mask.

“There has definitely been an increase of incidents where people walk in without a mask,” Bonella said. “I think people are just tired and ready to move on, even if it’s not the right time yet.”

Fang said she understands people might be on edge because of the pandemic, and that they want things to feel more like normal.

“We have tried to be very patient with anyone who comes through our doors, and even with people who don’t wear their mask, we try to be patient with them,” Fang said. “Every single person that we had these escalated incidents with, we asked them nicely multiple times to put it on.”

Russ Loub, owner of LABCo (formerly Little Apple Brewing Company), said he has heard his share of negative comments regarding mask-wearing in his restaurant, but the vast majority of people have been respectful of it.

“It’s been a long tough year, and we’re just starting to get our mojo back,” Loub said.

Loub said the business’s policy requires people to wear their mask while inside the restaurant, but once they are seated, they can remove it. He said he is just as tired of wearing as mask as others, but he and his staff are “not letting up.”

“We’re still only seating (the restaurant) at 60% capacity, we’re still doing the heightened sanitation,” Loub said. “It’s really like two minutes from walking in the door to getting to a table that they have their mask on.”

Fang said she originally brushed off previous incidents of hateful outbursts from customers. As more individuals receive their vaccinations against COVID-19, the desire for the world to feel like normal becomes stronger, and Fang said that has led to “a wave of entitlement.”

“I think a lot of people are thinking, ‘I sacrificed a year of my life for the greater good, now I get to live my life again,’” Fang said. “And I wish it was that simple; for us being frontline workers, trying to provide food for the community, it’s exhausting, and the last thing we need is confrontations like this.”

Connie Briggs, co-owner of BodyFirst Wellness and Recreation Center, said her regular clients are thankful for the mask rule being enforced at the massage clinic and health and fitness business. She said the business has experienced less than a half-dozen incidents of “incredibly rude” patrons whom she did not recognize as being members of her facility.

“I’ve lived in Manhattan a long time and never seen those folks before,” Briggs said. “I must say, the community as a whole has been incredibly nice.”

Briggs said the masking situation with her business is different, as it’s considered a basic hygiene issue for her staff. She said her employees will continue wearing masks, especially as part of the massage therapy services, and she said her clients know mask-wearing will be part of the standard operating procedure for the time being.

Early in the pandemic, Fang hired a security guard to make sure the mask rule was enforced, and Fang’s family has filed criminal trespass advisories against a few individuals who caused ruckuses in the store. Fang said if those individuals return, they can be officially charged.

The citywide mask mandate remains in effect until midnight May 16, after commencement ceremonies for K-State and Manhattan High School are over. However, businesses may continue to uphold their own mask rules.

Fang said at the request of her family and other local business owners, the Riley County Police Department tweeted on Monday that “private businesses may still require customers or visitors to wear masks even after mask mandates are lifted,” similar to the “no shirt, no shoes, no service” policy.

“We have deemed that wearing masks has kept our employees safe, kept our customers safe, and we’re going to continue to do that as long as we feel like it’s necessary,” Fang said.

One of the 50 cultures represented in the aisles of Mama Fang’s is Indian. Right now, India is battling a vicious second wave of COVID-19 infections, with new cases reaching about 400,000 a day. Cremation workers cannot keep up with the number of dead, and the New York Times reports the skies over some of India’s biggest cities are tinted gray by the ash from burning bodies.

Fang said if she were to stop enforcing a mask policy now, she feels she would be betraying her Indian customers who supported Mama Fang’s after the store briefly closed last April. She said that kind of empathy for each other is something we are all capable of.

“If I have customers telling me they have relatives dying in India, or they may never get to see their parents again. … I don’t need to experience that myself to know how painful that is, because I believe them,” Fang said.