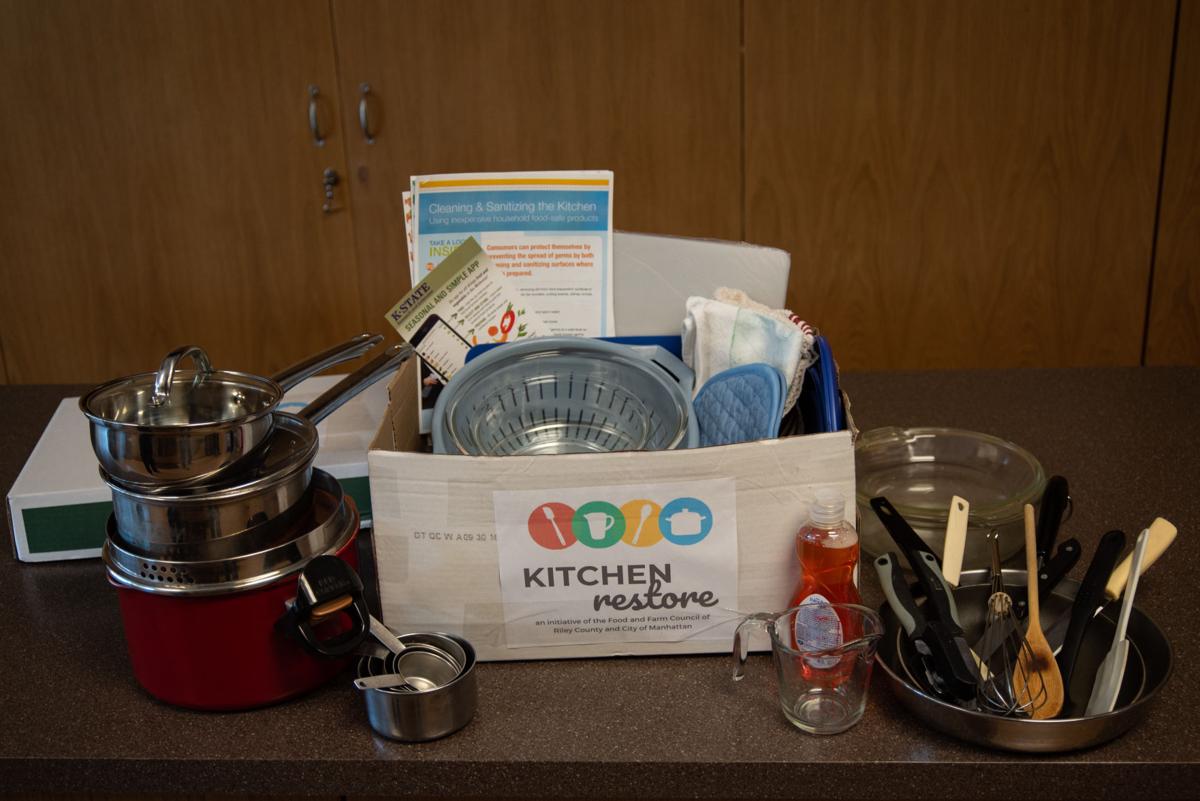 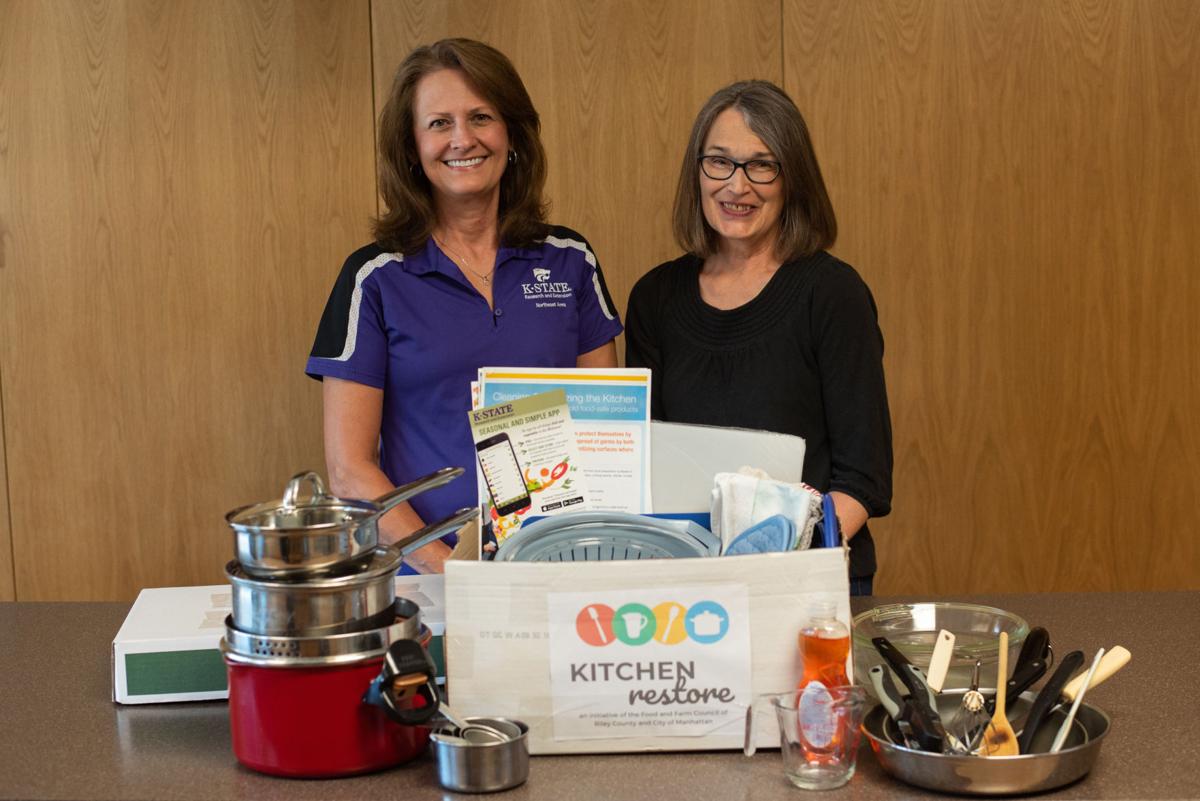 Sharolyn Jackson, left, and Sharon Davis, right, stand in front of a Kitchen Restore box at the Kansas Wheat Commission office on Thursday. 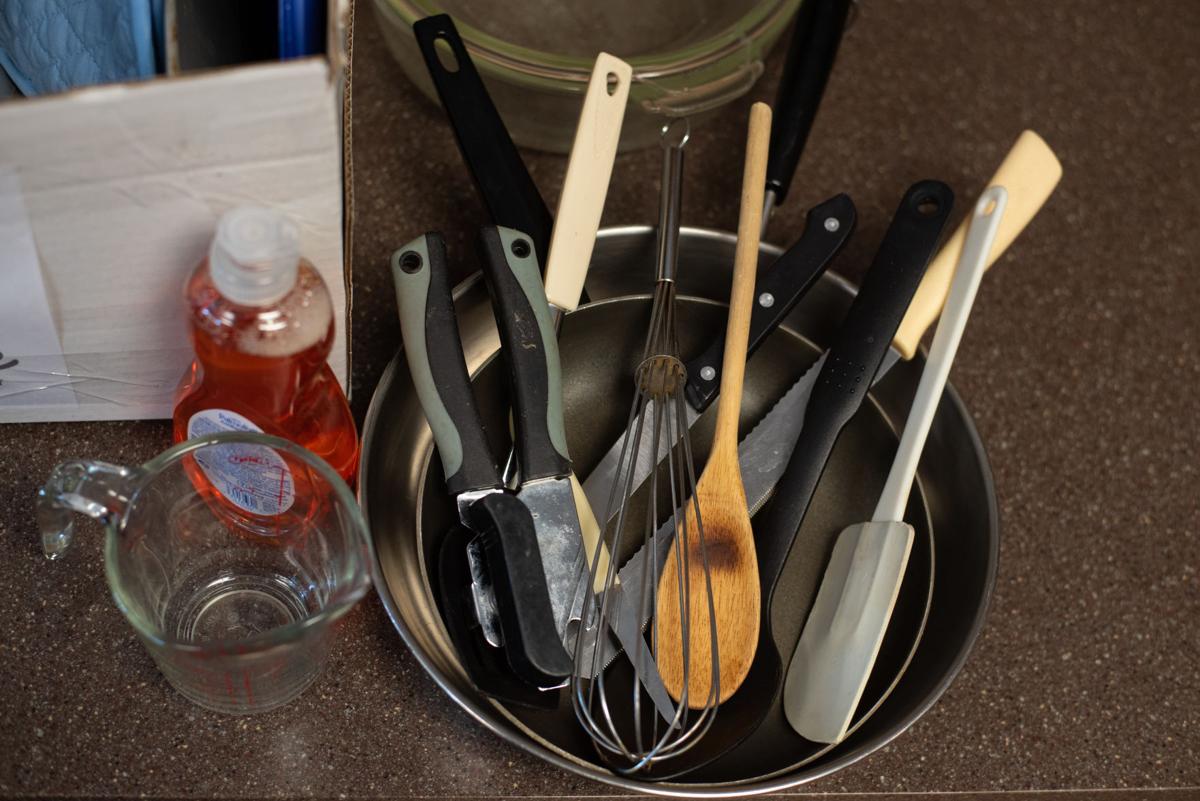 Sharolyn Jackson, left, and Sharon Davis, right, stand in front of a Kitchen Restore box at the Kansas Wheat Commission office on Thursday.

Like a lot of other great ideas, inspiration struck Sharon Davis and Sharolyn Jackson when they were driving around in a car a few years ago.

Area food pantries and agencies were doing a phenomenal job in getting much needed items and nutrition, but the two family and consumer sciences educators, who combined have nearly 80 years of experience in helping people become self-sufficient, figured there was something missing from the equation. It doesn’t help anyone to give people food if those people don’t have the skills or tools to do something with it, the two friends reasoned.

“We’re doing an amazing job in this community in providing food, like Common Table meals, or Harvesters food or Flint Hills Breadbasket,” Davis, program development director for the Home Baking Association, said. “They provide food, but a lot of people don’t know how to handle that food, or maybe they come to a pantry and they walk by black beans. You wonder why they might do that, since black beans are so delicious, and a lot of people might not know how to fix them or they might not want to try something new.

“There’s always good food out there, much more so now, and sometimes, I think the skills and the equipment are what’s missing,” she added.

From those discussions came Kitchen Restore, an initiative of the Food and Farm Council of Riley County and the City of Manhattan. The program finds ways to reuse and repurpose older, gently used kitchen tools and equipment by collecting those materials into kits to give to families or individuals in need. Megan Dougherty, the family and consumer sciences extension agent for Riley County, also heads the program.

A bag of flour or rice from the food pantry isn’t much use if you can’t measure it, mix it or cook it, so the kits include items like measuring utensils, mixing bowls and pots, as well as other basic, starter items to stock a kitchen. Jackson, a family and consumer sciences extension specialist for northeast Kansas, said the organization worked backward to figure out what they would need if they had nothing and wanted to start cooking in a kitchen.

The program gives kits to its partner agencies, like the Manhattan Emergency Shelter and Shepherd’s Way, when they request them.

Standard kits have enough materials for a family of four, although the organization does tailor kits to individual needs as requested by the agencies.

Kits also include lists of resources like the K-State Research and Extension app to look up fruit and vegetable tips and recipes, as well as food safety items on how to handle and prepare food.

Davis estimates that each kit’s value, if its items were purchased at new retail price, is between $100 and $120. But the real value comes from helping families learn to cook at home.

“It’s just a way to get people started, but the real value is that these families can now cook at home,” she said. “They can save thousands of dollars for their families, that’s hard-earned especially right now. That’s what our passion is.”

Davis pointed to Maslow’s hierarchy of needs, which is a diagram that shows how humans can reach self-actualization.

Self-actualization sits atop a pyramid of human needs, but that’s not attainable unless people can meet their physiological basic needs for things like shelter, food, water and air, according to the model.

Jackson joked that that bottom of the pyramid model is shaped like a skillet.

“We start at the base,” she said. “If you never start meeting those needs, you’ll never get to the whole person. Every human being deserves it, that kind of dignity.”

Since the initiative “soft-launched” in the fall, Davis and Jackson said word has slowly spread about the organization and what it provides, and demand has slowly increased. Now that they’ve laid the foundation for the program, they said they hope to grow it and help more families.

Right now, the organization is working out of St. Patrick’s parish hall in Ogden, but the volunteers are looking for a more permanent and centrally located space in Manhattan where they could clean, store and pack kitchen items. Davis said she envisions eventually having a space where the

American home cooking, Davis said, is becoming a lost art, but by starting and growing Kitchen Restore, the hope is that more families relearn that tradition and become more self-sustaining in the process.

Those interested in donating may contact the organization at rckitchenrestore@gmail.com or by calling the Riley County Extension Office at 785-537-6350. The group primarily looks for stovetop and oven cookware, mixing bowls, spoons, can openers, storage containers and similar items but also accepts cash donations to purchase new kitchen items.

Covid-19 antibody treatment may be a test run for vaccine

TikTok: Is the security threat real?