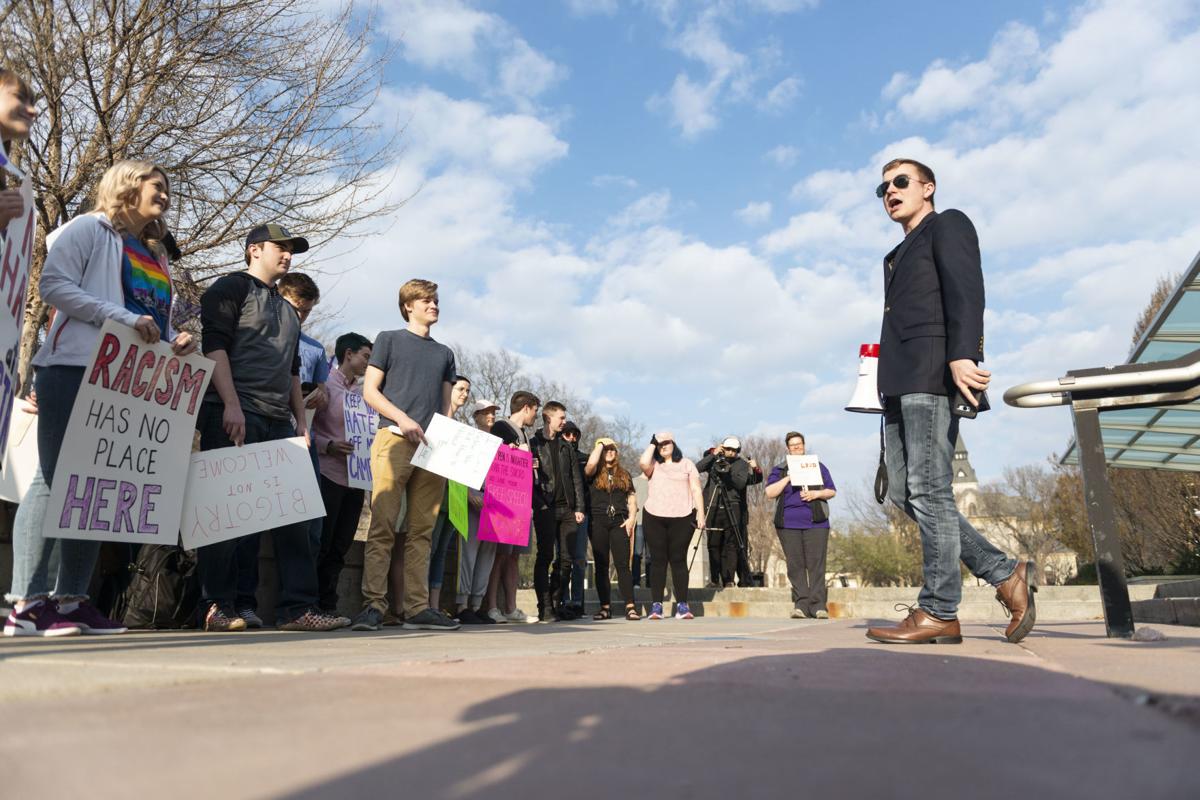 Ian Boyd leads a chant with protesters on April 4 outside of the K-State Student Union against Turning Point USA. Jaden McNeil, then-president of K-State's Turning Point USA chapter, has since created America First Students, which is accused of having white nationalist ties. 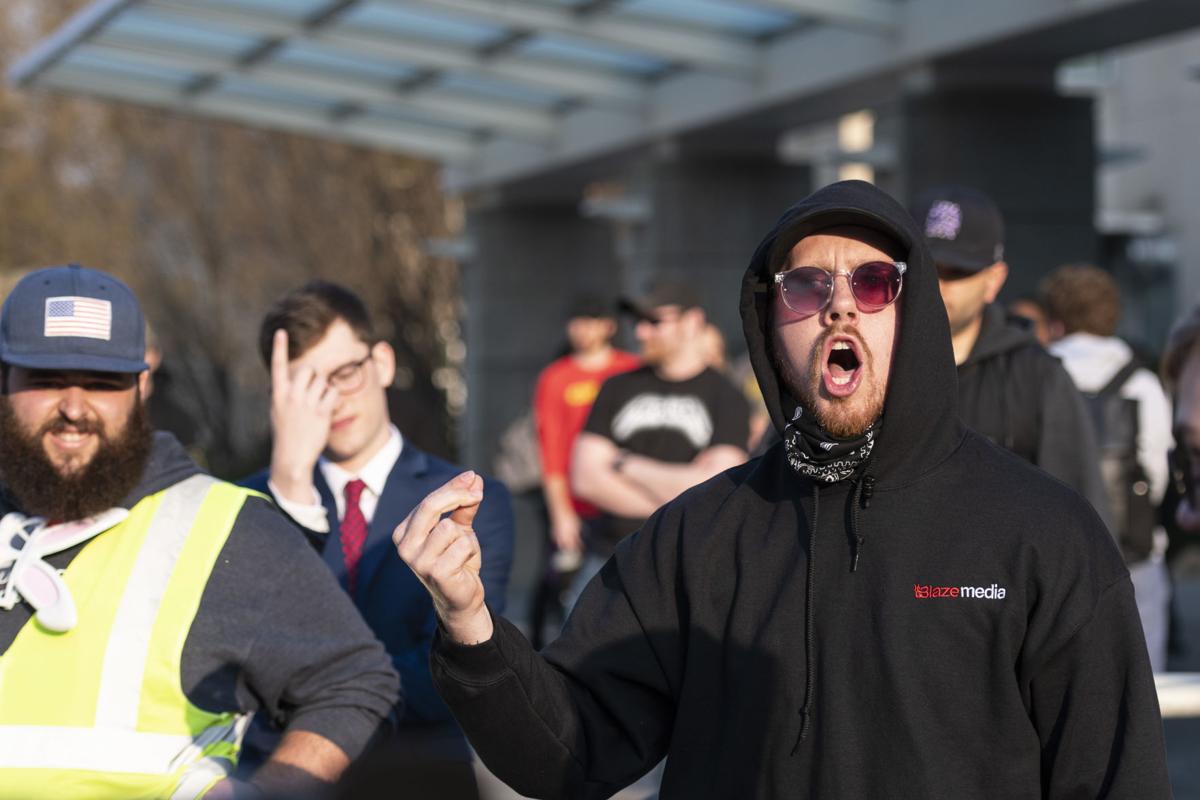 Elijah Schaffer joined protestors on Bosco Student Plaza to discuss the differences between the group and Turning Point USA, to host the “Fight for the First” event to bring attention to conservatives who are being censored online and in the media in April 2019. A new group — America First Students, formed from the remains of the since-disbanded Turning Point USA chapter at K-State — has been accused of being a spearhead for a resurgence in white nationalism in the U.S.

Ian Boyd leads a chant with protesters on April 4 outside of the K-State Student Union against Turning Point USA. Jaden McNeil, then-president of K-State's Turning Point USA chapter, has since created America First Students, which is accused of having white nationalist ties.

Elijah Schaffer joined protestors on Bosco Student Plaza to discuss the differences between the group and Turning Point USA, to host the “Fight for the First” event to bring attention to conservatives who are being censored online and in the media in April 2019. A new group — America First Students, formed from the remains of the since-disbanded Turning Point USA chapter at K-State — has been accused of being a spearhead for a resurgence in white nationalism in the U.S.

K-State officials Wednesday reaffirmed the university’s commitment to free speech in response to a report from an advocacy group that links a new student organization to a white nationalist movement.

Vice president for communications and marketing Jeff Morris said that the university does not have any explicit regulations against white nationalism since it cannot control political viewpoints.

“Kansas State University has a long and proud history of commitment to free and open inquiry, deliberation and debate in all matters,” Morris said. “Every member of the university community shares in the responsibility for maintaining a climate of mutual respect, but the university cannot censor or punish student expression based on political viewpoint.

“The university offers many resources to assist students, faculty and staff regarding our values and freedom of expression to foster a climate of respectful dialogue,” he continued.

The Institute for Research and Education on Human Rights issued the report. It alleges that America First Students, a K-State group formed from the remains of the university’s former chapter of Turning Point USA, is the latest in a coordinated spread of a white nationalist movement.

The group held its first meeting in January. White nationalist figures like Nick Fuentes, a YouTube personality who hosts a podcast called America First, and Patrick Casey of the American Identity Movement have tweeted their support for the group.

The American Identity Movement, previously known as Identity Evropa, summarizes itself on five principles: nationalism, identitarianism, protectionism, non-interventionism and populism. But the group has been classified a hate group by the Anti-Defamation League and the Southern Poverty Law Center, and Casey, the executive director of the group, has previously argued that the U.S. needs to keep a “European-America super-majority” in order to keep its American identity.

The IREHR, which produced the report on white nationalism and its ties to the K-State group, describes itself as a “social justice organization dedicated to standing against bigotry and defending democracy and human rights.” The institute examined social media activity as well as chats between the leaders of the movement.

America First Students, the K-State-based organization, has pushed what is called the “groyper” movement, the report said. That movement, made up of people dissatisfied with what they consider to be a lack of action against perceived threats against a white American identity from traditional conservativism, has pushed alt-right stances like anti-immigration policies.

America First Students was founded by Jaden McNeil, a sophomore in political science at K-State. McNeill was formerly the president of K-State’s chapter of Turning Point USA, another national student organization aimed at promoting conservative ideals on campus.

Last year, K-State’s chapter of Turning Point lobbied the K-State Student Governing Association to allocate $3,000 in student privilege fee funding to bring three conservative commentators to campus. Those speakers were met by protests from groups like the K-State Young Democrats, who accused the group of bringing racism and hatred to the campus.

But McNeil and other chapter leaders grew dissatisfied with the national organization, claiming that Turning Point USA at the national level “ceded cultural ground” to the left as it focused primarily on economic issues. They disbanded the K-State chapter, and McNeil began sharing information about “groyper” events with Fuentes and Casey as speakers. “Groyper” is a term that is used by alt-right and nationalist organizations.

In January, McNeil founded America First Students. The group registered with K-State, and its organization description states that it stands “in defense of Christian values, strong families, closed borders, and the American worker.”

Soon after announcing the new organization, McNeil told The Gateway Pundit, a conservative blog, that the group would focus on building its campus presence this semester before looking to expand elsewhere.

The IREHR report said that white nationalists have used groups like America First Students as a form of “entryism,” which describes attempts to present a more moderate appearance to attract students to the more extreme ideology. The movement has used its sizable social media influence and friendly conservative voices to boost their reach.

“Though McNeil lacks the same lengthy paper-trail of explicit white nationalism as that of Fuentes or Casey, he has already signaled his affinity with such ideas,” the IREHR report read.

McNeil did not respond to multiple Mercury requests for comment, but he claimed Tuesday on Twitter that a Kansas City Star story on the IREHR’s report was a “thoroughly libelous hit piece” as part of a “coordinated campaign to silence America First Conservatives,” although he did not specify what he found to be incorrect in the report.

On Wednesday morning, he followed up his tweet, quoting the IREHR’s statement that McNeil has demonstrated an affinity for white nationalist ideas.

“This comes from the original source material quoted throughout the hit piece,” McNeil said, while not explicitly denying the claims. “They have 0 evidence to back any of their baseless claims.”

What is white nationalism?

White nationalism describes several movements that generally advocate for what they consider to be America’s traditionally white identity and heritage. As such, white nationalists advocate against intermarriage between races, multiculturalism and nonwhite immigration, which they believe are threats to the white population’s status as the majority demographic especially as the country has become increasingly diverse.

White nationalism differs from white supremacy, which explicitly argues that non-white races are inferior to whites, although there is overlap between the ideologies.

A K-State student who was accused of having ties to white nationalism in an advocacy group’s report last Tuesday is saying those claims are false.

You can now buy a bobblehead of Dr. Fauci