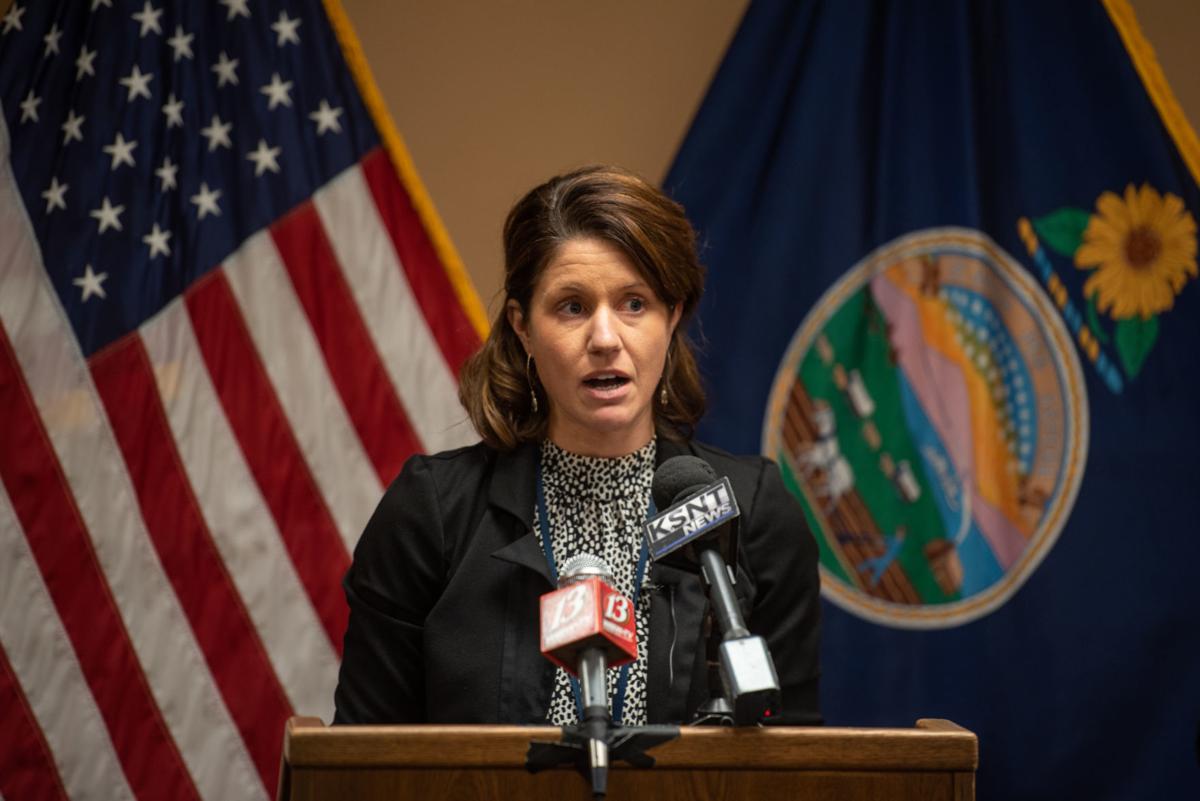 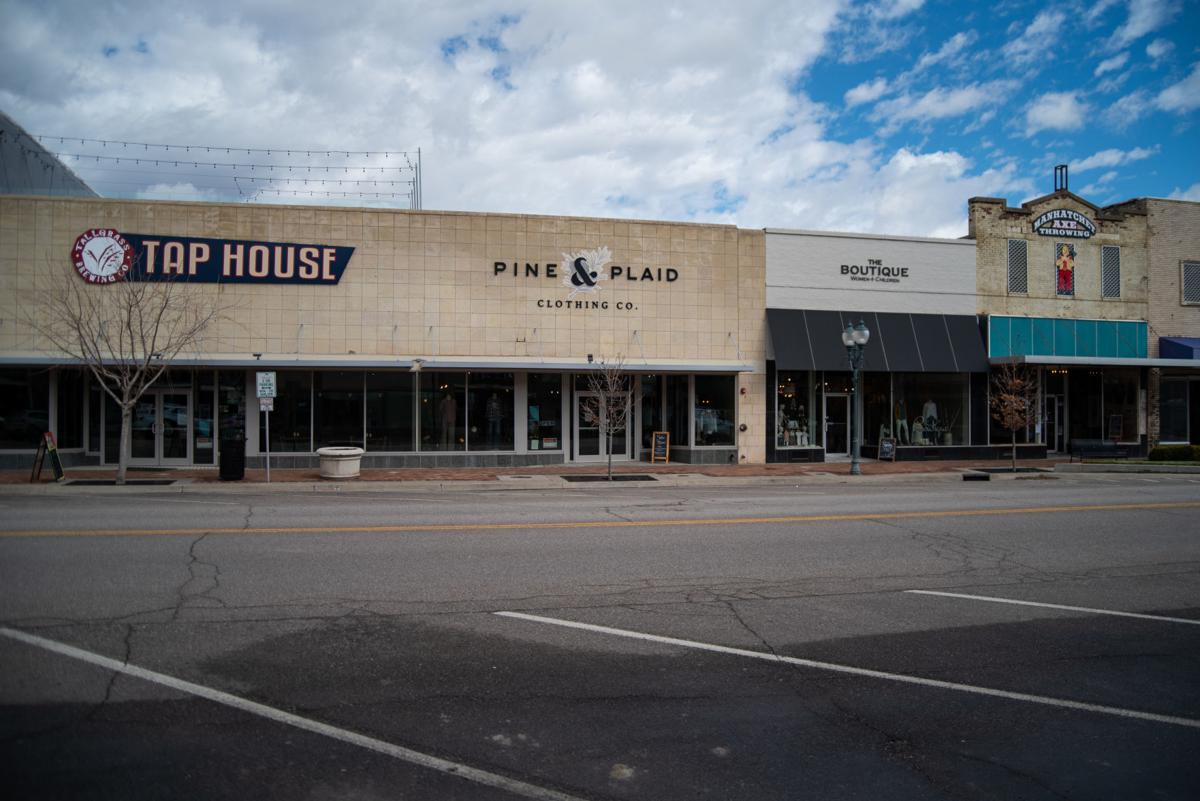 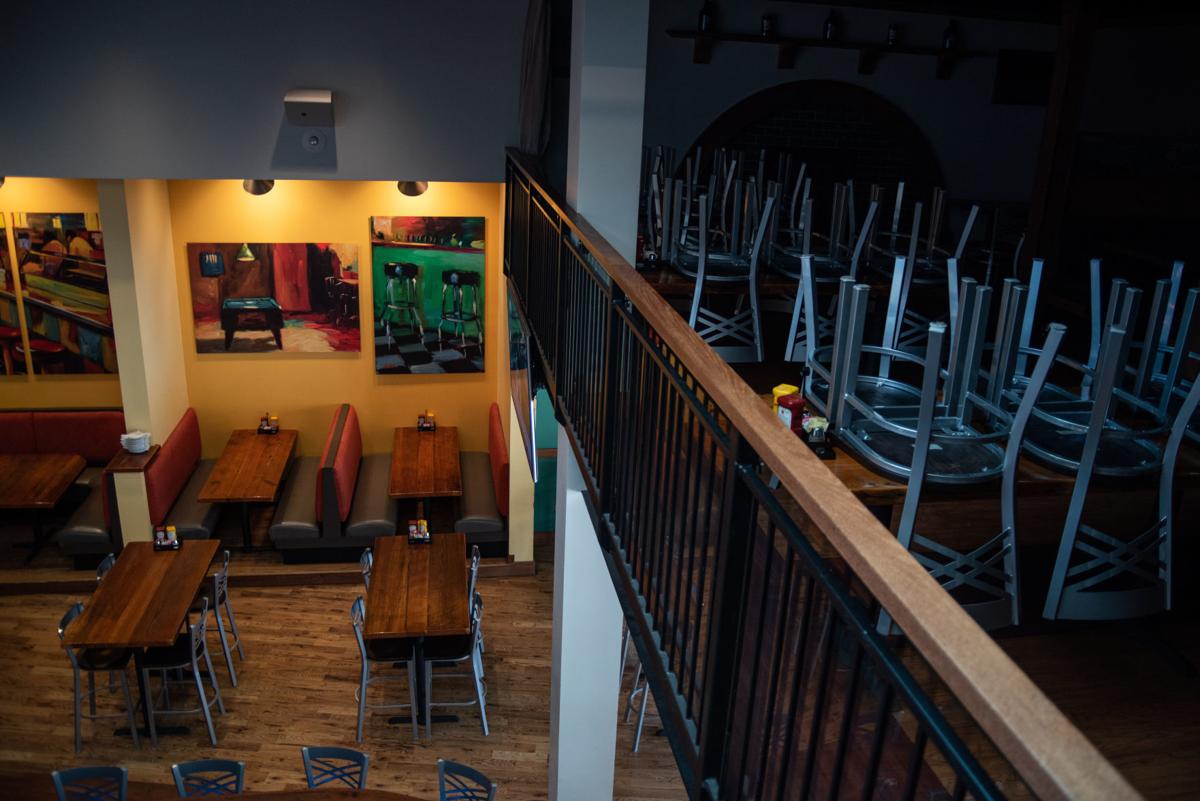 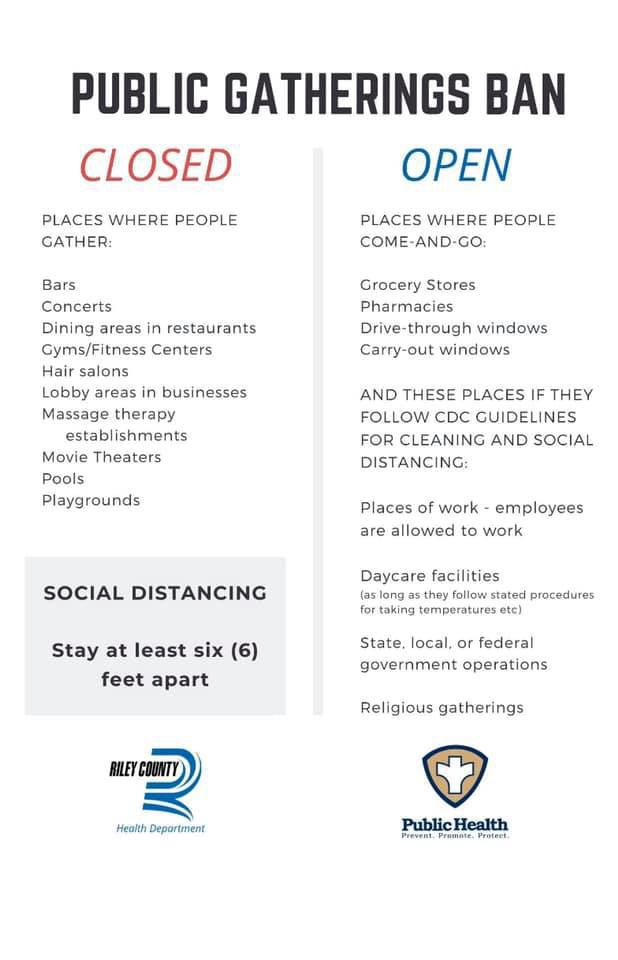 The Riley County Health Department put together a public gathering ban graphic for the public to reference.

The Riley County Health Department put together a public gathering ban graphic for the public to reference.

A county-wide ban on public gatherings on Saturday closed bars, restaurant dining rooms, gyms, hair salons and a number of other public places.

The ban specifically exempts places where people “come and go,” including grocery and convenience stores, and pharmacies. Places of work, daycares and religious gatherings may continue as long as people practice social distancing (maintaining 6 feet between people).

This order lasts until April 4. Gibbs can extend it, if needed.

Retail stores can stay open, Gibbs said, but there must be 10 people or fewer in the building, including employees.

“We’re asking stores to do their best at this time to make it happen,” she said.

Large retailers such as Menard’s and Home Depot are exempt from the order, Gibbs said. She didn’t give a particular size at which retailers don’t have to follow the 10-and-under rule.

She said the health department may come up with “stronger language” for those retail spaces.

Gibbs did not mention the closing of bars or restaurant dining rooms Friday during a press conference about the ban on public gatherings. Only on Saturday did it become evident, with a document outlining what’s allowed to remain open and what had to close, appearing on the health department’s website.

“I know it wasn’t really discussed at the press conference,” she said.

She said that’s because she thought that more people would ask questions on that subject but didn’t.

A written statement with the county’s order handed out at that press conference did not include references to the closing of such businesses, either.

Gibbs said the two positive cases of coronavirus in Morris County, which is south of Riley County, helped her decide to make the order.

She said the health department also wanted to be proactive.

“That was our main thing with that,” Gibbs said.

The order did not surprise Dennis Cook, executive director of the Aggieville Business Association.

He said he made sure to reach out to Aggieville restaurant and bar owners to make sure they knew about the order.

“They’re just like me, ‘Well, disappointing,’ but they were thinking it was inevitable,” he said.

Although he said restaurant and bar owners are disappointed, they understand why closures are needed.

“Everybody understands this,” he said. “This is for the good of Manhattan. ... It’s good for everybody.”

Cook said he is excited for MHK Together, a program that aims to provide funding to help local businesses during this time.

It is a “buy one, give one community relief program,” according to the website.

People can purchase gift cards to local businesses. MHK Together then provides grocery assistance to people in the same amount.

“MHK Together is a fantastic program,” Cook said.

Russ Loub, owner of the Little Apple Brewing Company, already had closed the dining area of the restaurant prior to Gibbs’ order, he said. The restaurant is offering carry-out and delivery.

Loub said he lobbied for closures of restaurants and bars for a variety of reasons, including public health and safety.

He also said that mandated closures open the door for restaurants under some insurance policies to gain extra funding during a disaster situation.

“That was one of the reasons why I wanted to see that done,” he said. Little Apple Brewing Company has seen an 80% reduction in sales, Loub said. He said it’s like a “trickle of income right now.”

Loub said the restaurant laid off about 40 employees, a move he hopes is temporary and allows the employees to seek unemployment benefits.

The restaurant has staff meetings every day, and makes decisions daily as the situation regarding COVID-19 changes.

“Things are changing so rapidly that decisions you made yesterday may not be any good tomorrow,” he said. “... I can’t project out a week or even two days,” Loub said.

Loub said his “heart goes out to all the people in the food industry in Manhattan.”

“I’m concerned about a lot of people,” he said.

Stuck in your home? What if it's a mobile one?

Tapper's plea to Trump: This is not about winning a news cycle on Fox