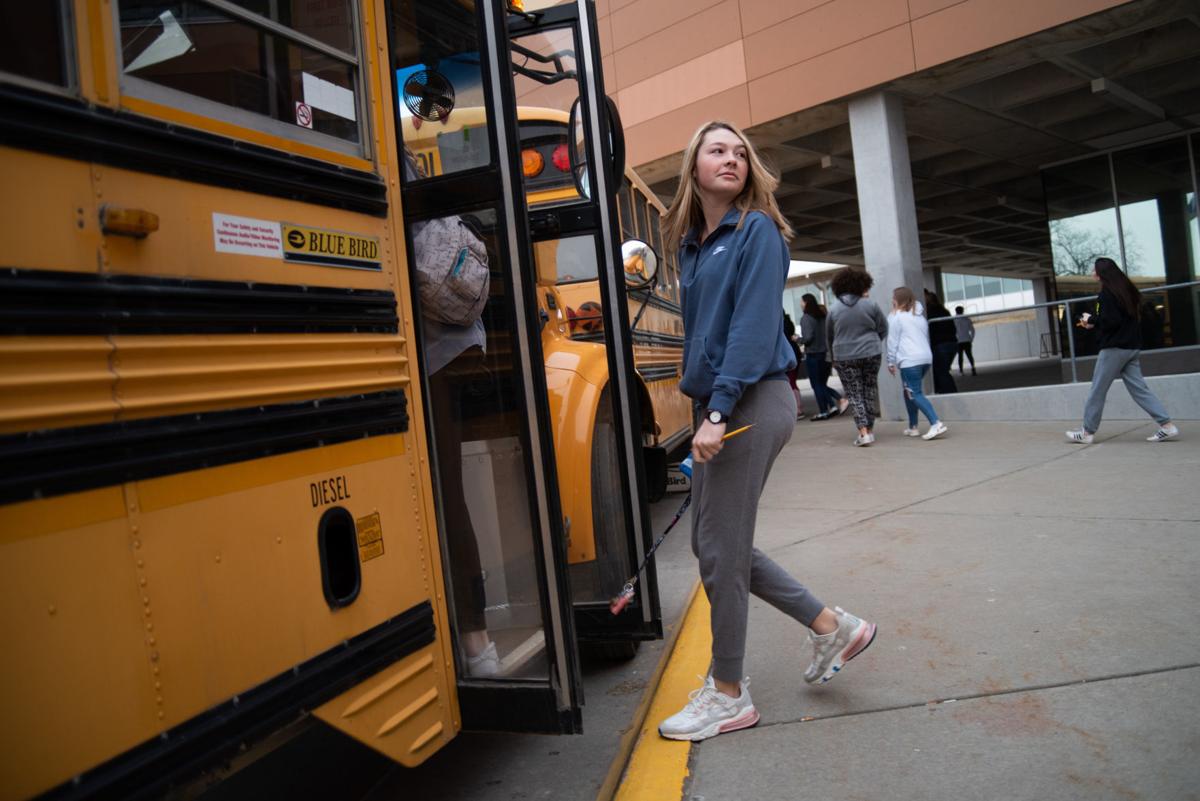 Rhys Phipps walks onto a bus Tuesday outside of Manhattan High that will take her and other MHS juniors to an ACT testing center. 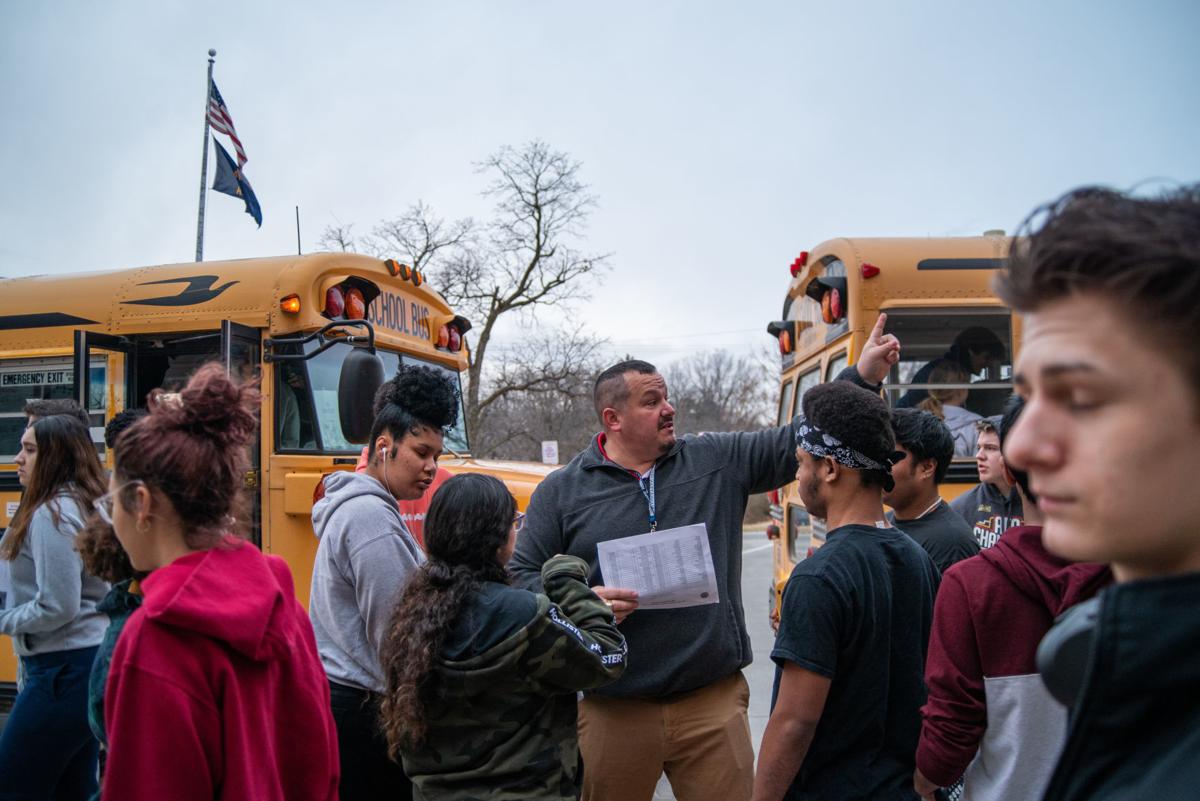 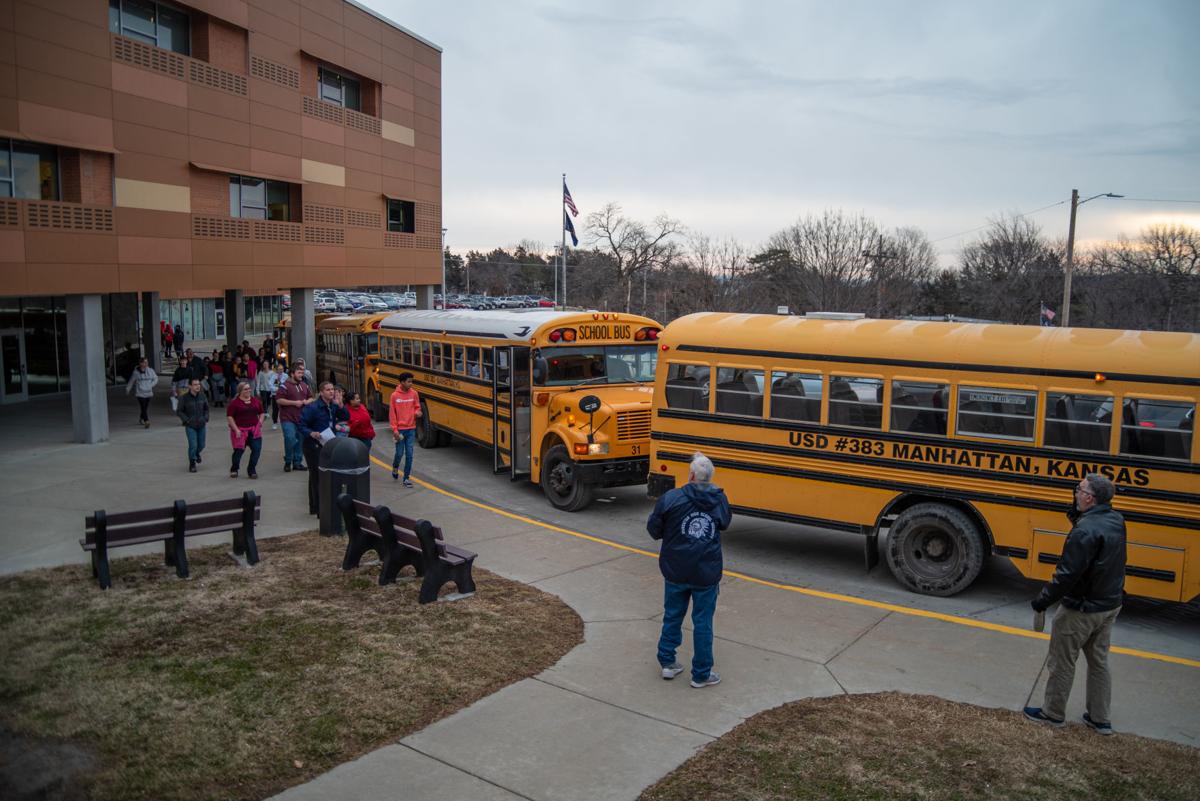 Busses line up out front of Manhattan High School on Tuesday morning to take students to ACT testing centers. 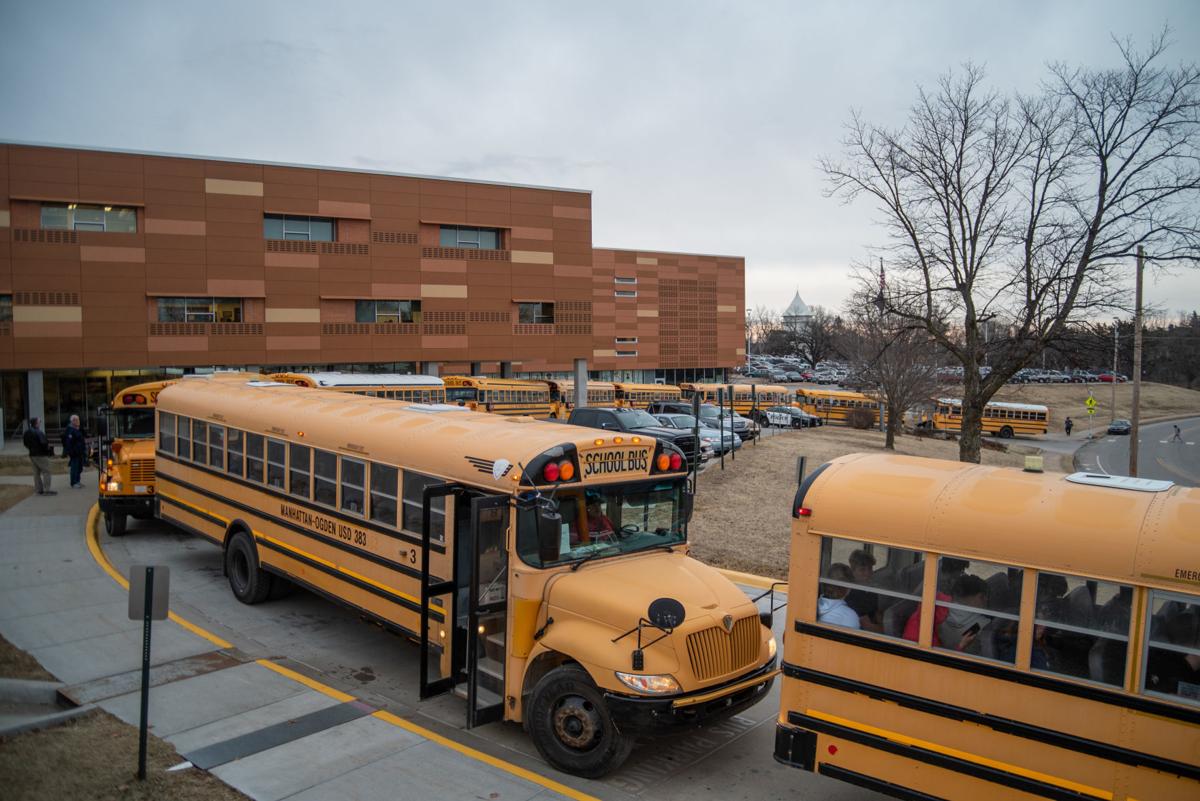 Busses line up out front of Manhattan High School on Feb. 25, 2020, to take students to ACT testing centers. 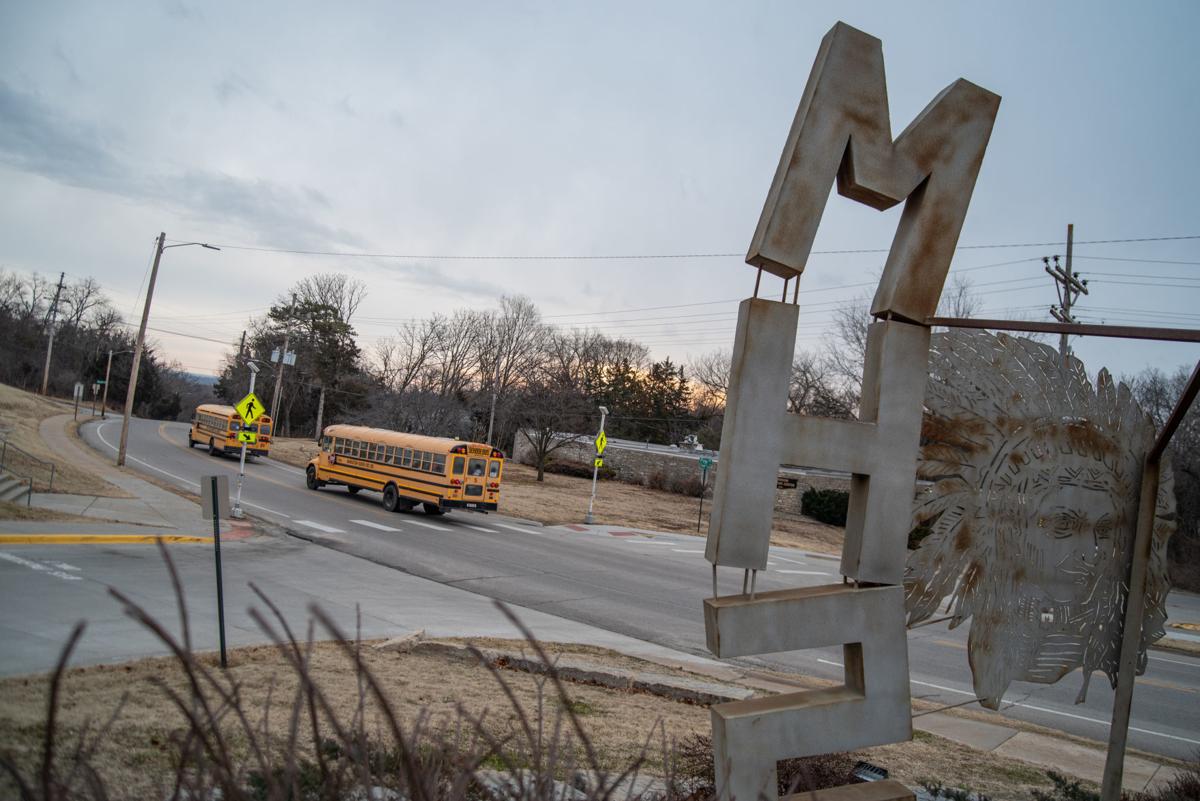 Busses drive down Poyntz Avenue away from Manhattan High School as they take student to ACT testing centers.

Rhys Phipps walks onto a bus Tuesday outside of Manhattan High that will take her and other MHS juniors to an ACT testing center.

Busses line up out front of Manhattan High School on Tuesday morning to take students to ACT testing centers.

Busses line up out front of Manhattan High School on Feb. 25, 2020, to take students to ACT testing centers.

Busses drive down Poyntz Avenue away from Manhattan High School as they take student to ACT testing centers.

Trina Dibbini, sophomore principal at Manhattan High School, could only cheer as if the students were off to a state championship as 10 buses with nearly 400 juniors left the school Tuesday morning.

Just 10 minutes before, the half-circle loop in front of the school had been frenetic, while the students searched for their buses. The buses would take them to one of three ACT testing sites — Manhattan High’s East Campus, the K-State Student Union and the Four Points by Sheraton hotel — so they needed to make sure they were on the right bus (sorted even further by last name) to the right testing center.

School administrators calmly directed the frenzy of students onto the appropriate buses, and by 8 a.m. they marveled at the fact that everything had gone smoothly.

This year is the second year that Kansas’ entire junior class has been able to take the ACT — which typically costs $52 for the base version — and WorkKeys tests for free. In 2018 after state scores on the test had fallen to a five-year low, the Kansas Department of Education announced it would pay for each Kansas junior to take the test on a designated day each spring.

The ACT, along with the SAT, is one of two national tests that higher education institutions use to measure high school students’ college readiness. Student scores on the test typically also are tied to scholarship dollars, and many students take the test multiple times to get a better score before applying for colleges their senior years.

On the other hand, the WorkKeys assessment, which juniors will take Wednesday, measures students’ workplace aptitude and skills, such as real-life math application, graphics literacy and workplace document comprehension.

Since the test became free for juniors, several students who would not have taken the test otherwise have had a chance to take it. While the testing isn’t mandatory, school officials urged students to take the test.

Before loading onto the buses, juniors Cantrell Thomas and Naaji’a Depusoir said they’d never taken the test before.

“I’m not nervous,” Thomas said. “The only place I’m applying to doesn’t require an ACT score, so I’m taking it because it’s free.”

“For me, I’m kind of nervous, because most of the places I want to go need the ACT,” Depusoir said. “I’m kind of chewing my heart out right now, but it’s fine. I’m trying not to stress myself out.”

But while the state pays for the test, it falls to local administrators to figure out the logistics of having an entire grade of students take it. Principal Michael Dorst said the process requires the coordination of several school and district-level departments to ensure a smooth operation for the morning test, starting with helping students register. Officials also need to transport them to the centers and make sure they’re all fed when they return from testing.

The Kansas State Board of Education has started early discussions on not requiring the annual state assessment for sophomores, and replacing that requirement with ACT testing for juniors. Dorst said school officials are starting to use the ACT as a gauge for academic performance. Manhattan High’s composite ACT score for the whole school was 23.1 last school year, compared to a state average of 21.2 and a national average of 20.8.

“If you want to know how well your students are performing, test everybody,” Dorst said. “Use that information to make proper decisions on how we’re preparing our students.”

Dorst said it would take a couple of years to cycle through the testing with the entire class, but once that happens, the school will have a more accurate indicator of how best to prepare students for college and careers.

Dorst said the school has not done anything special to prepare for the testing, because the test is simply a reflection of the school’s existing efforts.

“Through the rigor of our courses and teaching, we want the focus of our curriculum to be our students,” he said. “Successful students on the ACT and WorkKeys are a byproduct of that.”

Birx: This begins and ends with community