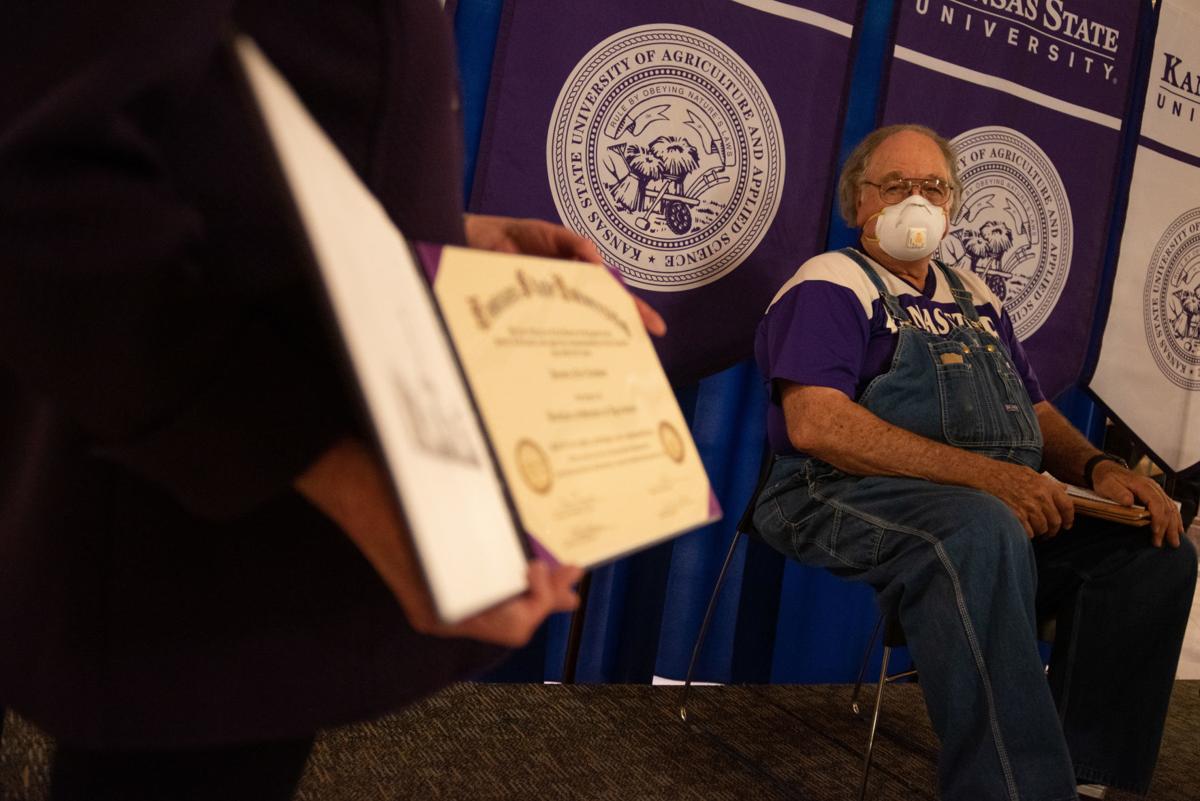 Gov. Laura Kelly presents Dennis Ruhnke his bachelor’s degree in agriculture from K-State on Tuesday afternoon at the Kansas State Capitol in Topeka. 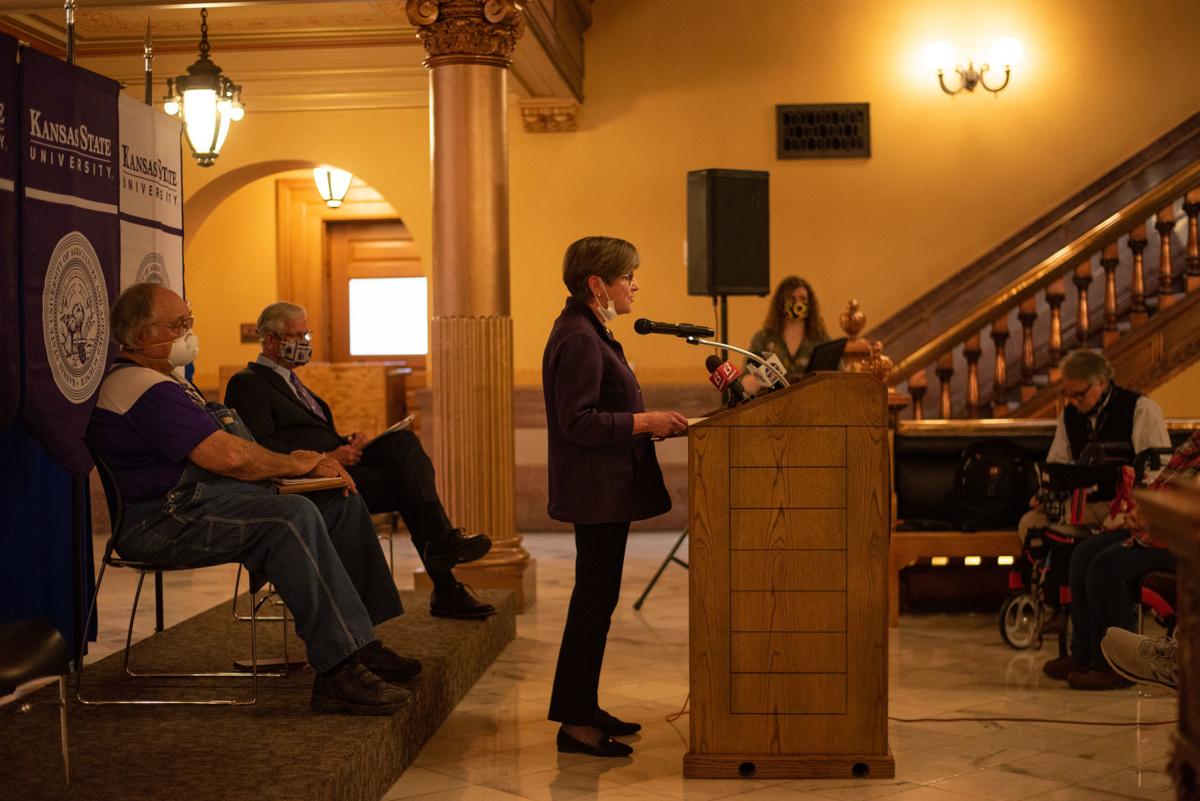 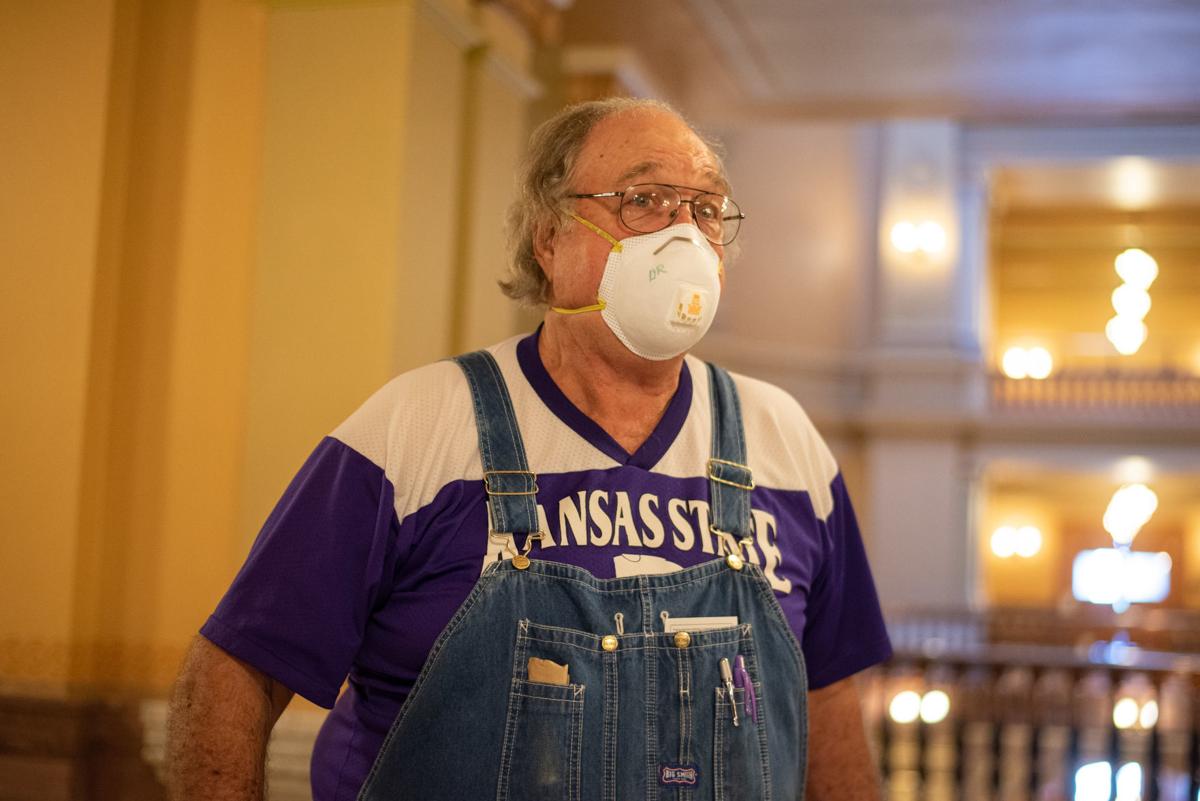 Dennis Ruhnke thanks everyone before leaving the Kansas State Capitol in Topeka. 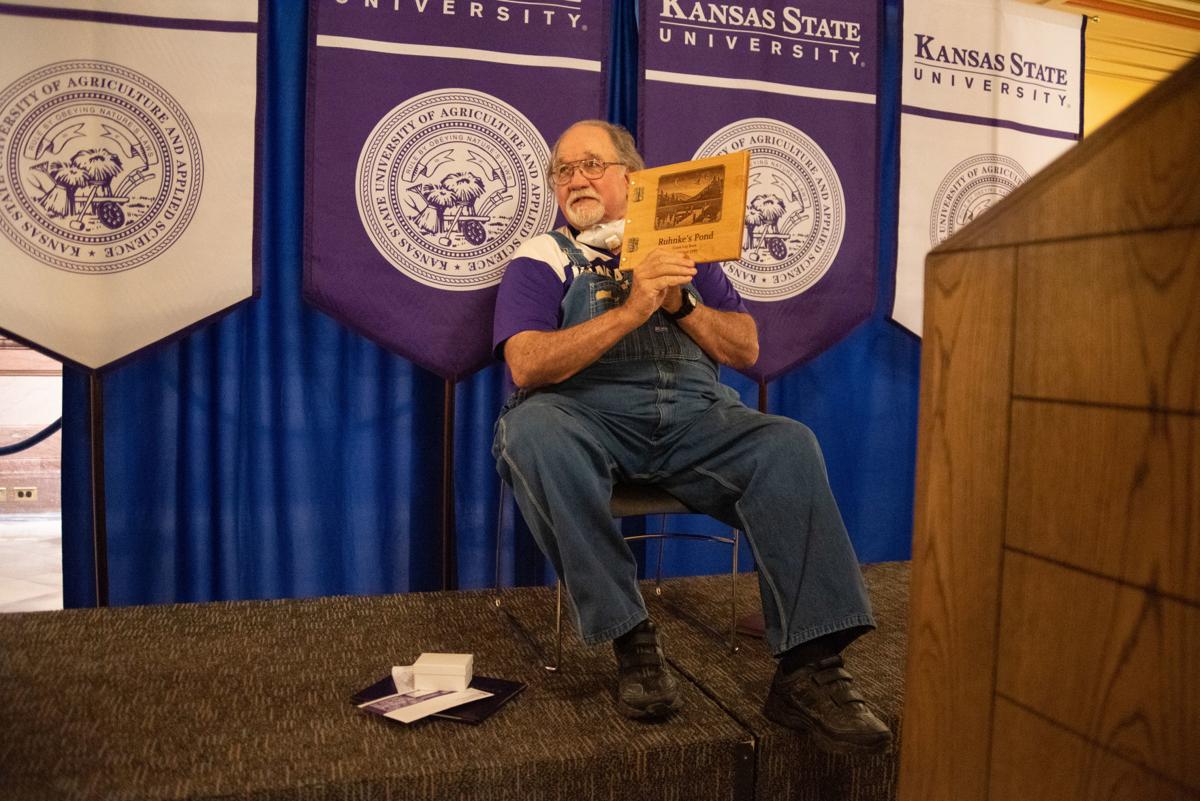 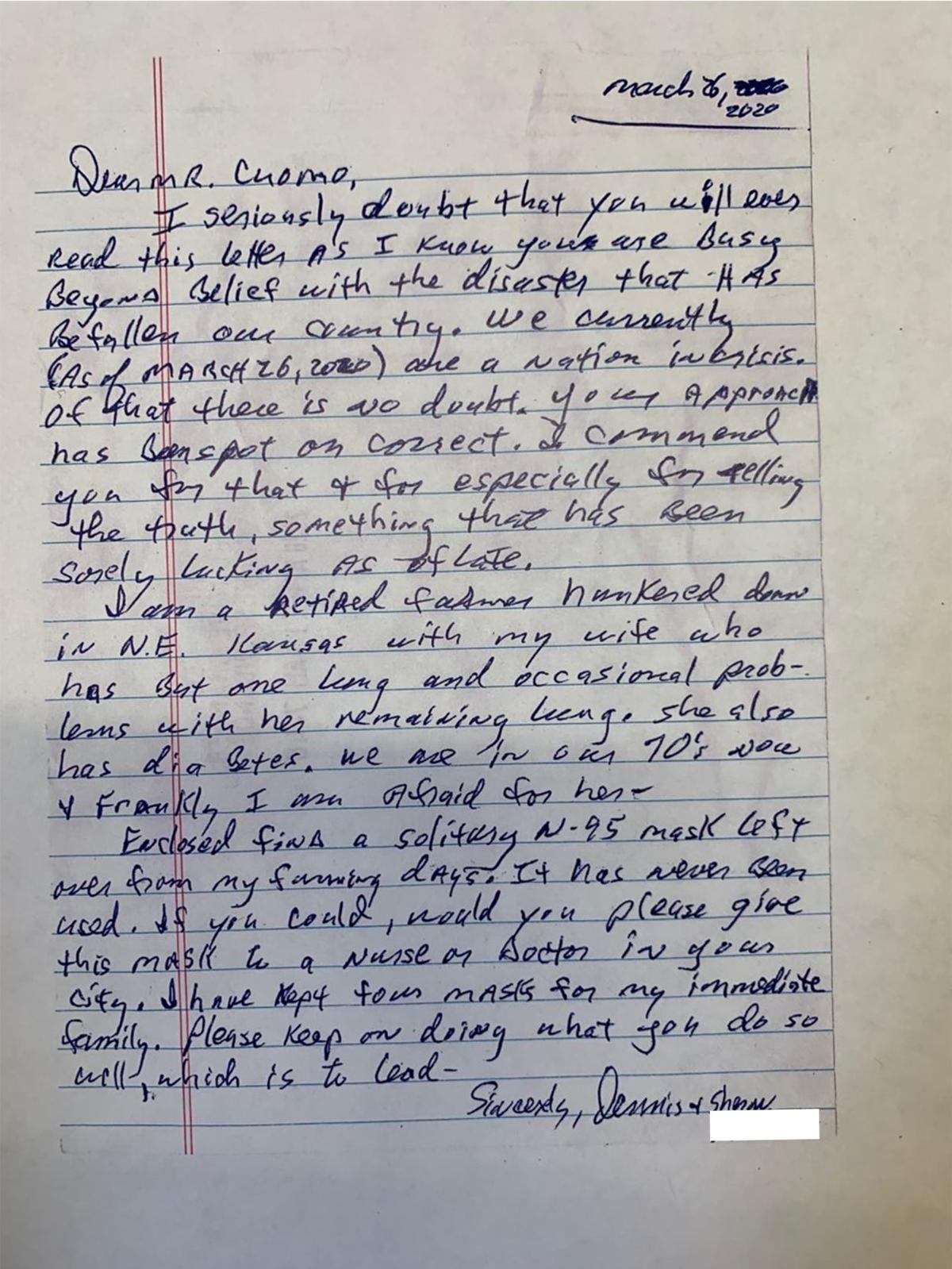 Alongside this handwritten note, Dennis Ruhnke, a 73-year-old farmer from Troy, Kansas, sent an N95 mask, one of five he had, to New York Gov. Andrew Cuomo.

Gov. Laura Kelly presents Dennis Ruhnke his bachelor’s degree in agriculture from K-State on Tuesday afternoon at the Kansas State Capitol in Topeka.

Dennis Ruhnke thanks everyone before leaving the Kansas State Capitol in Topeka.

Alongside this handwritten note, Dennis Ruhnke, a 73-year-old farmer from Troy, Kansas, sent an N95 mask, one of five he had, to New York Gov. Andrew Cuomo.

TOPEKA — It’s not that Dennis Ruhnke ever wanted anything in return for his simple handwritten note and donation of an N95 mask.

But what the Troy native did get back was the fulfillment of a lifelong dream he had thought abandoned nearly a half century ago.

“By the authority of the people of the state of Kansas and the Kansas Board of Regents, upon recommendation of the faculty and upon completion of the degree requirements, I am pleased to confer upon Dennis Ruhnke, in the graduating class of fall 1971, the degree you have earned at Kansas State University,” Myers proclaimed in front of the Brown vs. Board mural on the third floor of the statehouse.

The 73-year-old farmer had sent the mask — one of only five he had — in March to New York Gov. Andrew Cuomo. He doubted the governor would ever read it, but still, he knew he had to do something, however small, to help with the COVID-19 crisis in New York, which was quickly becoming an epicenter for the disease in the U.S. He asked Cuomo to make sure that the mask made its way to a doctor or nurse helping COVID-19 patients in the state.

Cuomo, in fact, did read his note, and shared Ruhnke’s act of kindness on national television, and soon, Ruhnke became a Kansan symbol of the nation’s ability to come together, or “humanity at its best,” as Cuomo put it.

Ruhnke — the modest Kansas farmer — shied away from the attention. But as reporters began asking him questions about him and his background, it came out that Ruhnke had attended K-State. He was just two credits shy of a degree in agriculture when he made the difficult decision to go back home to tend to his family’s farm when his father died in 1971, Kelly said.

Still, the “what if?” ate at Ruhnke, and as he watched his wife, sister and two sons graduate and walk across the K-State commencement stage, he longed for his own chance to do the same, Kelly said. About a decade ago, Ruhnke considered going back to college to take that last class to earn those last credits to finally get his degree, before his grandson beat him to it. However, the class no longer existed, and even if Ruhnke were to come back, he found out he’d have to start from scratch, as his old credits no longer counted.

“Given the insurmountable obstacles such an endeavor posed for a retired farmer in Troy, Kansas, Dennis quietly filed the dream away,” Kelly said, “and when he returned home in 1971, he built a beautiful family with his wife, Sharon.”

His “what if?” would remain just that.

That is, until Ruhnke mailed a simple handwritten note and solitary N95 mask to a governor he had never met in a state he had never lived in.

Once local officials and a K-Stater neighbor heard about Ruhnke’s “what if,” they took Ruhnke’s case for an honorary degree to Kelly, who in turn had Myers look into the matter. At K-State, university registrar officials went down into the basement of Anderson Hall, sorted through old records in a filing cabinet (no computer records exist from back then), and college officials reached a terrific conclusion — Ruhnke’s lifelong career in agriculture more than made up for the two discontinued credits, and he would earn a real degree from Kansas State University of Agriculture and Applied Science.

“Dennis is a Kansas agriculturist in every sense of the word, and today, we’re simply giving him the paperwork to make it official,” Kelly said.

After receiving his diploma, Ruhnke said that after a half century, he had written off any chance of ever getting the degree. He said his life has now been changed my the outpouring of support and emotion he’s received in the last weeks.

“It would not have happened had I not mailed in that one N95 mask to Gov. Cuomo for a first responder in March,” Ruhnke said. “I guess they call it karma. Many of those who have written to me and thanked me asked how they can help.

“Just pay it forward as much as you can afford to do so,” he continued, “to honor all of those who have lost their lives to the COVID-19 virus, and also honor the first responders who, in some cases, have even lost their own lives in the line of duty — the ultimate sacrifice.”

Dr. John Eplee, a family physician at Atchison Hospital and Ruhnke’s state representative for the 63rd District, said Ruhnke embodied the values and compassion Kansans have.

“It’s an act of love,” he said. “The ultimate act of paying it forward in whatever way you can, and it’s showing that Kansans care about what’s going on in New York. As corny as it sounds, we’re all in this together, and Dennis shows that. He wanted to help any way he could.”

“Dennis’ life journey may have taken an unexpected turn in 1971, but he took the lessons he learned at K-State to heart,” Kelly said. “I’m not talking about agricultural technology or management, agronomy or animal sciences, although those things surely played a role in his success (as a farmer).

“I’m talking about what K-Staters call the Wildcat Way,” she continued. “It’s having each other’s backs, it’s choosing to take risks, recovering from defeat and winning with humility. It’s about embracing challenges together. It’s about family.”

Beyond the Call of Duty Officer Hugs Protestor