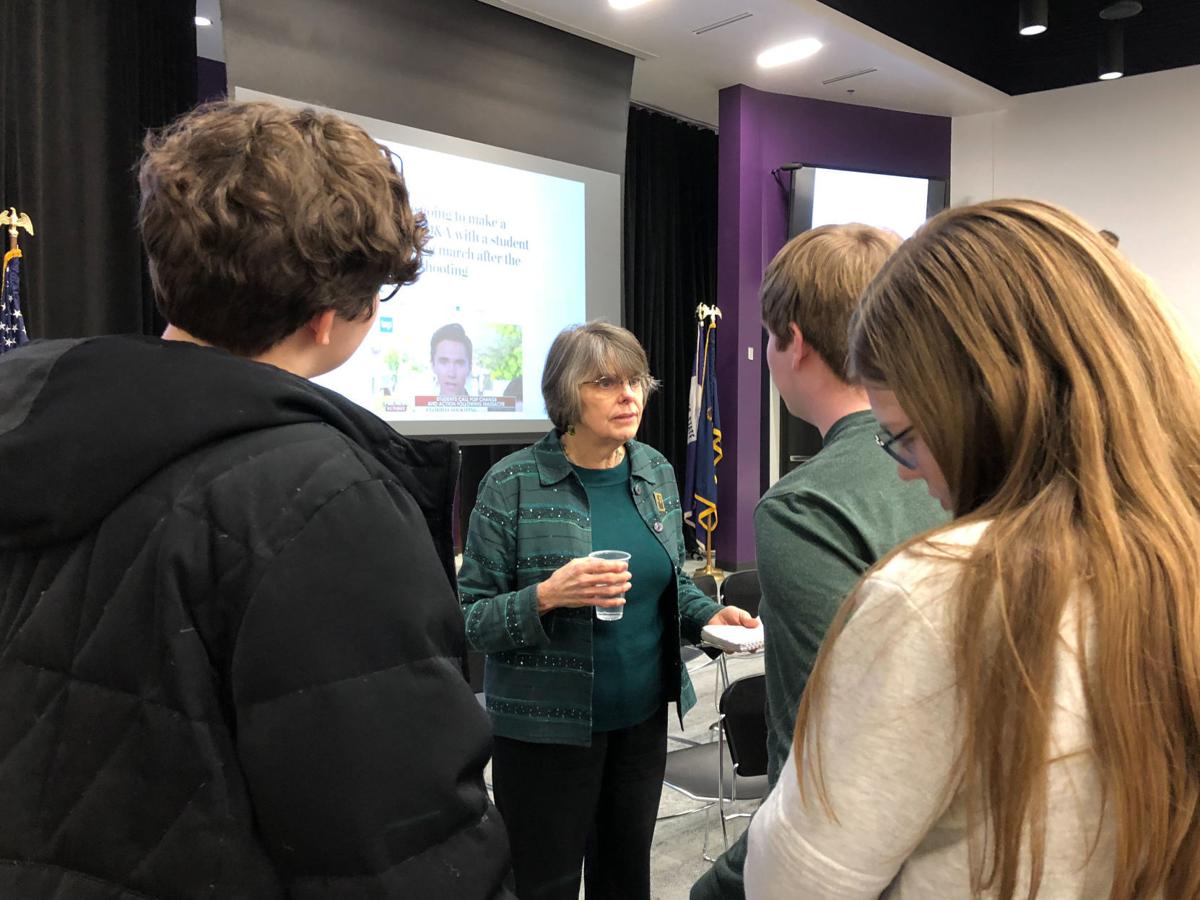 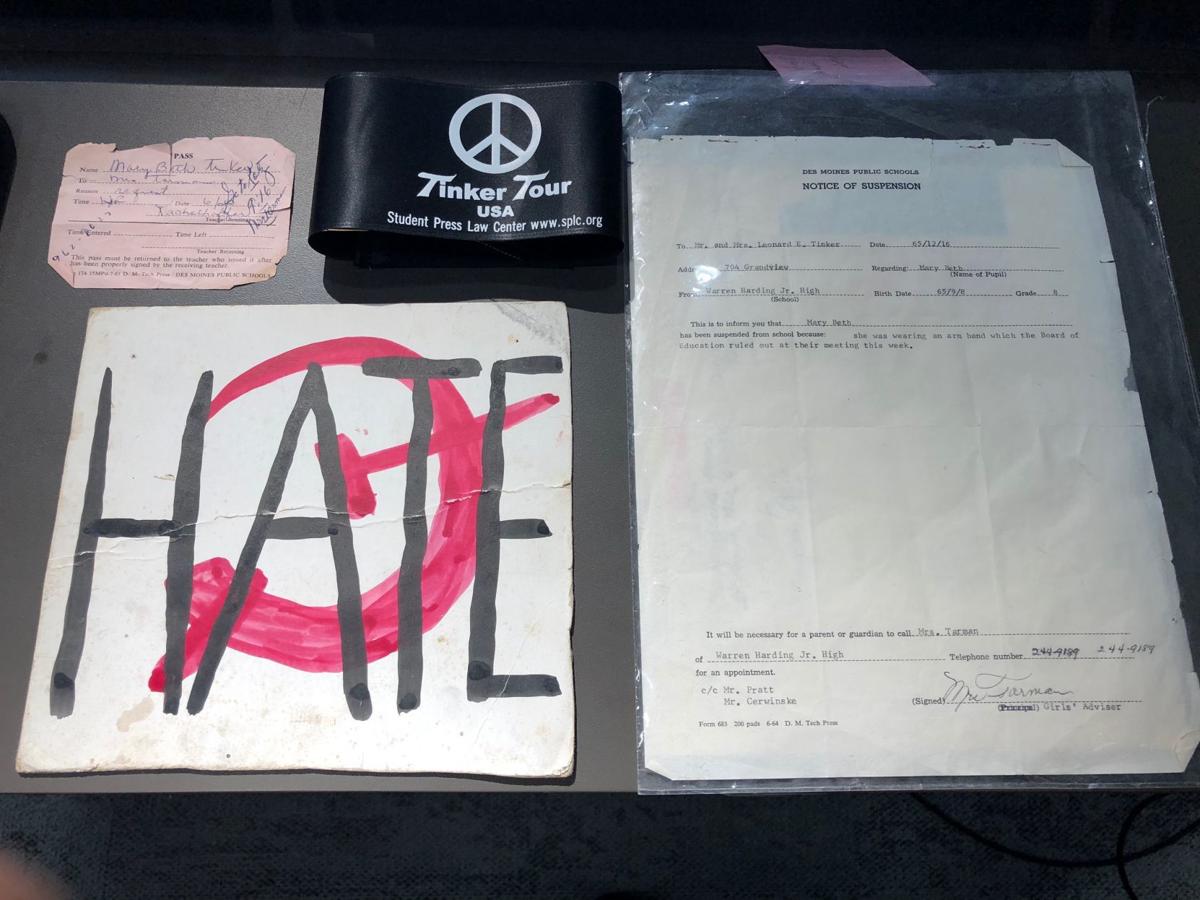 Mary Beth Tinker brought materials to her lecture Saturday relevant to her 1969 Supreme Court case, Tinker v. Des Moines Independent School District. (clockwise from left) The pink slip her teacher gave her after wearing her armband; a replica armband; a notice of suspension; mail sent to her home during the case.

Mary Beth Tinker brought materials to her lecture Saturday relevant to her 1969 Supreme Court case, Tinker v. Des Moines Independent School District. (clockwise from left) The pink slip her teacher gave her after wearing her armband; a replica armband; a notice of suspension; mail sent to her home during the case.

As teens in Florida and across the country advocate for stricter gun laws, a foremother of their movement spoke about the power of young people.

On Feb. 24, 1969, the Court ruled that the school district shouldn’t have suspended students for wearing black armbands to support a Vietnam War truce since the students’ action didn’t disrupt the school or impinge upon the rights of other students.

The case set a standard for determining whether a school is violating the First Amendment rights of students.

Tinker, who was a junior in high school when the ruling took place, said she didn’t realize it would be a landmark case for students’ rights.

“I was completely clueless about how important this ruling was,” she said. “I knew it was kind of important because my mom went out and got ice cream that night. Soda pop, too. That didn’t happen every day.”

About 50 people attended the lecture, which was an event for the Living Democracy program at K-State.

On Feb. 14, Nikolas Cruz, 19, killed 17 people in a mass shooting that also injured 14 others at Marjory Stoneman Douglas High School in Parkland, Florida.

Students from that high school have since advocated for stronger gun control, and Florida Gov. Rick Scott has announced a comprehensive plan that includes raising the minimum age to 21 years old to buy any gun.

Tinker said she thinks the country is witnessing a turning point with the younger generation speaking out, comparing it to how police violence during the Birmingham Children’s March in May 1963 represented a turning point in the Civil Rights Movement.

“Adults can speak up, but if we’re doing it for them and that’s second hand,” she said. “It’s so much more powerful when they speak up for themselves.”

In her situation, Tinker and her siblings, John, Hope and Paul, as well as a friend, Christopher Eckhardt, decided to wear armbands in 1965 even though it defied school policy.

Before a larger number of students could wear black armbands as planned, the school district’s principals passed a rule stating students would be suspended for wearing them.

Tinker, who was 13 years old at that time, said she decided she would “try to be brave.”

“I was really nervous about doing it,” she said. “I didn’t know if I should do it. I was so shy.”

Tinker said many people like to say that young people are the future, but they can also speak up today.

“Young people are also the present,” she said. “We don’t have to wait for the future. You’re already here. Let’s get started.”

Tinker said she warns students that her case doesn’t cover any potential protests that involve walking out of school, but some students are willing to take the consequences.

“It’s called civil disobedience,” she said. “It’s what Rosa Parks did. It’s what Martin Luther King did. It’s what so many people who we admired in our history have done.”

Sam Thompson, a freshman at the University of Kansas, and Erin Grochowsky, a freshman at K-State, both learned about Tinker during their senior year at Shawnee Mission North High School.

“It was very interesting to hear her stance on things, especially with her experience,” Thompson said.

“Everybody had a chance to express their opinions in a safe place where nobody was going to be verbal attacked for saying their opinions,” she said.

Some of the discussion touched on free speech on college campuses. Universities across the nation have considered whether controversial figures should be allowed on campus.

“If there be time to expose through discussion the falsehood and fallacies, to avert the evil by the processes of education, the remedy to be applied is more speech, not enforced silence,” he said.

As an advocate for free speech, Tinker said she would rather have people say things than censor them.

After she spoke at one middle school, Tinker said a boy said his church was against homosexuality, against gay rights, and he was afraid he couldn’t express that.