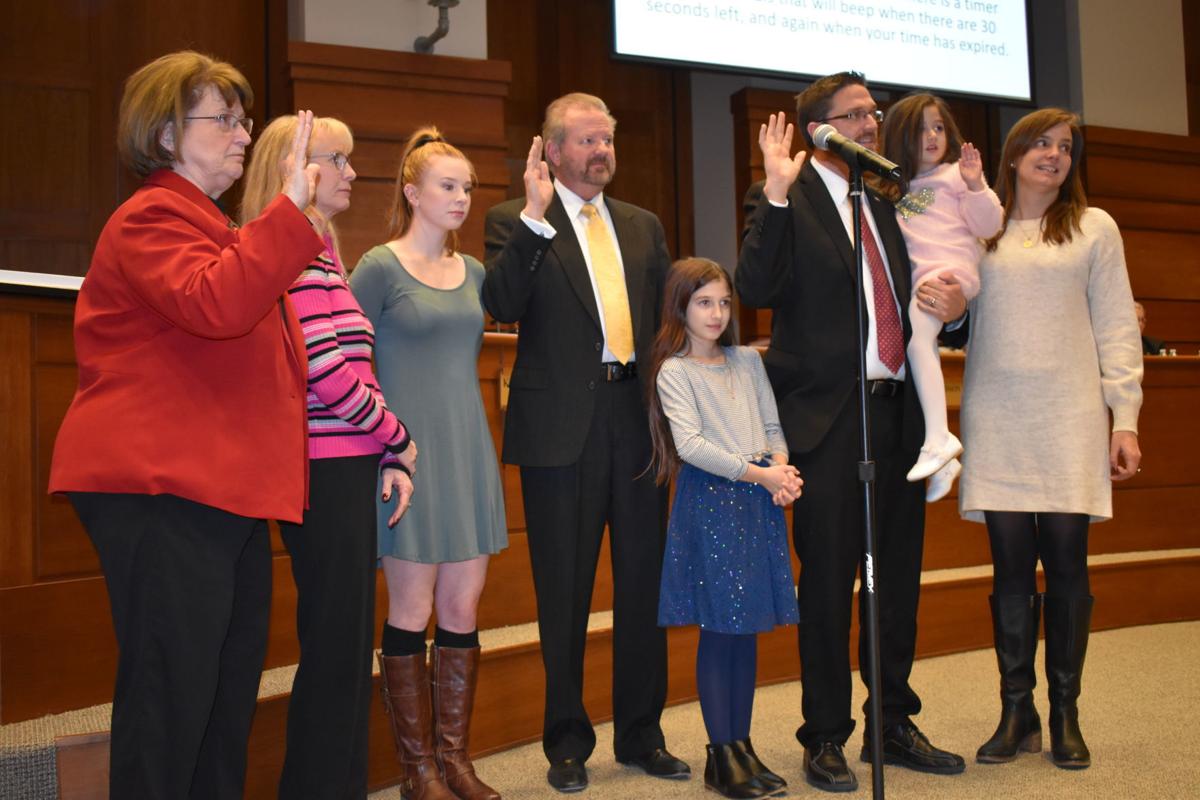 New commissioners Linda Morse, Mark Hatesohl and Aaron Estabrook are sworn in as members of their families look on. Pictured are Morse; Hatesohl with his wife, Pamela, and daughter Georgia; and Estabrook with his daughters Sophia and Kennedy Estabrook and wife Dantia MacDonald. 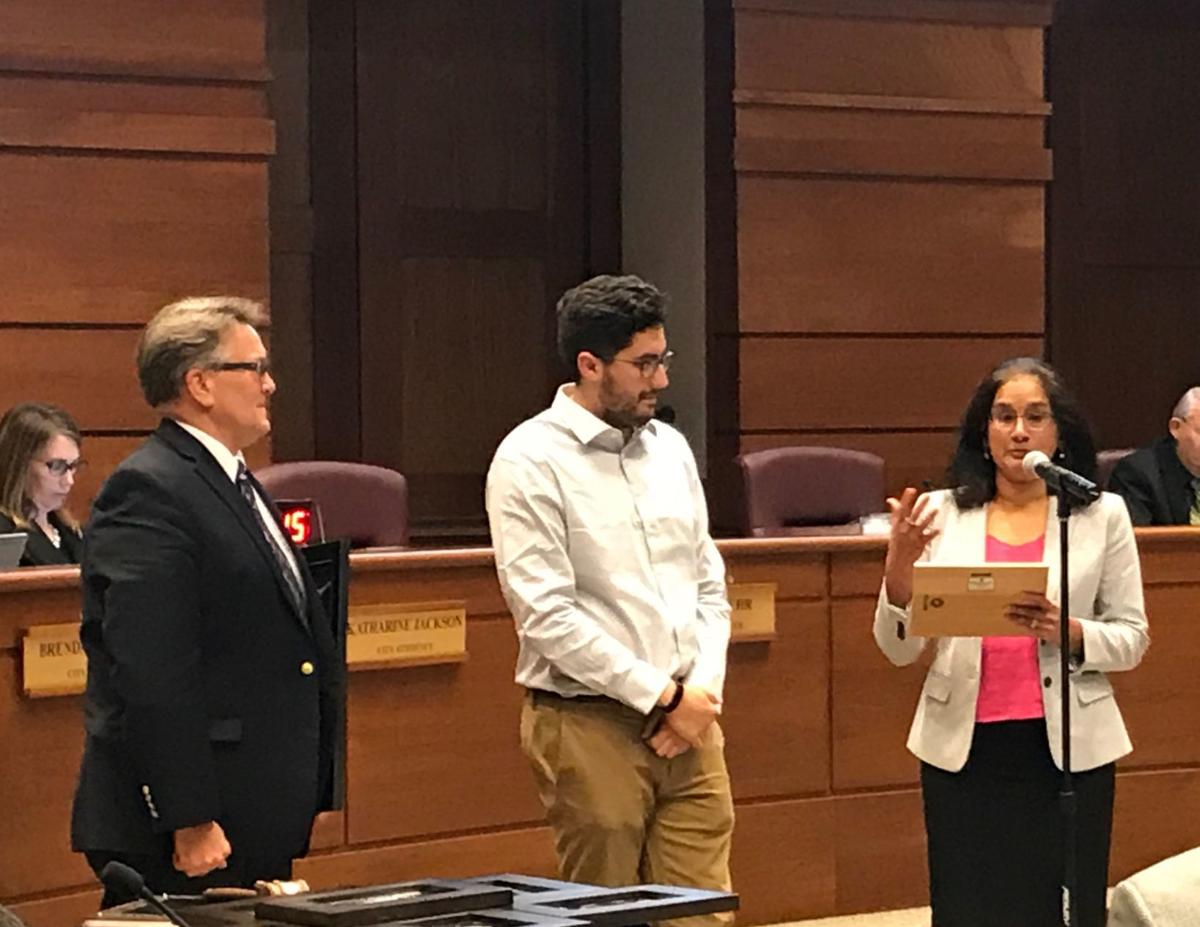 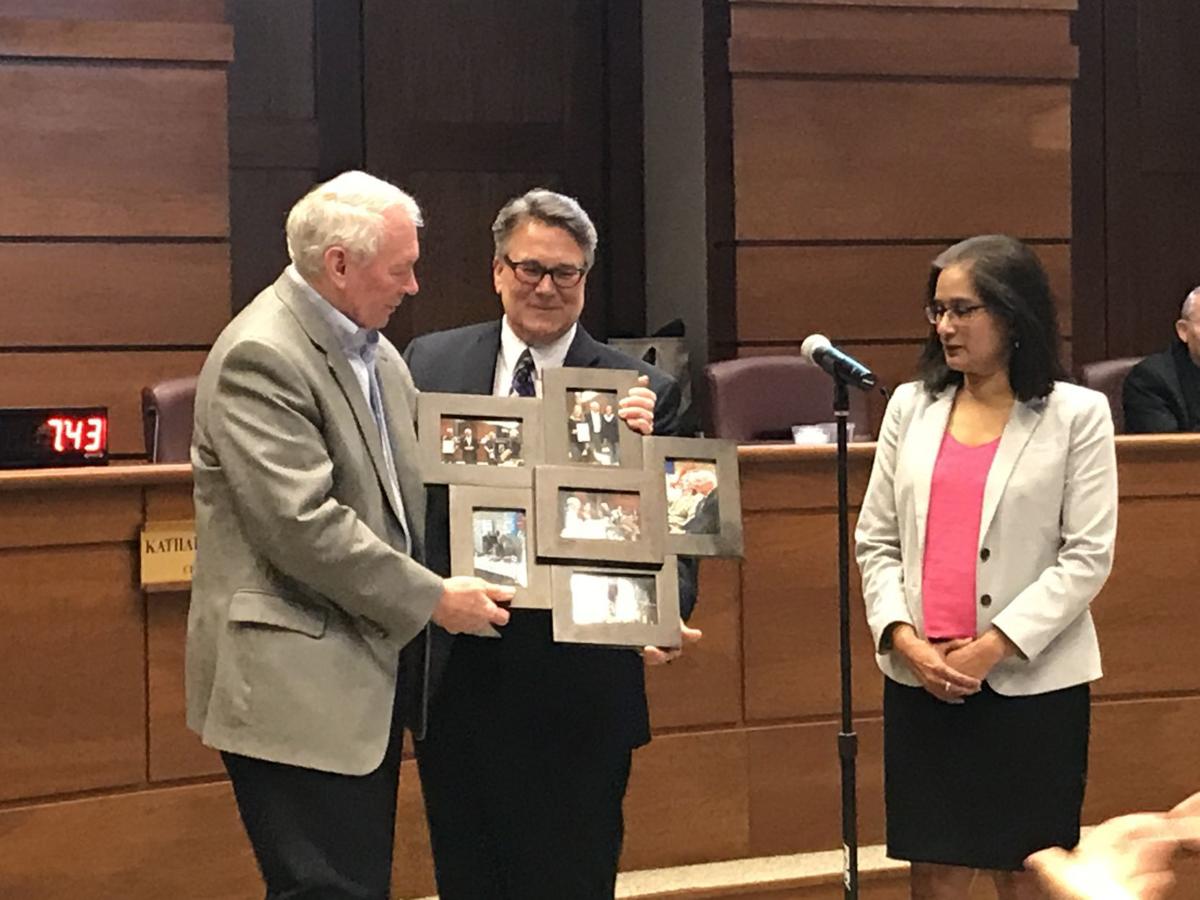 New commissioners Linda Morse, Mark Hatesohl and Aaron Estabrook are sworn in as members of their families look on. Pictured are Morse; Hatesohl with his wife, Pamela, and daughter Georgia; and Estabrook with his daughters Sophia and Kennedy Estabrook and wife Dantia MacDonald.

Manhattan has a new mayor and mayor pro tem in Usha Reddi and Wynn Butler, respectively.

Reddi, who served as mayor pro tem before being selected as mayor, served as the mayor of Manhattan in 2016 and 2017. She is also a Democratic candidate for the U.S. Senate in Kansas.

“I’m honored to be the mayor of Manhattan once again,” Reddi said. “And it’s a thrill to be here on the shoulders of many, and I hope many more follow in our footsteps. It’s a hard job, but I think everybody is capable of participating in this process.”

During the meeting, city clerk Brenda Wolf asked commissioners for nominations for mayor and mayor pro tem. Traditionally, the nominees are the commissioners who received the most votes in the previous election — in this case, the 2017 election.

Reddi said mental health is still a priority for her as mayor.

“There is a need in our community, and it must be addressed,” Reddi said.

Joining them on the commission are new commissioners Mark Hatesohl and Aaron Estabrook. Incumbent Linda Morse was also sworn in as a commissioner.

Morse and Hatesohl were elected to four-year terms while Estabrook, who finished in third place, earned a two-year term. Morse won the election while Hatesohl finished in second place.

Dodson recognized various city departments, officials and volunteers that keep the city functioning in his closing remarks as mayor. He said he thinks the future is bright for Manhattan, despite some challenges.

“I just want to thank everybody. It’s been a great experience for me,” Dodson said.

City manager Ron Fehr and Reddi presented Dodson with a plaque and collage of photos. Reddi thanked Dodson for his service and said she is glad to have Dodson as a friend.

McKee said each commissioner has taught him a lot over the past two years, and he said he hoped he was able to teach things to the other commissioners as well.

“It’s been an absolute privilege to serve with these four on the commission,” McKee said.

He discussed the importance of the presence of young people in Manhattan, stating that many people in the community were surprised that he served as a commissioner because of his younger age.

“Don’t think of me as special because I’m not special,” McKee said.

“Find more people who are like me because they are out there and willing to engage on these issues and be a part of this community. And the minute that we start doing a better job engaging them, we’ll stop having meetings wondering why we can’t keep people here.”

McKee, who teared up during his remarks, said he is a better person because of serving on the commission.

Fehr and Reddi presented McKee with his own city flag, a plaque and a photo collage.

Reddi said she thought the commission over the past two years was diverse in that it served a variety of constituents with different religions, political parties, genders, ethnicities, ages, sexual orientations and marital statuses.

“Manhattan has a lot to be proud of,” Reddi said.