The curbless 12th Street option that the majority of the Manhattan city commissioners favor includes trees, string lights and pavers. 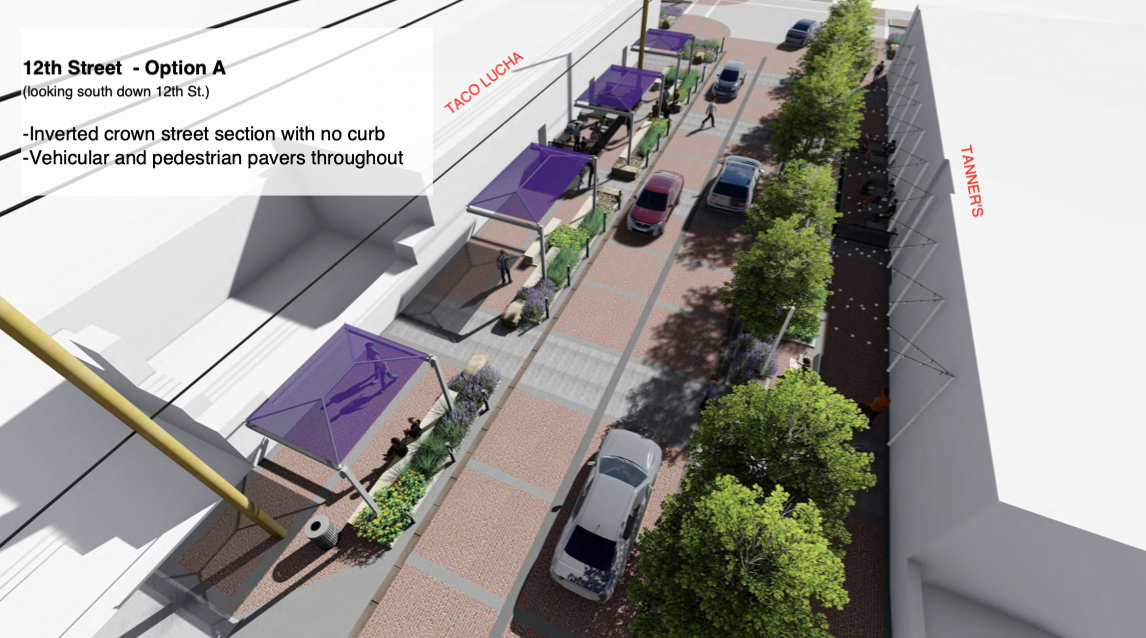 The curbless 12th Street option that the majority of the Manhattan city commissioners favor includes trees, string lights and pavers.

The majority of the Manhattan city commissioners Tuesday supported a curbless sidewalk on both sides of 12th Street with pedestrian and vehicular pavers. (Pavers are similar to bricks that are laid down for a sidewalk.) This option also places the drain in the center of the street.

The commission looked at three different plans for Moro Street, but did not vote on any option at the work session.

Mayor Usha Reddi, and commissioners Wynn Butler, Aaron Estabrook and Mark Hatesohl all favored the curbless sidewalk option that also has an “inverted crown” street section. The gutter will be placed in the middle of the street.

“I like the idea of the pavers and such. I like that people stumbling out of places in Aggieville won’t have to fall off a curb. They’ll just slide right down,” Hatesohl said, which prompted laughter from the audience. “I think we should do that throughout Aggieville.”

Commissioner Linda Morse supported a different option that has a standard concrete curb, but still included brick pavers for sidewalks.

“I think it’s wonderful to have such a setting, but I think we have concrete streets everywhere and we get by with them,” Morse said. “I agree with dressing up the sidewalks with pavers and having planters.”

Like the majority of the commission, Dennis Cook, executive director of the Aggieville Business Association, favored the curbless option.

The curbless option would cost the city $1.7 million while the option Morse likes would cost $1.6 million.

The city plans to pay for 12th Street improvements in a variety of ways, including setting up a benefit district and using tax increment financing, water and stormwater funds, officials said.

Cam Ward of the Alms Group Real Estate urged the city commission to look for alternative, temporary parking areas while construction is in progress on 12th Street.

Ward said he did not want the construction to negatively impact any businesses along the street.

“A couple bad months could put people out of business,” Ward said.

Officials said they plan to start 12th Street construction this summer with the project extending to next summer.

The overall Aggieville project to improve the district’s infrastructure will cost $16.5 million. In addition to 12th Street, a new parking garage will cost $12.5 million and more than $2 million will go toward Laramie and 14th Street improvements.

John King breaks down Sanders' effect on polls after Nevada