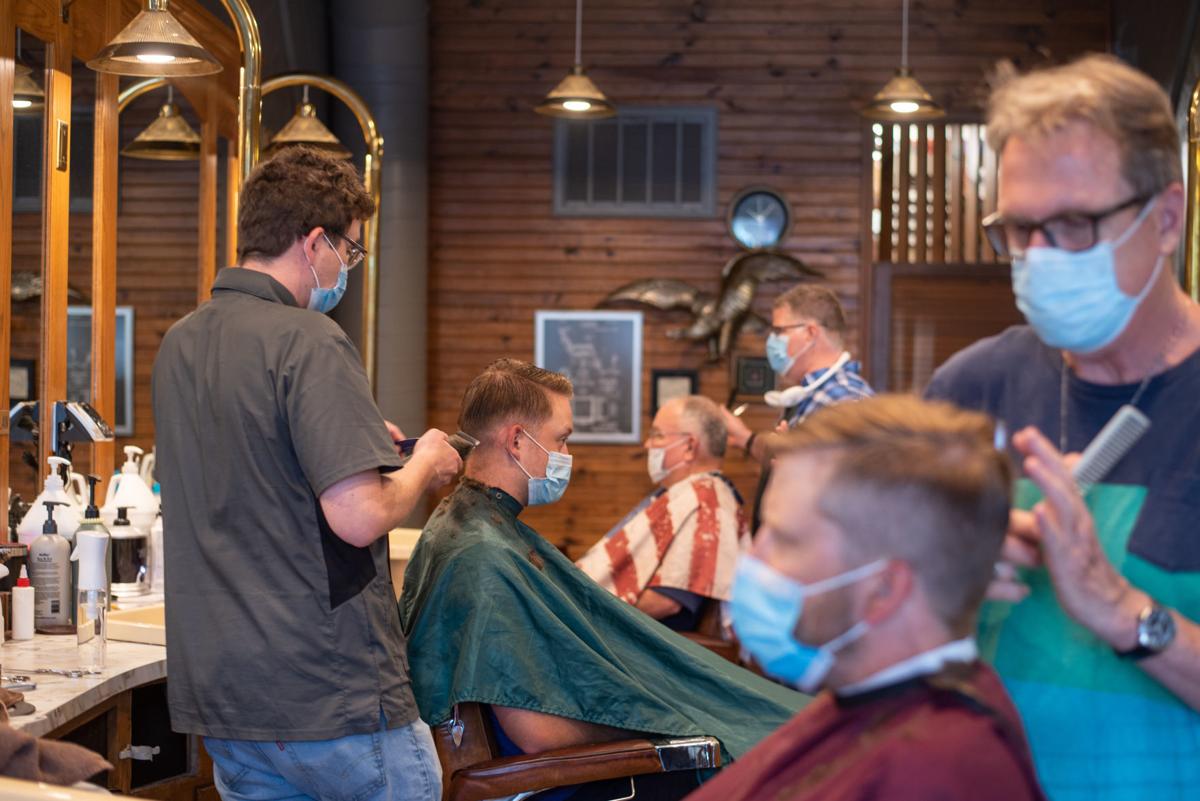 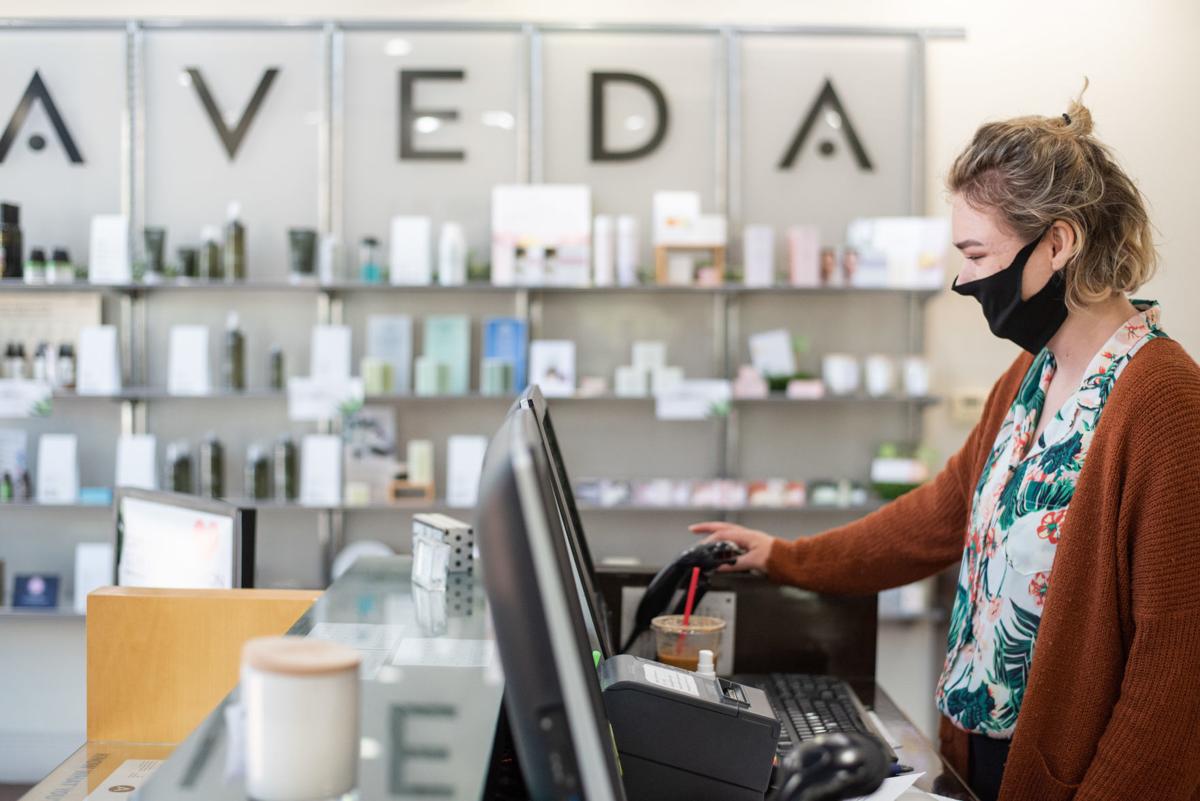 Maryanna Porter stands behind the cash register at Gaia Salon Spa on Wednesday. “We haven’t seen our guests for two months and you want to hug them but you can’t. So it’s sad, but it’s great to see everyone. We are all in it together,” Porter said.

Maryanna Porter stands behind the cash register at Gaia Salon Spa on Wednesday. “We haven’t seen our guests for two months and you want to hug them but you can’t. So it’s sad, but it’s great to see everyone. We are all in it together,” Porter said.

People are required to wear masks in public in Manhattan until Sept. 7 in response to the local spike in coronavirus cases.

The ordinance doesn’t call for jail time, but there can be fines for not wearing a mask in public. A first violation is $5, a second violation is $10 while the third and subsequent violations are $20. Court costs are $98, according to the city memo. A person can work off a fine plus $74.50 of the court costs through community service, at the state rate of $6 per hour.

RCPD Director Dennis Butler said he is concerned about the police department’s capacity to enforce this, but that doesn’t mean police officers won’t do it.

“I would never either publicly nor privately ever refuse to enforce a city ordinance that’s on the books,” he said.

He said this is new territory for the police department.

“We really don’t know yet how many complaints we’re going to receive or what that’s going to look like,” he said.

To report complaints or violations, the department asks people to call the non-emergency line at 785-537-2112.

Hatesohl preferred a resolution encouraging the wearing of masks instead of an ordinance.

“People are just tired over the last four months of various levels of government running their lives,” he said, “telling them what they can, can’t do, and frankly, they’re tired of it, especially since the number of cases, even though it has gone up, it’s mostly young people who aren’t terribly ill and they’re fine in a few days.”

He said he thinks this mask requirement will make Manhattan more frightening to people who do not live here and make them not want to come visit.

Butler said he had problems with uniformity. Riley, Geary and Pottawatomie counties opted out of the mask executive order set by Gov. Laura Kelly last week.

“We have an (emergency operations center) that’s supposed to be setting the lead, and the whole idea of intergovernment cooperation is sort of out the window from what I can see,” he said.

“Because we don’t have a unified voice, and that’s what’s confusing a lot of people in this town. And we haven’t been able to unify that, and my personal thought still is, I’m not sure the masks work. I think they’re probably marginally effective.”

Local doctors expressed their support for masks in the community.

Dr. Ryan Knopp of Stonecreek Family Physicians spoke to the commission, stating primary care units are very busy right now. He equated the situation to the peak of the flu season.

He said this is the tip of the iceberg before fall and winter comes.

Looking ahead, doctors are worried about “our New York,” Knopp said.

“Which is what we’re worried about in the fall and the winter, which is the time we’ll see our greatest influx of cases and hit capacity at places like our hospital, and ICU and ventilators,” he said.

“That hypothetical is now becoming more an impending reality based on the trajectory of this pandemic we’ve seen through April, May and now what we’ve experienced through July.” Knopp said the coronavirus is much more unpredictable than the flu.

“Meaning we are seeing things that are just not typical, not normal, definitely not comparable to what we see with influenza,” he said. “On the ground, you know, boots on the ground, (COVID-19) looks and feels different. It is more tricky, it is more unpredictable and it looks to have more long-term, dire consequences based on what we’ve observed and the data we’ve seen so far.”

Dr. Segen Chase, an internal medicine physician at CenterPointe Physicians, said requiring masks in public will help in slowing the spread of the virus.

“It’s time for universal masking in our community for the safety of our citizens,” she said.

At Kansas State University, with looking at a population of 15,000 students, if 10% of those students are positive with the virus, that would be an influx of 1,500 infected people, Chase said.

K-State will require masks on campus. Fort Riley also requires masks on base. Estabrook said he hopes this ordinance gives uniformity and understanding to the public.

“So it gives us a little bit of time to stop this start and stop, this lurching and pulling back of day-to-day ordinance changes from the county, from the state, federal, whatever,” he said.

He said he hopes this gives doctors an opportunity to get ready for the fall.

Obama offers to get Covid-19 vaccine on camera