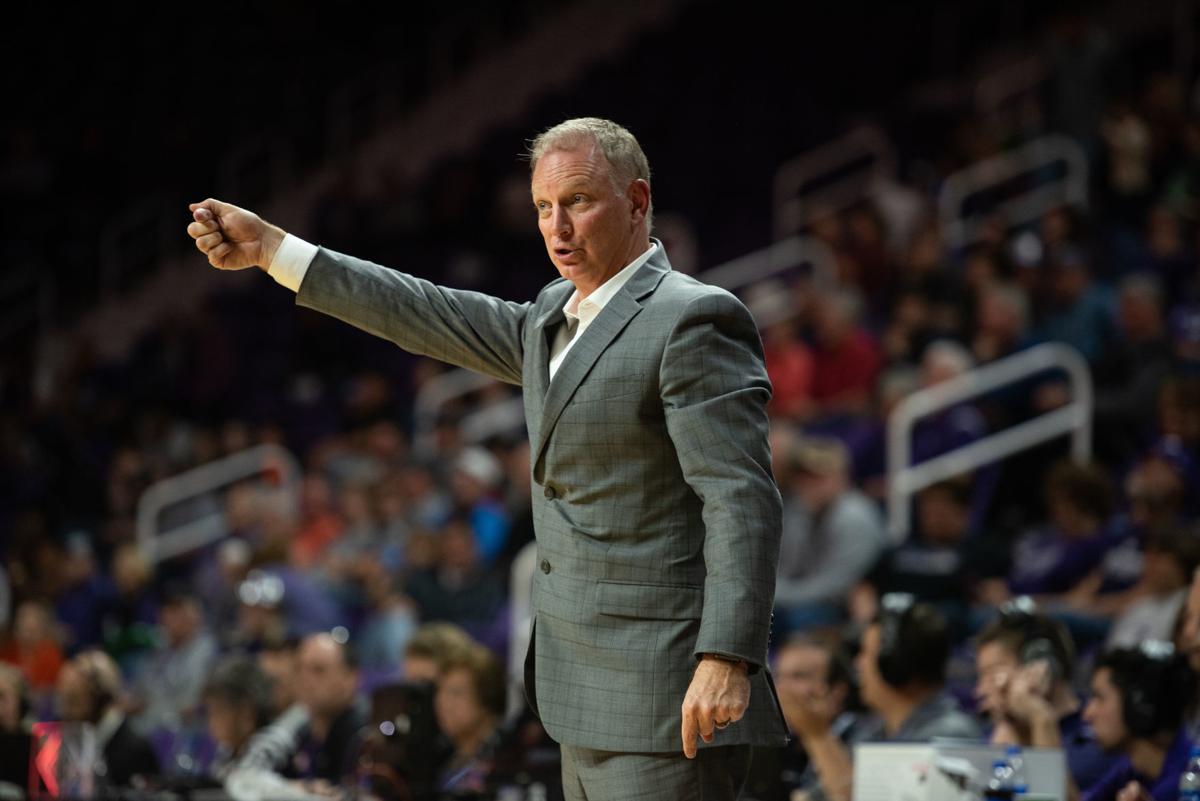 Kansas State head coach Jeff Mittie gives his team hand signals from the sideline during the third quarter of K-State’s game against Texas-Rio Grande Valley. The Wildcats’ season came to an abrupt end when the Big 12 and NCAA canceled their postseason tournaments. 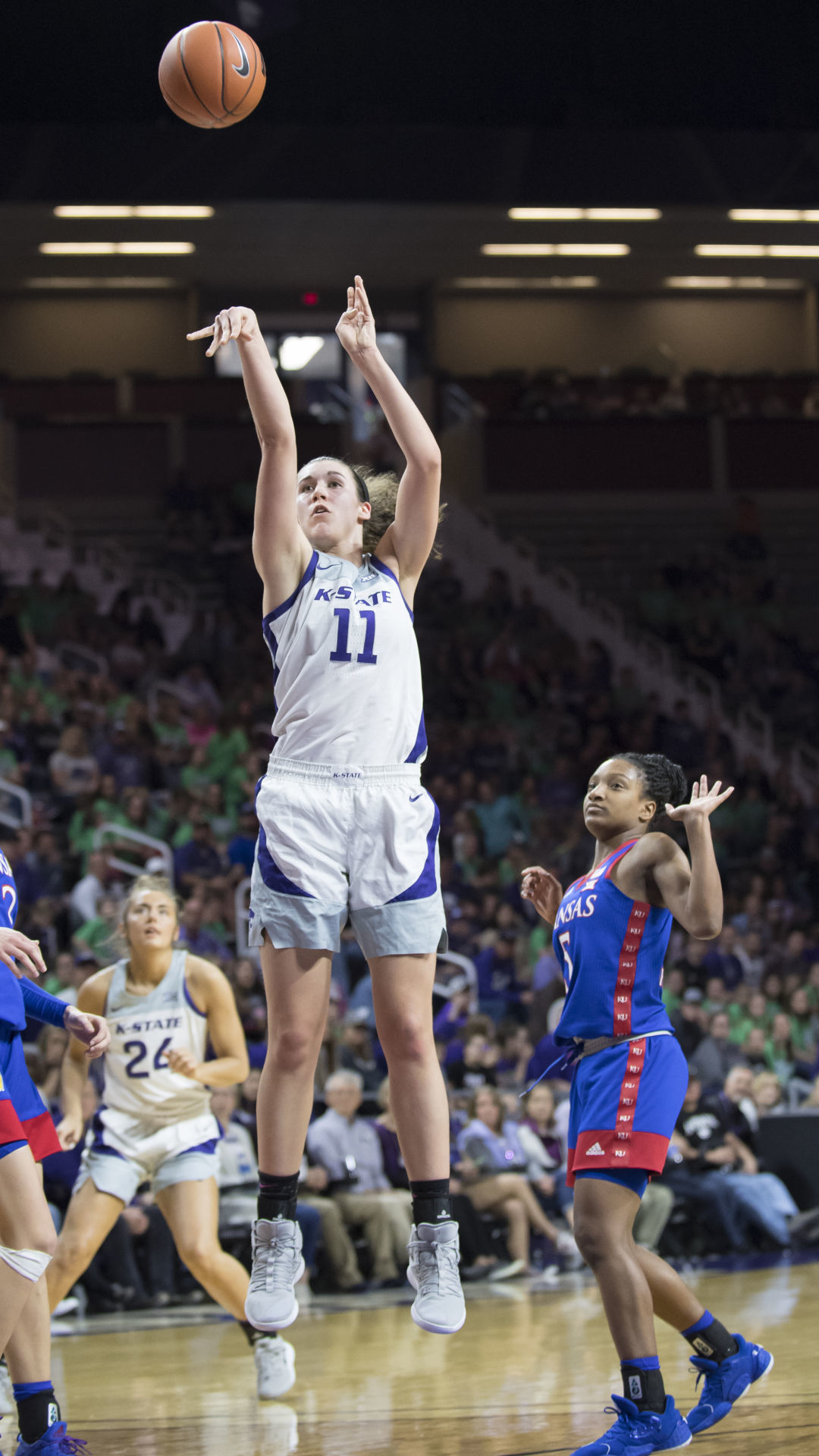 Peyton Williams attempts a shot during K-State's game against Kansas at Bramlage Coliseum. Williams' college career came to a close when the Wildcats' postseason tournaments were canceled.

Kansas State head coach Jeff Mittie gives his team hand signals from the sideline during the third quarter of K-State’s game against Texas-Rio Grande Valley. The Wildcats’ season came to an abrupt end when the Big 12 and NCAA canceled their postseason tournaments.

Peyton Williams attempts a shot during K-State's game against Kansas at Bramlage Coliseum. Williams' college career came to a close when the Wildcats' postseason tournaments were canceled.

An end can come in many forms. For the Kansas State women’s basketball season, it took the appearance of K-State assistant coach Chris Carr.

Head coach Jeff Mittie was standing off to the side in Kansas City’s Municipal Auditorium on Thursday, watching his team run through its scout defense when he noticed Carr walking toward him from half court.

At first, Mittie thought Carr was coming over to point out something in the Wildcats’ defense. Instead, Carr delivered a very different message.

“They just called it,” Carr said.

Mittie was stunned. One day earlier, he had been fielding questions about his team’s preparedness to play in an arena without fans in the stands for K-State’s upcoming Big 12 tournament game against Iowa State. Not playing at all wasn’t a scenario Mittie had even considered.

His team took an afternoon bus ride to Kansas City, arriving in time to watch the K-State men’s basketball team take on TCU. It was March 11, and everything still was relatively normal.

Even before they arrived at the Sprint Center for the men’s game, the women’s team already was working under special circumstances. The Wildcats were moved to their own section, away from other fans. The Big 12 already had announced that night’s games would be the last time fans could attend for the remainder of the tournament. Now, the conference was trying to isolate players from possible infection by providing a buffer zone from the general public.

“From that point on, we knew it would be different,” senior Peyton Williams said. “We hoped (the tournament) would continue, but we also knew there was a possibility it wouldn’t continue.”

While they watched the men’s game, the NBA suspended its season, becoming the first major North American sports league to do so. Still, the Wildcats continued to prepare for Friday’s scheduled game.

Thursday morning, it was business as usual for Mittie. He woke up early, started to work, finished his notes and watched film. Then, he and the team left for Municipal Auditorium to begin that day’s practice.

Not long after that, Carr was telling Mittie the Big 12 Conference tournament had been canceled. Mittie walked over to the television crew in attendance to make sure he’d heard his assistant correctly.

“’Yeah, they just pulled the plug,” the crew responded. “They’re not playing any games.’”

Mittie turned to see K-State athletics director Gene Taylor walking onto the floor. With less than 10 minutes left in the practice, Mittie called his team to half court.

“It was weird because he never cuts things short,” Williams said. “Then we saw Gene next to him and I think as soon as we saw that, we all knew.”

Taylor came to the floor to personally tell the team it wouldn’t be participating in the Big 12 tournament. Nobody would be.

“The seniors took it the hardest, obviously, but the team was right there with them,” Williams said. “It was just a somber moment for everybody.”

The players and coaches took time to grieve, crying and hugging as the realization that they wouldn’t be playing for their conference championship started to sink in. Then, the team started to spread the message.

Savannah Simmons’ family had just arrived in Kansas City from their home in Maryland. Other players’ families had yet to make the trip and were stuck in limbo, wondering whether they should travel to Kansas City. From there, the team went back to its hotel to pack its bags. It was then that they started to process what had just happened. For Williams, that meant staring at the ceiling and wondering if her college career was over.

The answer came a few hours later when the Wildcats were bussing back to Manhattan. It was then the NCAA called off the NCAA Tournaments and NIT/WNIT entirely, effectively ending the college basketball season.

For the seniors, it likely meant their college careers had concluded. For the team as a whole, it meant a season’s worth of practices would not be rewarded with a postseason bid.

Regardless, an argument could be made that K-State was playing its best basketball entering the Big 12 tournament. The Wildcats won seven of their final 10 games in the regular season after finding an identity in their bruising offense and high-pressure defense.

K-State’s first-round opponent, Iowa State, was coming off a win over No. 3 Baylor. If the Wildcats had been able to beat the Cyclones, they likely would have faced the Bears in the Big 12 semifinal. If — and that’s a big if — K-State managed to win that game, the team would have been 18-13 on the season and competing for a conference championship while simultaneously being one of the hottest teams in the country.

It’s unlikely the Wildcats wouldn’t make the NCAA Tournament in that scenario.

Instead, K-State arrived back in Manhattan with its season no longer part of its present, but part of the past.

The idea that her college career might be over is still settling in for Williams.

“It was really hard to say I’m done being a college athlete because it’s gone on so long,” Williams said. “It’s still not registered fully yet. ... It doesn’t feel like a reality yet.”

Williams returned to Topeka to be with her family following the announcement that Kansas State was suspending in-person classes for the remainder of the spring semester. It appears as though she has seen her last day as a student-athlete on the Kansas State campus.

A day after the cancellations, Mittie took to Twitter to advocate for allowing seniors one more year of eligibility, writing that the “NCAA has many tough decisions ahead of them. Seniors have worked their entire career to chase postseason dreams, National Championships, and Cinderella stories. I cannot think of one negative to allowing Seniors one more year of opportunities!!”

Mittie’s stance has not changed. The coach believes there should be a one-year exemption on scholarship allocations to allow teams to include this year’s seniors as well as the incoming freshman class.

“I just think that in some cases, you have seniors who have never played in the tournament and this is their chance,” Mittie said. “Or never played in the postseason. Or maybe went to a program that was really bad and this was their first chance to advance in a conference tournament. These are all things that I don’t think there is an easy answer (to), but I don’t think there’s a negative of extra education being offered.”

If Mittie’s request becomes a reality, K-State would have three seniors eligible to return. The group consists of Williams, Angela Harris and Jasauen Beard.

For Williams, the hypothetical opportunity to return can’t be ruled out.

“It would depend on a lot of things,” Williams said. “I’m not sure I could make it through one more year of school. But I also love the team and I think the other seniors on the team would be all for it.”

Williams’ return is a long shot.

Now, the Wildcats are dealing with the end of their season — just when it seemed like the best parts were about to start.

“We were winning big games, NCAA Tournament-type games at the end,” Mittie said. “This team continued to get better and found its stride later than we wanted, but found its stride at the right time.”

Ad# 1969 Program Support
The Family of Dale Budden would