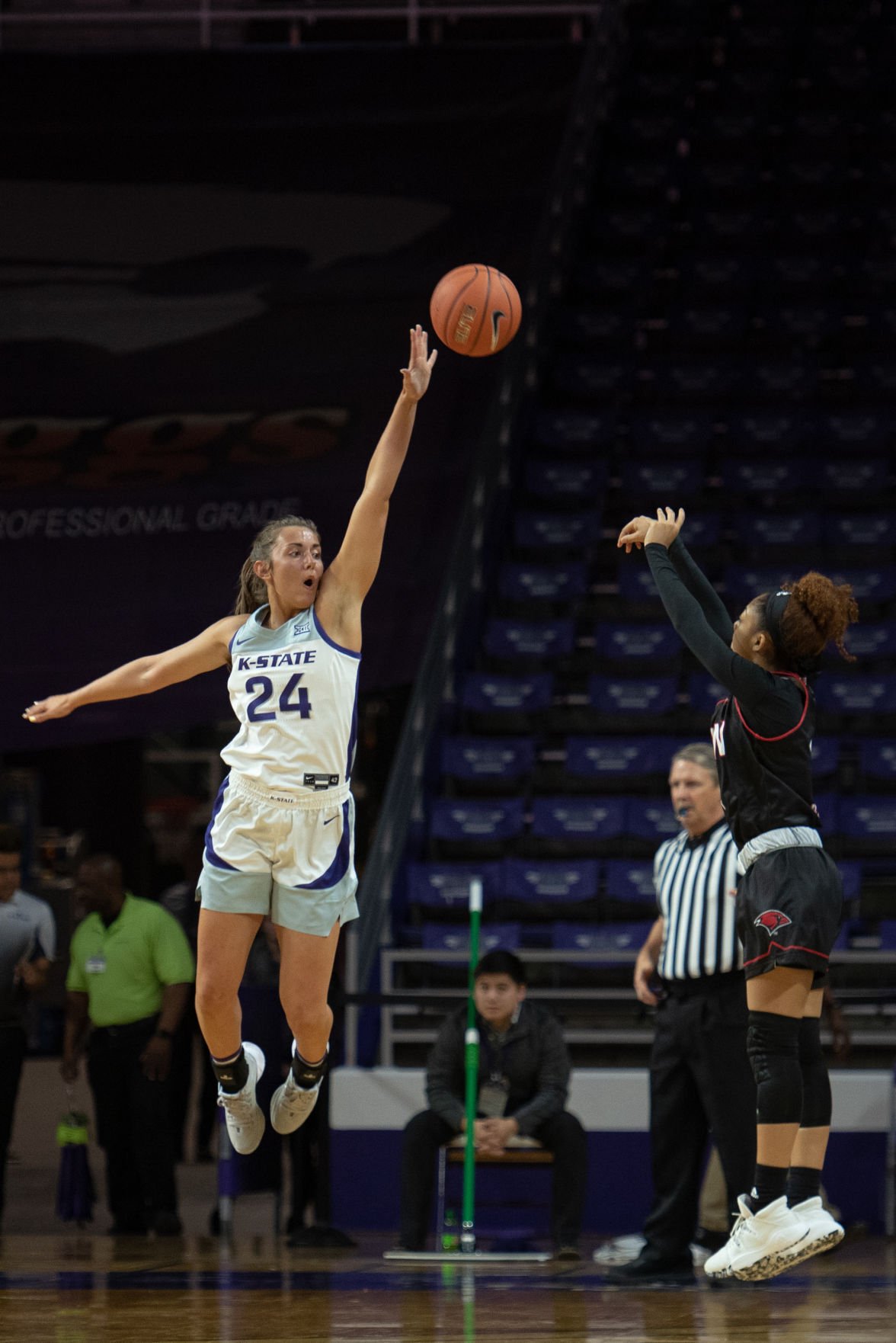 Kansas State’s Emilee Ebert (24) attempts to block a shot from Incarnate Word’s Destiny Jenkins (4) during a game last season at Bramlage Coliseum. Ebert, a star in multiple sports during her days at nearby Frankfort High, has stepped up her play on defense this season. 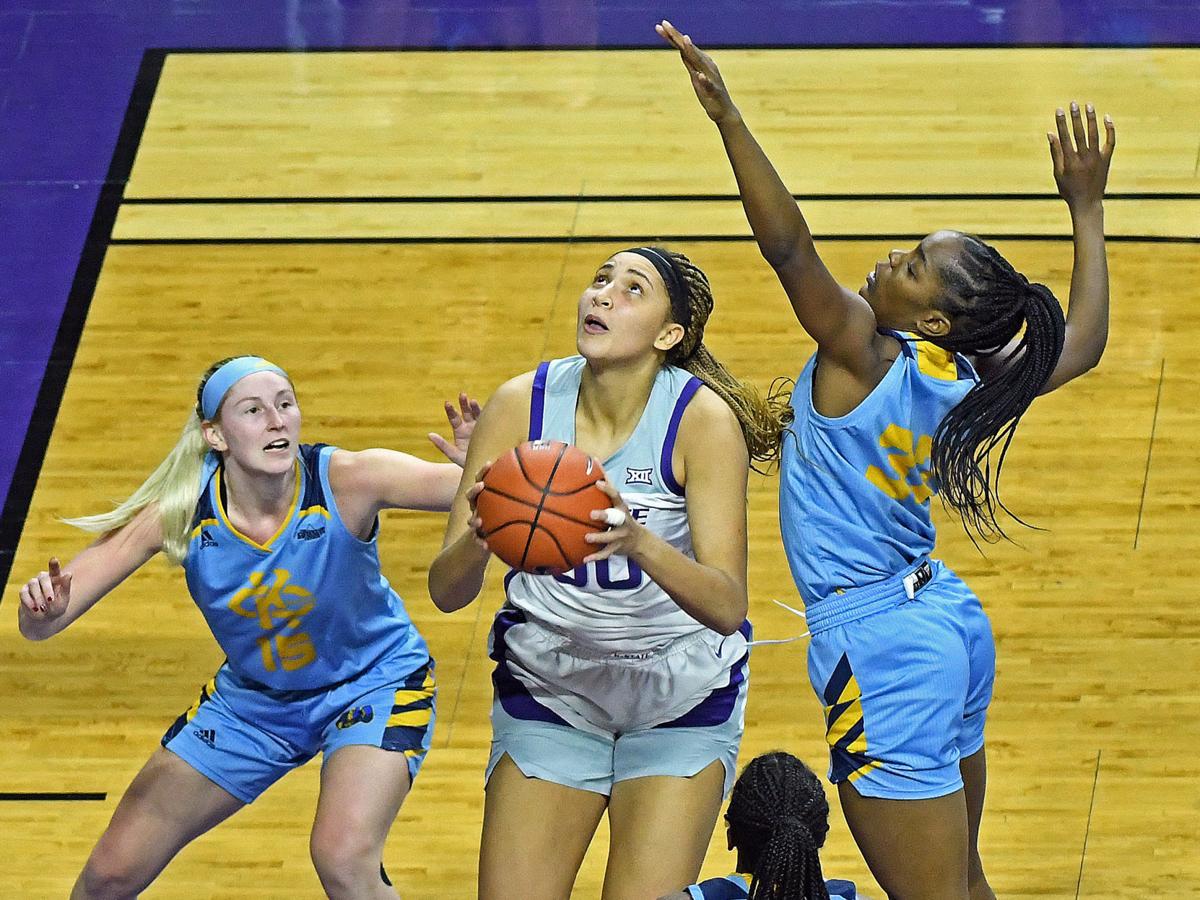 K-State center Ayoka Lee (middle) goes up for a shot against Kansas City Monday at Bramlage Coliseum. Lee scored a career-high 31 points in the game.

Kansas State’s Emilee Ebert (24) attempts to block a shot from Incarnate Word’s Destiny Jenkins (4) during a game last season at Bramlage Coliseum. Ebert, a star in multiple sports during her days at nearby Frankfort High, has stepped up her play on defense this season.

K-State center Ayoka Lee (middle) goes up for a shot against Kansas City Monday at Bramlage Coliseum. Lee scored a career-high 31 points in the game.

In the blink of an eye, Kansas State women’s basketball’s non-conference play is over.

In a little over two weeks, the Wildcats sprinted through seven games. The team had little time off between games, sometimes no more than a day.

In that span, K-State went 5-2, defeating then No. 22 South Dakota State and taking current No. 9 Kentucky deep into the fourth quarter before coming up short.

The team also played a few puzzling games, including being outclassed by Idaho State and scoring just 47 points against Central Arkansas.

Now, the Wildcats are set to open play against Iowa State on Friday in Ames. Coincidentally, the Cyclones are the same team K-State was set to play in last season’s Big 12 Tournament before the game and the season were canceled due to the coronavirus pandemic.

Despite its briefness, K-State’s non-conference showed many notable aspects of this team, as well as issues it will need to address moving forward.

While Kansas State’s scoring has not been a strong suit — the Wildcats rank last in the Big 12 in total offense, averaging just 59.1 points per game — the team’s defense has given its opposition fits.

Despite the team’s success, head coach Jeff Mittie believes his team has yet to reach its full potential.

“Our defense has still got a lot of work to do,” Mittie said during a Zoom call Wednesday. “I think we’re making improvements. I’m not quick to make decisions after a seven-game situation.”

Mittie did concede his team has done a better job of playing team defense and preventing opponents from creating driving lanes to the basket. To this point, teams are shooting just 40% from inside the arc. Beyond the arc, only 24% of their shots are falling.

A major piece of K-State’s defensive prowess is the play of sophomore guard Emilee Ebert. The Frankfort native has been among K-State’s most versatile defenders, using her 6-foot frame and long wing span to shut down opponents both on the perimeter and in the paint.

Ebert actually leads the team in blocks with 11, two more blocks than teammate Ayoka Lee, who averaged four blocks per game as a freshman.

“My mentality is just to do my job,” Ebert said after Monday’s game against Kansas City. “I know what I’m supposed to do, so I just go out there and do it. My job is to not let them score, so I’m not going to do that.”

Ebert, who is averaging 28 minutes per game, has emerged as a good playing partner with junior guard Chrissy Carr. Both have the ability to rotate from the perimeter into the paint, giving Mittie solid options to defend his opposition’s top guard or forward.

“I think Ebert’s made big strides defensively this year,” Mittie said. “She was a player last year that was a young player and needed to make improvements. She’s worked hard at that end.”

With redshirt-junior guard Rachel Ranke continuing to get back up to speed after a season-ending injury last year, K-State could soon have three guards that could all function as good defensive players at the minimum and elite defensive stoppers as their ceiling.

“I think it’s great for Emilee that she’s come out of her shell this year,” Carr said. “It’s been amazing to watch. I’m very happy for her. She brings a lot of energy on the defensive end and does a lot of things that most people are unwilling to do with aggressive plays. She’s not only stepping out of our shell, but she’s doing it in ways that our team needs.”

While Lee is leading the team with 17.8 points and 8.2 rebounds per game, the rest of Kansas State’s forwards and centers have struggled. The other three players — Laura Macke, Taylor Lauterbach and Ashley Ray — that play regularly for the Wildcats in the paint are combining for just 10.1 points and 12.4 rebounds per game.

Much of that production stems from Macke, who has played valuable minutes for Kansas State as a bridge player between the bench unit and starting group. Macke has filled in as both a standard forward and a center when K-State opts to go with a smaller group. She is averaging 5.4 points and 5.1 rebounds in 19 minutes per game.

Lauterbach and Ray, however, have struggled. Outside of K-State’s game against Central Arkansas, Lauterbach has yet to score above four points in a game. Ray plays a much more limited role, playing just seven minutes a game and scoring one point on average.

The front court’s depth showed when Lee went down with a sprained ankle in the first quarter of the Kentucky game and was forced to miss the remainder of that contest as well as K-State’s following two games. It’s no coincidence that the Wildcats went 1-2 in that stretch, which includes the Kentucky contest, and had their lowest scoring game of the season as well.

Had Lee not made a surprising recovery — Mittie indicated the team initially thought she would be out for up to three weeks — and returned exactly one week after suffering the injury, there’s a good chance K-State’s record would not be what it is right now.

K-State is still working Lee back up to her usual minutes. In the meantime, the Wildcats will need the rest of their bigs to start stepping up their game when Lee isn’t on the floor.

“We’ve got to play stronger and tougher,” Mittie said. “Lauterbach is early in her career and is in a bit of a baptism by fire. ... Just that growth of playing tougher, playing physical, playing through contact.

The front line, that’s a big difference. Ashley and her both, Laura Macke, that group really needs to be more physical down there.”

The Cyclones were picked one spot ahead of K-State in the Big 12 preseason poll, as Iowa State came in at No. 3.

Much of that prediction had to do with the play of junior guard Ashley Joens.

Joens entered the season as a unanimous All-Big 12 preseason first team member after averaging 19.9 points per game as a sophomore. This season, she has taken her game to another level, pouring in an average of 27.3 points per game. That figure is the best of any Big 12 player and the seventh best average nationally.

“I’d like to see her on the bench a lot, quite honestly,” Mittie said. “I don’t know that there’s any way to really stop her. I think it starts with not putting her at the free throw line, but everybody says that and she still gets there eight to 10 times per game. ... I think you just want to make her points as tough as possible.”

Joens is averaging almost eight free throws per game and is hitting on 90% of her attempts from the charity stripe. Those attempts can serve as a double whammy for opposing teams, as they turn into easy points for Iowa State while also putting opposing teams’ guards in trouble.

Carr echoed Mittie’s statement about preventing Joens from reaching the free throw line. There is a high likelihood that Carr will be one of Joens’ main defenders come Friday night.

While Joens’ has put points on the scoreboard in bunches for Iowa State, the Cyclones’ defense has left much to be desired. Iowa State ranks ninth in the Big 12, allowing an average of 68 points per game.

Combined with the Cyclones’ smaller lineups — Iowa State’s tallest player is 6-foot-3 — the game appears primed for a standout performance from Lee. Lee is coming off the best game of her career after scoring 31 points and grabbing 14 rebounds.