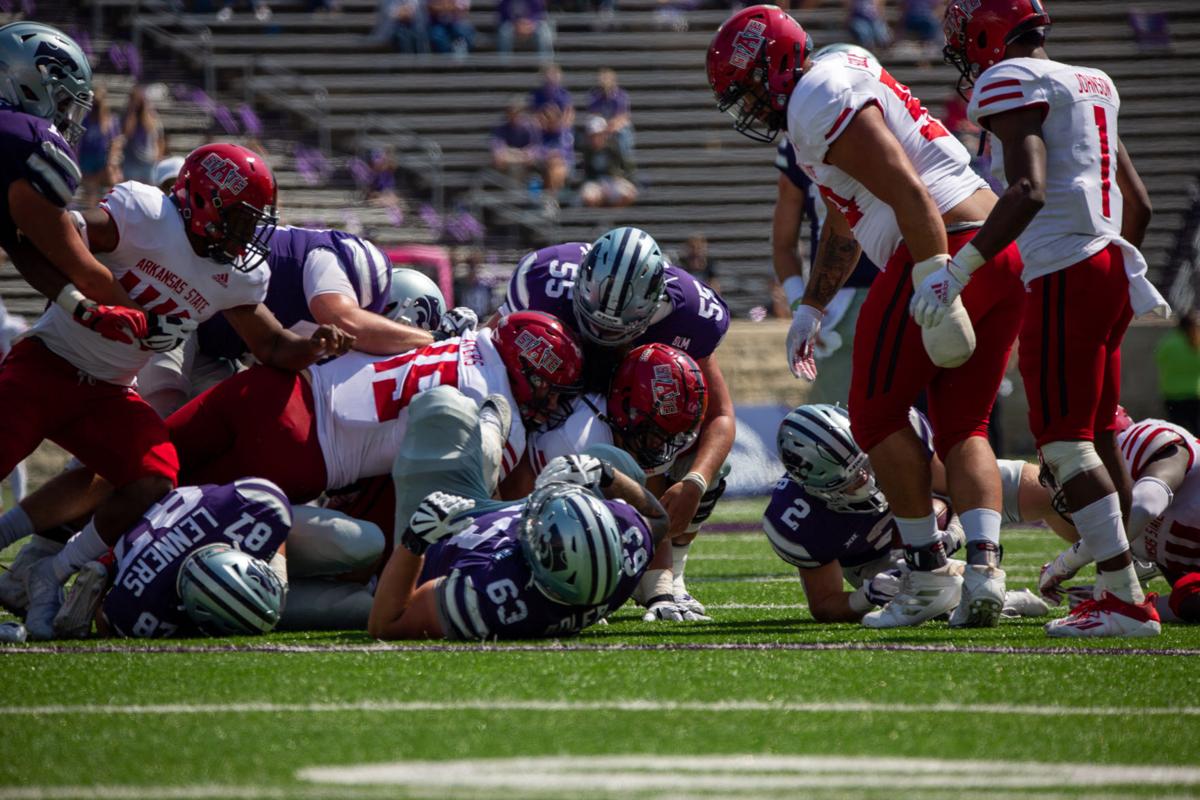 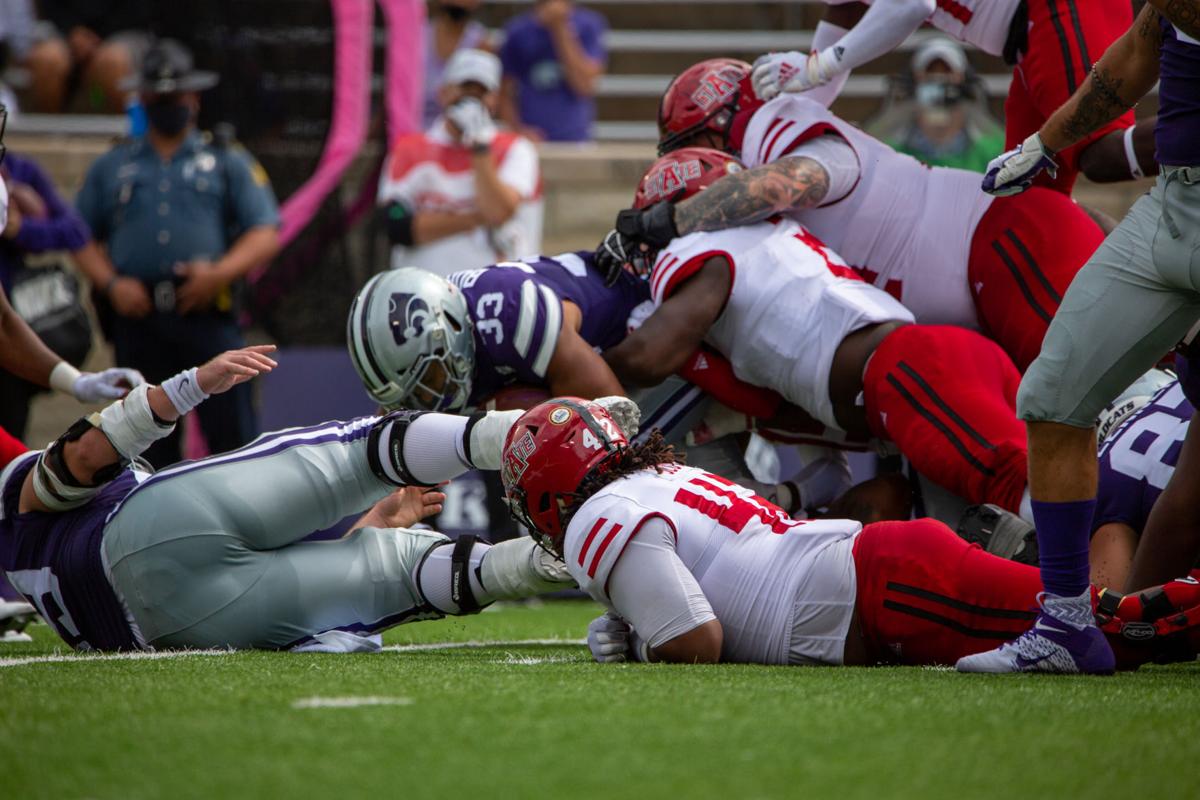 Arkansas State defenders pile onto K-State running back Tyler Burns during Saturday’s game. The inexperienced Kansas State offensive had its share of issues during a 35-31 loss.

Arkansas State defenders pile onto K-State running back Tyler Burns during Saturday’s game. The inexperienced Kansas State offensive had its share of issues during a 35-31 loss.

For the umpteenth time Saturday, Skylar Thompson found himself on the ground.

The Kansas State quarterback had just been forced to chase down an errant snap that soared past him midway through the fourth quarter. When he finally fell on the ball, Kansas State had lost 23 yards. They went on to lose the game in upset fashion to Arkansas State, 35-31.

Whether it was the errant snap or several miscommunications, Kansas State’s offensive line didn’t play well enough for the Wildcats to win.

“We just did not block well enough,” K-State head coach Chris Klieman said. “We didn’t communicate well enough, and for us to be successful we have to be better up front, and those guys know that.”

Against a Sun Belt opponent that came in as a double-digit underdog, Kansas State’s offensive line was thoroughly whooped. The Wildcats totaled only 91 rushing yards (2.3 yards per carry), while surrendering eight tackles for loss.

When Kansas State dropped back to pass, the line wasn’t much better. Arkansas State notched two sacks and pummeled Thompson throughout the game. The punishment took its toll, as Klieman noted postgame that Thompson’s mobility was compromised as the game wore on because of the hits he was taking.

Kansas State’s offensive line entered the season as one of the team’s biggest question marks. The group lost all five of its 2019 starters to graduation, leaving a largely inexperienced squad to move into the lineup.

It didn’t help matters when starting center Noah Johnson injured his right arm on the Wildcats’ first series of the game. Klieman tried to move right guard Ben Adler to center and plug Johnson in at right guard, but when it became clear that Johnson’s injury was too severe to play with, Klieman brought in backup center Hayden Gillum to take over snapping duties.

“Noah tried to come back in, knew he couldn’t snap the ball so he tried to play some guard and then he figured out he couldn’t do it,” Klieman said. “Then we brought in Hayden. Once again, I thought Hayden Gillum did a nice job, but we just didn’t move them, bottom line.”

The line’s inexperience showed as Kansas State tried to establish its ground game throughout the first half. Despite a few electrifying runs from freshman running back Deuce Vaughn, Arkansas State largely kept the Wildcats’ ground game in check. The Red Wolves limited K-State to 59 rushing yards, 20 of which came on one run from wide receiver Chabastin Taylor.

The Red Wolves’ defense isn’t exactly a juggernaut when it comes to stopping the run, either. In their first game against Memphis, they allowed 227 rushing yards.

“They were switching in and out of their three and four-down front,” Vaughn said. “We knew that they would do that because we’re a pretty power-run heavy team, and they would always screw down (on Anthony Switzer), who was their free safety. They had a pretty stout defensive lineman. ... We have to shore up and practice whenever we get back out onto the field on Monday and get to practicing everything, just things we are going to have to look at and correct.”

To alleviate some of the problems with the running game, Klieman asked Thompson to drop back more to pass. With the large number of Arkansas State players committed to playing close to the line of scrimmage, the majority of Kansas State’s passing opportunities were of the deep variety.

While the Wildcats were able to reel off several gains during the game, relying on deep passing was challenging with a line that struggled to hold its blocks. Thompson repeatedly was hit as soon as he released the ball throughout the game.

“It makes some things tough, but that is part of being a quarterback,” Thompson said. “I thought I did a good job of hanging in there and making some throws today. ... There were multiple times that I could have protected myself better. There are a lot of things that go into that stuff. It is all a learning experience.”

To his credit, the senior quarterback showed poise, completing 17 of 29 passing attempts for 259 yards and two touchdowns. But the punishment limited Thompson’s ability to move the ball on the ground, something that became more and more apparent as the game wore on. With under 20 seconds remaining and Kansas State on its own 49-yard line needing a touchdown, Thompson took a snap and dropped back to pass. Out of the corner of his eye, he saw ASU outside linebacker Fred Hervey break through the right side of the line.

Thompson tried to run away from the oncoming pressure, but the repeated blows had slowed him down just enough to allow Hervey to catch him from behind and wrestle him to the ground.

The sack siphoned off eight seconds from the clock and 4 yards from Kansas State’s progress. It turned an already hard task of coming back into an impossible one.

Kansas State’s offensive line issues don’t have an immediate solution, as there aren’t any experienced veterans in the group to lean on.

The only answer is to give the group time to develop and jell. That’s time the Wildcats do not have with a trip to face No. 5 Oklahoma looming in two weeks.

“It has to be better as a whole,” Klieman said. “We didn’t win the line of scrimmage.”

Saturday was supposed to represent a myriad of things for Kansas State’s football program. A semblance of normalcy, playing a game in the midd…