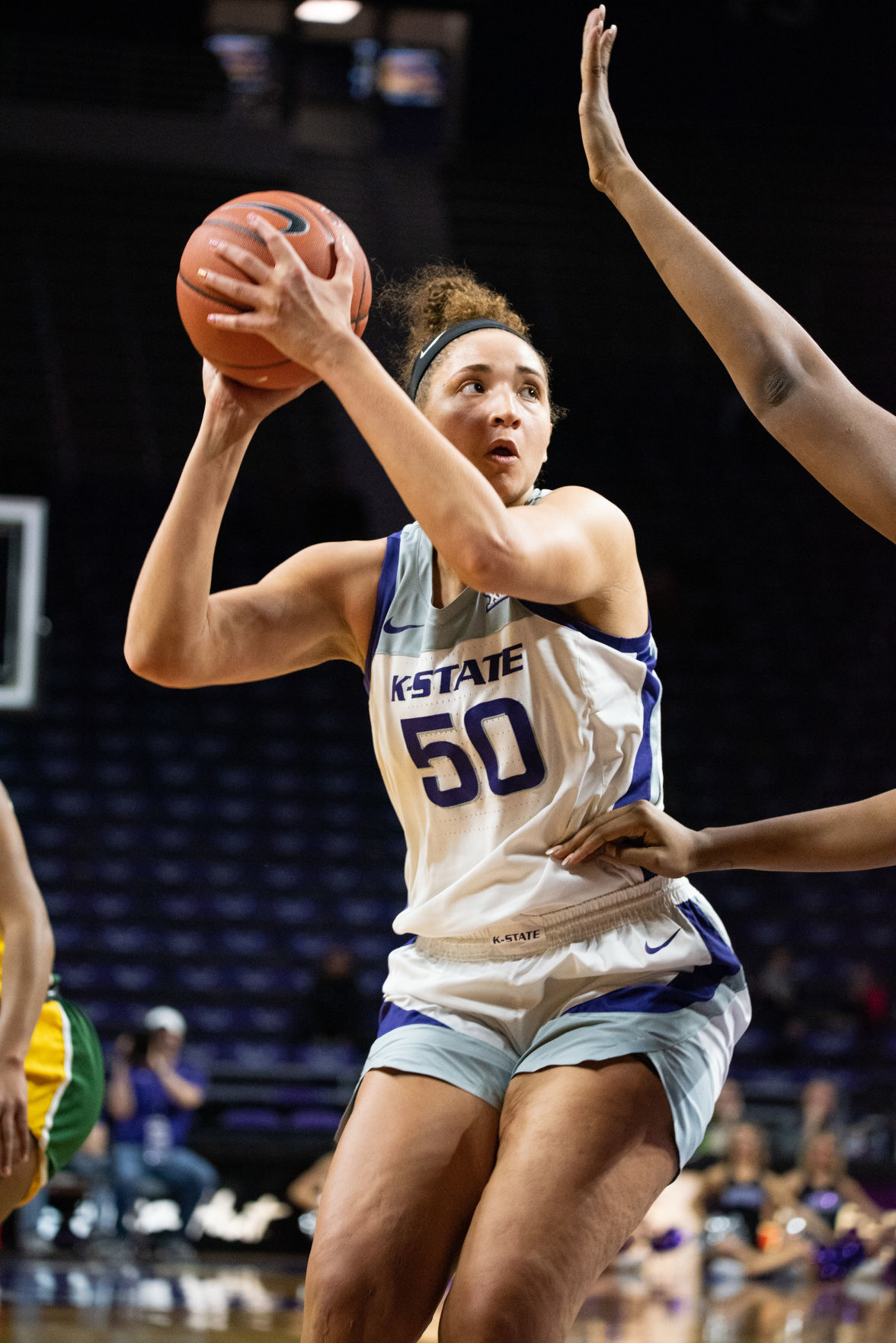 Kansas State’s Ayoka Lee prepares to attempt a jump shot during the first quarter of Saturday’s game against No. 2 Baylor at Bramlage Coliseum. Lee posted game-highs in both points (14) and rebounds (12) in the Wildcats’ 54-40 loss. 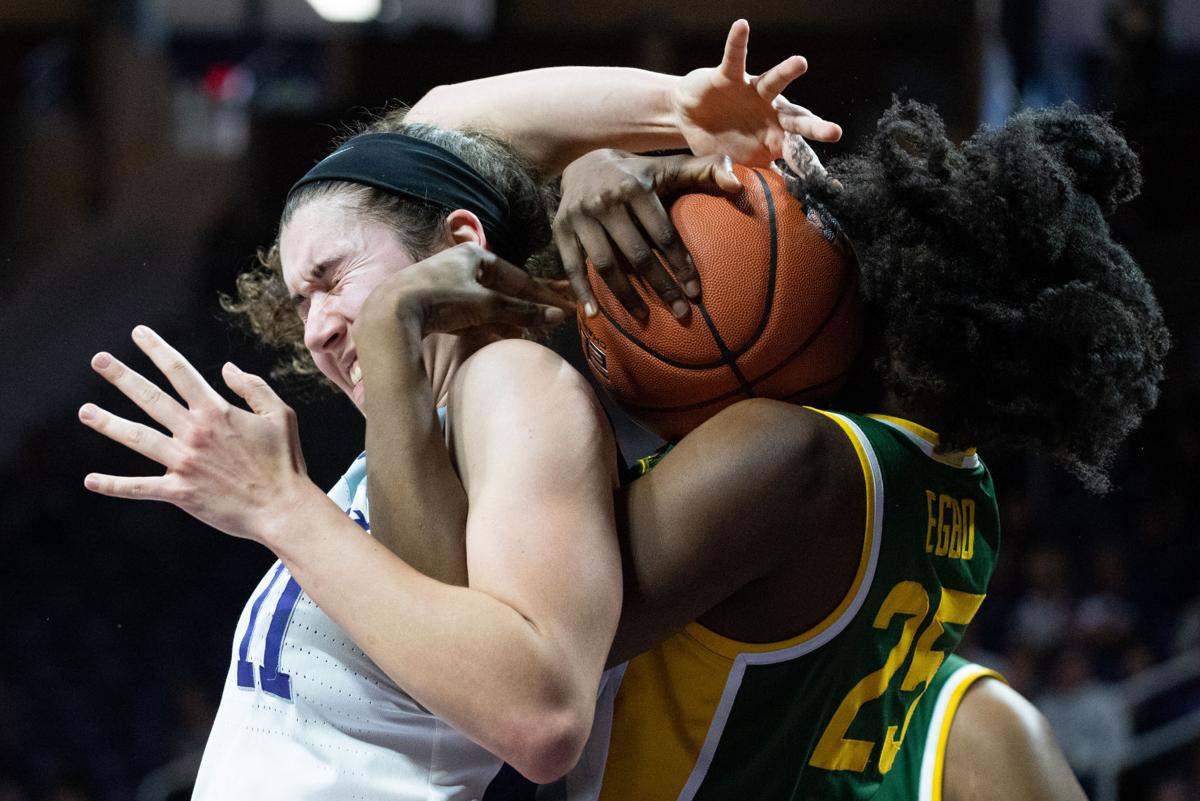 Kansas State’s Peyton Williams (11) and Baylor’s Queen Egbo (25) get tangled up while going up for a rebound during Saturday’s game at Bramlage Coliseum. Officials assessed a foul on Egbo during the play.

Kansas State’s Ayoka Lee prepares to attempt a jump shot during the first quarter of Saturday’s game against No. 2 Baylor at Bramlage Coliseum. Lee posted game-highs in both points (14) and rebounds (12) in the Wildcats’ 54-40 loss.

Kansas State’s Peyton Williams (11) and Baylor’s Queen Egbo (25) get tangled up while going up for a rebound during Saturday’s game at Bramlage Coliseum. Officials assessed a foul on Egbo during the play.

The challenge Kansas State faced in playing No. 2 Baylor on Saturday is over.

The Wildcats fell 54-40 at Bramlage Coliseum. They missed too many shots, missed too many opportunities, produced too few stops and now they are back below .500 for the third time this season.

Now, ahead of K-State’s road contest against West Virginia on Tuesday — which will tip off at 6 p.m. and air on WV Mountaineer TV — the real task the Wildcats face is deciding what to take from the loss and what to flush.

Perhaps not, but K-State forwards Ayoka Lee and Peyton Williams — the team’s two leading scorers — did point out a few nice trends they would like to keep up.

For one, K-State (10-11, 4-6 Big 12) kept the game interesting. The Wildcats drew within 10 midway through the fourth quarter, and while neither team played particularly well on offense, that seemed to benefit the hosts.

This is where things begin to turn murky, though. Lee said she liked the way she played, but it came in a loss.

“Obviously I didn’t shoot as well as I could have, and fouls were a problem,” said Lee, who has now recorded double-doubles in four of her last five games. “I’m glad I could contribute that way, but I think a lot of it is that we are trying to build off the good, but the outcome is still that we lost. I think right now it’s just trying to build off the good and take that to the next game.”

Here’s some more good K-State can build on: Defense.

The Wildcats held the Bears to their lowest point total this season, and their lowest since December 2015. Remember, these are the defending national champions, who entered the game ranked third nationally in scoring offense, averaging 84.4 points per game.

Depending on who you ask, the fact that K-State limited Baylor to less than half its season average reveals one of two things.

Baylor coach Kim Mulkey said it wasn’t K-State’s defense — it was just an “ugly game.” Mittie disputed that assessment, explaining that he liked the way his group defended, especially late, when the Wildcats had a real chance of coming all the way back from the 21-point deficit they once faced.

This is why looking deeper than the shooting numbers each team posted — Baylor shot 38% from the field, K-State 21% — helps to make sense of the big-picture outlook for the Wildcats.

Mittie expanded on that thought, though, which is important.

“I thought our group covered up the defensive end very well,” Mittie said. “Especially late, we were really covering up some things late. Peyton got some steals in there. (Jasauen) Beard was active in that stretch. There were some really good things.”

Now for the parts of the game the Wildcats will want to forget.

The biggest: K-State shot 0-for-18 from beyond the arc. Guard Chrissy Carr, who entered fresh off scoring 14 fourth-quarter points earlier in the week, misfired on each of the six treys she tried. Both Beard and point guard Angela Harris struggled through 0-for-4 showings from deep.

There’s nuance here, of course, because sometimes players miss shots they usually make and sometimes they take ill-advised shots that stand little chance of going down.

Mittie said he saw both against Baylor. The problem was that the Bears play a defense that ranks tops nationally in field goal percentage.

“We’re still hesitating a little bit on making those passes,” Mittie said, “and when you hesitate for half a second, they have great closing ability, whether it be the post or whether it be a perimeter player. That probably is impacting our windows to shoot. Baylor closes those small windows very quickly.

“I thought that the best shots were early today. Early to start this game, I thought we were getting exactly the kind of shots we talked about getting. We just weren’t finding the bottom of the net very much. Then I think Baylor adjusted to what we were doing and that got harder and harder.”

The Wildcats will get a chance to do so Tuesday against the Mountaineers, to whom they dropped a nine-point home decision in early January.

“I think our group did some things well today. I think we need to do some things better going forward,” Mittie said. “That’s going to be our emphasis.”

The award ties Lee with Oklahoma alum Courtney Paris for the most times to win Freshman of the Week honors.