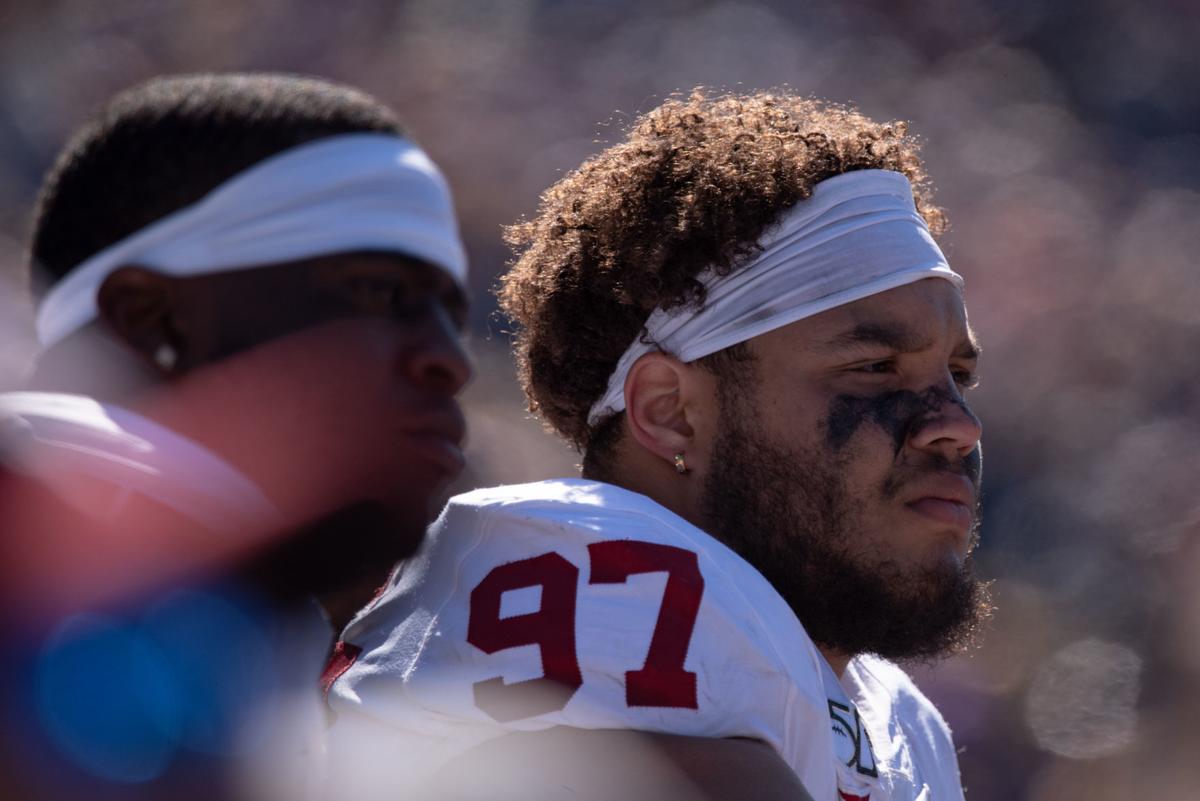 Oklahoma’s Marquise Overton (97) sits on the OU sideline during the fourth quarter of Kansas State’s 48-41 win at Bill Snyder Family Stadium on Saturday. Multiple K-State players said their opponents came in with an ego and talking trash, but as the game went on, the Sooners began to talk less and less. 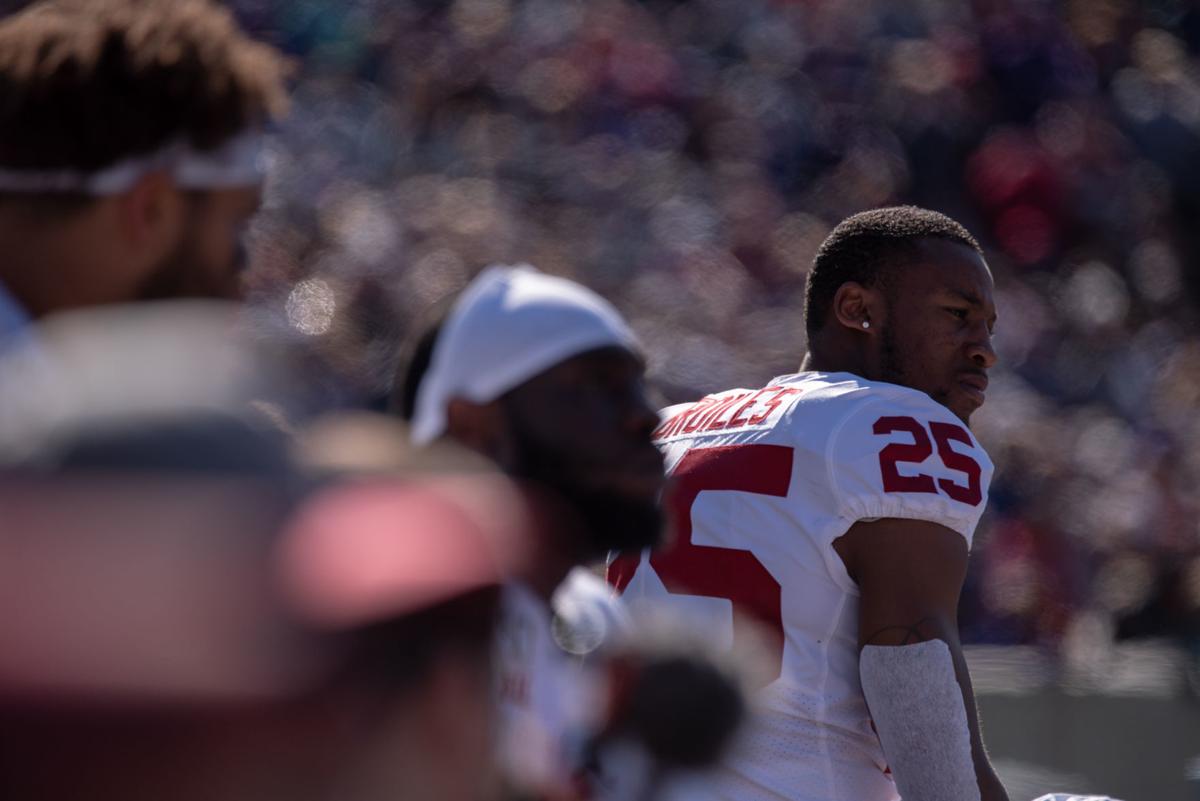 Justin Broiles (25) sits on the OU sideline during the fourth quarter of Kansas State’s 48-41 win over No. 5 Oklahoma on Saturday.

Oklahoma’s Marquise Overton (97) sits on the OU sideline during the fourth quarter of Kansas State’s 48-41 win at Bill Snyder Family Stadium on Saturday. Multiple K-State players said their opponents came in with an ego and talking trash, but as the game went on, the Sooners began to talk less and less.

Justin Broiles (25) sits on the OU sideline during the fourth quarter of Kansas State’s 48-41 win over No. 5 Oklahoma on Saturday.

In his three years at Kansas State, which included redshirting as a freshman in 2017, there’s no team he’s seen — or in this instance, heard — that talks more trash than Oklahoma.

As Hubert put it, the No. 5 Sooners sauntered into Bill Snyder Family Stadium Saturday morning with ego in excess. Wrapped up in that was an offense that Hubert said likes to let opponents knowhow good it is. Unremittingly. He learned that last season, when the Sooners had their way with the Wildcats in a 51-14 win that was even more lopsided than the score indicates.

So heading into Saturday’s matchup, Hubert was prepared for any verbal volleys that might come his way.

“It kind of got me excited, got me ready for it,” he said. “It’s a challenge. If someone is running their mouth 24/7 in your ear, that just makes you want to play harder and go out there and get the win even more. It’s not just me. The rest of the 10 guys on defense felt that same way.”

It showed: K-State’s defense answered the bell, handing previously unbeaten Oklahoma its first loss of the season. The Wildcats held the Sooners to their lowest rushing total (102 yards) of the season. At times, the Wildcats humbled Sooner quarterback Jalen Hurts and Co.

On back-to-back drives in the third quarter, Oklahoma went three-and-out on consecutive possessions. The same Sooner offense that entered averaging 9.6 yards per play, on pace to shatter a single-season FBS record it set last season, when it averaged only 8.6 yards per snap. It was part of a dominating 15 minutes of football: K-State pitched a shutout, beating Oklahoma 17-0 in the third stanza.

The lack of point production was unheard of for the Sooners prior to that period, because they had scored at least three points in 30 consecutive quarters to begin the 2019 campaign. With good reason, then, “they were trash talking the whole time,” Hubert said.

That is, until K-State took a 48-23 lead, when Hubert noticed a shift in Oklahoma’s demeanor.

Skylar Thompson expected the same type of conversations with Oklahoma’s defenders. Once again, it circled back to last season’s contest in Norman, Oklahoma.

“I’m not sitting here (judging) anybody or judging anything. That’s just how they are. They talk quite a bit,” said Thompson, who scored four times on the ground in the victory. “They do think very highly of themselves. Rightly so. They’ve earned that.”

Thompson made it clear the Sooners’ success in the past was irrelevant, though.

“We weren’t scared of nothing. I wasn’t scared of nothing,” he said. “I’m not going to back down from something like that. That’s the type of stuff that, (when) people talk trash to me, that makes me play better. I love when people talk and say stuff. That just fires me up and brings out the competitive juices even more in me, so I invite that stuff and don’t let it be a distraction, most importantly.”

“(We) did a great job of being smart, of not retaliating on some things,” he said, “and not getting stupid penalties.”

Not that it surprised Hubert.

“We’re not a big talking team. We just go out there and do our business and do our thing and play hard,” he said. “That’s the main thing that we need to do. We’re not all about that trash talking.”

Despite being a massive underdog in oddsmakers’ minds Saturday, a confidence — a quiet one — emanated from the top. Before kickoff, K-State head coach Chris Klieman’s message was simple.

“We told them before the game that we belonged on this stage,” he said, “and told them to continue to believe.”

After falling behind by scores of 10-0 and 17-7 in the first quarter, K-State could have folded. But Klieman said he never saw doubt creep in. Quite the opposite.

Klieman said he knew his team had a chance to pull itself off the mat and author a come-from-behind victory; while the scoreboard showed the Wildcats were losing, they were winning the battle up front.

Senior linebacker Eli Sullivan saw a similar resilience — stiff upper lips, if you will — from his fellow defenders.

“The whole first half we were balling,” he said. “We got up by (four) before the end of the half ... (and) nobody — how can I say it? — nobody had a look on their face like they were scared or they were nervous or anything. Everybody was ready to compete, ready to get back out there and get their next chance. So just seeing everybody’s faces and how confident they were and ready to get back out there, I liked the energy we had.”

After the break, that energy carried over. Along with the back-to-back three-and-outs, K-State also forced and recovered a fumble on a kickoff in the third quarter. As the deficit continued to grow, Oklahoma set foot in foreign territory. Before Saturday, it had trailed only one time this fall: Kansas jumped out to a 7-0 lead at home Oct. 5. The Sooners responded by scoring the next 42 points.

Staring up and seeing the margin getting bigger and bigger in the third quarter, Kansas State receiver Joshua Youngblood noticed, seemed to take its toll on the visitors.

“I looked over at their bench and all their players’ heads were down,” said Youngblood, a true freshman. “That’s when the (blood) was in the water. I was like, ‘We got it. We got them.’ It was a great feeling.”

The Sooners did have a few more salvos in them, however, putting up 18 points — the most by either team in any quarter Saturday — in a furious final-period comeback, drawing within seven points with 1:45 left. If an onside kick had not been overturned, Oklahoma would have had an opportunity to tie the game at 48-all.

Instead, the Sooners’ dreams of an undefeated season came to an end.

Hubert said it was a lesson in humility. Oklahoma, he believed, didn’t think Saturday would “be a close game at all.”

It calls to mind a proverb from the Bible.

Pride cometh before a fall.

“That’s just something that you cannot do in college football,” Hubert said. “For example, last week Illinois beat Wisconsin when they were ranked in the top 10. So it could happen any time, any moment. You’ve just got to prepare the same every single week, no matter who you’re playing.”

'My prayers are out to him': Kansas State's thoughts with Eric Gallon II after gruesome injury

One of the few times a boisterous Bill Snyder Family Stadium fell quiet Saturday came at the 7:26 mark of the third quarter.