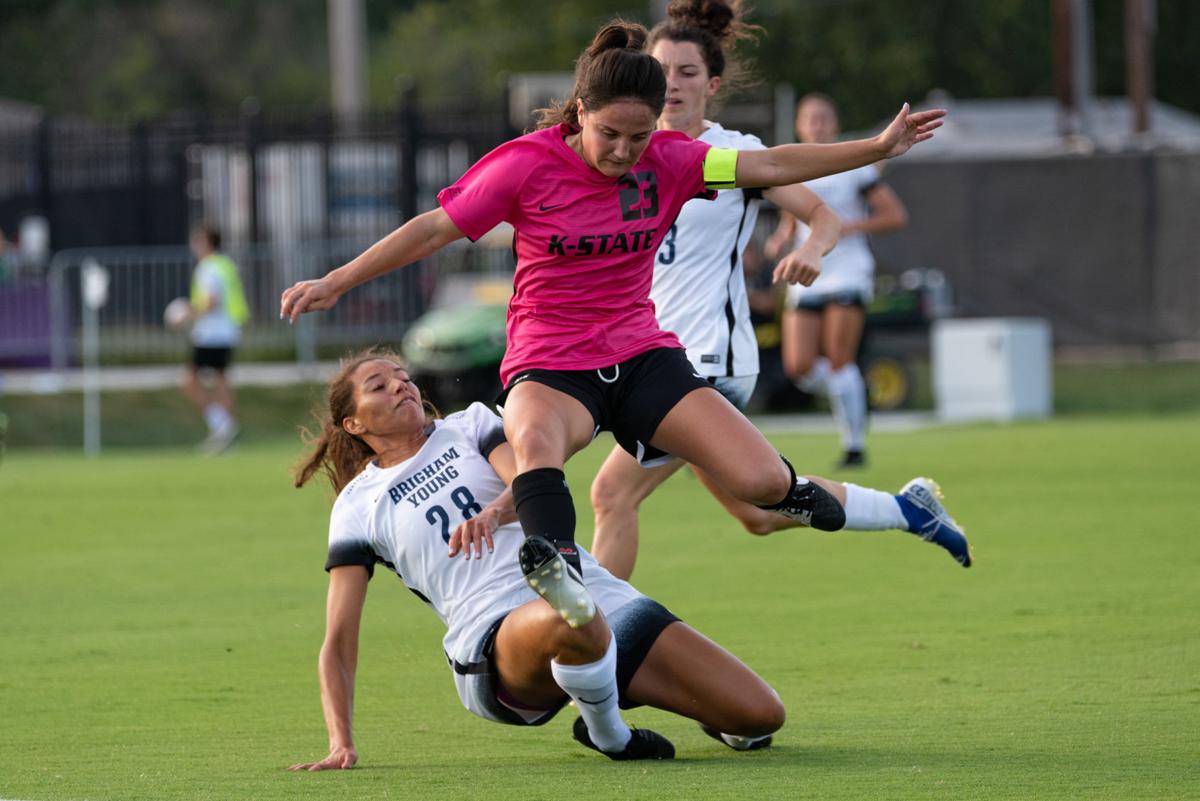 Kansas State’s Laramie Hall (23) jumps over a slide tackle from BYU’s Alyssa Jefferson (28) in a game at Buser Family Park on Sept. 21. Hall is one of five seniors honored by the team during the home finale against West Virginia on Sunday. 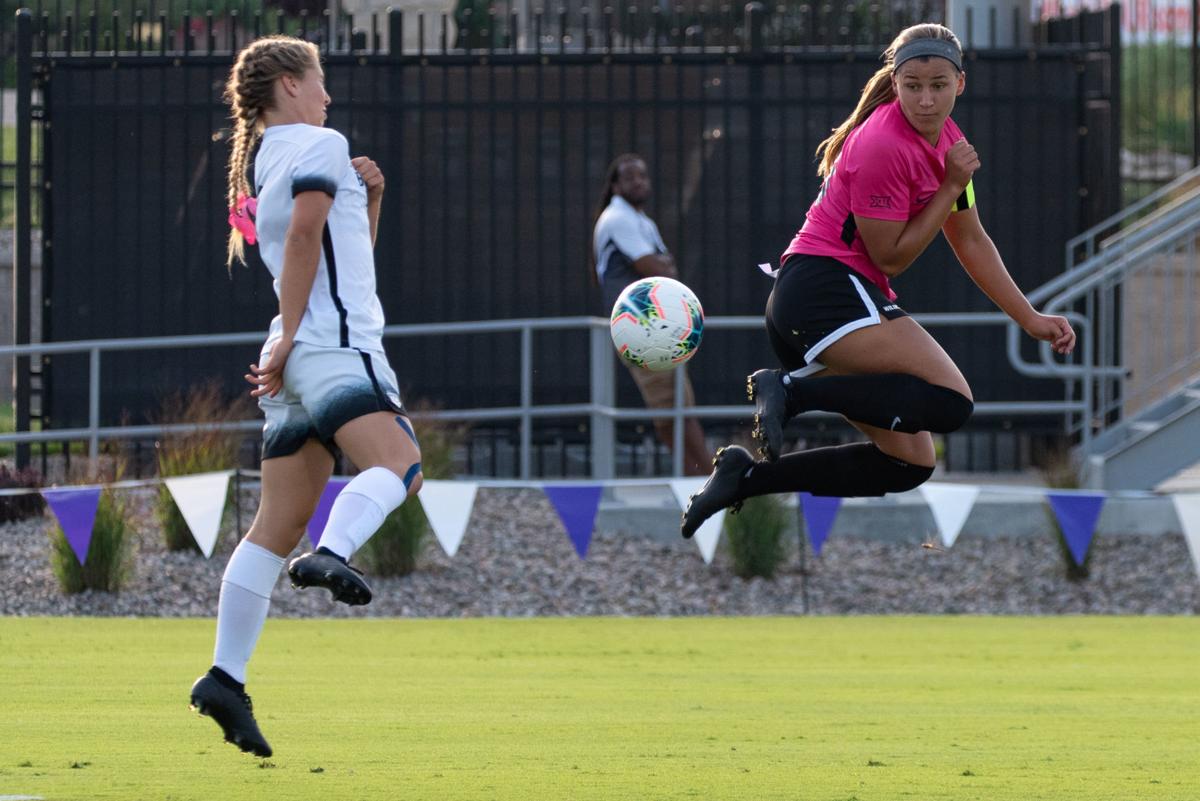 Kansas State’s Katie Cramer (right) jumps in the air and deflects the ball toward BYU’s SaraJayne Affleck (left) in a game at Buser Family Park on Sept. 21.

Kansas State’s Laramie Hall (23) jumps over a slide tackle from BYU’s Alyssa Jefferson (28) in a game at Buser Family Park on Sept. 21. Hall is one of five seniors honored by the team during the home finale against West Virginia on Sunday.

Kansas State’s Katie Cramer (right) jumps in the air and deflects the ball toward BYU’s SaraJayne Affleck (left) in a game at Buser Family Park on Sept. 21.

“Do you guys know what ‘clout’ is?” Hall asked two reporters.

When she was told no, the senior midfielder explained why she’ll cherish her K-State career, which began as a freshman in 2016, the program’s first season.

“People typically do it for the clout,” Hall said with a chuckle, “but we did not, because we didn’t have anything. We just grinded through it.”

Hall, one of the five members of the senior class who were freshmen in the program’s inaugural 2016 season, was right. At that point, K-State was a brand-new program. The roster included one senior, Abbey Fiser, who had transferred from Ball State.

The rest of the roster included 22 freshmen. By the time this season rolled around, only four had stayed: Hall, Katie Cramer, Aly Rocha and Ashley Zane. So did Grace Brennan, though she will use a medical redshirt to return next season.

Then, before the 2017 season, goalkeeper Emma Malsy transferred into the program.

That makes up the five seniors K-State honored Sunday afternoon.

“They laid the foundation for this program,” K-State coach Mike Dibbini said. “They did everything we needed them to do, in terms of allowing the younger players to understudy. They’ve earned everything they’ve done. Nothing was given. I couldn’t ask for a better group of seniors to come through.”

The book has yet to be written on the seniors’ careers, because K-State’s last regular-season game of the season comes Thursday at Texas Tech, but it’s worth reviewing the numbers before diving into the details.

With one game to play, this senior class has helped K-State to a 17-44-8 record. The Wildcats have registered two conference wins, over Kansas in 2017 and over Iowa State earlier this month, which sounds meager until you consider the circumstances.

It takes time to develop successful programs, Dibbini will tell you. He wasn’t making excuses Sunday afternoon when he compared the history of West Virginia to K-State’s.

That’s the silver lining those around K-State keep pointing to, and it makes sense. The Wildcats expect progress every year, not national contention, especially as the infancy stage continues.

Let’s start at the beginning, though. These seniors came to a program that — literally — didn’t exist before they arrived on campus. They had offers from other schools, but each chose K-State.

It begs the question: Why?

“I think it was just a cool idea that I could be the start of something,” Hall said, “and I could help build something from the ground up. So honestly, that was really appealing to me, so that’s why I chose it. And the coaching staff was awesome.”

Both Malsy and Zane, natives of California and Wichita, respectively, expressed similar sentiments. A new program awaited, and they wanted to be part of it. That’s part of the reason Zane turned down offers from other schools, and why Malsy transferred from Arizona State: for a chance at building something.

Ditto for Cramer, who added that the atmosphere around Manhattan made a difference. “‘Welcome to K-State. How can we help you?’” she recalls hearing on her recruiting visit.

For Rocha, things were more complicated. She went to high school in Santa Ana, California, a long ways from Manhattan — 1,508 miles, to be exact. Her connection to K-State came through assistant coach Gabe Romo, who previously coached high school soccer two hours away, in Lancaster.

When Romo finally convinced Rocha to visit K-State, Rocha realized she may have picked a bad time of year to do so.

“When he picked me up from the airport,” Rocha said, “he was like, ‘Is it a little cold here?’ It was definitely one of the most freezing places I had ever been in.”

The wins may not be there, but the results are.

This season, K-State played at the new Buser Family Park, which was built over the offseason. It’s complete with a new entrance, nearly 1,500 more seats and a revamped press box, which includes a television booth, a radio booth, operations booth, media seating and one suite for fans.

For the Wildcats, it provided a sense of validation. Before, they were playing at a facility with limited seating and a press box that wasn’t big enough for reporters. There wasn’t any sort of recognizable entrance, either.

All that has changed. Now that the facility is complete and K-State’s locker rooms were finished a few days before K-State hosted West Virginia, several players — seniors included — said they finally feel validated as a team. Like the program is here to stay.

“It means everything,” Hall said, “because it’s like all of this hard work is solidified into an object. Something that we can celebrate in the locker room and just be with each other. Everything that we strive to do — being together as a team, bonding and all those things — that can all happen in one building now.”

Ask around, though, and you’ll begin to catch onto a theme: Culture. Dibbini emphasizes it consistently. The seniors cite it when explaining their attraction to K-State.

The program is still establishing itself, but the Wildcats’ five inaugural seniors already accomplished have lots of the legwork.

“The proudest moment from my point of view,” Zane said, “was the culture that we’ve built. I have full confidence that, yeah, I’m leaving, but this program is going to continue to be successful. We’re going to start winning. Once we figure it out, it’s going to be awesome.”