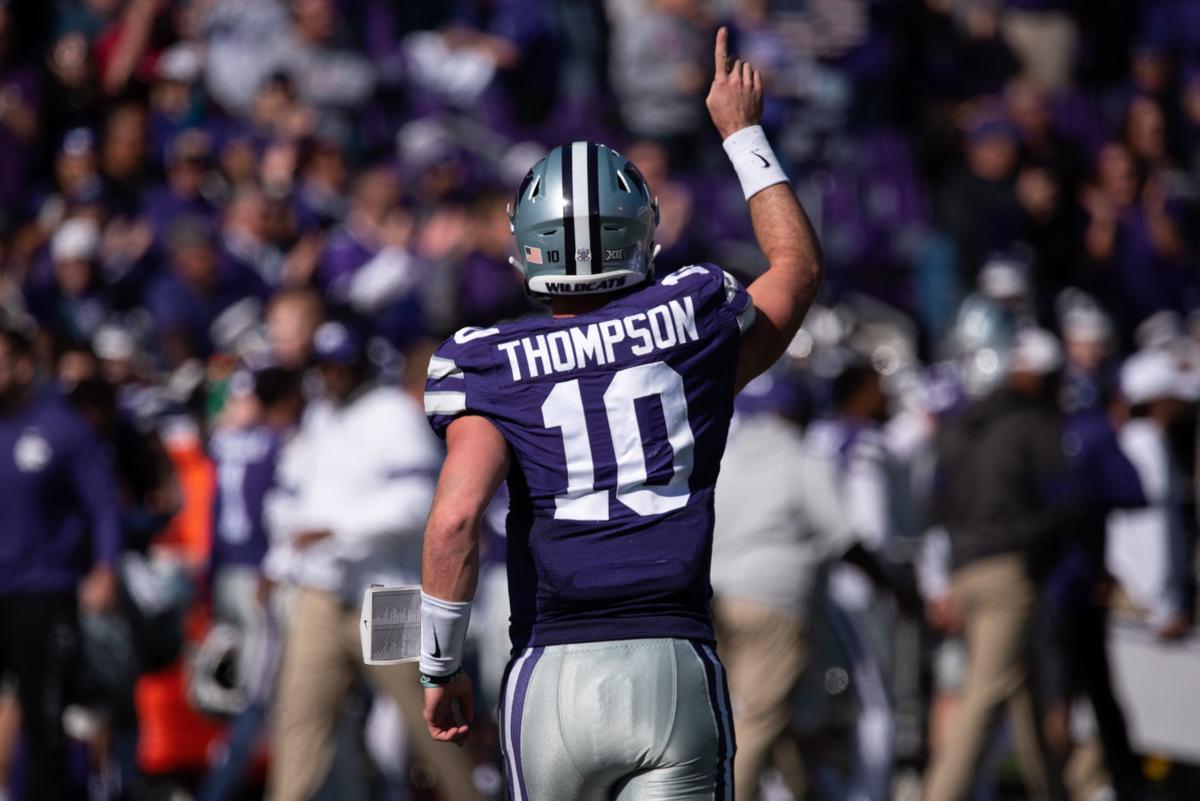 Kansas State quarterback Skylar Thompson (10) points to the sky after scoring a touchdown against Oklahoma at Bill Snyder Family Stadium on Oct. 26. Thompson ran for four touchdowns, helping the Wildcats top the No. 5 Sooners 48-41. It marked K-State’s first home victory over Oklahoma since 1996 and snapped a 22-game road winning for the Sooners. 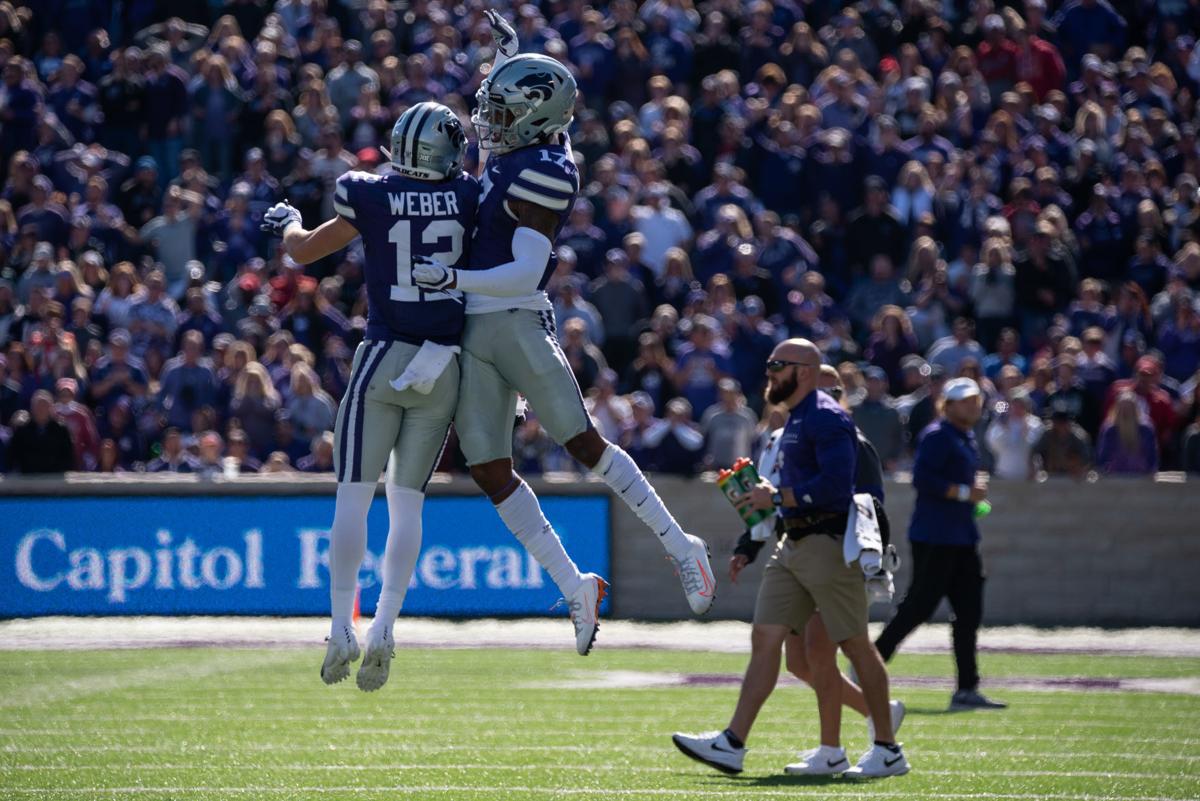 Landry Weber (12) and Jonathan Alexander (17) celebrate after K-State recovers a fumble on a kickoff.

Kansas State quarterback Skylar Thompson (10) points to the sky after scoring a touchdown against Oklahoma at Bill Snyder Family Stadium on Oct. 26. Thompson ran for four touchdowns, helping the Wildcats top the No. 5 Sooners 48-41. It marked K-State’s first home victory over Oklahoma since 1996 and snapped a 22-game road winning for the Sooners.

Landry Weber (12) and Jonathan Alexander (17) celebrate after K-State recovers a fumble on a kickoff.

Kansas State entered the Oct. 26 game against No. 5 Oklahoma with seemingly everything stacked against it. The Sooners were undefeated. They boasted the nation’s most explosive offense in terms of both points and yardage. They boasted a plethora of offensive weapons, from quarterback Jalen Hurts to wide receivers CeeDee Lamb and Charleston Rambo to running backs Kennedy Brooks and Trey Sermon.

The Sooners had one of the most improved defenses in the country under first-year coordinator Alex Grinch.

Oklahoma had the advantage of success away from home, both recent and past. The Sooners had won 22 true road games in a row, the second-longest streak by any team since World War II — trailing only their own 25-game run from 1953 to 1958 under legendary head coach Bud Wilkinson. And the Sooners had made Bill Snyder Family Stadium their home away from home the entire millennium, winning seven straight games in Manhattan.

All of those were merely numbers. Words. They didn’t matter.

Under first-year coach Chris Klieman, and an epic outing from quarterback Skylar Thompson on the ground, K-State upended Oklahoma, winning 48-41.

It’s a day that will forever be remembered for an oft-overlooked aspect of Thompson’s game: his legs. Though he routinely has stated how comfortable he feels running, it’s never been a major part of his game, preferring to win games with his arm. Against the Sooners, he had a ground-oriented approach, scoring four times — from 10, 14, 3 and 3 yards, respectively. It’s the first time a Wildcat had four rushing touchdowns in a game since last season, when All-Big 12 running back Alex Barnes accomplished the feat against Oklahoma State.

Thompson beating the Sooners with his feet provided a startling juxtaposition, as it was his counterpart in the contest, Hurts, who was averaging more than 100 yards per game on the ground. Against the Wildcats (5-2, 2-2 Big 12), Hurts finished with 96 yards and three scores.

The final of those came with 5:36 remaining: Hurts punched it in from the 1-yard line. Then he connected with Lamb on a successful two-point conversion, cutting K-State’s lead to 48-38.

Yet it was too little, too late for the Sooners (7-1, 4-1), who trailed at halftime for the first time this season.

Going into the break with a 24-23 lead came with an assist from an Oklahoma native. Wildcat cornerback AJ Parker, who hails from Bartlesville, Oklahoma, snuffed out a trick play by the Sooners. Oklahoma dialed up a pass by receiver Nick Basquine, which Parker picked off and returned 23 yards.

Three plays later, Thompson sprinted across the goal line for a 14-yard score. After a successful point-after by Blake Lynch, the Wildcats led 24-20. Oklahoma responded on the final possession of the first half with a 50-yard field goal — a career long — from redshirt freshman kicker Gabe Brkic. After halftime, the Wildcats stopped the Sooners on consecutive drives, getting three-and-outs from the high-octane unit both times. On the flip side, K-State’s offense soared. The Wildcats outscored the 17-0 in the third stanza to take a 41-23 edge into the final period. What made the third-quarter shutout all the more impressive: It marked the first quarter this season the Sooners didn’t manage a single point; they had scored in all 30 quarters (seven games, plus the first half against the Wildcats) in 2019.

That 15-minute surge immediately following halftime gave K-State enough breathing room to survive Oklahoma’s fourth-quarter onslaught, which included drama down to the final minutes. The Sooners successfully recovered an onside kick with less than two minutes to play — at least initially. Upon review, officials ruled that the Sooners had illegally touched it before the ball went 10 yards, giving possession to the Wildcats.

Thompson knelt on it twice.

Once the clock struck zero, Klieman had his signature victory just seven games into his tenure. It also was a feather in the cap for Thompson’s K-State legacy.

At long last, the Wildcats tasted victory over the Sooners in front of their home fans, who savored every moment of the stunning upset storming the field as the band struck up the alma mater.

'My prayers are out to him': Kansas State's thoughts with Eric Gallon II after gruesome injury

One of the few times a boisterous Bill Snyder Family Stadium fell quiet Saturday came at the 7:26 mark of the third quarter.