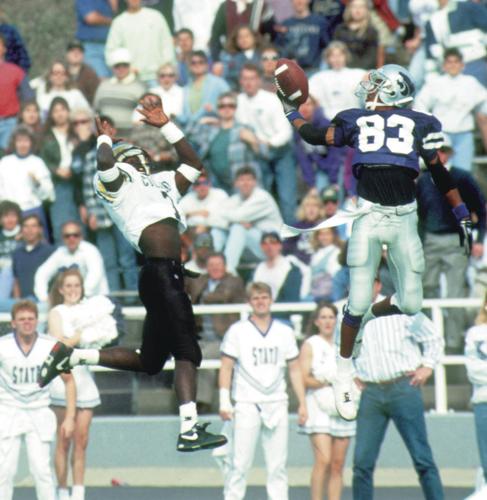 Former Kansas State star wide receiver Kevin Lockett makes an eye-popping catch in a game versus Colorado during the 1993 season. Lockett is one of five names that should be considered for the next K-State football Ring of Honor class. 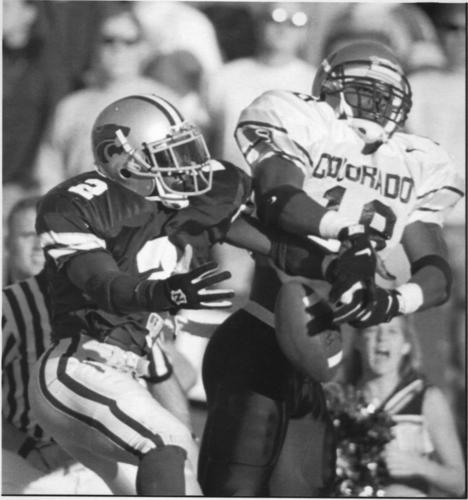 Former Kansas State cornerback Chris Canty, left, breaks up a Colorado pass in a game during the 1995 season. Canty was a two-time consensus All-American and holds the school record for interceptions in a season.

Former Kansas State star wide receiver Kevin Lockett makes an eye-popping catch in a game versus Colorado during the 1993 season. Lockett is one of five names that should be considered for the next K-State football Ring of Honor class.

Former Kansas State cornerback Chris Canty, left, breaks up a Colorado pass in a game during the 1995 season. Canty was a two-time consensus All-American and holds the school record for interceptions in a season.

With the 2022 class chosen and finalized, one can look forward to what star Wildcats could populate the next class. Here are five names, some well-known and others not as much, that should be considered for the next Ring of Honor class selection:

A team captain for the 1996 season, Lockett owned the school record for career receptions (217) and receiving yards (3,032) until his son, Tyler, passed him by roughly 20 years later.

Lockett caught pass in 44 consecutive games, which is a school record. He was also top-5 in both season and career receptions per game.

Lockett has the fourth-most career 100-yard receiving games with nine along with Michael Smith.

Lockett led the Wildcats in receiving yards in all four seasons at K-State, and also led the team in receptions in three of the four seasons he played in a Wildcat uniform.

Lockett was named a Co-Offensive MVP during the 1997 Cotton Bowl after reeling in seven catches for 135 yards and a touchdown in the Wildcats’ 19-15 loss to BYU.

He twice earned third team all-America honors in 1995 and 1996. Lockett was a Biletnikoff Award candidate, given to the nation’s top wide receiver, in 1994 and 1995 before being named as one of 10 semifinalists in 1996.

Lockett participated in the Senior Bowl and the East-West Shrine Bowl before being drafted in the second round of the 1997 draft by the Kansas City Chiefs. Lockett played three years with the Chiefs, two years in Washington and one season at Jacksonville before ending his football career in 2003 with one season with the New York Jets.

A lot of the pre-Bill Snyder-era players that are worthy of the Ring of Honor have already been selected because, quite frankly, there really weren’t a whole of players of that caliber to pick from.

After spending a year at Cowley Community College, Singletary came to K-State and immediately was named Big 8 Newcomer of the Year in 1981. He was an All-Big 12 defensive end during the 1981 and 82 season and was an All-Big 8 down lineman in 1983.

Singletary still is the all-time school record holder in tackles for loss in a season (28) and in a career (60). Half tackles for loss were not counted until 2000 when the NCAA made tackles for loss an official statistical category, which makes those two records even more impressive.

He was part of the 1982 Wildcat football team that played in the first bowl game in school history (the Independence Bowl versus Wisconsin).

After graduation, he participated in the Hula and the Blue-Grey All-Star game before being drafted in the 1984 USFL draft by the Michigan Panthers where he played for two seasons.

Canty snagged 14 career total interceptions which is second most in school history. He owns the school record for picks in a season (eight, which also led the co-led the nation in 1995). He is also one of six K-State players to grab three or more interceptions in a single game (three versus Akron in 1995).

Canty is also one of six K-State players to have multiple interception returns for a touchdown in a season, both of which came during the 1995 season.

Canty holds the overall record for passes defended in a season (25) and a career (56).

Canty played two seasons in New England followed by two seasons in Seattle before finishing out his NFL career in New Orleans. He also played four years in the Arena League.

During the 20-year history of the Ring of Honor, nearly every single position group has been recognized. A notable one that hasn’t made the cut though is offensive line.

A Super Bowl-winning center, Leckey was a two-time All-American for the Wildcats during the 2002 and 2003 seasons. During his time at K-State, he never allowed a sack any of his 41 consecutive starts.

Leckey was part of the 2003 Big 12 Championship team that toppled No. 1 Oklahoma 35-7 in the title game. He anchored an offensive line that allowed current Ring of Honor inductees Ell Roberson and Darren Sproles to have the success that they did.

He was drafted in the sixth round by Arizona in 2004 where he played for three seasons before spending two years with St. Louis. He ended his football career in New Orleans in 2010.

At the very latest, 2024 will be Vaughn’s final season at K-State (even though it’s probably a safe bet that he will decide to declare for the NFL Draft after this season or next) which means that, even if Vaughn plays out his full college eligibility, he would still barely meet the requirement of being five years out of school before the selection for the next class.

Whether its the next Ring of Honor class or the one after it, Vaughn is a no-brainer to be the first player from the Chris Klieman-era to earn the honor. In his relatively short time in a Wildcat uniform, he has already shown that he belongs among the elite class of Wildcat football players.

In just two seasons, Vaughn has earned Consensus All-American honors, just the 11th K-State player in history to do so, and was named the Big 12 Offensive Player of the Year by Pro Football Focus last season.

He currently ranks third in Big 12 history in scrimmage (rushing and receiving) yards per touch (6.8), only behind Oklahoma’s Kennedy Brooks and Texas’ Vince Young.

He ranks seventh in Big 12 history with 128.2 scrimmage yards per game. He is tied for eighth all-time among running backs with six receiving touchdowns and he leads all Big 12 running backs in catches and receiving yards over the last two seasons combined.

Vaughn ranks second in K-State history career rushing yards per attempt (5.72) and is currently tied for second in 100-yard rushing games (12), including a current streak of six-straight games (the second longest streak in school history).

Vaughn is the only player in school history to reach 3,000 all-purpose yards prior to the end of his sophomore year.

Heading into his third season, Vaughn is currently tied for fifth in school history in total touchdowns (31) and is just 26 points shy of entering the top 10.