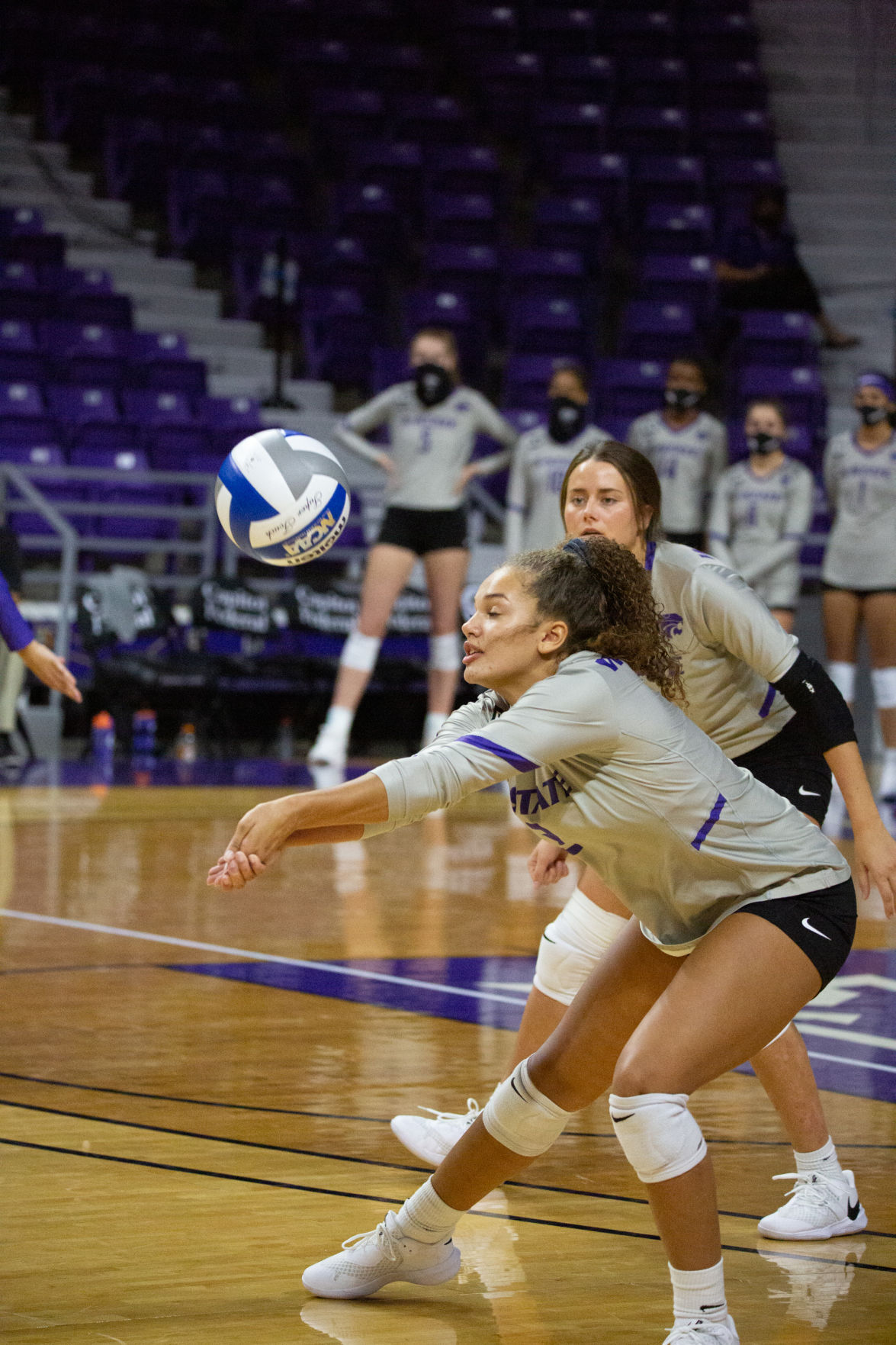 Carter sets up a ball during the team’s match against Iowa State at Bramlage Coliseum on Sept. 26. 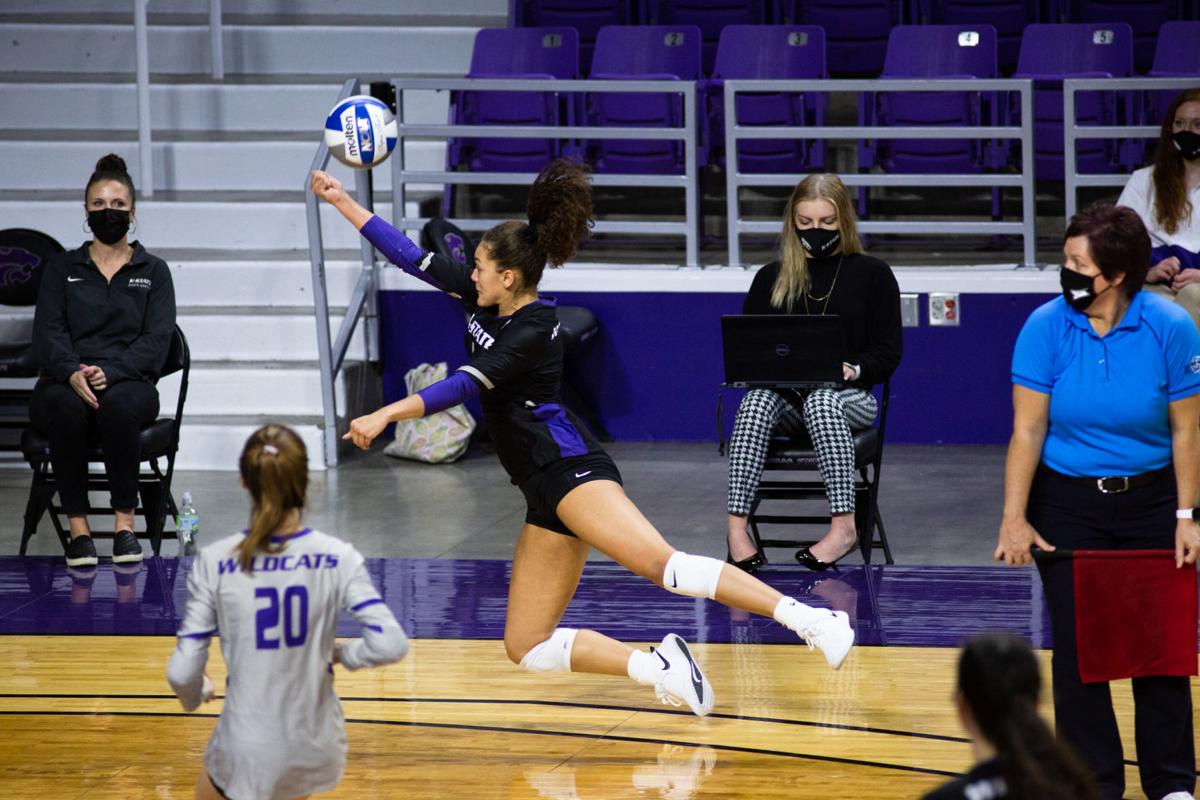 Kansas State’s Aliyah Carter (2) soars to keep a ball in play during the team’s match against Creighton at Bramlage Coliseum on March 20. Carter was named Big-12 Freshman of the Year on Thursday.

Carter sets up a ball during the team’s match against Iowa State at Bramlage Coliseum on Sept. 26.

Kansas State’s Aliyah Carter (2) soars to keep a ball in play during the team’s match against Creighton at Bramlage Coliseum on March 20. Carter was named Big-12 Freshman of the Year on Thursday.

Coming into the 2020 season, the Kansas State volleyball team was young and inexperienced with 11 underclassman, featuring five freshman and six sophomores. Shelby Martin, a transfer from East Carolina, was the team’s only senior.

K-State needed a younger player to step up and have a big season.

Aliyah Carter, a 5-foot-9 outside hitter, jumped all over the opportunity. She was a dominant force for the Wildcats all season. And on Thursday, she was named the Big 12’s freshman of the year.

“People had to know that some freshman were going to play,” Carter said. “Some people were going to have a bigger impact than others, because we are a young team. I do not think people were expecting it to be me. Especially our competitors, looking at me (and) seeing how short I am. And they have not really seen me play. So I don’t really think anybody was expecting this much to come out of it.”

In K-State’s first four matches this fall, Carter recorded double-digit tallies in kills, and then recorded 26 kills against Texas. Carter was named the conference’s rookie of the week six times, and earned the offensive player of the week honor once.

Her six weekly awards this season are a school record since K-State joined the Big 12.

To Carter, awards simply show that she plays her role to the best of her ability.

“I don’t think I was expecting (the awards),” Carter said. “I would say I was kind of kind of just playing volleyball. Before the season, I really did not know the awards were going on. I just knew that I wanted to play volleyball, and I wanted to help this team get to the (NCAA) tournament. With all the awards coming out, I was kind of just like, ‘Oh, that is cool’. I try not to reminisce on it. I just acknowledge it and then keep moving forward.”

To begin the spring portion of the season in the loss to Texas State, Carter had her season high in kills with 27 kills, setting a K-State freshman record in that category.

K-State responded after the loss with three straight wins, and Carter’s became an even bigger part of the team’s success.

The Wildcats upset then-No. 24 Creighton on March 20, and Carter was at the heart of the win with 26 kills.

When she heard the news, Carter said it was “the most emotion” she’d ever felt as an athlete.

“I am being acknowledged for just what I do,” she said. “I love to play volleyball. I love trying my best. It is fun to see I am rookie of the week. It makes me feel like I am up there with the best of the best.”

“I think everybody kind of knows that I really thrive off big games,” Carter said. “I love playing in the big games. I think that emotion shows when I get 26 kills or 27 kills, because I love the feeling I get, (like), ‘When we win this game. It is going to be really big.’ I love that feeling.”

Carter’s rock-solid consistency quickly earned her the respect of her teammates.

“She has proven herself over and over again,” Martin said. “She is definitely playing above her level. She is improving herself to be more than just a freshman hitter. She is definitely making a name for herself on this team. She is just super consistent and super reliable. She is always a good person to go to in a pinch.”

Martin said Carter’s influence only will continue to grow within K-State’s program in the years to come.

“She will definitely be more of a performance leader,” Martin said. “She can really get the team going. She provides a spark for the team. She is consistent all the way around. She is definitely somebody to rely on from that aspect.”

While Carter’s kill totals garner the lion’s share of the attention, she’s done far more than that in Year 1 as a collegian.

“I think (kills) are just a way to help out the team,” Carter said. “Recently I just started playing mix rotations, trying to get better with my serves so I can help more in that aspect. A lot of my help comes from my emotional state while playing. I like to uplift the team and I like to encourage my teammates. I think that the kills do have a lot to do with it, but I do not think it is a big part of it.”

Head coach Suzie Fritz has seen Carter grow in her freshman season — and views her as a special player with limitless potential.

“I think she has earned a tremendous amount of respect to this point in her young career,” Fritz said.

“The thing to me that is special about her that I believe her team likely recognizes is what you get every day — not what you get in the match; what you see in the match is what you see every day. For a young player who is just starting to work at this level, that is what is special about her: You know exactly what you are going to get from her every single day. She brings it every day. She has high expectations and an exceptional work ethic on the court and in the weight room.”

The freshman outside hitter plans has big plans for the future.

Namely, she wants to help the Wildcats return to the NCAA Tournament.

And she has personal objectives driving her, too.

“I hope I can do bigger things than what I am doing now,” Carter said. “The goal is always to push forward and to go up. I am hoping for big things not only out of myself, but for this team as well. For myself, ever since I started playing volleyball (I wanted) to be national player of the year. If I do not get it, then I do not get it. Within the next four years of me playing, I hope that my name will be around that title.”