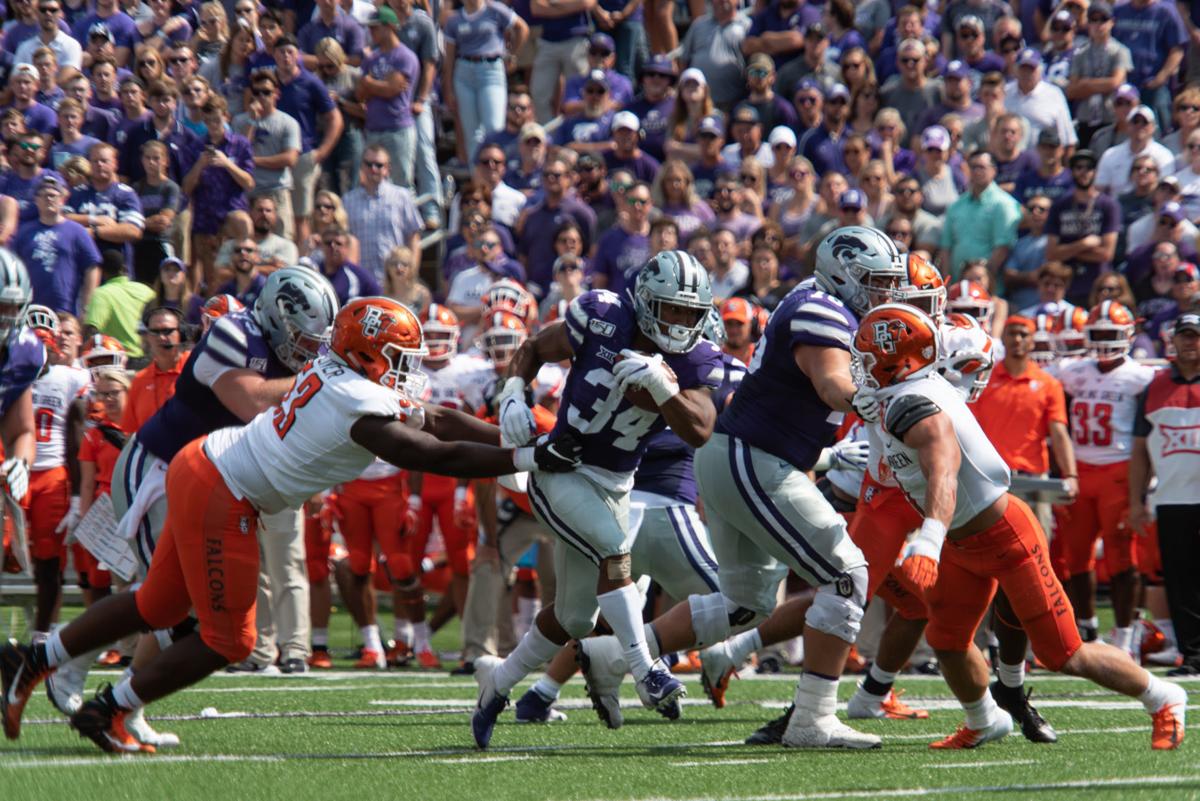 Kansas State running back James Gilbert (34) runs for a touchdown in the first quarter against Bowling Green on Saturday. 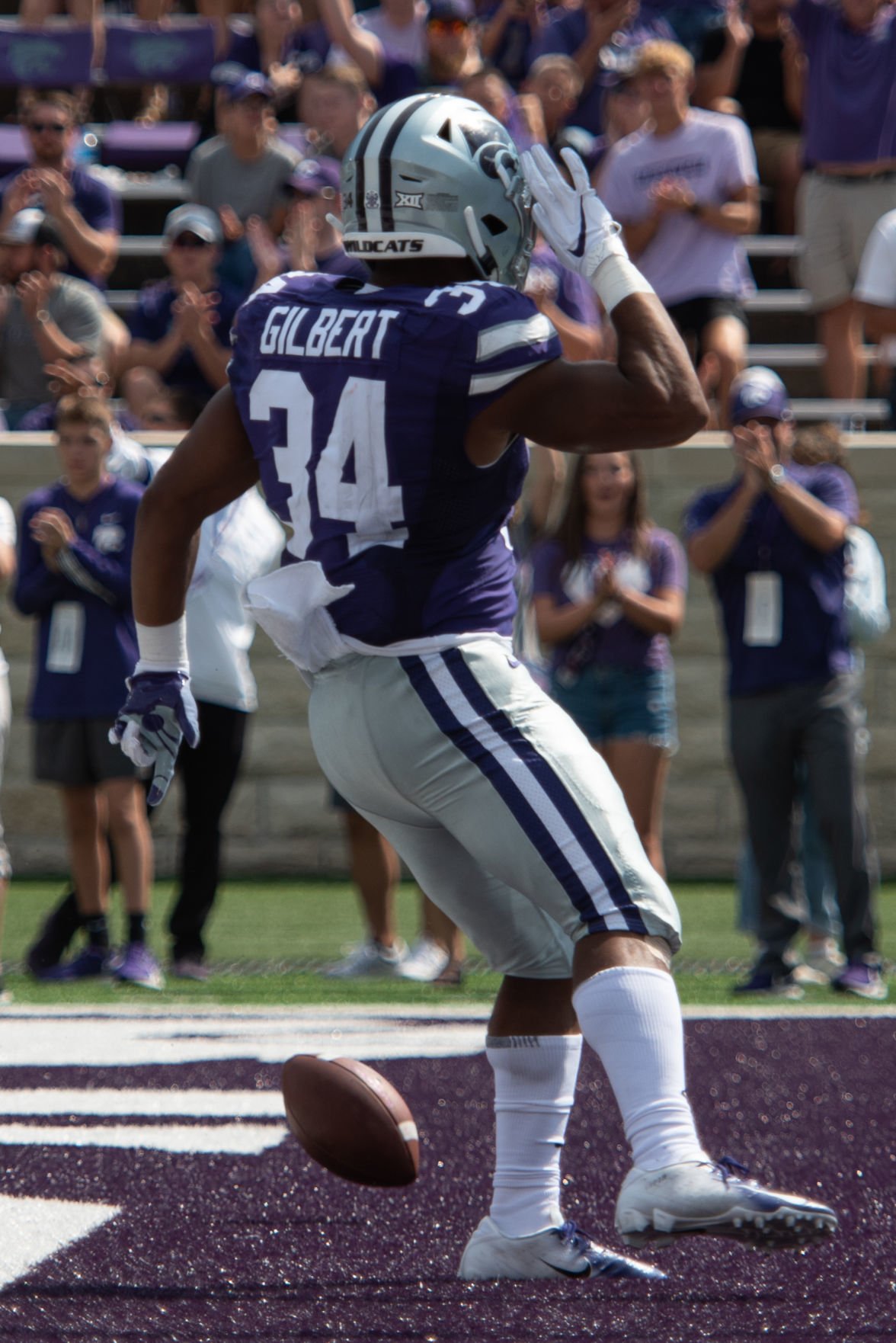 Kansas State running back James Gilbert (34) celebrates after running for a touchdown in the first quarter against Bowling Green on Saturday.

Kansas State running back James Gilbert (34) runs for a touchdown in the first quarter against Bowling Green on Saturday.

Kansas State running back James Gilbert (34) celebrates after running for a touchdown in the first quarter against Bowling Green on Saturday.

James Gilbert’s intuition told him he’s going to be made fun of all week at practice. Considering Kansas State defeated Bowling Green 52-0 Saturday afternoon at Bill Snyder Family Stadium, and Gilbert rushed for 103 yards and two touchdowns for the Wildcats on just eight carries, it likely will be in good fun.

But perhaps the jokes could become a weekly tradition among a running back group that’s dominated the first two weeks of the season. The play Gilbert, a senior, anticipates he could receive ribbing for actually was one of the most impressive of the game. He broke a tackle during the second quarter on a spin move to the outside and galloped down the field for 51 yards before getting tracked down and pushed out of bounds just 5 yards away from the end zone.

“Last week with Harry Trotter, he got tripped up by the turf, so everybody is going to clown me this week because I got hawked down by that guy,” Gilbert said. “But oh well, that’s not me. I’m not a ‘home-run guy,’ but (running backs) Coach (Brian Anderson) kept me in and let me score the next play. But they are going to make jokes about me all week.”

Gilbert shined, but it was a group effort among the backs to put together 333 yards and five touchdowns, with different players receiving at least one carry. The team is running the ball by committee, because of the different skill sets each have. But it’s been effective through the first two games.

And it’s not just the stat-padding backs who are impressing.

“When you are playing behind that offensive line you can look pretty good, too,” head coach Chris Klieman said. “We’ve got a great offensive line, so let’s give the credit to those guys. But I’m real pleased with our backs. I thought James Gilbert made a big time run today, bouncing outside and getting banged up and making a big play. I thought Jordon Brown had a big run. Harry is running really hard. We wanted to play the younger guys. We didn’t play Tyler Burns today, and it had nothing to do with Tyler. We just wanted to see those younger guys. I feel comfortable and we are going to need all of them moving forward.”

Brown broke free for a 50-yard run himself in the first quarter. His was less about power and more about hitting the gap provided by his line — and having the speed to outrun would-be tacklers. Brown, a graduate transfer, was once part of a North Carolina squad that also ran by committee.

“It makes it easier to be with a group of guys where we are all going to push each other,” Brown said. “Everybody is going to make a play when they come into the game and there won’t be any drop off.”

There are benefits to the system if the players are unselfish. For one, players can have more energy. While a running back likely won’t turn down carry after carry, having three to four backs enter the second half with fresh legs against Big 12 teams in games down the road won’t hurt.

It also keeps defenses on their heels. Just when they make substitutions or play calls to account for a back who runs it up the middle with Gilbert-like strength, the Wildcats can send in a speedster like Brown.

Having freshman who deliver is valuable, too, considering preparing for five or six backs only adds to the difficulty of bracing for three or four upperclassmen ballcarriers.

This is a shift for the Wildcats, too.

“Last year when we would just ran Alex Barnes, you knew after so many games the way Alex would play,” second-string quarterback John Holcombe II said. “You knew you could just stack the box or maybe need to cover the outside.

So you just can’t pin a running back every game. You have to be prepared for every running back and the different skills they bring.”

As starting quarterback Skylar Thompson continues to get more familiar with this group, he’s going to have more ability to audible and make quick decisions with them, too. Thompson already made one such alteration when he changed the play to get Gilbert one of his touchdowns Saturday.

“Skylar made a check, we ran the right play and scored a touchdown,” Gilbert said. “So that’s two times in a row.”

Gilbert finished the drive there, but not quitting on individual plays has been a point of emphasis for all the backs in practice, Gilbert said. That’s the motivation and repetition he’s worked on that translated to the spin move that led to the 51-yard burst.

The motivation also stems from the amount of carries each player will receive. While they all know they will get to run the football, it’s still on their mind that executing their plays when they get them will be beneficial to everyone involved.

“We don’t know how many carries we are going to get or how many touches we are going to get, but when we get the ball in our hands we have to make the play and do what we do because that’s our turn to make a play for the team,” Gilbert said. “I’ve been around a lot talented running backs but I feel like this group is really special. We’ve got veteran guys and young guys. Everybody can get the job done.”