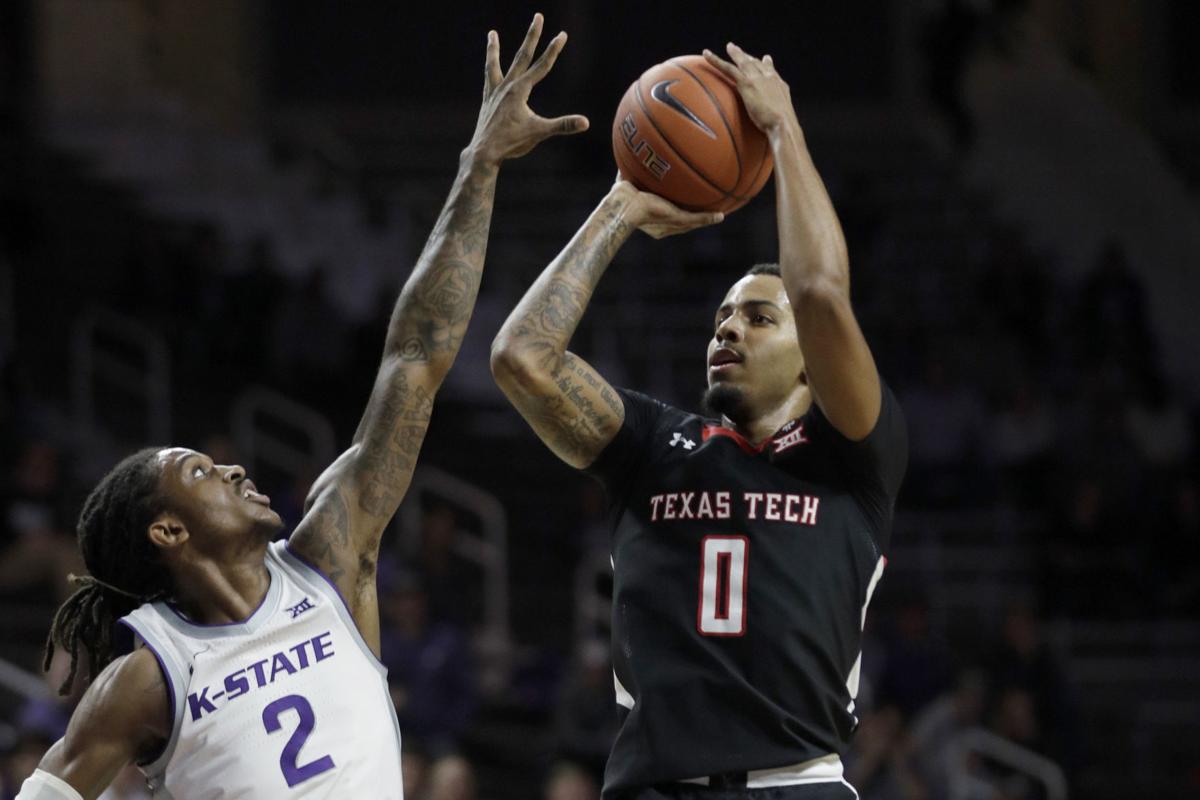 Texas Tech guard Kyler Edwards (0) shoots over Kansas State guard Cartier Diarra (2) during the first half of Tuesday’s game at Bramlage Coliseum. Edwards scored a game-high 24 points to lead the No. 23 Red Raiders to a 77-63 win. 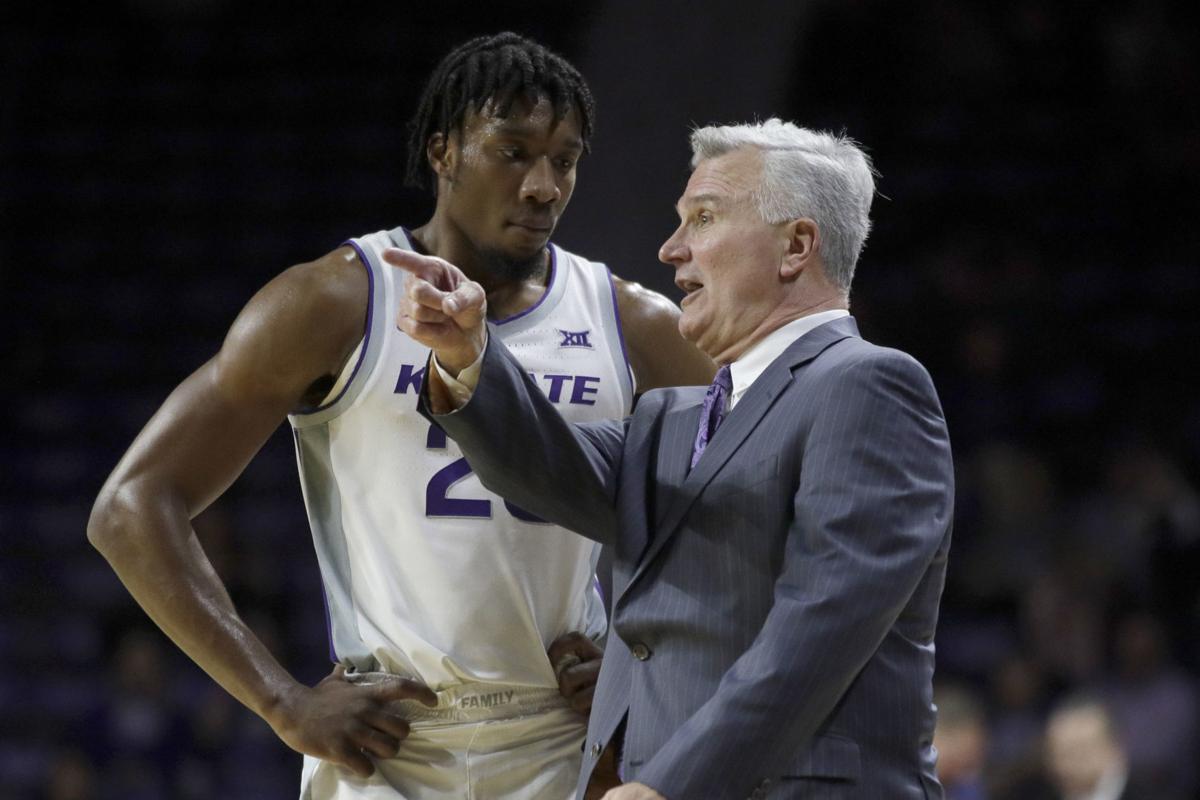 Kansas State head coach Bruce Weber talks with forward Xavier Sneed (20) during the first half Tuesday's game against Texas Tech at Bramlage Coliseum. The Wildcats lost 77-63 to fall to 0-4 in Big 12 play. K-State hosts No. 12 West Virginia at 1 p.m. Saturday.

Texas Tech guard Kyler Edwards (0) shoots over Kansas State guard Cartier Diarra (2) during the first half of Tuesday’s game at Bramlage Coliseum. Edwards scored a game-high 24 points to lead the No. 23 Red Raiders to a 77-63 win.

Kansas State head coach Bruce Weber talks with forward Xavier Sneed (20) during the first half Tuesday's game against Texas Tech at Bramlage Coliseum. The Wildcats lost 77-63 to fall to 0-4 in Big 12 play. K-State hosts No. 12 West Virginia at 1 p.m. Saturday.

Cartier Diarra drove to the basket, hanging in the air. Two points.

As has become commonplace this season, the Wildcats’ opponents made more plays down the stretch, leading to a 77-63 loss to the Red Raiders.

That K-State still lost by 14 — after pushing ahead on Diarra’s layup and having the game all-square, 48 apiece, with 11:42 to go — left Bruce Weber shaking his head. And comparing his team’s struggles to the world of animation.

“It’s the dike, like the little kid in the cartoons. You keep putting something in there,” Weber said after his team’s fourth loss in as many games. “One day it’s free throws, the next day, you can’t make 3s. Then it’s turnovers. It just seems like it’s different every game. I don’t know.”

With the game knotted at 48, the Red Raiders (11-5, 2-2) made a decisive run, outscoring the Wildcats 13-2 in the next four and a half minutes, staking themselves out to a 61-50 lead. The edge was more than enough to help them breathe easy the rest of the way.

That K-State ever tied, or took the lead, Tuesday might not have been expected based off its less-than-stellar start to the contest.

K-State allowed Kyler Edwards — who scored a game- and career-high 24 points — to knock down a 3-pointer to start off Tuesday’s scoring. Two minutes later, the Wildcats fouled Edwards on another 3-point attempt. He sank all three to push the lead to 6-0. Then Davide Moretti nailed a triple of his own -- and was fouled in the process. Another made free throw for the Red Raiders.

Just like that, Texas Tech led 10-0 barely three and a half minutes into the game.

“They switched everything to start the game and it kind of got us stagnant,” Weber said. “Obviously, it was 10-0 or whatever it was that we spotted them. To our guys’ credit, they did not stop battling. We came back three different times from big deficits and you tie the game up.”

After falling behind 10-0, the Wildcats responded with a 7-0 run of their own to close within three. But that’s the closest they got the remainder of the half.

Texas Tech led by as many as 15 points (32-17 at the 4:23 mark of the half) before K-State rallied to get back within single digits by the break.

At halftime, the Wildcats trailed 37-30, in large part thanks to the efforts of Diarra, who scored 10 points in the opening 20 minutes.

The first half, however, was less defined by the play of either team than it was anger at the officiating — from K-State, Texas Tech and the purple-clad fans in attendance.

The Red Raiders were the first victim of a quick whistle: Officials assessed Edwards a technical after he yelled out “And one!” following a layup at the 6:51 mark. Less than a minute later, Weber picked up a technical, coming well out of the coach’s box to voice his displeasure on an offensive called on freshman forward Antonio Gordon. Moretti made the two subsequent free throws to extend Texas Tech’s lead to 27-15.

Weber explained that his anger wasn’t even directed at the foul called on Gordon; instead, it was one he felt the officials missed.

“I was mad because Xavier (Sneed) got knocked down,” Weber said. “It never should have come to a charge/block call, because Xavier went for the ball and they knocked him down. He lost balance. That’s all I was mad about. Make that call and then the other one doesn’t even matter and we go to the free throw line. I guess he just thought I kept griping. That one official was in the huddle with me, talking to me. I was just talking to him. So it is what it is. Maybe it got us fired up. We did come back after that, so maybe I need to get more of them.”

Weber felt two areas made the difference — both which tilted in the Red Raiders’ favor: second-chance points (16-6) and points off turnovers (30-20).

Diarra had 19 points to pace the Wildcats, going 7 of 11 from the field. Sneed (14 points) and freshman forward Montavious Murphy (11, finishing 9-for-9 from the free throw line).

Yet Weber felt the good Diarra did was offset by miscues — notably, the 10 turnovers he combined to commit with fellow ballhandler David Sloan.

For Weber, Tuesday represented more of the same. In a bad way.

The Wildcats, time and again, put themselves in position to win.

Then they don’t make the plays needed to put them over the top.

Mike McGuirl had started each of the first 15 games of the season for Kansas State. But he didn’t even take the floor in Tuesday’s 77-63 loss …