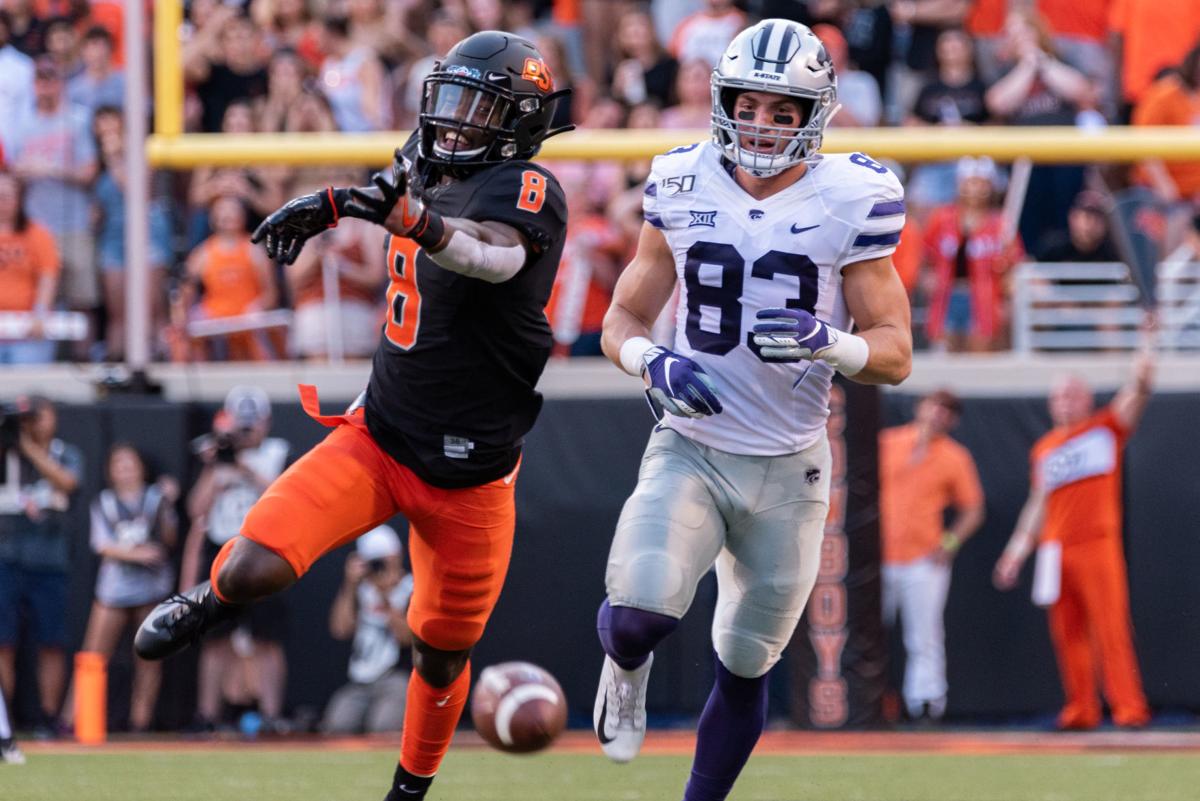 Kansas State quarterback Skylar Thompson’s pass falls out of reach for senior receiver Dalton Schoen (83), with defense from Oklahoma State’s Rodarius Williams (8). The No. 24 Wildcats lost to the Cowboys 26-13 at Boone Pickens Stadium on Sept. 28. 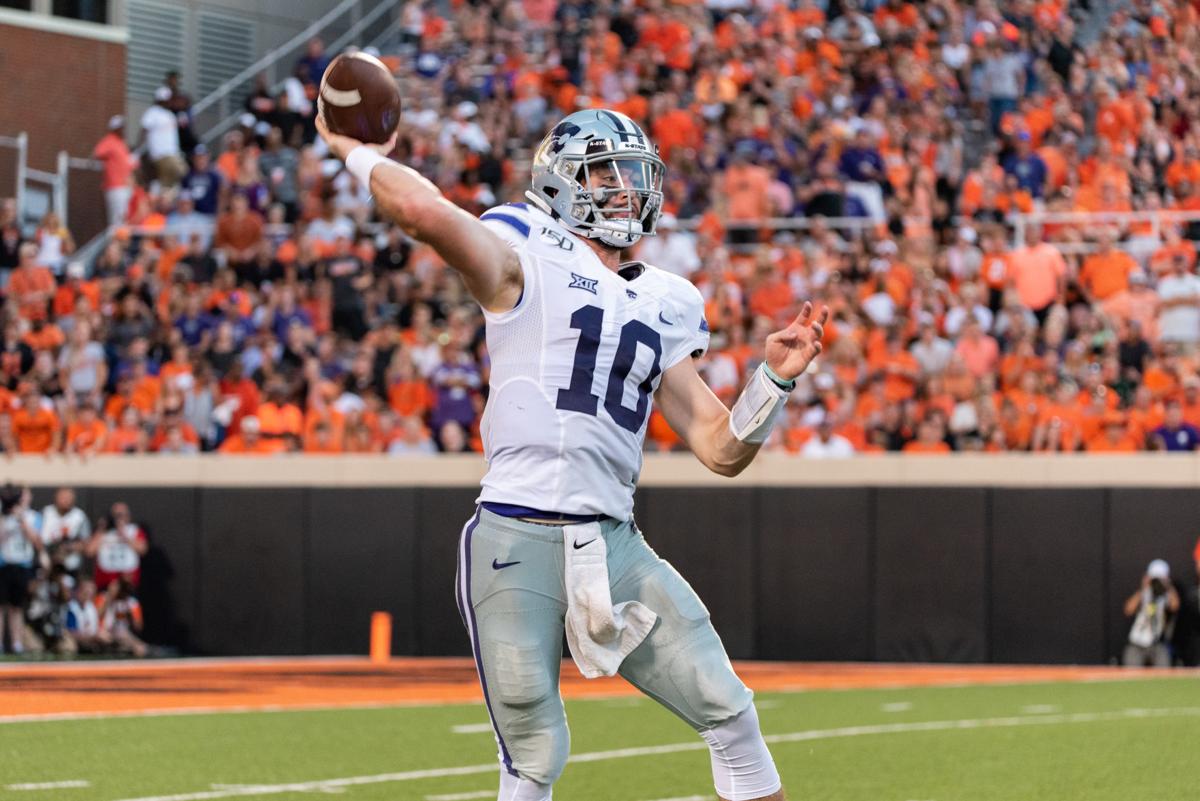 Kansas State quarterback Skylar Thompson (10) throws the last pass during the second quarter before the game was delayed because of lightning seen near Boone Pickens Stadium. K-State lost to Oklahoma State 26-13. 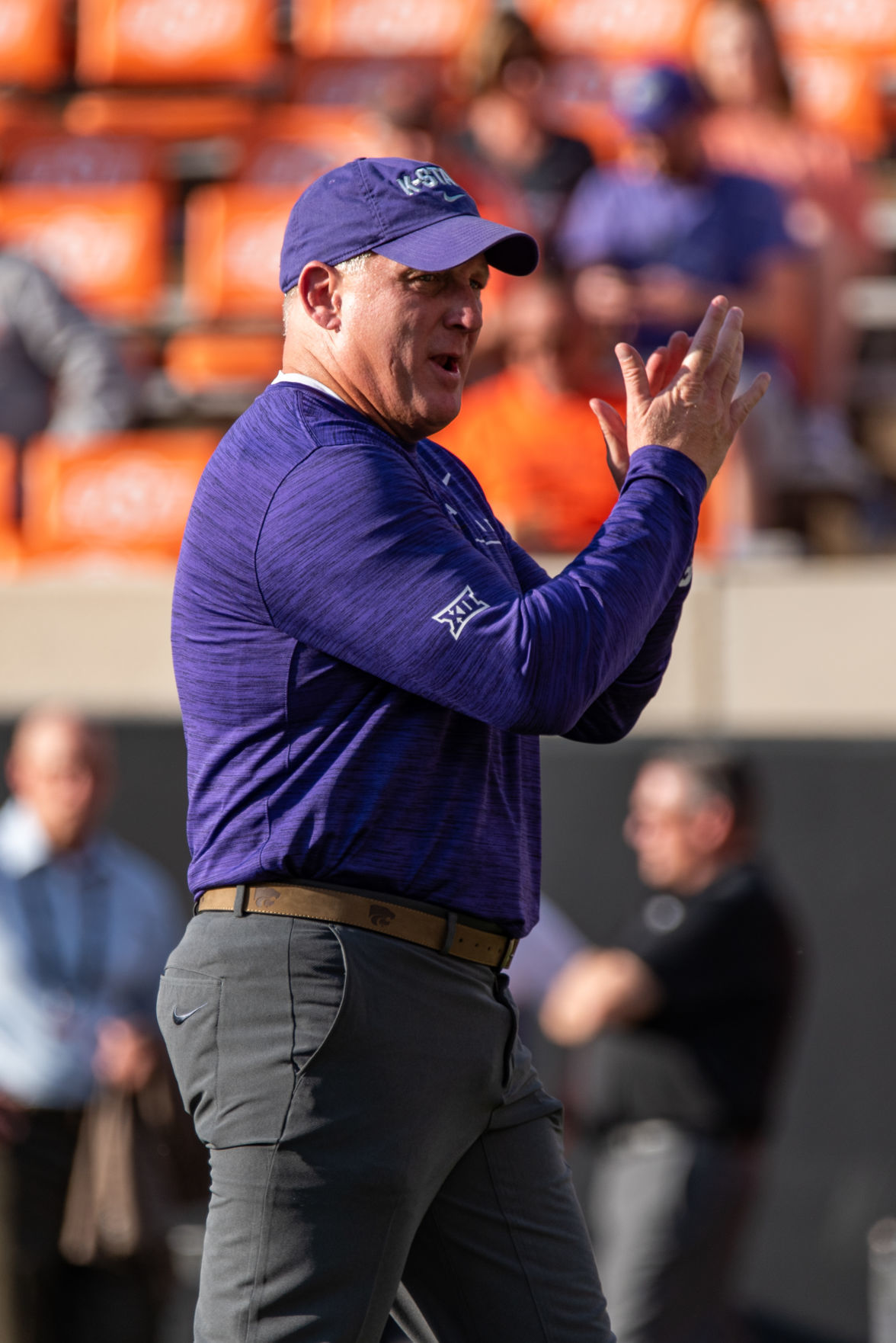 Kansas State quarterback Skylar Thompson’s pass falls out of reach for senior receiver Dalton Schoen (83), with defense from Oklahoma State’s Rodarius Williams (8). The No. 24 Wildcats lost to the Cowboys 26-13 at Boone Pickens Stadium on Sept. 28.

Kansas State quarterback Skylar Thompson (10) throws the last pass during the second quarter before the game was delayed because of lightning seen near Boone Pickens Stadium. K-State lost to Oklahoma State 26-13.

STILLWATER, Okla. — Kansas State scored points and picked up yards by the bushel in its first three games. Both were in short supply Sept. 28.

The No. 24 Wildcats, in their first Big 12 game and first time ranked under first-year head coach Chris Klieman, had no answers offensively against Oklahoma State. And versus the high-powered Cowboys’ offense, that spelled doom, with the Wildcats falling 26-13 at Boone Pickens Stadium.

Klieman was vying to become the first coach in school history to begin his career 4-0. And he was trying to extend a personal streak of 25 consecutive wins dating back to his tenure at North Dakota State.

“On offense, we just couldn’t get enough going,” Klieman said in his postgame press conference. “We couldn’t get into a good rhythm on first-and-10, and that’s a credit to them. We’ll get back to work Monday.”

It didn’t start out badly for K-State, which was coming off its first open date of the season. On the first play from scrimmage, Oklahoma State quarterback Spencer Sanders connected with his All-America wideout, Tylan Wallace, for 25 yards. But one play later, defensive end Wyatt Hubert — who sat out K-State’s win over Mississippi State on Sept. 14 with an undisclosed injury — dropped Sanders for an 8-yard loss. The Cowboys (4-1, 1-1) went on to punt.

K-State answered ... with a three-and-out of its own.

And while Oklahoma State’s offense eventually got on track in the first quarter, K-State’s never did.

The Wildcats finished with just 244 total yards. Of their 14 drives, they had six three-and-outs. They had a one-play possession (a kneel at the end of the first half) and a two-play possession (a lost fumble by running back James Gilbert). Only four drives went more than four plays; perhaps not surprisingly, three of those marked their three scoring drives, capped by a pair of field goals from kicker Blake Lynch and a 5-yard touchdown from running back James Gilbert in the fourth quarter.

But by the time Gilbert crossed the goal line with 7:14 remaining — set up by an interception by defensive back Darreyl Patterson, which he returned 26 yards before Wallace leveled him on the sideline — K-State needed far more. The touchdown and Lynch’s extra point cut K-State’s deficit to 23-13.

The Cowboys promptly responded with another field goal to seal the victory.

Outside of the first two drives, Oklahoma State didn’t have many issues moving the ball against the K-State defense.

On their third possession, the Cowboys edged ahead 3-0 on a 25-yard field goal from Matt Ammendola.

They were back on the board barely two minutes later; following Gilbert’s lost fumble, Sanders hooked up with Logan Carter — who plays the hybrid “Cowboy Back” spot in the Oklahoma State offense, a blend of the tight end and fullback positions — on a 3-yard score to push the lead to 10-0 at the 3:57 mark of the first quarter.

Ammendola knocked in another field goal in the second quarter to extend the advantage to 13-0. K-State’s defense finally stopped the bleeding ... thanks to Mother Nature.

A lightning delay paused the game for one hour, 12 minutes. Play resumed with just under nine minutes remaining in the half.

In the first play out of the delay, Thompson hit tight end Sammy Wheeler for a 39-yard gain. The drive ended with K-State’s first points of the day: a 46-yard field goal from Lynch.

“I don’t think the delay was any factor,” Klieman said. “If anything, it gave us a chance to reset on defense.”

The Cowboys went into the break ahead 16-3, and added to it when star running back Chuba Hubbard — who ran for a career high 296 yards — went 84 yards to the house, outrunning K-State’s defenders with an assist from the videoboard, looking up at it to get a feel for where his would-be tacklers were.

“He’s just a great football player,” Klieman said of Hubbard, who entered Saturday as the Big 12’s leading rusher, averaging more than 160 yards per game. “This is a tough offense to defend. You’ve really got to pick your poison.”

Though the Wildcats scored the next 10 points, it was too little, too late.

Rest assured, Klieman said, K-State will be ready to rebound.

His confidence stemmed from what he saw from his players in the locker room after Saturday’s setback.