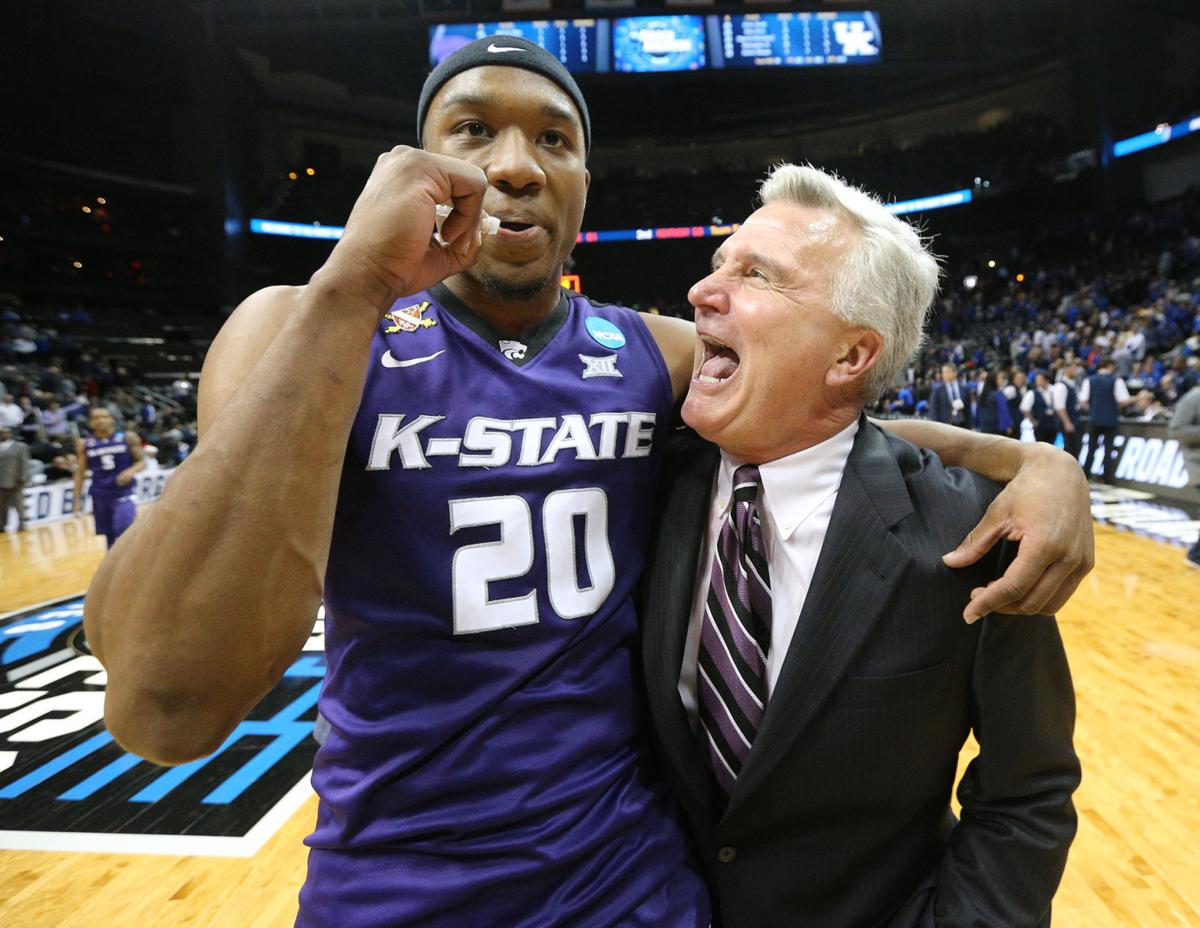 Kansas State head coach Bruce Weber (right) and guard Xavier Sneed (left) celebrate after beating Kentucky 61-58 in the Sweet 16 round of the NCAA Tournament in Atlanta in March 2018. Weber said the victory marked his favorite game as coach since he took over the Wildcats’ program prior to the 2012-13 season. 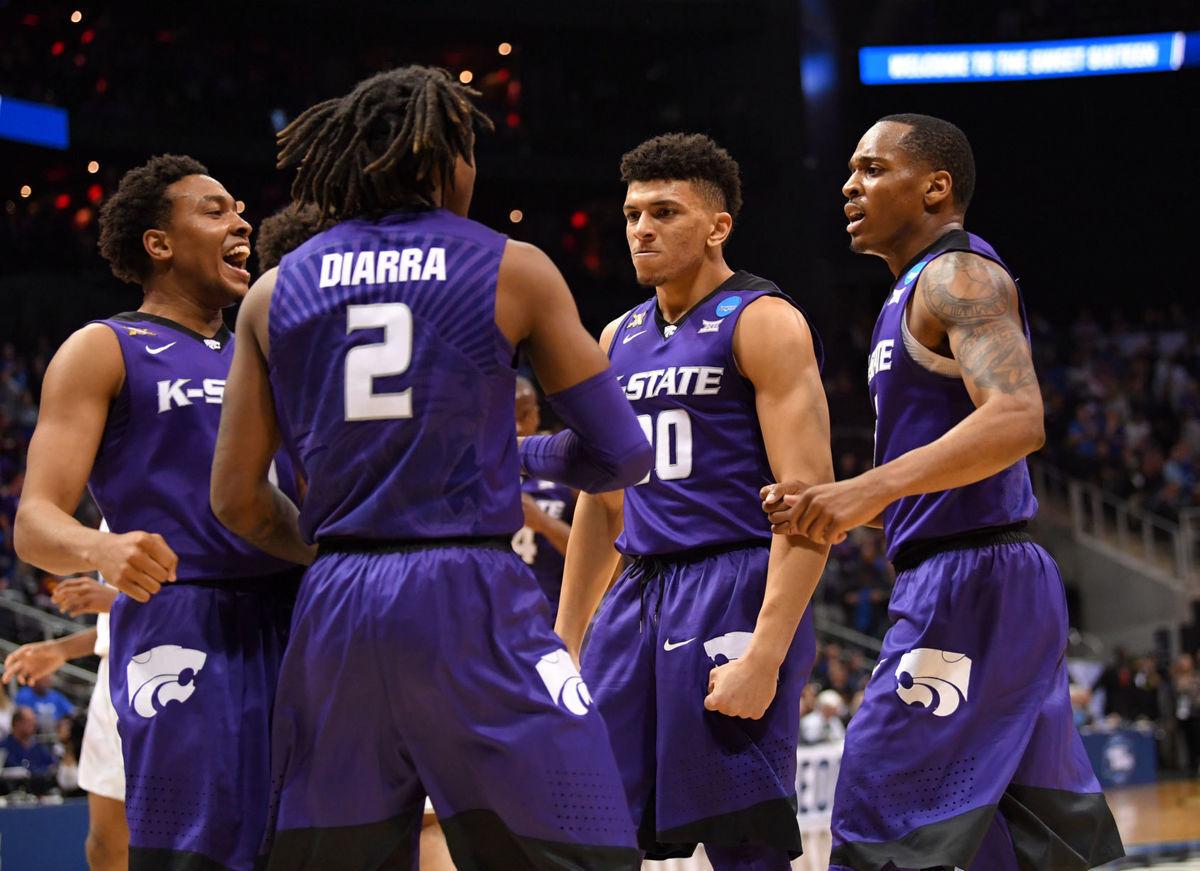 Kansas State flexed its muscles on the way to an Elite Eight appearance during the 2017-18 season. K-State reached the Elite Eight thanks to a 61-58 victory over Kentucky in the Sweet 16 in Atlanta.

Kansas State head coach Bruce Weber (right) and guard Xavier Sneed (left) celebrate after beating Kentucky 61-58 in the Sweet 16 round of the NCAA Tournament in Atlanta in March 2018. Weber said the victory marked his favorite game as coach since he took over the Wildcats’ program prior to the 2012-13 season.

Kansas State flexed its muscles on the way to an Elite Eight appearance during the 2017-18 season. K-State reached the Elite Eight thanks to a 61-58 victory over Kentucky in the Sweet 16 in Atlanta.

In this series, The Mercury asked Kansas State head coaches to identify their favorite game they’ve coached with the Wildcats. In this edition, men’s basketball head coach Bruce Weber reflects on K-State’s NCAA Tournament win over Kentucky in 2018.

Brown always had been a consistent finisher, but to his head coach, it didn’t seem like these layups were worth the extra work. Would Brown ever see the fruits of this labor? If so, when?

“I was just like, ‘What are you doing?’” Weber said. “Just kind of teasing him, making fun. He’s working on all these crazy layups.”

The answer came one season later.

In 2018, Brown sealed K-State’s Sweet 16 win over Kentucky with a game-winning layup in heavy traffic — exactly the kind he began practicing the year prior — that gave the Wildcats a three-point lead with 18 seconds left.

In what Weber called his favorite game he’s coached at the program, K-State followed with the two stops it needed — “Get your butts back on defense,” Weber told his team after Brown’s layup — and held on to make its 12th Elite Eight appearance in school history.

“It’s got to go down,” Weber said, “as one of the bigger shots in K-State basketball history.”

By extension, so does the game.

Consider the circumstances: K-State played that second half without one of its junior stars, as an injured Dean Wade was battling a foot injury. The Wildcats had dispatched Creighton in the first round, played the villain and ousted No. 16 UMBC in the second and promptly knocked off a Kentucky team that featured four future NBA draft picks.

“The whole game, we weren’t supposed to win,” Weber said. “You know what I mean?”

K-State seized its largest lead of thegame, at 52-44, when Sneed attacked a closeout and converted an easy layup. His bench erupted. The Wildcats were up eight with six minutes left.

Kentucky answered, though, with an 8-2 run. That trimmed K-State’s lead to 54-52. Not two minutes later, after P.J. Washington went 1-for-2 at the free throw line and Shai Gilgeous-Alexander converted a scoop layup, things shifted.

Roughly a minute later, Gilgeous-Alexander made an errant pass, which landed in the lap of K-State guard Cartier Diarra. On the other end, Diarra forayed into the lane and scored through a foul. And-one. Diarra missed the free throw, but the bucket gave K-State a 56-55 lead.

That’s the kind of basketball K-State and Kentucky played over the next 90 seconds. Basket here, basket there, but mainly free throws. K-State forward Makol Mawien, who went scoreless, fouled out with 1:32 left and gave Washington an and-one opportunity.

Moments later, after the clubs battled to a 58-all tie, K-State had what it wanted.

At least Brown did.

“He wanted the ball,” Weber said with a chuckle. “He told us.”

Isolated against the 6-foot-5 Gilgeous-Alexander, Brown dribbled once between his legs, and if you blinked you missed the quick hesitation he performed. That let Brown get into the lane, where he used his right hand to fend off Gilgeous-Alexander and his left to finish over Washington.

Plenty of theatrics ensued — K-State’s Amaad Wainright later made 1 of 2 free throws, opening the door for Kentucky to hit a potential game-tying triple, but Gilgeous-Alexander’s contested attempt rimmed out — but Weber and Co. held on.

Closer to the bench, though, the ripples of this win for K-State were beginning to materialize.

Wade, who missed his team’s Big 12 tournament finale and the first two games of the NCAA Tournament with a foot injury, couldn’t exactly celebrate the way his healthier comrades could. He managed four points in eight minutes before he told Weber at halftime, “There’s no way. It hurts too much.”

In fact, another foot injury shelved Wade for his team’s — albeit short — stay at the following year’s tournament. But it turns out that actually helped K-State, at least in one sense.

“We always talk about it with recruits,” Weber said. “He just signed an NBA contract (with the Cleveland Cavaliers) and never got to play in the NCAA Tournament the last two years.

“I think if we had him, we probably had a chance to maybe go to the Final Four that year, which probably (makes) his status totally different, but that’s how life goes sometimes. I’m really happy for him to get a contract now, because I think he deserves it and I think he belongs in the league.”

About a year later, the Minnesota Timberwolves felt similarly about Brown. The team signed him to a contract with its G-League affiliate, the Iowa Wolves.

Brown has some ground to make up if he wants to join his former teammate in the NBA, but either way, that extra layup work three years ago will help — against the Kentucky Wildcats or the Cleveland Cavaliers.