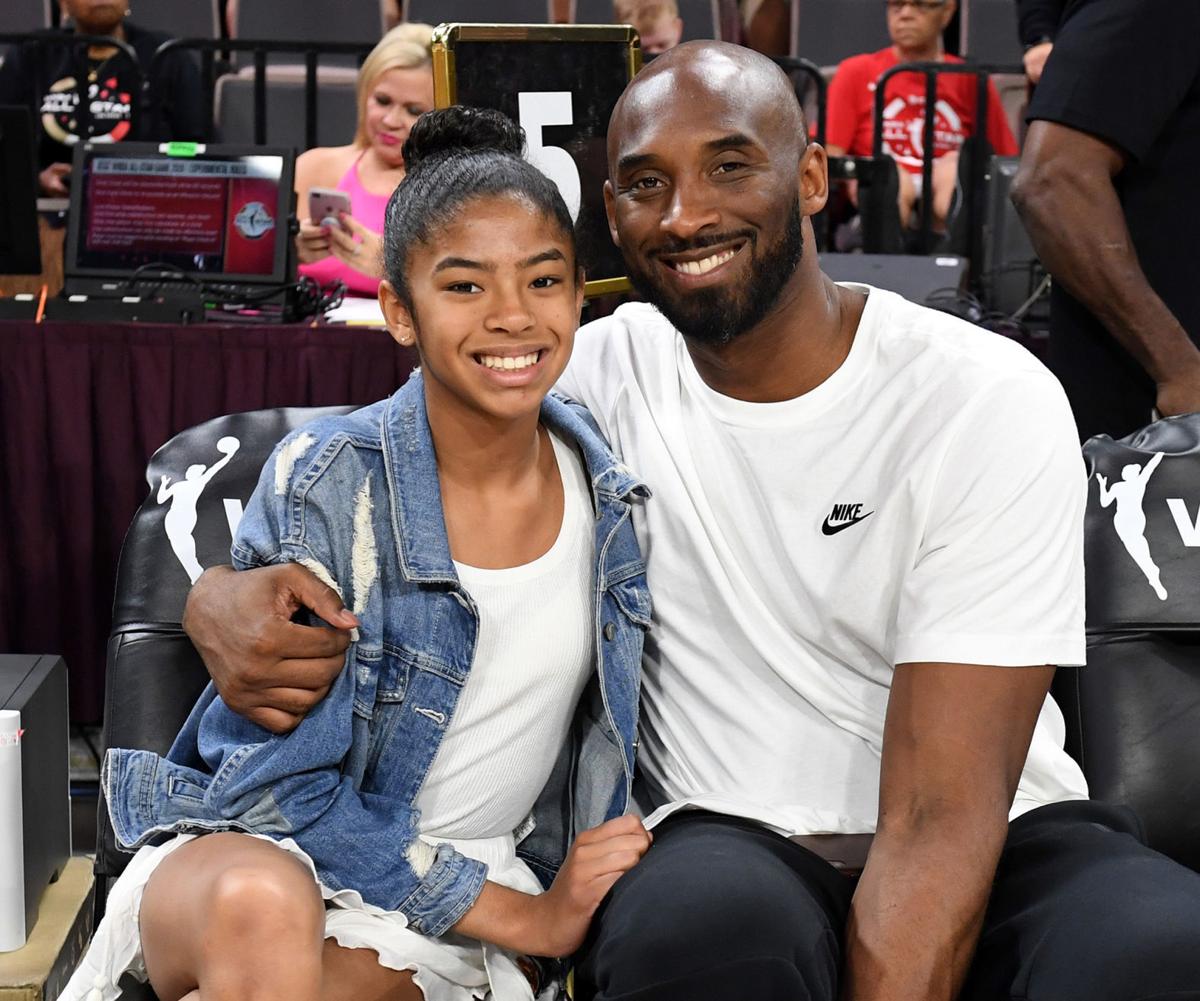 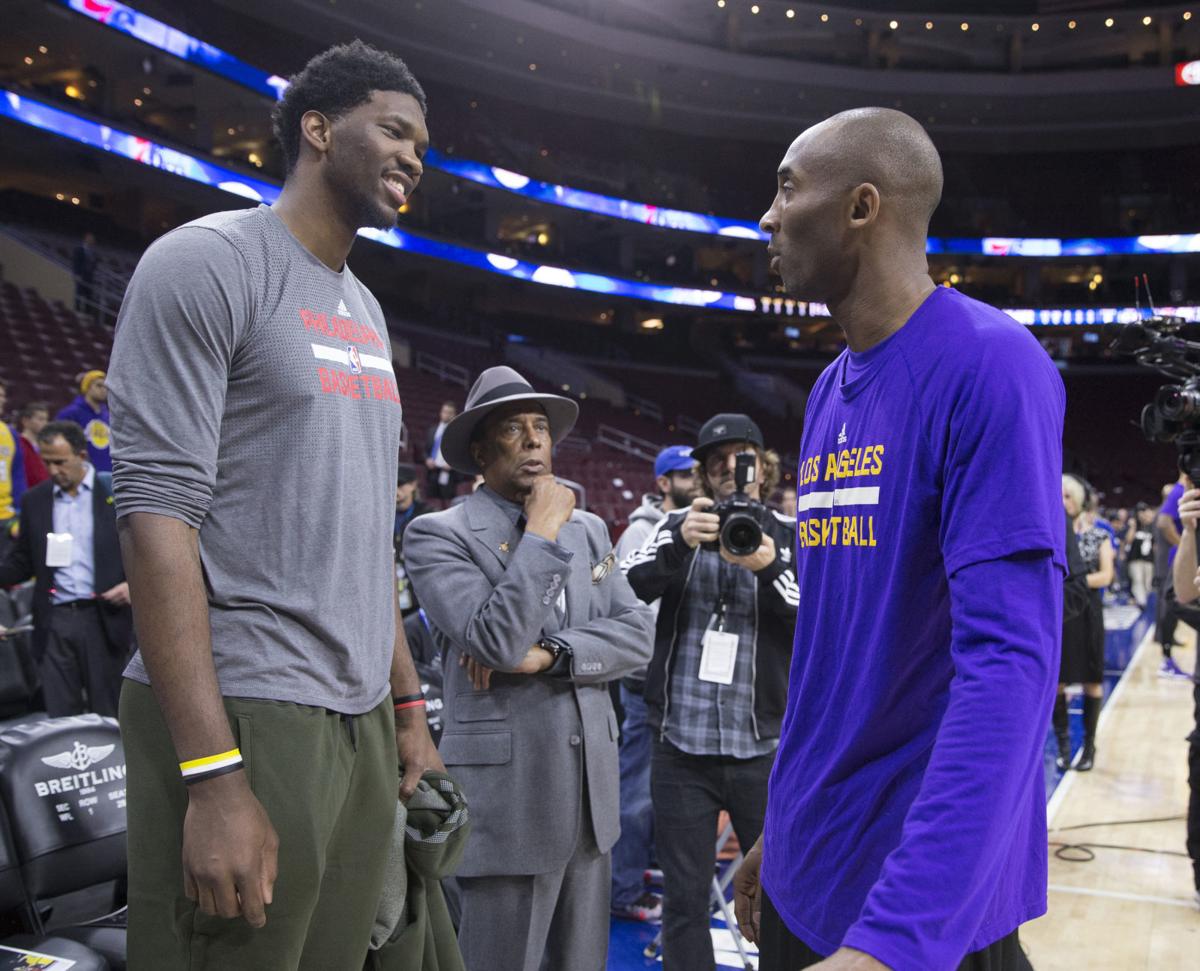 Future Hall of Famer, Kobe Bryant died in a helicopter crash on Sunday, Jan. 26, 2020. He was 41. In this file photo, Joel Embiid (21) of the Philadelphia 76ers talks to Kobe Bryant (24) of the Los Angeles Lakers prior to a game on Dec. 1, 2015 at the Wells Fargo Center in Philadelphia, Pennsylvania. (Mitchell Leff/Getty Images/TNS) 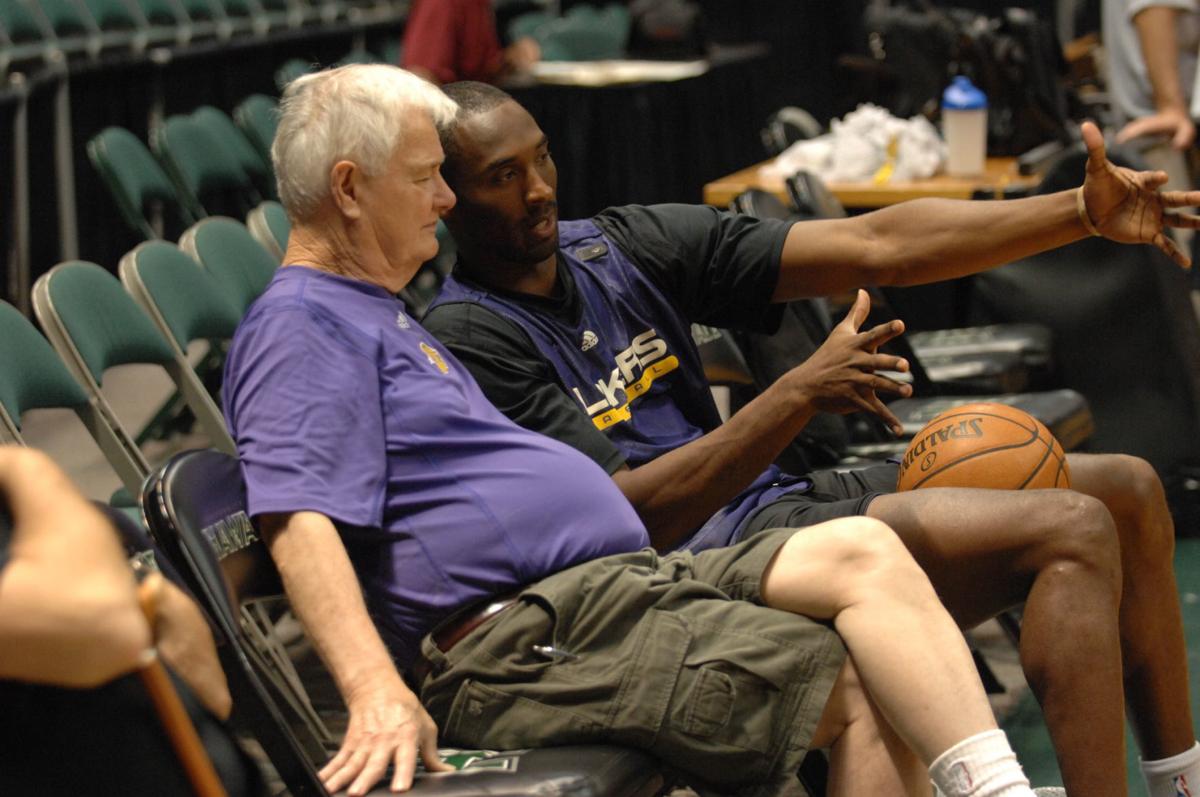 Former Lakers star Kobe Bryant tweeted this photo with Tex Winter after Winter died in Manhattan at 96 in October 2018. Following his death, Kobe Bryant's foundation sent a $15,000 check in Winter's honor to benefit the Boys & Girls Club of Manhattan. Bryant died in a helicopter crash Sunday. He was 41.

Future Hall of Famer, Kobe Bryant died in a helicopter crash on Sunday, Jan. 26, 2020. He was 41. In this file photo, Joel Embiid (21) of the Philadelphia 76ers talks to Kobe Bryant (24) of the Los Angeles Lakers prior to a game on Dec. 1, 2015 at the Wells Fargo Center in Philadelphia, Pennsylvania. (Mitchell Leff/Getty Images/TNS)

Former Lakers star Kobe Bryant tweeted this photo with Tex Winter after Winter died in Manhattan at 96 in October 2018. Following his death, Kobe Bryant's foundation sent a $15,000 check in Winter's honor to benefit the Boys & Girls Club of Manhattan. Bryant died in a helicopter crash Sunday. He was 41.

Kobe Bryant’s stunning and tragic death in a helicopter crash Sunday touched every corner of the world. It united fans and admirers around the globe in a state of mourning.

Manhattan was no different.

Current and former members of Kansas State’s men’s and women’s basketball programs shared their memories of Bryant on social media after the shocking news of his death — along with eight others who also were on board the helicopter, including his 13-year-old daughter Gianna Bryant.

“I join the basketball world in mourning the tragic passing of Kobe Bryant, his daughter Gianna and the rest of victims of today’s helicopter crash,” K-State men’s basketball head coach Bruce Weber told The Mercury. “I had the opportunity to watch Kobe play in high school and throughout his NBA career.

“He had a special competitive drive and work ethic that only a few players ever possessed that allowed him to become one of the greatest players in history. Our thoughts and prayers go out to the Bryant family, his friends and basketball fans around the world for this tremendous loss. He’s gone way too soon.”

Christianna Carr, a sophomore guard on K-State’s women’s team, shared a photo of Bryant and her father, Chris Carr, from the 1997 NBA All-Star dunk contest. Bryant, then a rookie, beat Chris Carr and Michael Finley in the finals after Ray Allen, Bob Sura and Darvin Ham didn’t make it out of the first round.

“Found this picture when my dad lost to Kobe in the dunk contest... thanks for adding a lifelong memory to the Carr Family,” Christianna Carr wrote on Twitter. “You will be missed. RIP to the Legend.”

Barry Brown, who graduated from K-State last year as one of the most decorated players in the history of the men’s program, posted two Bryant-centric tweets.

“Man my heart hurts,” he wrote, before following up with a second tweet featuring two cutouts of Bryant in the two jerseys he wore: Nos. 8 and 24, both of which have been retired by the Los Angeles, the team he starred on for the entirety of his 20-year NBA career.

David Sloan, a junior guard for the Wildcats, paid homage to the all-time great.

“RIP @kobebryant,” he wrote, mentioning Bryant’s Twitter account. “You inspired us all in the basketball world, many of us looked up to you.”

“Not the (GOAT) Kobe!!!!” he wrote Sunday, referring to the acronym for “greatest of all time” before sending another later. “I can’t believe this.”

Gordon still was working through his emotions Monday morning.

Thomas Gipson, a forward who played for the Wildcats from 2011 to 2015, was distraught.

“Nah have to stay off the internet for a while,” he wrote. “I can’t even eat I’m so sick.”

Walker later shared a photo of himself in a New York Knicks jersey guarding Bryant as the Laker calls out a play.

“RIP to the best player I’ve ever played against!!!” Walker wrote. “He made a kid from West (Virginia) believe he could make it too with some hard work and dedication!!!”

Curtis Kelly, who played two years (2009-11) for K-State after beginning his career at UConn, said Bryant’s death put life into perspective for him.

“Leaving home and getting back safely is the most underrated blessing,” he wrote. “My heart been hurting for the Bryant family all day. Prayers up.”

“Kobe Bryant may you rest in peace. When I heard about this, I couldn’t stop thinking about his daughter,” Lowery wrote. “This is sad on so many levels — as a basketball junkie this was devastating news.”

It didn’t come as easy for Drew Speraw.

“There are no words that are right #RIPMamba,” wrote Speraw, the men’s basketball program’s director of operations.

Wesley Iwundu, a K-State great during his four-year career from 2013 to 2016 who now plays for the Orlando Magic, was heartbroken.

“Words can’t express the emotions behind this,” he wrote. “I pray for comfort and strength of the families affected by this tragedy.”

One of Iwundu’s former K-State teammates, Jordan Henriquez-Roberts, praised a player he considered his hero.

“My favorite player of all time is no longer here anymore. Rest In Peace Mamba,” wrote Henriquez-Roberts, the Wildcats’ all-time blocks leader who is in his first season as a graduate student manager for K-State’s men’s basketball program. “

Mitch Richmond, one of the best players in K-State history, overlapped with Bryant for one year. During the 2001-02 NBA season — the final one of a 14-year career which saw Richmond named to the All-Star Game five seasons in a row (1992-98) — he played for the Lakers, a season in which the team won the third of its three consecutive championships.

“YOU WILL BE MISSED...AS WELL AS YOUR DAUGHTER GIGI,” Richmond wrote. “PRAYERS AND LOVE TO YOUR FAMILY.”

For all Bryant accomplished in his 20 years — five NBA championships, two NBA Finals MVP awards, the MVP award in 2008, two scoring titles, 18 All-Star Game appearances (a contest in which he earned the MVP four times) and an 81-point game, among countless other staggering achievements — he once wrote that in a way, it might not have occurred if not for a connection with Manhattan.

Winter’s influence on Bryant never ended. Bryant coached Gianna’s team. And he taught the girls the concepts of the Triangle Offense, which Winter popularized in college before taking it to the pros and helping Jackson implement it with the Lakers and Chicago Bulls.

Bryant relished helping Gianna and the girls learn the offense that brought him such immense success.

“We run the triangle offense. It’s awesome,” Bryant said during an interview with James Corden on The Late Late Show in December 2017. “Listen, I sit there with my kids. The girls will go out and I’ll say, ‘OK, you’re going against a zone, I need you to cross grain, wing entry, hit the two pass to the post, bypass first cutter, second cutter, hit the third cutter.’ And they’ll go, ‘OK ... .’”

After Winter’s death in October 2018, Bryant shared a photo on Twitter that featured Bryant and Winter, sitting side by side.

Winter, Bryant wrote, was “my mentor.”

“I sat with Tex & watched every minute of every game during our first season together,” Bryant said. “He taught me how to study every detail. He was a bball genius in every sense of the word. I’ll miss him deeply. Thank you Tex. I wouldn’t be where I am today without you. Rest In Peace.”

In order to paint an accurate picture of the way the Kansas State women’s basketball team was affected by the death of Kobe Bryant, an NBA leg…