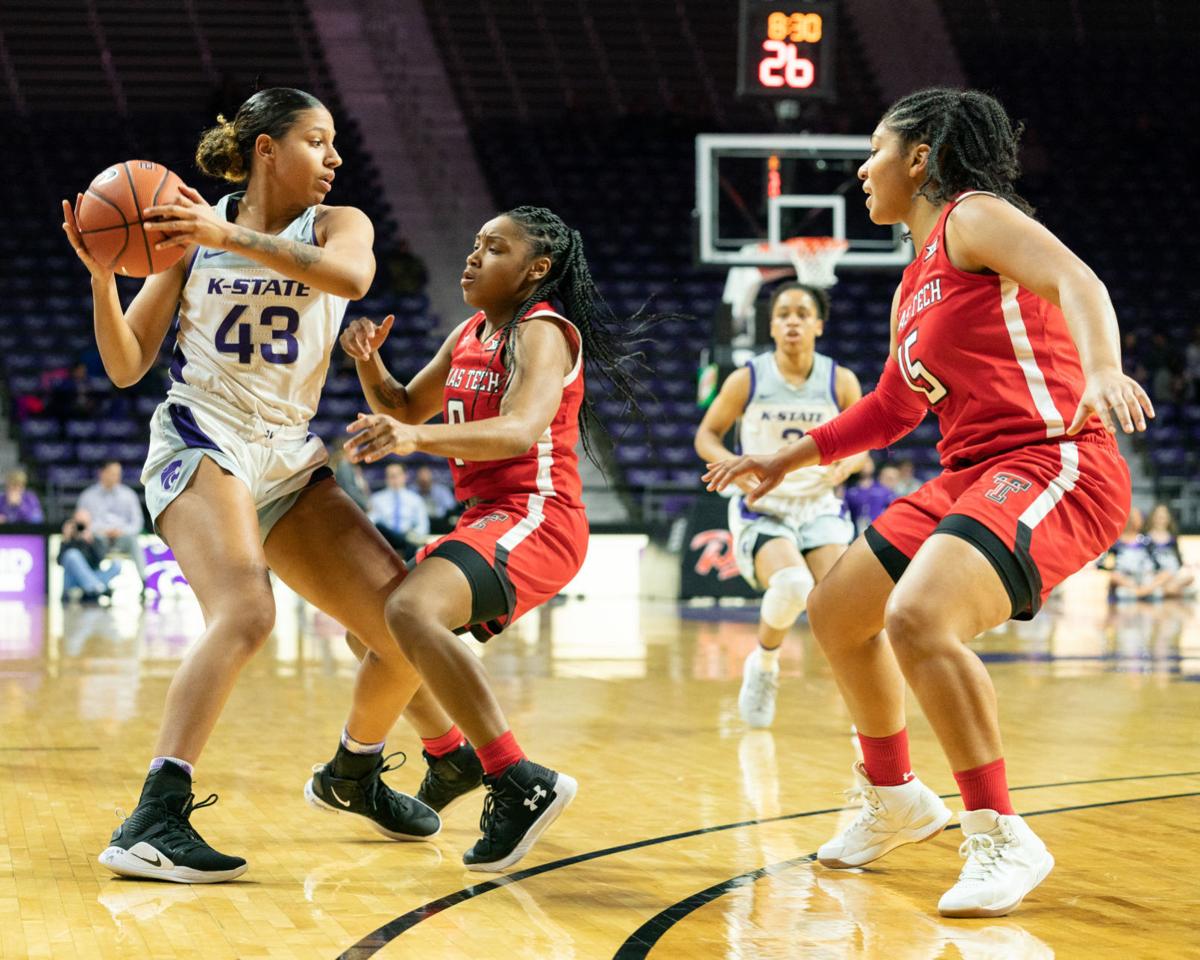 Kansas State’s Chrissy Carr (43) looks for an opening in the Texas Tech defense during Wednesday’s game at Bramlage Coliseum. Carr, a sophomore guard, scored all 14 of her points in the fourth quarter. The Wildcats won 84-70. 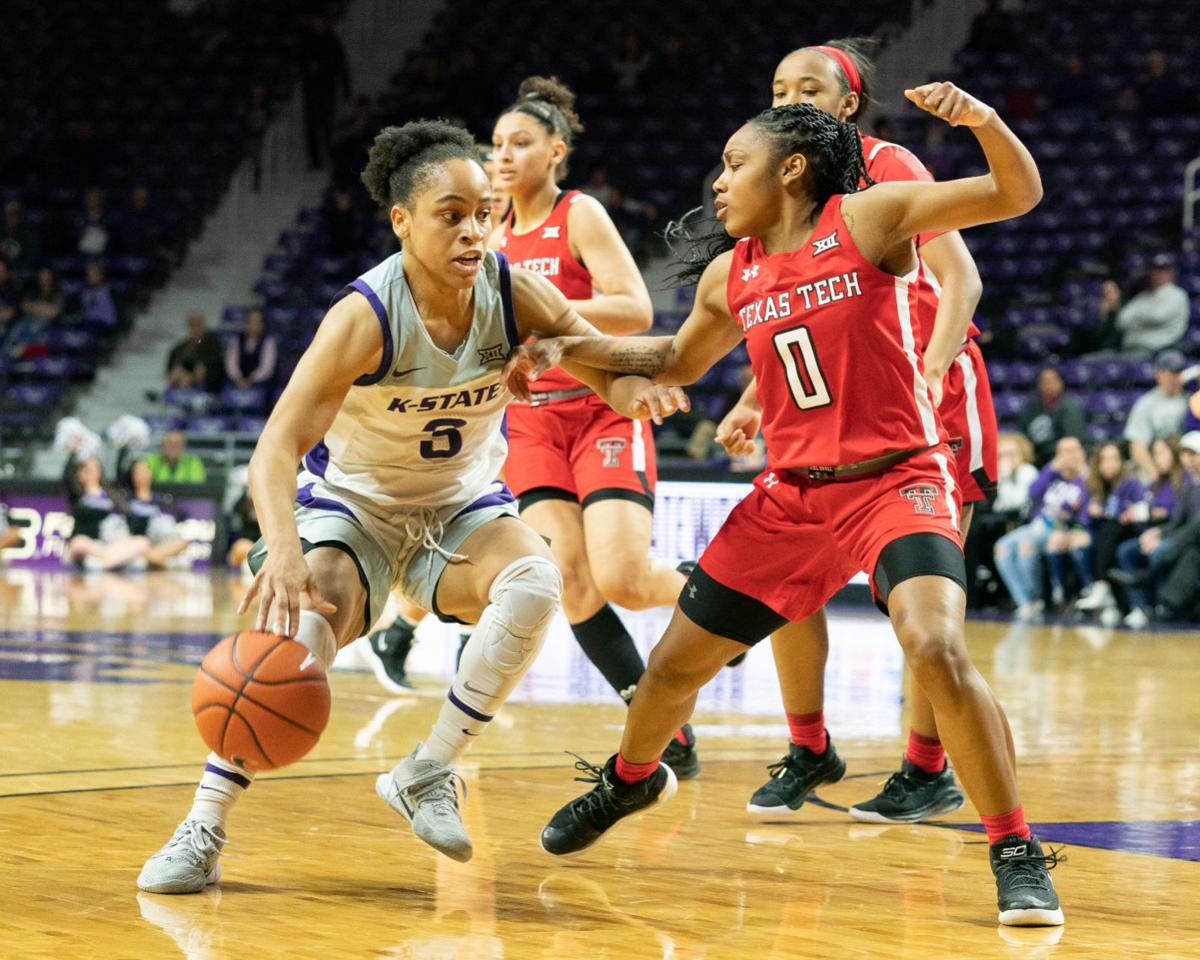 Kansas State guard Angela Harris (left) tries to drive past Texas Tech’s Chrislyn Carr (right) during Wednesday’s game at Bramlage Coliseum. Harris finished with 18 points, making her one of four Wildcats to reach double figures in an 84-70 win over the Red Raiders.

Kansas State’s Chrissy Carr (43) looks for an opening in the Texas Tech defense during Wednesday’s game at Bramlage Coliseum. Carr, a sophomore guard, scored all 14 of her points in the fourth quarter. The Wildcats won 84-70.

Kansas State guard Angela Harris (left) tries to drive past Texas Tech’s Chrislyn Carr (right) during Wednesday’s game at Bramlage Coliseum. Harris finished with 18 points, making her one of four Wildcats to reach double figures in an 84-70 win over the Red Raiders.

The Kansas State player who spurred her club in the final stages of what turned into an 84-70 win over Texas Tech was the one who had spent the previous three quarters languishing through a scoreless outing.

Chrissy Carr entered the fourth frame with the following numbers: Zero points on 0-for-5 shooting and two turnovers. She had scored 20 points last week, but with the way she scored just six on Saturday and zero through three quarters Wednesday, well, all signs pointed toward another rough eight minutes.

So much for that.

Carr scored all of her 14 points in the fourth quarter, including an efficient 2-for-3 mark from beyond the arc, and that was the spark the Wildcats needed to win the fourth quarter Wednesday night, 31-15, sealing their second win over the Red Raiders this season.

“It definitely helps having teammates that trust you,” Carr said. “‘Yoki’ (Ayoka Lee) probably does it the most. She’s always talking about, ‘Hey, you’re going to hit shots. Hey, I believe in you.’ Hearing that, even when you’re not believing in yourself, hearing that somebody else believes in you is nice to have.”

Those were all important, and they mattered, albeit for different reasons.

For one, K-State more than doubled up Texas Tech in the fourth. Harris scored 11 of her 18 points in the final period, too, hitting a couple mid-range jumpers that helped her club widen its lead.

In fact, the Wildcats faced a two-point deficit when the third quarter came to a close. When Carr banked in a 3, K-State took a two-point lead, and the sophomore wore something resembling an “I’ll take it” expression as she jogged back on defense.

“When it left my hands, I definitely said, ‘Oh gosh,’” Carr said with a smile. “When it went in, it was just one of those, ‘All right, well, it went in, so you can’t do anything about it.’ It was probably not the best shot I could have taken, but sometimes you make bad shots.”

At that point, though, the game was still close. It wasn’t until Lee converted an and-one moments later that the Wildcats began to pry open the floodgates.

For K-State, that three-point play kicked off a 16-3 run. In that span, the following happened: Williams finished inside, Carr hit a mid-range jumper in traffic, the Wildcats hit six straight free throws, and Harris canned a triple that was more cherry-on-top than a we-need-this basket.

That, in short, is how K-State avoided a second-straight defeat.

“I thought the two things of the second half that were critical,” Mittie said, “were we owned the glass in the second, and we were able to pound the ball in the paint better than we were in the first half.”

All that changed against K-State. The Red Raiders (14-6, 3-6) made just 7 of 33 triples, which translates to 21%, and only four players converted from distance.

Mittie had his gripes — fouling 3-point shooters on three occasions, he said, obviously was too many — but the attention the Wildcats paid to defending the triple paid off.

“I did think our players were locked in to running them off the line,” Mittie said. “I said earlier: This is a team that came out of a game hitting 20 3-pointers (in its) last game. They beat Oklahoma State by 30. There wasn’t a hotter offensive team in our league, so to cool them off a little bit was a pretty good effort by our group.”

Yet K-State only needed to rally late because it wasn’t in a great spot early.

In the second quarter, the Red Raiders began doubling Lee. That forced other Wildcats to make plays. Not all of them did. Beard hit a triple and Emma Chapman cashed a mid-range jumper, but outside of that, Lee’s teammates had trouble producing on offense.

“We were kind of just grinding through the first half,” Mittie said. “So my fault in the first half, and then they played really well in the second half.”

With the win, K-State has now three of its last four. Carr has now sandwiched double-figure scoring games around that six-point outing against TCU on Saturday.

The Wildcats are also back at .500 — but remaining there will pose a challenge.

Next up for K-State: A home matchup with No. 2 Baylor on Saturday.

The Bears have won 13 straight, steamrolling through opponents with ease, and they look as formidable as ever.

The Wildcats will have to do a lot right to break that streak, but for now, they’ll take solace in knowing they’ll enter the game trending in the right direction.

“Honestly, the thing that keeps me going is my teammates,” Carr said. “I have to keep going for them even if things aren’t going my way. Find a way to make it work, not only for myself, but for them, too.”

Kansas State senior forward Peyton Williams has put herself in position to win yet another award.