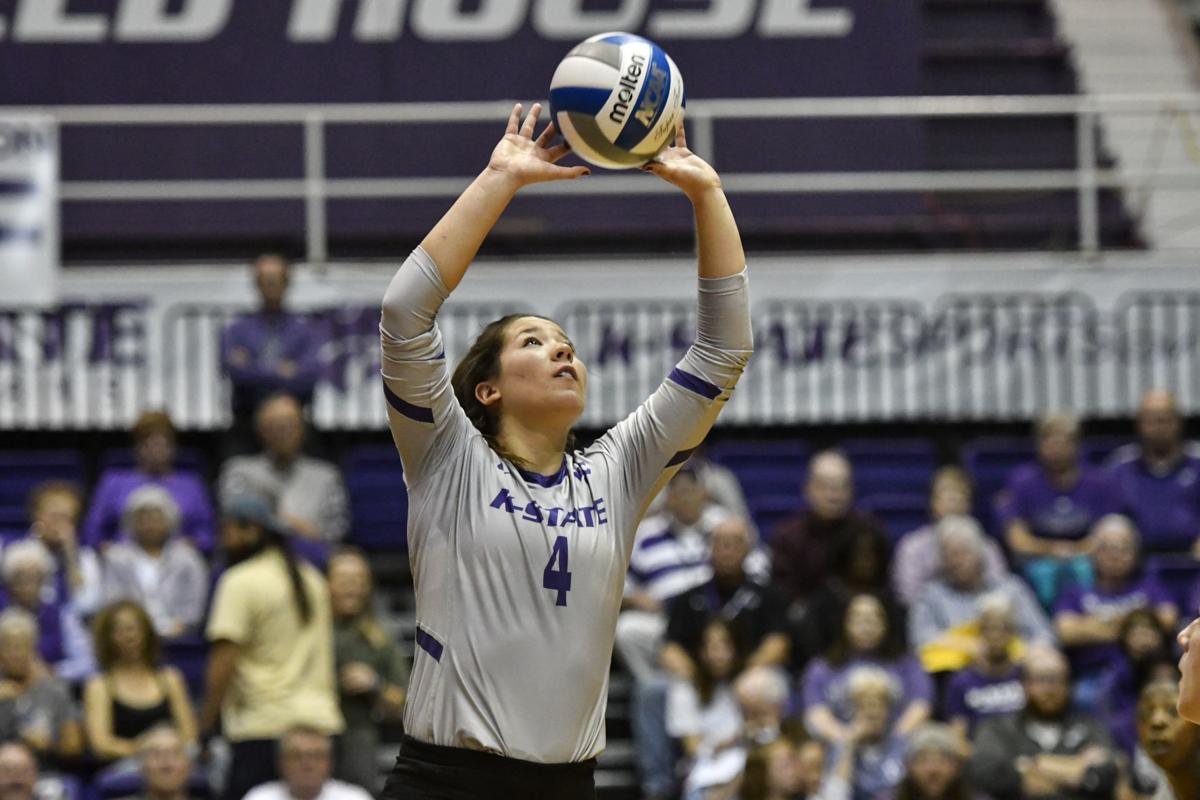 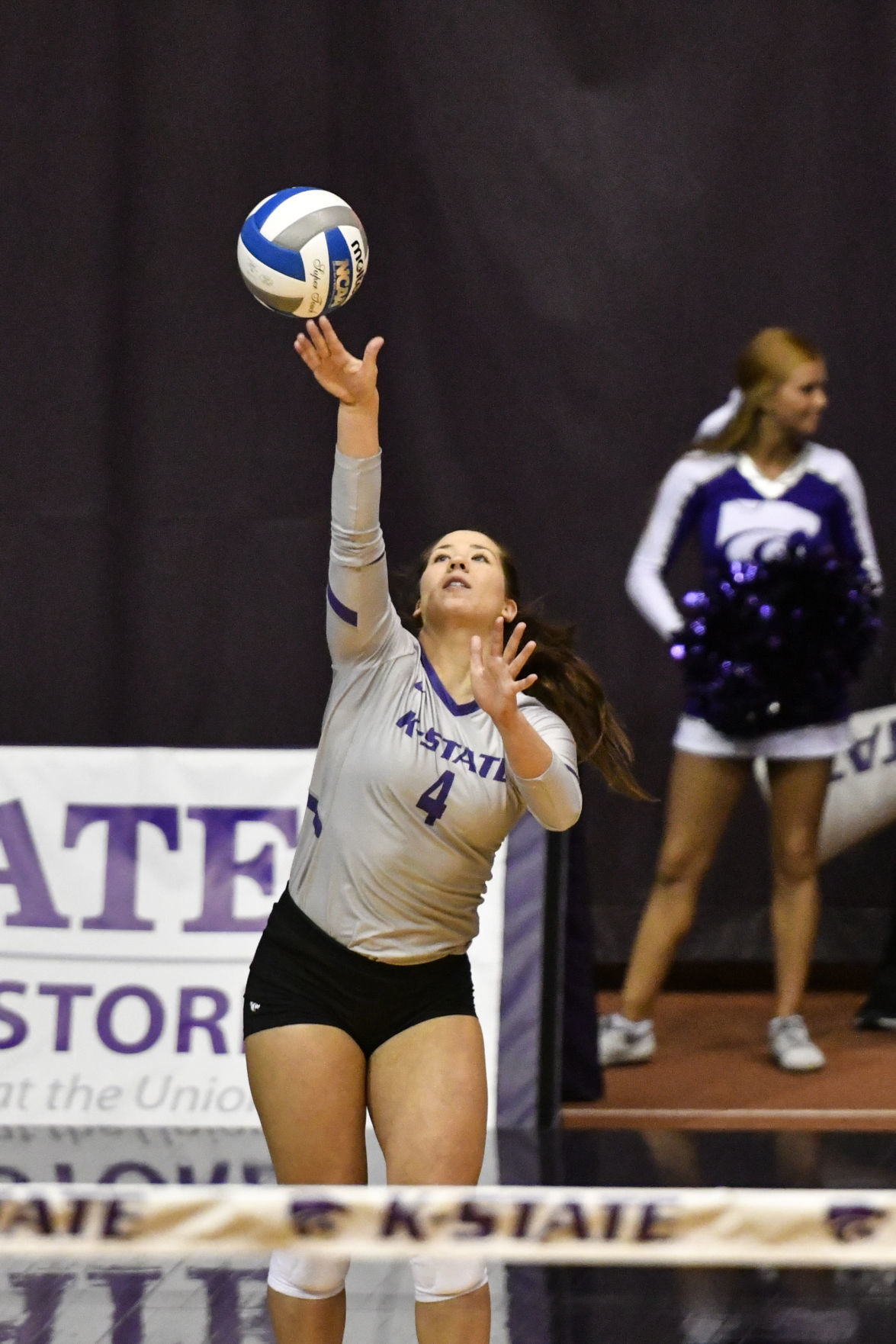 Kansas State setter Sarah Dixon (4) serves the ball during last season’s match against Texas Tech at Ahearn Field House. Dixon is one of just two seniors on this year’s squad. Nine of the 16 roster spots are filled by freshmen or redshirt freshmen.

Kansas State setter Sarah Dixon (4) serves the ball during last season’s match against Texas Tech at Ahearn Field House. Dixon is one of just two seniors on this year’s squad. Nine of the 16 roster spots are filled by freshmen or redshirt freshmen.

To say that Kansas State’s volleyball team will be young this season would be an understatement. Of 16 roster spots, five of them are filled by freshmen and four more by redshirt freshmen. Head coach Suzie Fritz said this is a completely different team from 2018 — and she’s right. But she also said she feels good about the competition at each position as the Wildcats prepare to open the season at the Wolfpack Invitational in Raleigh, N.C., against N.C. State on Friday.

“We have Sarah Dixon, who is our returning starter, and a veteran,” Fritz said. “She is savvy. She makes good decisions. She, I think right now, is kind of the heartbeat of the team. (It’s like), ‘She says, we do’ a little bit right now. She has a strong voice on the team and has done an incredible job of not necessarily making it her show but making it our show.

“I think leadership that grows from the inside out can make a team pretty special. She’s given young players a voic,e and she needs to, because there are a lot of them. She is smart enough to realize that for us to be successful, they need to have a voice in what is happening, so that’s really good.”

There is still competition at Dixon’s natural position of setter, though. One of the Wildcats’ freshmen, Teana Adams-Kaonohi, is making strides.

“(Adams-Kaonohi) has a lot of potential right now,” Fritz said. “I think Sarah has the nod right now just in terms of and consistency. ‘Te’ is playing like we expect her to play. She has days when she is doing really good, and then she will have a couple off days, and she knows that. Her just getting a little bit more consistency and being able to make small adjustments a setter has to make will be important for her overall development. But they both are really playing well.”

Libero is where the Wildcats have “the most horses in the barn,” Fritz said. Jacque Smith is a returner who played as a reserve last year, though not as much as Fritz would have liked, and has shown great preparation. McKenzi Weber, another Wildcat senior, has blossomed into a player Fritz said is “another true success story.” Two freshmen, Dru Kuck and Loren Hinkle, also have a hand in the jar. Hinkle was an outside hitter in high school and for her club team but has transitioned to libero for the time being.

The outside hitter spot, actually, is where the Wildcats are scrambling. Brooke Heyne, who was on the 2018 roster, cannot play anymore.

“We have a little bit of an issue at the outside hitter position in terms of depth, so we’ve got to keep them healthy,” Fritz said. “That will be a big objective for us. We have four of them training right now, three of them are going to play at a time, so it’s not as many as we’d like and losing Brooke is significant.

“Brooke Heyne is taking a medical hardship. She’s got an injury that is not going to allow her to do what we had hoped. It was a lingering injury, but a recent decision. I think right now, we need Anna Dixon, and Holly Bonde, who will be a freshman but who we redshirted coming off of an ACL injury. So we need one of those two to continue and step up.”

Two players of importance are Abigail Archibong, a freshman, and Kenzie Smith, a redshirt freshman. Because of the lack of depth at outside hitter, Archibong has played there at times. She’s only had 16 days in the position from the training period before the Wildcats went to Brazil in addition to the eight days they were there.

“I am amazed at what Abi is doing right now,” Fritz said. “She played a little bit of that in high school and in club, but has never had really enough work to do what she is doing. We are trying to get her through the process of failing right now, because there is going to be some of that for her. But I have been so impressed at what she has done transitioning to that position. It’s been very special and very selfless of her in regards to what it means to her team to create some depth there for us.”

Smith has played the “best teammate” role for the Wildcats, said Fritz.

Smith is a local product, starring at Manhattan High, helping the Indians to a berth in the state tournament three straight seasons and setting a single-season program record for assists (983) as a senior. She’s also the daughter of Michael Smith, a star receiver at K-State in the early 1990s under Bill Snyder who later served on the football coaching staff.

Kenzie Smith is a utility player for now, because Kansas State had to move some pieces to have just a little more depth at outside hitter, which will still only be about three or four players.

“She is playing as a specialist and some as a setter,” Fritz said. “She is about the best teammate that someone could ever ask for. She is selfless, she will do whatever we ask her, she is competitive and can jump into any role on our team and find a way to make things happen. So we have three people training at that position.”

Fritz already has tried to do what she can to combat the youth of the program and the struggles at outside hitter. Working in her favor, she said, is the strength of her veterans’ leadership.

And the freshmen don’t seem too green.

“I think as a team and as a coach, we have to control the things we can control,” Fritz said. “Being young is not one of them. There are some things that come along with being young that I think we are aware of, but I think the goal is just to improve fast, grow up fast, and get them as much experience as we can. I think we have been able to close that gap because we got them in the spring. We got to go to Brazil, a number of them played (for) USA (Volleyball) this summer, so I don’t really think of them as being rookies anymore. I think they’ve had enough experiences that we can expect more of them right now. Time will tell.”