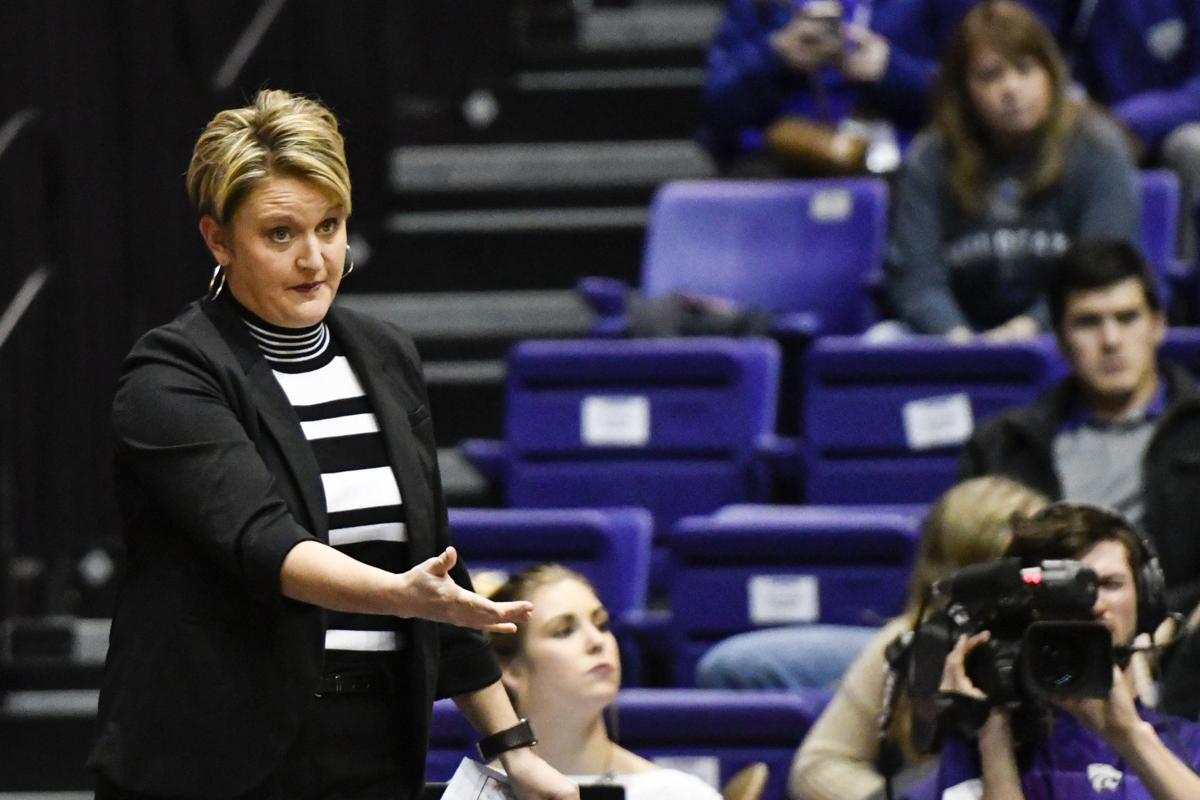 Kansas State head volleyball coach Susie Fritz motions to her players during the match against Texas Tech at Ahearn Field House last season. Fritz and the Wildcats fell in straight sets to the Red Raiders on Wednesday. 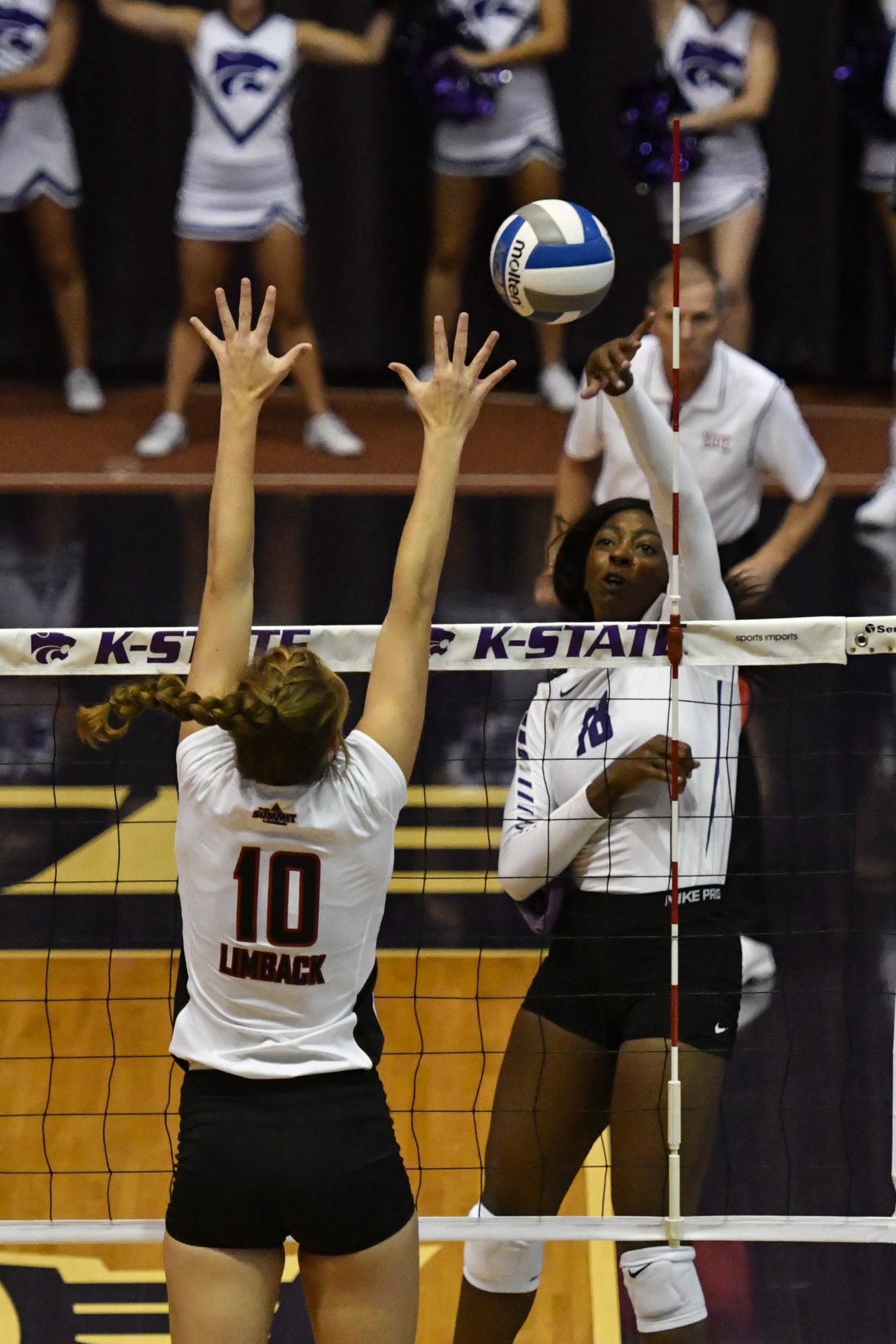 Kansas State opposite Gloria Mutiri (18) spikes a ball during the match against Omaha during the 2018 season at Ahearn Field House. Texas Tech swept the Wildcats, 3-0 Wednesday evening.

Kansas State head volleyball coach Susie Fritz motions to her players during the match against Texas Tech at Ahearn Field House last season. Fritz and the Wildcats fell in straight sets to the Red Raiders on Wednesday.

Kansas State opposite Gloria Mutiri (18) spikes a ball during the match against Omaha during the 2018 season at Ahearn Field House. Texas Tech swept the Wildcats, 3-0 Wednesday evening.

On so many occasions Wednesday night, Kansas State did everything right against Texas Tech. Made a slick dig. Placed the ball well on kills. Dove for balls, even, and prolonged sets that never seemed to end.

The problem for the Wildcats: the Red Raiders could say the same.

“I think that was a frustrating performance on our end,” K-State coach Suzie Fritz said. “We’ve been playing significantly better, and had felt like we were making pretty consistent improvement — frankly, most days, up until that one.”

You could start with each team’s hitting percentage — K-State finished at .161, while Texas Tech hit .226 — or even the blocks each group totaled — the Wildcats tallied nine, the Red Raiders seven — but neither of those will properly explain how the hosts dropped their third loss in four matches.

The real story was in the long rallies within each set.

The first frame did lots to set the tone for the rest of the match. It included 13 ties, 11 lead changes and enough swings of momentum to last an entire match, let alone one game.

The star of the first set, Texas Tech outside hitter Emily Hill, did what she does best: score. She finished with 11 first-set kills. By the end of the match, that number rose to 21.

“She’s a really good attacker,” Fritz said of Hill, who added 10 digs and two blocks. “She’s what we would consider rangy, meaning she’s got a lot of shots. She moves the ball around really well. I think, as coaches, we have to do a better job of preparing them for what’s coming.”

The second set followed a similar script. Back-and-forth. Back-and-forth. Neither side could create much separation — nobody led by more than three the entire set — until the visitors claimed three of the last four points, punctuated by Brooke Kanas’ kill, sealing another set win.

“You’re trying to push the reset button every point, or every game,” Fritz said. “So you hope that there’s some sense of urgency after being down two, to try to find your way a little bit more. We just never got quite in a very good rhythm in that one.”

The set Texas Tech (12-5, 2-1) won decisively was the third and final. The Red Raiders bolted out to a 6-1 lead, aided by a trio of Wildcat errors, and they never faced much resistance. Even when K-State battled and extended rallies, it couldn’t finish them. That honor belonged to Texas Tech.

All told, K-State got 12 kills from opposite hitter Gloria Mutiri and 10 from outside hitter Anna Dixon. After that, a drop-off: Outside hitter Brynn Carlson finished with five kills, while Bonde didn’t record another after the first set.

“I thought Gloria played relatively well,” Fritz said. “I wish we would have been able to get her a few more swings. She was by far our most consistent (player) offensively.”

For the Wildcats, things won’t get any easier moving forward.

K-State will visit No. 1 Baylor on Saturday before hosting No. 6 Texas next Wednesday — the two best teams in the Big 12.

First things first, though. The Bears and standout outside hitter Yossianna Presley demand the Wildcats’ attention.

“I think we have to generate more kill production on our side,” Fritz said. “We’ve got to be better at defending left-side attack. They’ve got probably the best outside hitter in the country right now. She’s kind of a handful. I think we’ll need to be good at both of those things.”