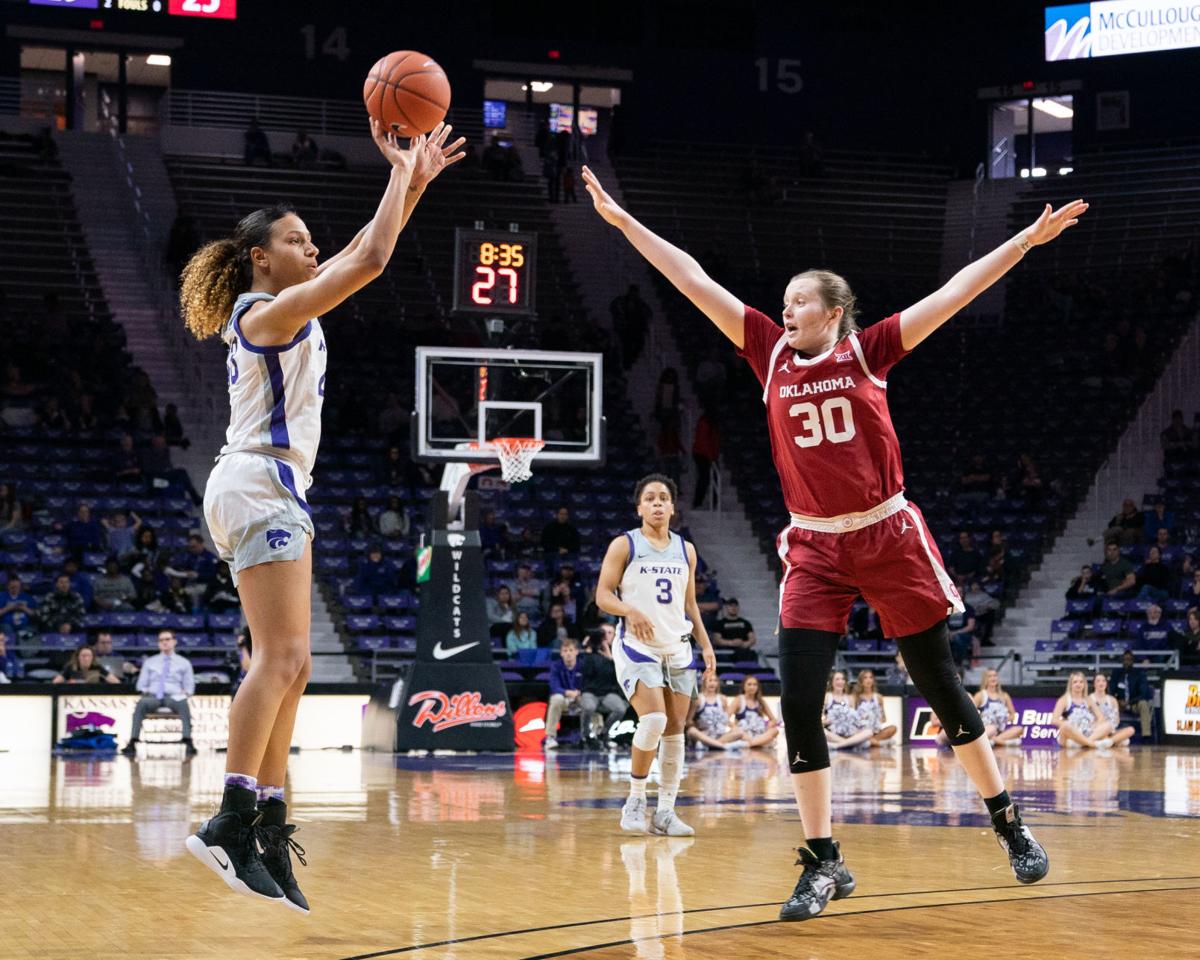 Kansas State’s Chrissy Carr rises for a 3-point attempt during the team’s game against Oklahoma at Bramlage Coliseum last weekend. Carr scored a game-high 20 points in Wednesday’s win at Kansas, including a program record-tying four 3-point makes in the third quarter. 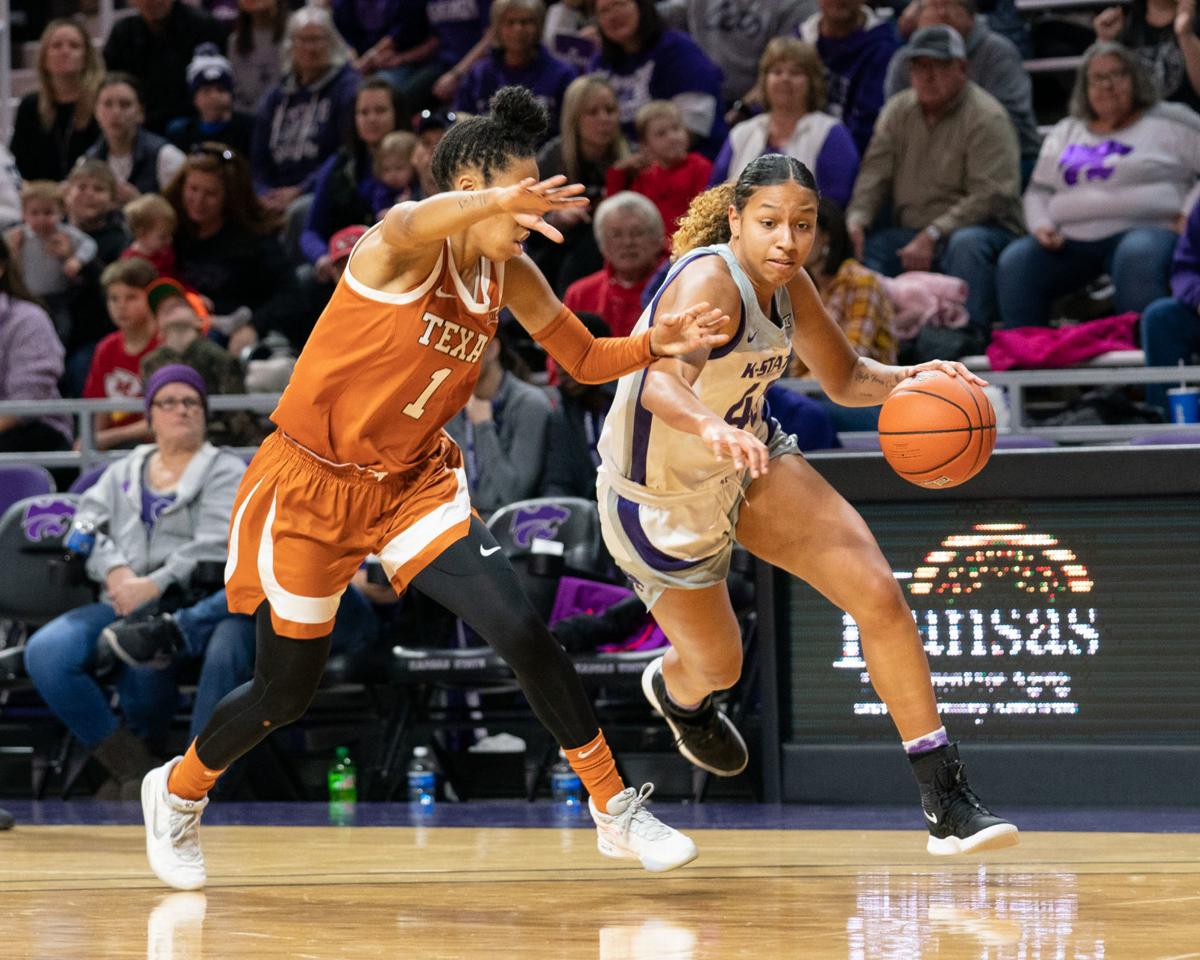 Kansas State’s Chrissy Carr (right) drives past Texas guard Sug Sutton (left) during a game at Bramlage Coliseum on Jan. 19. Carr has scored 20-plus points four times this season, with her latest coming in Wednesday’s win over arch-rival Kansas in Lawrence.

Kansas State’s Chrissy Carr rises for a 3-point attempt during the team’s game against Oklahoma at Bramlage Coliseum last weekend. Carr scored a game-high 20 points in Wednesday’s win at Kansas, including a program record-tying four 3-point makes in the third quarter.

Kansas State’s Chrissy Carr (right) drives past Texas guard Sug Sutton (left) during a game at Bramlage Coliseum on Jan. 19. Carr has scored 20-plus points four times this season, with her latest coming in Wednesday’s win over arch-rival Kansas in Lawrence.

The tale of how Kansas State guard Chrissy Carr emerged from one of the worst slumps of her young career starts smack dab in the middle of the hard times.

There, several times over the last three weeks, K-State coach Jeff Mittie helped Carr review her shots from previous games. Over the last six games, all Big 12 contests, Carr averaged just 6.7 points per game on 23% shooting. She also was making just 18% of her 3-pointers.

What was the issue? Even casual observers know that Carr is a scorer, and a good shooter. She averaged nearly 10 points per game last year. Heading into this year’s conference slate, Carr was putting up 12.3 points a game.

“That’s kind of what it was,” she said. “Just understanding that everybody goes through slumps. Everyone has bad games. It’s just a matter of when it was finally going to end. That was the biggest thing.”

Notice Carr used the past tense.

That’s because her slump came to an end in K-State’s 69-61 road win over Kansas Wednesday night.

She tallied 20 points, the fourth time this season she’s reached that mark, and she made 4 of her 9 triples, all in the third quarter. She started with a flurry of mid-range jumpers, plus a driving layup, before finding the range from further back in the third stanza.

That, she said, actually was part of the reason she was able to escape the funk.

“I feel like it helped that I established myself in the paint,” Carr said, “in the first couple possessions of the first quarter.”

That Carr felt so relieved to finally record a game she was proud of — on one occasion during the six-game stretch, she needed 17 shots to score 10 points — speaks to the way she cares about the team and her role on it.

How she did so is another story.

During her slump, Carr consulted both Mittie and her father, assistant coach Chris Carr. She has several jobs on the team, she said, and she wasn’t happy with the way she was performing one: Making open shots.

“I feel like I’m not doing that,” Carr told them.

So on Wednesday, when she began to do so, she felt good. Celebrated a little bit.

There was a catch, though.

“I had to get amnesia real quick and get back on defense and do it again,” Carr said. “That was what was going through my head — ‘Take and make your open shot.’”

All told, Carr had one of her better games of the season, at least on the scoring front: 20 points on 7-for-15 shooting, plus the 4-for-9 mark from distance. She didn’t hand out any assists, and she only grabbed one rebound, but at this point, she’ll take it.

Her team will, too.

Carr’s rise from her slump represents the next step in the improvement of the Wildcats’ guard play. K-State often relies on forwards Peyton Williams and Ayoka Lee to handle the scoring load — rightfully so; the duo combines to average 32 points per game — while its guards have languished in recent days.

Part of the reason the Wildcats (9-9, 3-4 Big 12) have now won two straight is because that trend is slowly dissolving on the guards’ end. There was Carr’s sterling outing, sure, but point guard Angela Harris also is averaging 13.5 points and 3.5 assists across K-State’s last two games.

K-State will look to make it three when it travels to TCU on Saturday.

“Honestly, I didn’t know we were back at .500 until Angela said something last night,” Carr said. “The thing is, ‘Yeah, we won. That’s great. All right, cool. Now, TCU. Let’s figure out how to get another win.’ We’re more worried about the winning streak than we are about, A, the losing streak, or B, our record that was not that good.”