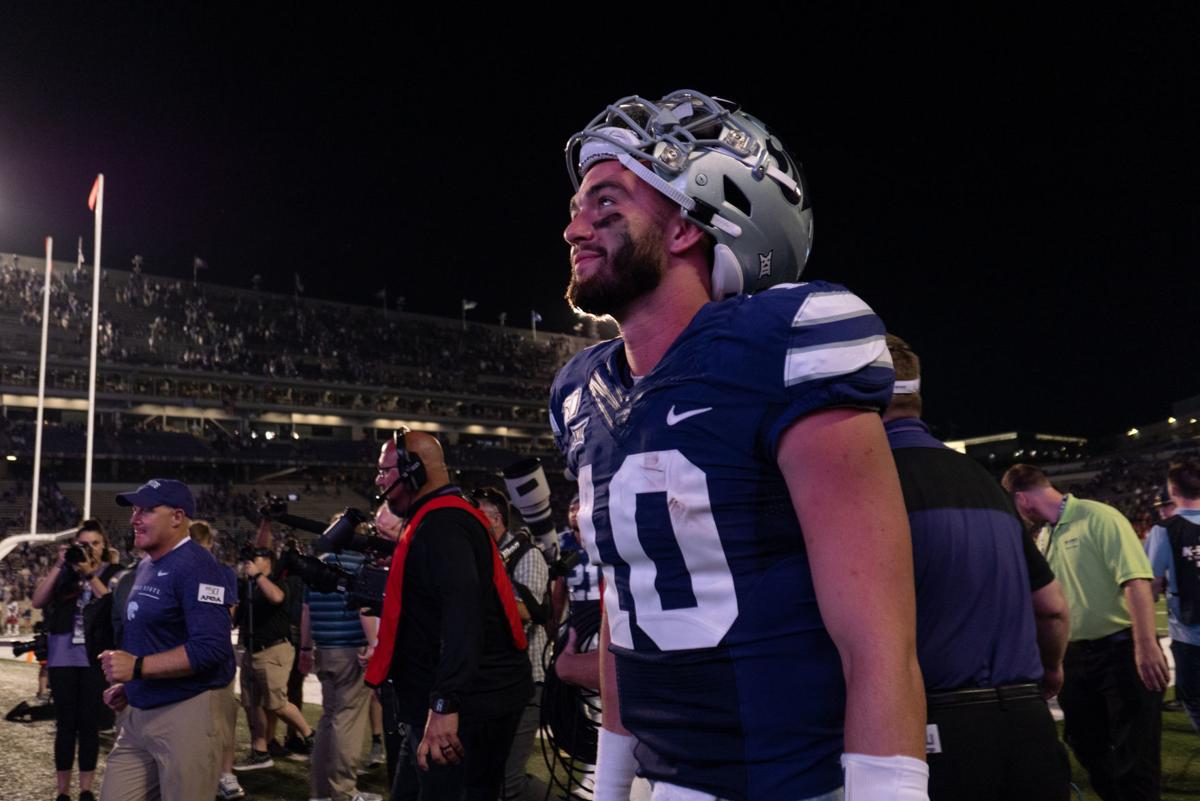 K-State’s Skylar Thompson (10) walks off the field after defeating Nicholls 49-14. Thompson had 212 passing yards and a touchdown. 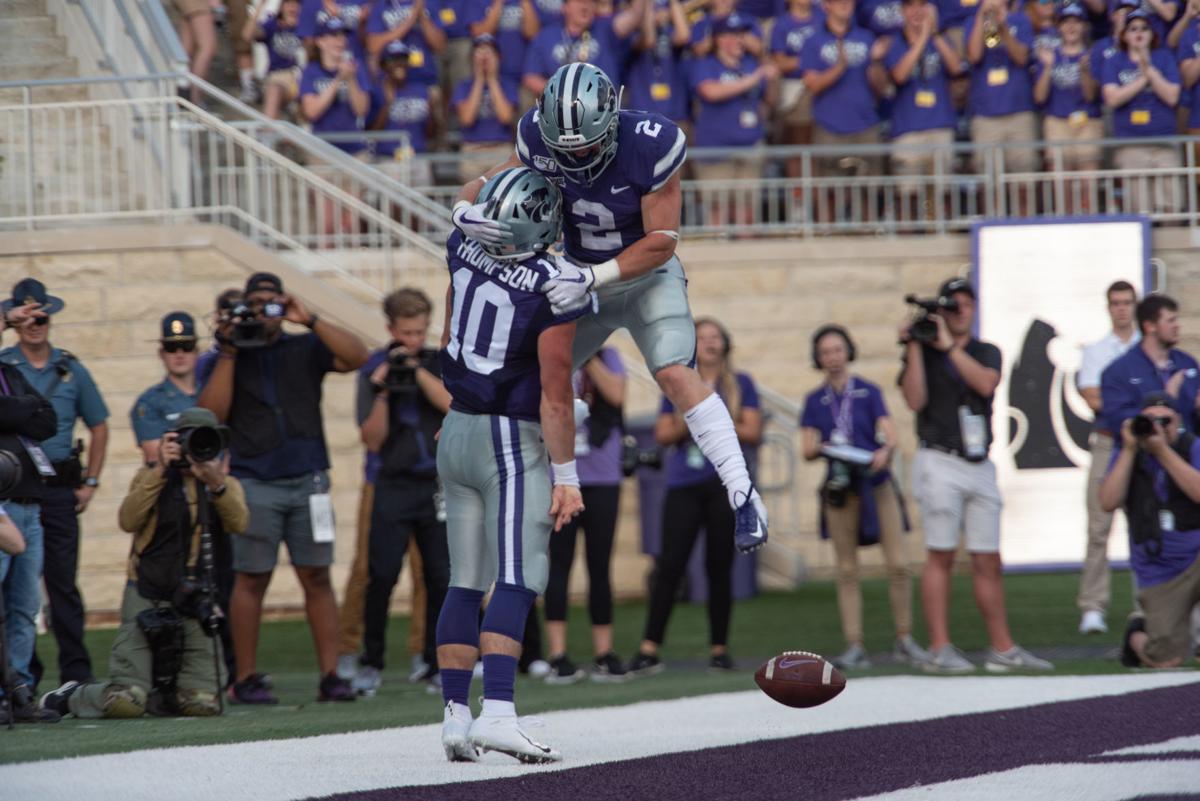 K-State’s Harry Trotter (2) jumps on Skylar Thompson (10) after Thompson ran the ball into the endzone making the score 14-0.

K-State’s Skylar Thompson (10) walks off the field after defeating Nicholls 49-14. Thompson had 212 passing yards and a touchdown.

K-State’s Harry Trotter (2) jumps on Skylar Thompson (10) after Thompson ran the ball into the endzone making the score 14-0.

Skylar Thompson was electric Saturday night, passing and running and leading his Kansas State squad to a 49-14 win over FCS foe Nicholls in emphatic fashion, but it was the lead up to this moment that made the junior quarterback’s outing so encouraging for those rooting for him.

The story begins with the hiring of new head coach Chris Klieman, who turned K-State’s 2018 quarterback situation on its head.

Last season, Thompson will tell you, he was subbed in and out with such regularity that when he made a mistake — interception, incompletion, whatever — he constantly was looking over his shoulder.

There always was a chance that last year’s coaching staff would pull Thompson in favor of fellow quarterback Alex Delton. Neither Thompson nor Delton was named the starter, not officially, so the coaches turned to whoever had the hot hand — or at least whoever wasn’t stalling the offense.

But Delton transferred to TCU, and when Klieman took over, he assured Thompson he was the starter. No questions asked, no strings attached. Thompson was the guy.

In the practices that followed, Thompson felt the difference.

“I go out there and play free and not worry about making a mistake,” Thompson said at Big 12 Media Days in July. “That’s what’s given me so much confidence and why I’m so, so excited for the season that lies ahead.”

That all sounded great in July, and even better in August, but the only way Thompson was going to prove it was by playing like it Saturday night.

Thompson completed 16 of 22 passes for 212 yards and two touchdowns (one rushing and one passing), trouncing Nicholls and making sense out of his own words.

“I felt really confident,” Thompson said after the game. “I wasn’t surprised or anything. I was confident. I’ve been feeling this way since this coaching staff came here. I’ve been ready to step on the field and show everybody what they’ve been talking about with me: having confidence and changing a little bit.”

One of the best examples came in the second quarter. Thompson scanned the defense and sensed a pass rush coming, so he audibled from a pass to a run for James Gilbert.

Seconds later, Gilbert was jogging into the end zone.

“Man, Skylar has taken the next step up, and he’s the right guy for the quarterback position,” Gilbert said. “That little play, his knowledge of the game — he’s watching extra film, getting us all ready.”

One important note: The box score says Thompson tossed six incompletions, but three came on drops and another came on a touchdown pass that was ruled out of bounds. In context, he only uncorked two bad passes. One if someone wants to be generous.

“I felt like I managed the game well and took what the defense gave me,” Thompson said. “Never forced anything. Didn’t have any turnovers. Executed our run game.”

Thompson played like he was the guy all night. There was his rushing touchdown in the first quarter, when he took a quarterback draw, juked a guy out of the way and strolled into the end zone.

Then there was the pass early in the second quarter, when Thompson dropped back, couldn’t find anyone, rolled to his right, waited a second, then lasered a pass to receiver Chabastin Taylor. It went for 34 yards, good for a first down on a drive that ended in another K-State touchdown.

Thompson’s one touchdown pass wasn’t impressive insofar as it likely won’t make the end-of-season highlight reel, because receiver Dalton Schoen was wide open, but still: Thompson stepped up in the pocket — confidently — and made the easy play.

“Also, say a receiver drops a ball — he’ll be picking them up because he knows he’s still the guy. He doesn’t have to ride so much on us, you know? I think that’s been good for him. He’s done a phenomenal job.”

Those were the highlights, but mostly, Thompson played mistake-free football.

He was efficient and patient, made the right decisions and didn’t throw any interceptions. His throws were pinpoint accurate with few exceptions.

K-State surely will benefit from similar outings down the line, starting with next week’s home matchup with Bowling Green.

Thompson trailed off for a moment.

Then, he smiled. He offered this: “It was special.”