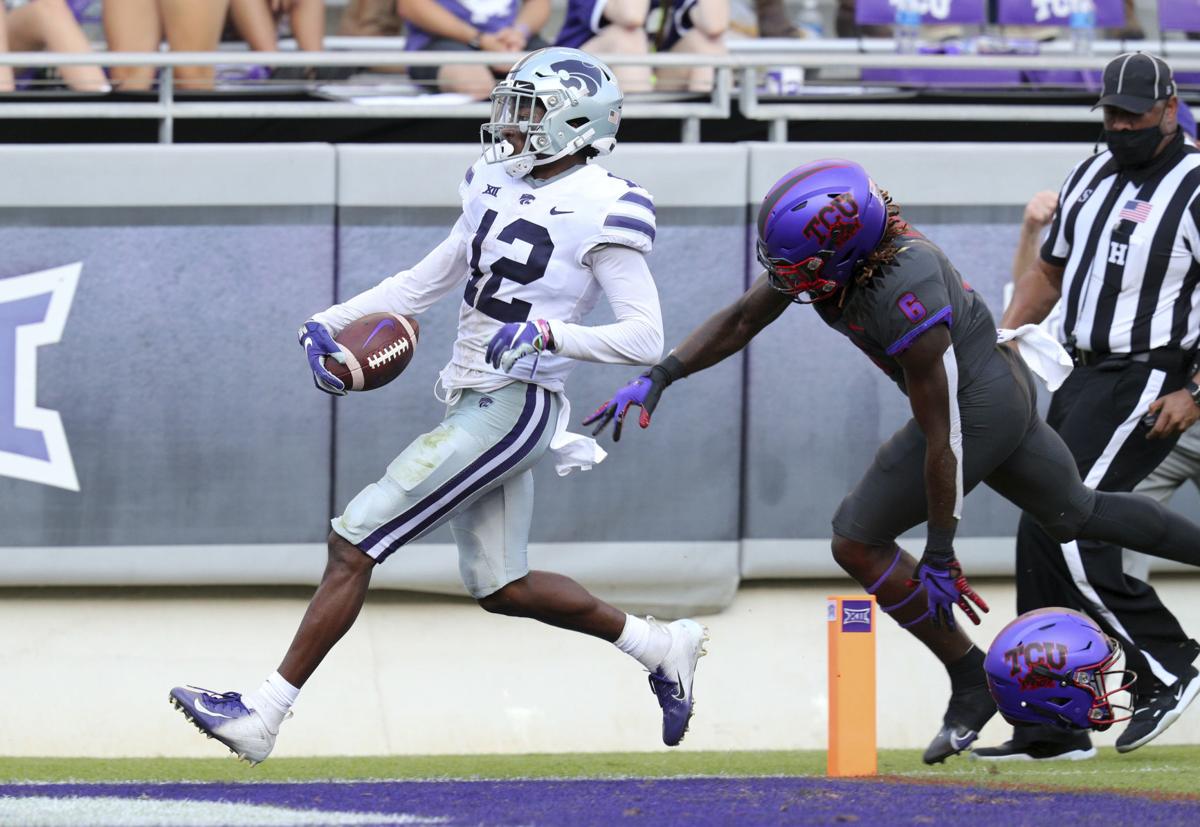 Kansas State defensive back AJ Parker (12) scores on an interception return during the third quarter of Saturday’s game against TCU in Fort Worth, Texas. It marked the only touchdown in the third quarter of a contest dominated by both defense. The Wildcats ultimately walked away with a 21-14 victory, improving to 3-1 overall and 3-0 in Big 12 play. 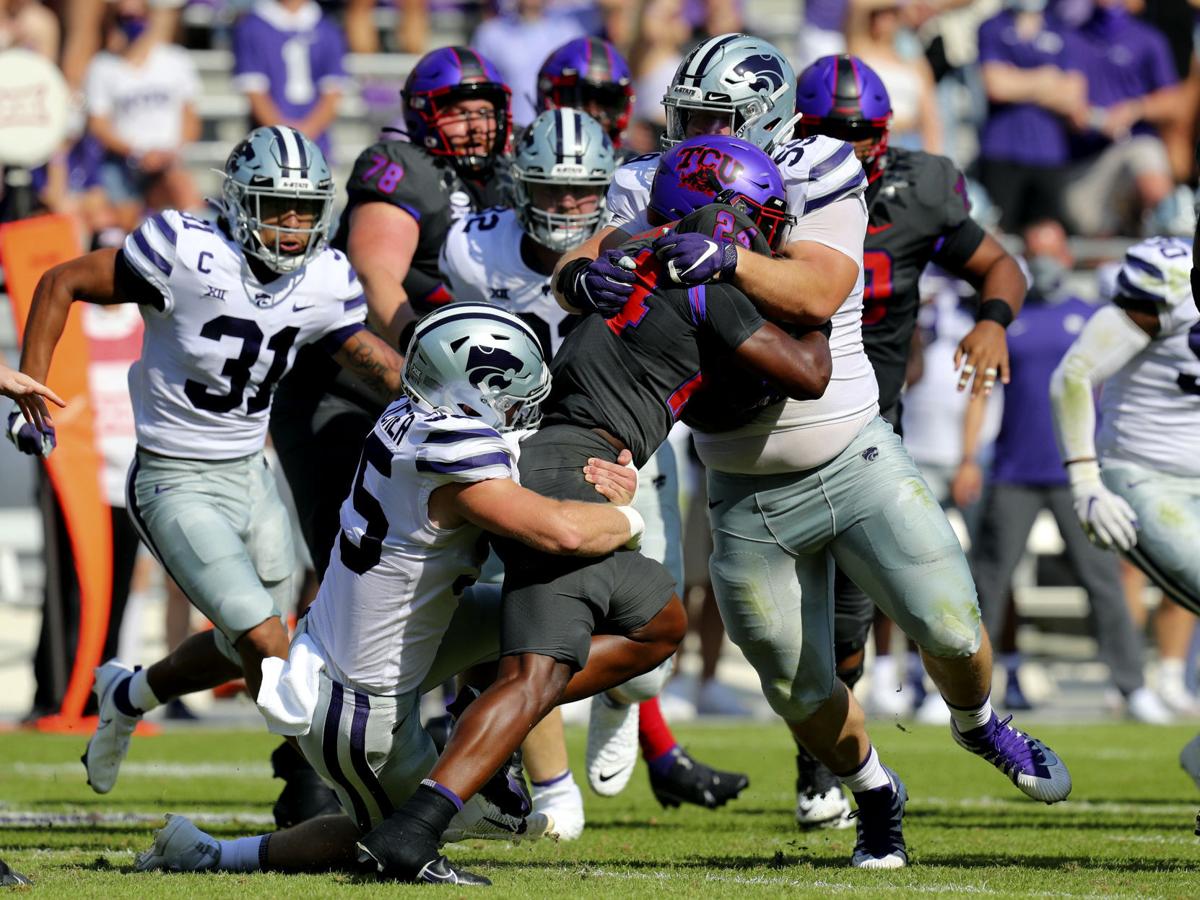 Kansas State linebacker Cody Fletcher (55) and defensive tackle Drew Wiley (59) tackle TCU running back Darwin Barlow (24) in the first quarter of Saturday’s game in Fort Worth, Texas. The Wildcats won 21-14 to improve to 3-1 this season.

Kansas State defensive back AJ Parker (12) scores on an interception return during the third quarter of Saturday’s game against TCU in Fort Worth, Texas. It marked the only touchdown in the third quarter of a contest dominated by both defense. The Wildcats ultimately walked away with a 21-14 victory, improving to 3-1 overall and 3-0 in Big 12 play.

Kansas State linebacker Cody Fletcher (55) and defensive tackle Drew Wiley (59) tackle TCU running back Darwin Barlow (24) in the first quarter of Saturday’s game in Fort Worth, Texas. The Wildcats won 21-14 to improve to 3-1 this season.

FORT WORTH, Texas — One TCU defender had Deuce Vaughn in his sights, ready to drop Kansas State’s phenomenal freshman running back for no gain — perhaps even a loss. But Vaughn sidestepped him. Vaughn then made another defender miss.

When he finally was brought down, he had turned what would have been a forgettable play for the Wildcats’ offense into an 8-yard gain. One play later, he had his longest run of the game: 10 yards.

Those back-to-back runs couldn’t have come at a more pivotal time for K-State.

Up 21-14 with under four minutes remaining, it allowed the Wildcats to chew up valuable clock.

Then, Vaughn and the offense gave way to K-State’s true stars Saturday: the defense and punt-coverage unit.

Leaning on those two areas, the Wildcats were able to hang on for a 21-14 road victory at Amon G. Carter Stadium.

“What a great effort by our guys,” K-State head coach Chris Klieman said. “Total team win. So pleased that we battled through the adversity that we faced.”

For the Wildcats (3-1, 3-0 Big 12), that adversity began with their quarterback situation.

Saturday marked the first career start for K-State quarterback Will Howard. Filling in for injured fifth-year senior Skylar Thompson, Howard completed only 42.1% of his passes (8-for-19) for 117 yards. He had no touchdown passes. He had an interception in the third quarter — K-State’s first turnover of the year after going the first 14 quarters (first three games, plus Saturday’s first half) without giving the ball away.

Yet while Howard battled with accuracy — and wasn’t helped by his receivers dropping passes, including a controversial overturned call on a play that initially was ruled a catch by tight end Sammy Wheeler — his legs were in fine form. On the Wildcats’ opening possession, he broke free for an 80-yard gain on third-and-5, when the visitors were sitting on their own 5.

He also scored K-State’s only offensive touchdown: a 4-yard run in the second quarter, giving the Wildcats a 14-7 lead at halftime following a successful two-point conversion on an end-around to receiver Chabastin Taylor. Howard finished as the game’s top rusher, with 86 yards on 13 carries.

“I thought Will did a great job and managed the game exceptionally well,” Klieman said, “and did enough for us to be successful.”

With Howard getting his bearings, K-State’s defense and special teams stepped to the fore.

The Horned Frogs (1-2, 1-2) scored just two touchdowns: a 7-yard run in the first quarter by Darwin Barlow and a 3-yard score from Max Duggan on a fourth-and-goal try in the final period, cutting the Wildcats’ lead to 21-14 with 3:39 to play.

The Horned Frogs had one last possession to try to tie the game, taking over at their own 4-yard line with 1:05 remaining.

TCU eventually got past midfield, and had an untimed down to end the game after a roughing-the-passer penalty on Wildcat defensive end Wyatt Hubert on the final play of regulation.

Duggan’s last-gasp throw to the end zone was knocked down, however, allowing K-State to escape with a seven-point win.

For a pair of defensive purists like Klieman and TCU head coach Gary Patterson, Saturday was a masterpiece.

Neither team recorded a double-digit point total in any quarter; the most was eight, by the Wildcats in the second. It was a far cry from TCU’s output last week, when they scored at least 10 points in three separate quarters in a 33-31 win over Texas.

Heck, the only scoring play of the third period came on defense.

K-State defensive back AJ Parker picked off Matthew Downing — on the field in place of Duggan, TCU’s starting quarterback — and returned it 38 yards for a touchdown. After Blake Lynch’s successful extra point, the Wildcats led 21-7 at the 4:51 mark of the third quarter.

Klieman couldn’t be happier that his defense took center stage — and he expects more battles like this as the season progresses.

TCU linebacker Garret Wallow, who posted game highs in both tackles (10) and tackles for loss (two) tipped his cap to K-State.

“Kansas State played a really good game. They are a really good team,” he said. “They came in with a second-string quarterback and won the game.”

The Horned Frogs lost despite outgaining the Wildcats 342-289. And they lost despite keeping Vaughn, relatively, in check. The Big 12 Freshman of the Week honoree each of the last two weeks, Vaughn entered Saturday averaging more than 146 all-purpose yards per game, the 10th-best mark nationally.

He tallied just 88 (43 rushing, 45 receiving, with the latter total all coming via one second-quarter reception) against TCU.

Still, Klieman was pleased how Vaughn handled the increased scrutiny.

“I was happy for Deuce, because he had to play a grind-it-out, big-time Big 12 football game,” Klieman said. “He did a great job. He was able to get a lot of tough yards. That’s a tremendous, tremendous defense that we just faced today, and it wasn’t perfect by any means, but it was good enough to win and be able to continue to learn and get better from.”

Besides, when K-State’s offense sputtered, punters Ty Zentner and Jack Blumer made life difficult for the hosts. Both averaged more than 40 yards per attempt, Zentner at 47.3, Blumer at 42 on the nose. Zentner had a 65-yarder in the third quarter that pinned the Horned Frogs at their own 8-yard line, after it took a fortuitous bounce and skittered forward and out of bounds, preventing a return.

He had an even more important kick in the fourth: The Wildcats downed his punt at the 4-yard line on the game’s final drive, pushing the hosts back into the shadow of their own end zone and forcing them to try to drive 96 yards to tie the game with barely a minute left.

“I thought we punted the ball really well. We did a great job in coverage,” Klieman said. “We talked about the return specialists that they have and that they weren’t a team that was going to go for blocks; they were going to try to get returns. ... We were able to get off some coverage things and get down there and force some fair catches, and that was really important. We won that battle.”

K-State also won the ongoing battle with its many, many doubters.

The Wildcats were picked to finish seventh in the Big 12 in the conference’s preseason poll. They were four-touchdown underdogs against then-No. 3 Oklahoma last month. And Saturday, with Thompson unavailable and a freshman starting at quarterback for the first time, many thought Patterson — a defensive wizard whose unit has led the league in total defense each of the past three seasons — would give Howard and the K-State offense fits. To wit: Every picker on ESPN’s College Gameday show, five in all, predicted a TCU victory Saturday.

Without naming any specific skeptic, Klieman made his point.

“I couldn’t be happier with the resolve of a bunch of guys who came in here when nobody expected us to be successful except for the guys in that locker room,” he said. “It’s a credit to our leaders and it’s a credit to our coaches for a great effort today.”