During last season’s Sunflower Showdown between Kansas State and Kansas, 50,062 fans crowded into Bill Snyder Family Stadium to watch. As K-State enters Year 1 under new head coach Chris Klieman, it is battling a problem nearly every school across the nation is facing to varying degrees: a downward trend in season ticket sales. 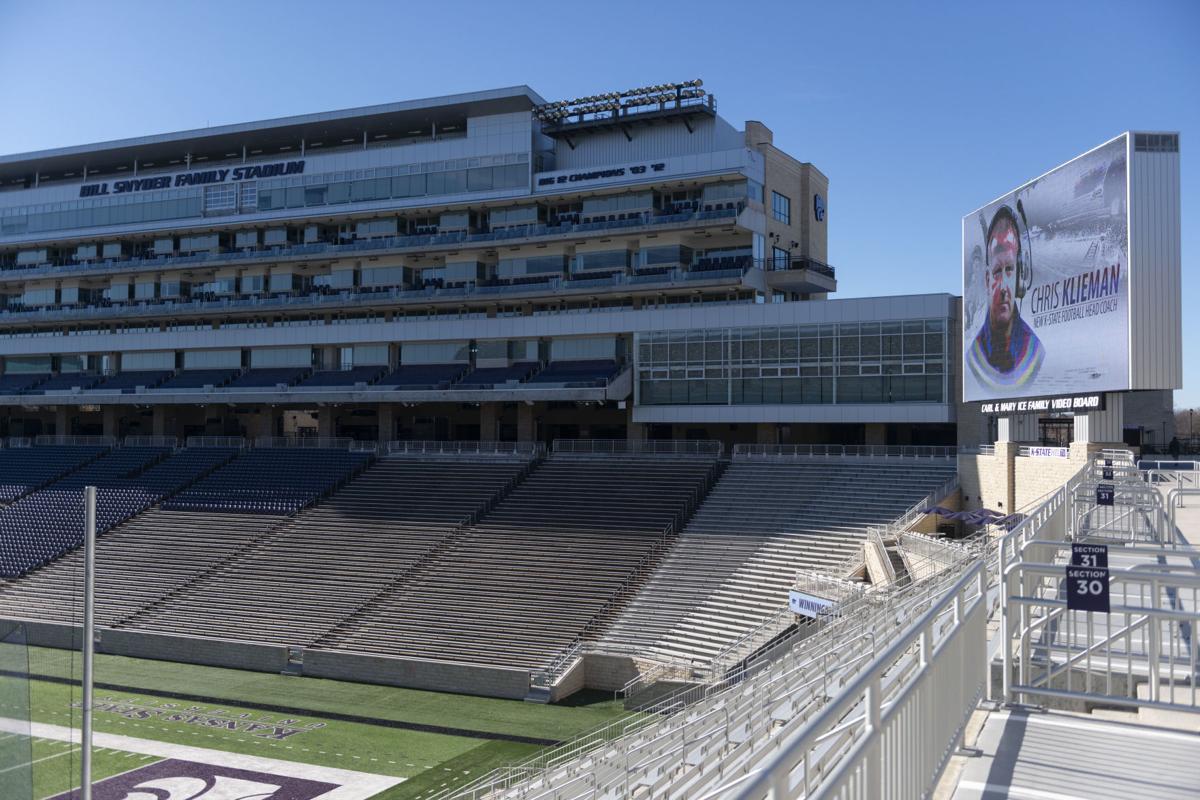 Kansas State head football coach Chris Klieman appears on the video board at Bill Snyder Family Stadium after his hire in December. Klieman will coach his first official game at the stadium Saturday against Nicholls State. The Wildcats are close to selling out their home opener for the 11th year in a row, with less than 250 tickets remaining as of Friday.

During last season’s Sunflower Showdown between Kansas State and Kansas, 50,062 fans crowded into Bill Snyder Family Stadium to watch. As K-State enters Year 1 under new head coach Chris Klieman, it is battling a problem nearly every school across the nation is facing to varying degrees: a downward trend in season ticket sales.

Kansas State head football coach Chris Klieman appears on the video board at Bill Snyder Family Stadium after his hire in December. Klieman will coach his first official game at the stadium Saturday against Nicholls State. The Wildcats are close to selling out their home opener for the 11th year in a row, with less than 250 tickets remaining as of Friday.

The downward trend isn’t a concern to K-State athletics director Gene Taylor. It is, however, a situation the athletics department is monitoring.

“I would caution people not to read too much into one particular piece of the ticket sales,” Taylor told The Mercury. “There’s a lot that goes into it and we just have to make sure we’re doing everything we can from a fan’s perspective to entice them to come to the stadium as opposed to sitting at home and watching it on TV.”

It’s a predicament nearly every school across the country is battling to a degree.

Average attendance at FBS college football games has declined in seven of the last eight years. In 2018, an average of 41,856 fans attended FBS games, the fewest since 1996. And per CBS Sports, of the top 30 schools in 2017 attendance, 20 remained the same or declined last year.

“We just came back from a Big 12 meeting and that’s basically what we talked about,” Taylor said. “I think there’s maybe one school that is either up or equal to where they were last year. As long as we’re selling (tickets) in one shape or form, that’s my ultimate concern. It looks like we’ll sell out the first game, and from there, we’ll see.”

One concerned the opener alluded to by Taylor: less than 250 scattered singles and a limited number of standing-room only tickets are available for the contest against Nicholls State, which will be the first game of the Chris Klieman era. K-State has sold out its home opener each of the past 10 years. The other release involved a “Back to Campus Day” offer available Monday.

As part of the campaign, fans can purchase tickets with no fees on the first day of the fall semester. In addition to the no-fee incentive, fans also can purchase “one-day-only” tickets, ranging from a “Pick 6” football package, a “Wildcat 4 Pack” (involving four Big 12 football home games) and pre-sale tickets for men’s basketball games against Marquette and the Wildcat Classic, which pits K-State against Saint Louis in Kansas City, Missouri.

Those are just two of a myriad of ways K-State is trying to encourage more fans to attend games. And to assist in coming up with improvements, Taylor said the athletics department relies on end-of-the-year surveys that go out to season ticket holders.

“We get a lot of feedback that our staff then takes and figures out, ‘OK, what can we improve? What can we change? What are we missing?’” he said. “Then they start working on it pretty much from the end of football season until the next football season. It’s constantly continuing to try to make our fan experience as good as we can make it.”

A number of football gameday initiatives K-State tabbed “improvements” were revealed earlier this month. Among them were concession stand discount cards and an expanded beverage menu. Taylor pointed to two as the potential highlights: the ability for fans to vote on pregame music via a newly created app and updated metal detectors, which will allow spectators to pass through without removing items in their pockets, including their keys and cell phones.

“We have the best parking in America in terms of access to the stadium and being able to get people from the parking lot into the stadium,” he said. “So it’s a little thing, but it’s kind of a big thing, that we’ve adjusted our metal detectors so people can get in faster. As many times as we tell people to get here early, they wait and wait and wait and crush our gates 10, 15 minutes before kickoff. So again, it’s another adjustment to get people through. The more people we can have in the stands for kickoff, the better for everybody.”

In terms of a total sales goal for season tickets, Taylor said he never “puts a number” on it. Of those sold to this point, Taylor said every premium area — the suites and club seats — is filled. Most other prime seating is sold out, too.

“So what you’re seeing is a picky ticket holder who sits in one of the end zones — season tickets and the general admission tickets in the corners — who decided to say, ‘You know what? Let’s buy game by game or (take advantage) of different packages,” he said. “Then we need to kind of figure out how to keep reaching those folks.”

One way to do that, Taylor said, is by getting a handle on the secondary market. It’s far from new, but Taylor noted as years go by, more and more people learn that they don’t have to purchase tickets directly from the school; they can go to an online seller, such as StubHub, and potentially buy them at a cheaper price.

“We’re doing a lot of different stuff just to be competitive out there,” Taylor said. “I think that’s the other thing: I think the secondary market ... drives a lot of stuff as well. So we’re still learning and adjusting where we can. We’re just watching it and figuring out how to be effective in the ticket-buying game.”

Taylor made a point of noting one factor outsiders may believe looms largely on ticket sales in fact has played little-to-no role: the retirement of longtime head coach Bill Snyder. Even before he retired — making way for Klieman, who won four FCS national championships in five seasons at North Dakota State — Taylor said K-State’s season tickets were “trending down.”

Still, Taylor couldn’t rule out there likely is a faction of Snyder loyalists who haven’t been willing to part with their money — yet.

“Obviously there is some loyalty to Coach (Snyder), and there are probably some people who did decide to take a wait-and-see attitude with (Klieman),” Taylor said. “But there are so many other factors. The ticket-buying market is different. ... There are just so many things that go into it, at the end of the day, it’s, ‘What we can do to put 50-plus thousand fans in the seats here week in and week out?’ I think last year was the first time we didn’t sell out every game. So there’s a trend across the country. It’s not just here.”

It even pops up in conversations with Taylor’s colleagues. Taylor said he spoke with an unnamed friend about the upcoming season. The friend, who works at a much larger school with a stadium capacity greatly exceeding that of Bill Snyder Family Stadium, told Taylor they “used to sell out all the time.” Now, with seven home games on the docket this fall, Taylor’s friend told him they’re hoping they can manage two sellouts.

It’s that thought process Taylor believes will be at the forefront of every stadium renovation in the years to come.

“As people redo stadiums, they’re looking at their capacity, they’re looking at entertainment areas to build into the renovation and that’s just where this is kind of heading,” Taylor said. “And again, inside the stadium, things like videos boards and sound systems and Internet and bandwidth, all of those things are critically important for the fan base.”

“If we come back from Mississippi State 3-0, the ticket-buying market probably will change,” Taylor said. “I think there’s a lot of cautious optimism and excitement out there about watching Chris Klieman coach the team, just to see what it’s going to be like.”

In the meantime, Taylor and his staff will continue doing everything they can stem the tide of declining attendance — and, in an ideal world for the Wildcats, reverse it.

“It’s so easy to sit at home and watch multiple games in front of your 60-inch HD television,” Taylor said, “so we have to do everything we can to make sure that they want to come and experience a game in the stadium.”