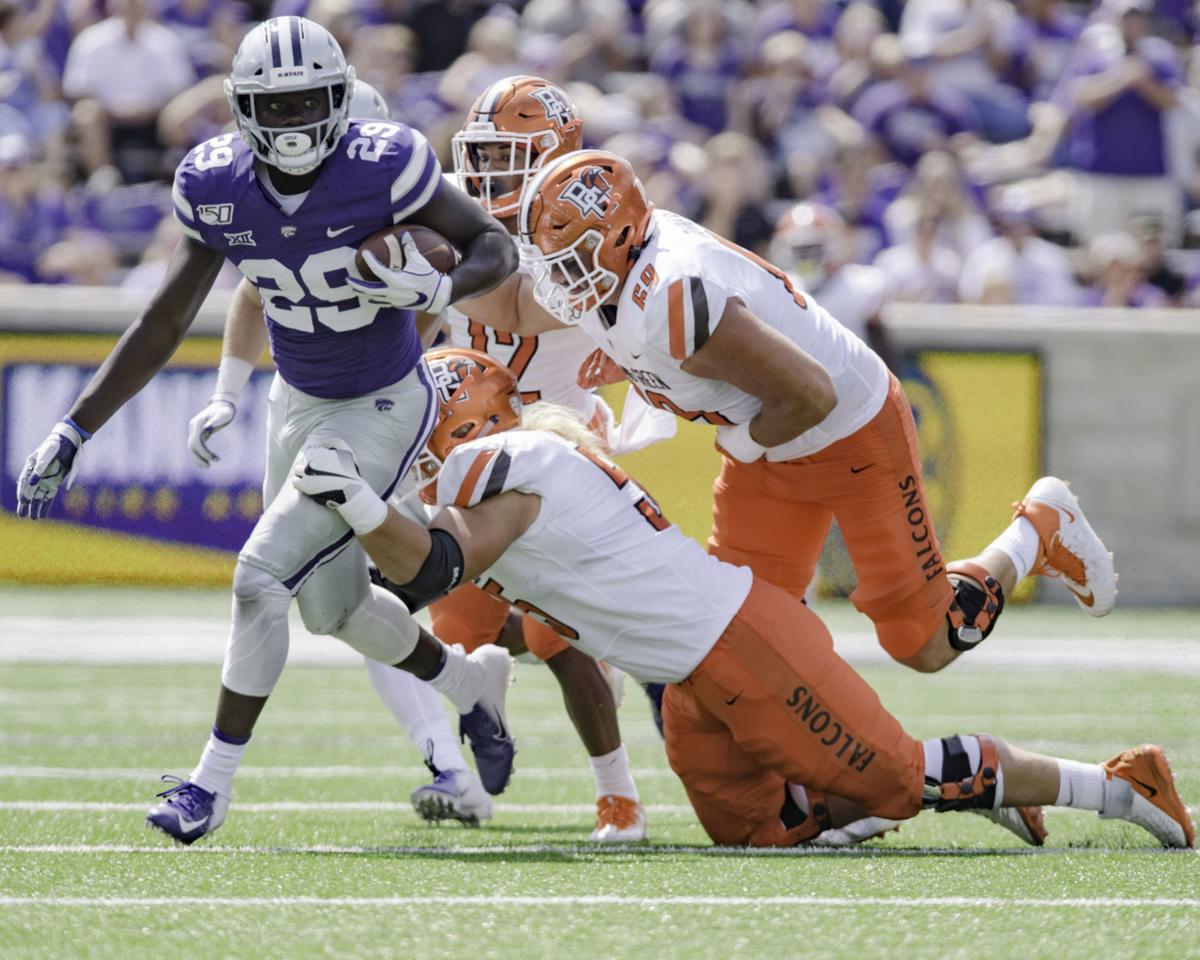 Kansas State linebacker Khalid Duke runs with the ball after picking up a fumble by Bowling Green quarterback Darius Wade. 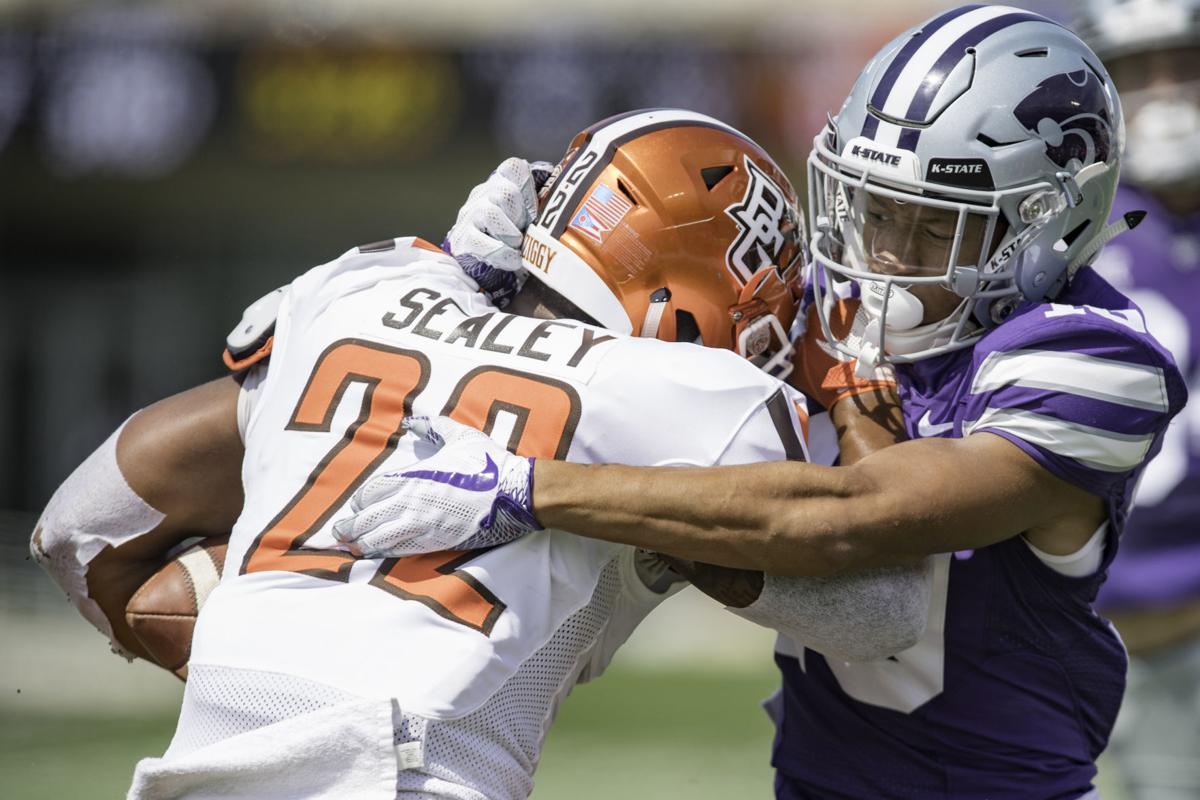 Kansas State linebacker Khalid Duke runs with the ball after picking up a fumble by Bowling Green quarterback Darius Wade.

Kansas State’s defense never really was in danger of letting Bowling Green back into things over the course of a 52-0 win Saturday afternoon — just look at the score — but even at the slightest hint, the Wildcats slammed the door.

The setting was early in the third quarter, when K-State return man Phillip Brooks muffed the first of two punts he dropped in the win. It turned possession back over to Bowling Green at K-State’s 33-yard line.

Then, disaster for the visitors.

Suddenly, in the blink of an eye, the Wildcats had turned one of the few offensive chances they provided the Falcons into mush, stamping out any hope the visitors may have allowed themselves.

“We were talking on the sideline, like, ‘We do want that goose egg,’” K-State defensive end Reggie Walker said. “Keeping that goose egg on the board, it’s like a statement. For teams to see that — ‘Man, their defense is out there handling their business, no matter what team it is,’ you know? You’re playing college football.”

The story was in the numbers. K-State held Bowling Green to just 140 total yards, 79 passing and 61 rushing. Falcon quarterback Darius Wade completed just 8 of 19 passes for 79 yards, and if the Wildcats had taken advantage of a few tipped passes, they could have come up with an interception or two.

Consider this, too: K-State didn’t let Bowling Green convert a single one of its 11 third-down chances. The Falcons went 0-for-2 on fourth down. In fact, the visitors only ran 44 plays, a sign the Wildcats’ defense got off the field at nearly every opportunity.

It was domination from cover-to-cover, in other words, the type that was important for the Wildcats’ defense to keep up. Ask the players themselves, and they’ll tell you that pitching a shutout — the program’s first in four years — was a point of pride.

“Every time they got down on our side of the field or something, I was like, ‘We can’t have any points on the board,’” K-State defensive tackle Trey Dishon said. “That’s what I was focused on at halftime, telling the guys, ‘Let’s continue to pound. Let’s continue to shut them out.”

That, perhaps, begs the question: When did K-State begin taking that approach?

“From the start,” Dishon said. “You don’t want to go in thinking anything else.”

In a couple ways, this defensive outing can be difficult to analyze on an individual level. Not long into the second half, K-State’s starters were removed for the second- and third-stringers. Backups like Eric Gallon, Brock Monty, Darreyl Patterson and Daniel Green all saw playing time.

Still, K-State’s defense is off to a blazing start to the season: 14 points against Nicholls in Week 1. Zero against Bowling Green in Week 2. In total, three takeaways. With the help of their offense, the Wildcats have outscored their two opponents by a combined score of 101-14.

There are two catches to this: One is that K-State hasn’t been on the field very much, in Week 1 or Week 2. It’s because they’ve played so well, and the Wildcats denied the idea of the inexperience having any negative impact, but still: they simply haven’t played as much as other defenses, for better or worse.

The other side: Things won’t get any easier moving forward. Next Saturday, K-State goes on the road for the first time this season, facing Mississippi State. That’s notable, one because it’s a road test against an SEC foe, but also because former K-State wide receiver Isaiah Zuber now is a Bulldog.

In any case, it’s the next game.

K-State’s defense will try to post another solid effort.

“We kind of prepare the same way for every team,” Sullivan said, “but at the end of the day, we know, as a defense, we need to come out better in the second half. That’s what we focused on this week.”

Coming off the highs of last week, Kansas State was due for a letdown. After playing nearly perfect, mistake-free football against Nicholls in…