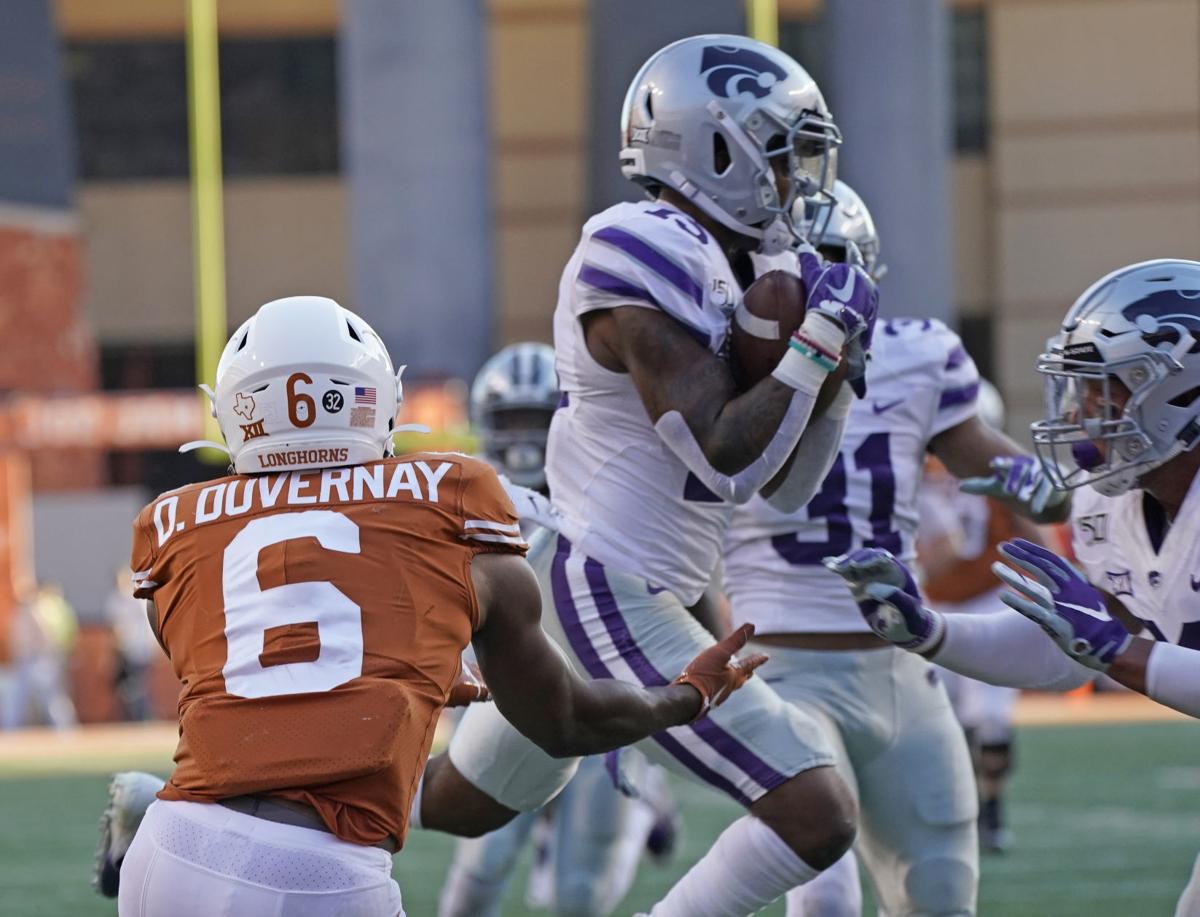 Kansas State’s Walter Neil Jr. (15) intercepts a pass intended for Texas’ Devin Duvernay (6) during the second half of Saturday’s game in Austin, Texas. Neil said he dedicated the game to his injured roommate AJ Parker, who fractured his ankle in last week’s win at Kansas. 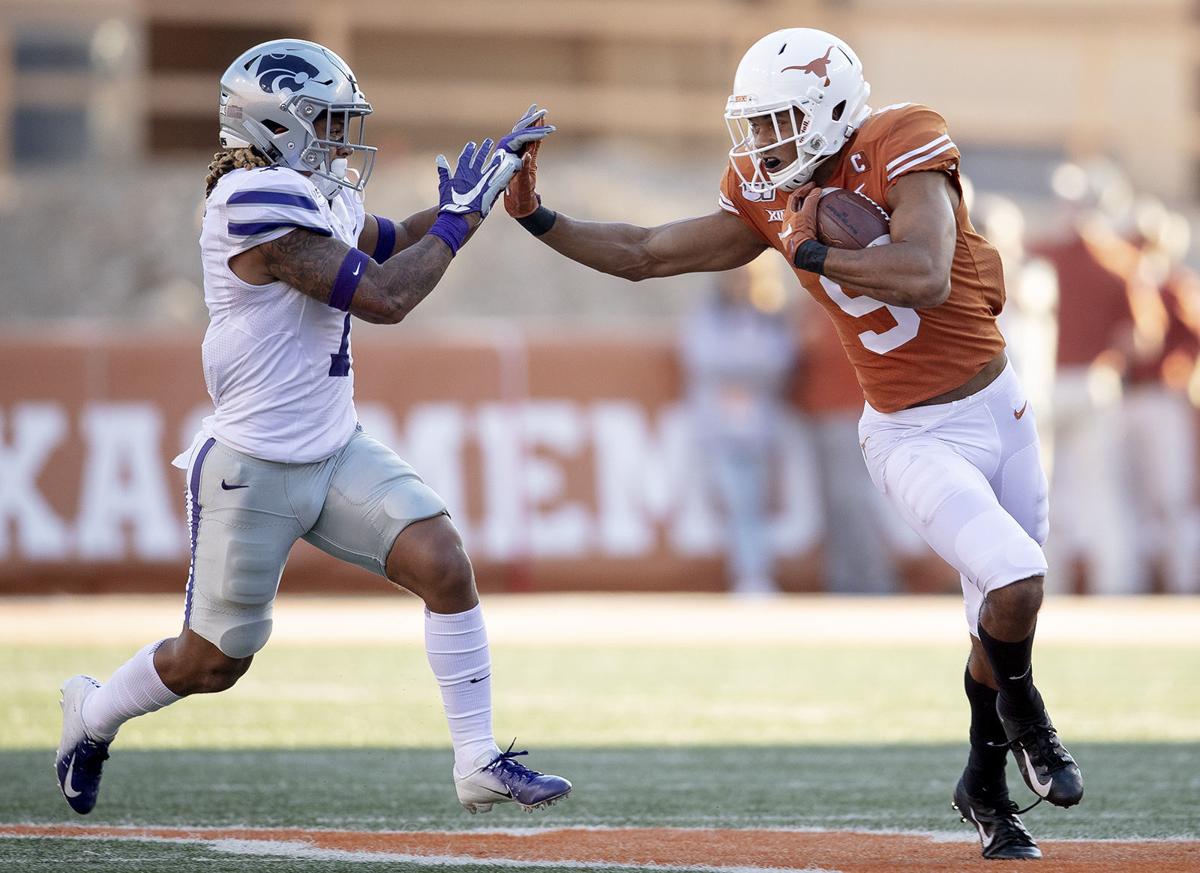 Kansas State’s Walter Neil Jr. (15) intercepts a pass intended for Texas’ Devin Duvernay (6) during the second half of Saturday’s game in Austin, Texas. Neil said he dedicated the game to his injured roommate AJ Parker, who fractured his ankle in last week’s win at Kansas.

AUSTIN, Texas — If an outsider stopped by Walter Neil Jr. and AJ Parker’s room this week, they likely wouldn’t notice anything amiss. The Kansas State cornerbacks, who are roommates, practiced their same weekly routine: watching film of their upcoming opponent — “chopping it up,” Neil calls it.

There was something different, though. This week, and for the foreseeable future, Parker shared his thoughts knowing he wouldn’t be able to go out and put his knowledge to use, a fractured ankle to blame.

So Neil made Parker a promise.

That play came during the third quarter of Saturday’s game at Texas. With the Longhorns driving toward what appeared to be its third score in as many drives, Neil picked off quarterback Sam Ehlinger on a pass intended for star receiver Devin Duvernay. While Neil physically caught the ball, he said it wouldn’t have happened if not for a “great play call” by K-State defensive coordinator Scottie Hazelton.

The exact play Texas ran, Neil said, was one Hazelton specifically pointed out during film review in the leadup to Saturday.

Prior to the snap, Neil noticed Duvernay in the slot — “and he’s their go-to receiver in the slot,” Neil said.

In this particular coverage, Neil is responsible for a slot receiver who runs a deep route. Everything unfolded according to plan from there.

“As the play developed, I saw (Duvernay) sprinting right down the middle of the field. I knew it looked open, so I kind of baited him,” said Neil, “him” being Ehlinger. “I kind of sat outside and made it look open so he would kind of float (the pass) over the nickel, which he did. By the time the ball got there, I was able to grab it.”

Paying close attention to Duvernay went without saying. Entering Saturday, he had 69 receptions for 800 yards this season, more than double any other receiver on Texas’ roster. While he had another stout performance — catching a game-high nine passes and tying another game high with 110 yards — Neil said the Wildcats were well aware of Collin Johnson, too.

“He’s a captain. He’s definitely (been a) go-to receiver,” Neil said. “It’s just that this year, Duvernay was the one making the big plays. So of course we knew, just being a wide receiver, Johnson would catch a couple passes. We wanted those to be limited. We didn’t want those to be like other teams we watched, where he just runs straight and they just throw it to a 6-6 receiver.”

Johnson did snag the Longhorns’ lone receiving touchdown Saturday: on a flea flicker in the second quarter. Take that away, Neil said, and he believes K-State’s cornerbacks did well. (Though Neil pointed out he won’t know for sure until he watches the film with Van Malone, his position coach.) Even so, Neil also wanted observers to look deeper into Ehlinger’s final passing line: 22-for-29, 263 yards, one touchdown against one interception.

“Of course people will look at the stat sheet and say, ‘Oh, he only had seven incompletions,’” Neil said. “But if you sat down and watched the game, you realize, besides that one flea flicker, most of (the completions) were quick outs, comebacks, things like that.”

K-State head coach Chris Klieman had few complaints about the corners, either.

“I was proud of ‘Kevi’ (Kevion McGee) and Walt,” Klieman said. “I think they went most of the way. ... I thought they battled against some really good receivers. Johnson and Duvernay are excellent receivers. The run-pass option, when the quarterback is running it like he is, they can just beat you so many ways. So I thought our guys battled.”

Defensive end Wyatt Hubert echoed Klieman, deeming the play of the cornerbacks “good,” especially given the reality of the situation: Not a single K-State corner is taller than 5-foot-11 — and that’s Parker, who is out. Texas, on the other hand, boasts three receivers on its depth chart who are 6-foot-4 (or taller), along with three tight ends who stand 6-foot-4 and above.

“So they’re a little mismatched, going against 6-foot-5, 6-foot-6 receivers, which is definitely tough,” Hubert said. “But there weren’t that many big catches or long, long plays from their receivers. So I think our corners really held their own and did a great job.”

Hubert was frustrated that his unit didn’t do the cornerbacks any favors. Because of Ehlinger’s excellence on run-pass option plays, pressure was hard to come by. K-State notched just two sacks, and didn’t record a quarterback hurry.

“We had problems stopping the RPO zone, with the slants from the receivers on the inside,” Hubert said. “It’s tough for the defensive linemen to get pressure on the quarterback on that (type of) play, just because we’re playing our run fits first. Then it’s a little late to transition back to pass rush. It’s definitely puts the corners in man to man (coverage), which is tough.”

Having Parker around would have helped. Instead, the Wildcats made do without his team-leading three interceptions and veteran leadership, which he had displayed in 20 consecutive starts before that streak came to a painful — in a literal sense, for Parker — end Saturday.

“Of course we want AJ (to play),” Neil said. “That’s a lot of experience, a lot of plays. But for the most part, I feel like we have a good defensive back corps. We knew we were missing a big piece, so we had to play even better.”