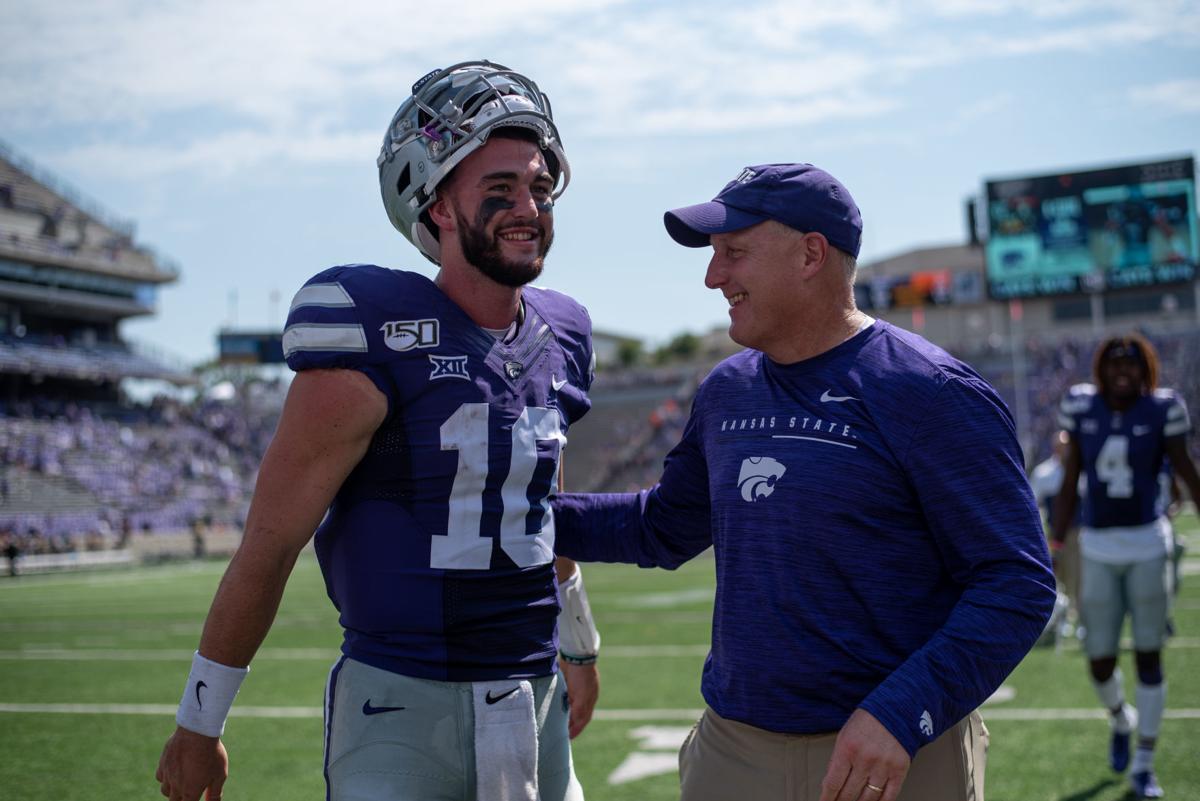 Kansas State quarterback Skylar Thompson (10) and head coach Chris Klieman share a moment after their victory against Bowling Green at Bill Snyder Family Stadium on Sept. 7. The final score of the game was 52-0. 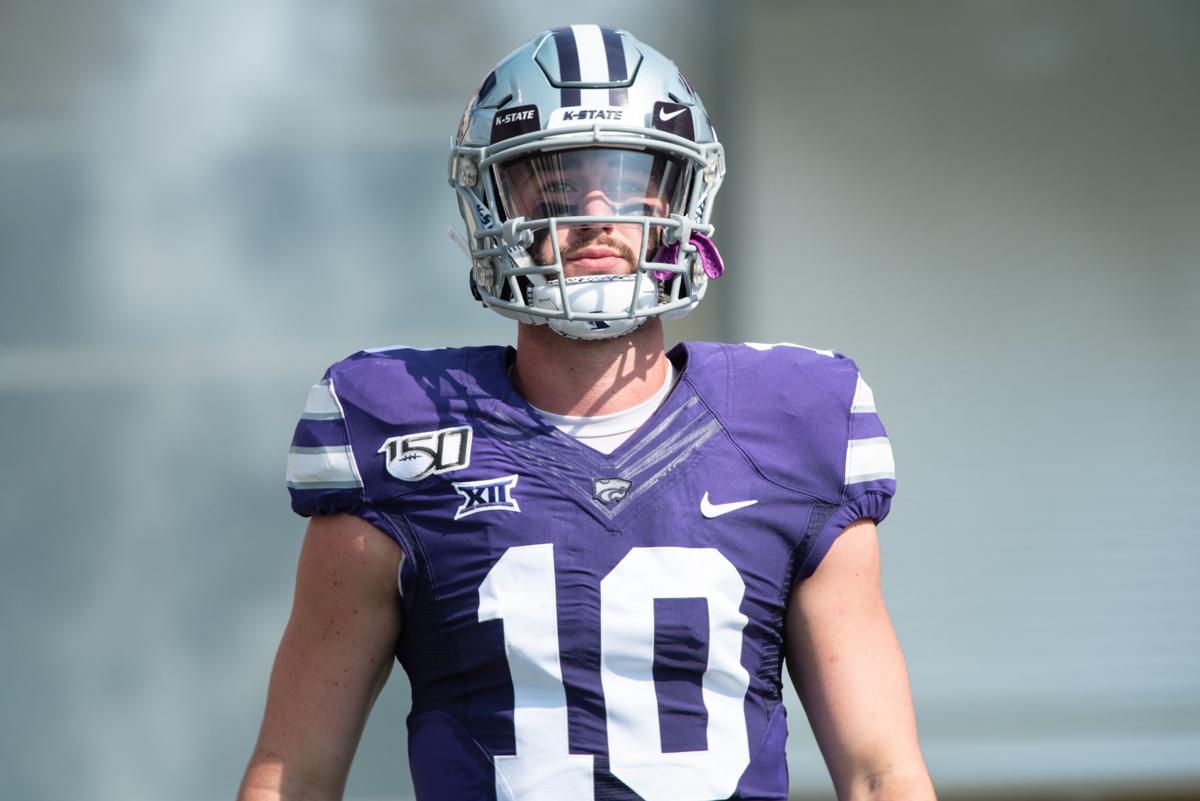 K-State quarterback Skylar Thompson (10) walks onto the field before the game against Bowling Green on Sept. 7. Because of first-year head coach Chris Klieman’s bye-week policy, Thompson will head home this weekend. It’s the first time he’s visited his family during the fall since 2016.

Kansas State quarterback Skylar Thompson (10) and head coach Chris Klieman share a moment after their victory against Bowling Green at Bill Snyder Family Stadium on Sept. 7. The final score of the game was 52-0.

K-State quarterback Skylar Thompson (10) walks onto the field before the game against Bowling Green on Sept. 7. Because of first-year head coach Chris Klieman’s bye-week policy, Thompson will head home this weekend. It’s the first time he’s visited his family during the fall since 2016.

Coming off the highs of last week, Kansas State was due for a letdown. After playing nearly perfect, mistake-free football against Nicholls in a 49-14 victory — the first game of Chris Klieman’s tenure as K-State head coach — it didn’t seem likely the Wildcats could duplicate that performance Sept 7.

K-State dominated both offensively and defensively, blasting Bowling Green 52-0 at Bill Snyder Family Stadium for its first shutout in more than four years.

“I just thought the emotion and the energy the guys played with today is what we were looking for,” Klieman, whose team improved to 2-0, said during his postgame press conference. “I told the guys in the locker room that’s a credit to our upperclassmen, a credit to our captains and leadership, that they had the guys ready to play. That was a fun environment out there for the guys.”

Though Klieman became the seventh K-State coach to win his first two games, he made history of his own against the Falcons: The Wildcats finished with 521 yards of total offense. Coupled with the 573 yards K-State racked up last week, it marked the first time in the Wildcats’ storied annals they had back-to-back games of 500-plus yards to start a season.

Helping to set an offensive record, given the talent K-State has boasted over the years — from Michael Bishop to Darren Sproles to Tyler Lockett, just to name a few — humbled starting quarterback Skylar Thompson.

“It’s really cool to be a part of,” said Thompson, who finished 10 of 13 for 151 yards and two touchdowns. “I think it just shows the potential of what we can do, and how we’ve barely scratched the surface. I think I threw the ball 13 times today, played a half. So we know we’re going to have to play a full game against Mississippi State and probably the rest of the year, so we’re just scratching the surface. We’ve just got to keep going and can’t get complacent.”

That the Wildcats once again moved the ball and scored seemingly at will isn’t by chance, Thompson said. It’s because of an offensive line that makes his job, and that of K-State’s skill position players, easy. And Thompson said the line didn’t deserve only part of the praise; the linemen deserved “all” the credit.

“Our O-line is doing a great job, working tremendously hard,” he said. “They play together. They’re so physical. They’re all seniors along with (Josh) Rivas in there, so that’s the reason why we’ve had so much success the past two weeks.”

The offense’s efficiency was matched only by the defense’s stinginess. Prior to Saturday, the last time K-State held an opponent scoreless was Sept. 15, 2015, when it beat South Dakota 34-0 in the opener for both teams. The Wildcats pitched a first-half shutout against the Colonels last week before the FCS foe punched in two touchdowns after halftime.

The Wildcats weren’t so accommodating to the Falcons.

Bowling Green (1-1) only advanced past midfield three times Saturday. One of those came after Phillip Brooks muffed a punt, giving the visitors the ball 22 yards away from K-State’s end zone. One play later, the ball was back in the Wildcats’ hands after forcing a fumble from Falcon quarterback Darius Wade.

It was that type of day for the Bowling Green offense, which looked nothing like the unit that put up 46 points on Morgan State in Week 1.

Wade was the Mid-American Conference East Division’s Offensive Player of the Week after totaling 295 yards and three touchdowns against Morgan State in his debut as the starter. In his second career start for the Falcons, the Wildcats made him look like a player making his second career start. He went 8-for-19 for 79 yards, adding no rushing yards on three carries.

The rest of the Falcons didn’t fare much better, totaling just 140 yards — the fewest yards the Wildcats have permitted since Eastern Kentucky gained just 129 (119 passing, 10 rushing) on Sept. 3, 2011.

Despite the scant yardage, K-State’s defenders were focused on another number: zero. The only K-State players still on the roster from that last shutout four years ago redshirted in 2015. It’s a list that includes just five players: defensive linemen Reggie Walker and Trey Dishon and defensive back Denzel Goolsby, along with the injured pair of linebacker Justin Hughes and defensive back Johnathan Durham.

Walker, Dishon and Goolsby are starters now, and hadn’t tasted shutting out another opponent since that day just more than four years ago.

“I think that’s big every time we have a goose egg,” said Dishon, who didn’t record a tackle but was credited with two quarterback hurries. “You know when they get on our side of the field, those turnovers are big. I remember telling those guys, like ‘Hey, we’re keeping points off the board. That’s big.’”

Saturday’s lopsided affair followed a similar rhythm to last week, as the visitors won the coin toss and deferred. Last week, the Wildcats marched down the field and scored a touchdown on the opening possession. This time, Bowling Green managed to hold K-State to a field goal.

But it’s the only time the Falcons accomplished that feat.

The Wildcats scored on five of their next six possessions to end the first half; the one time they didn’t, they let the clock run expire as they ran into the locker room.

In between that field goal and the close of the second quarter, the Wildcats crossed the goal line five times. It included four scores on the ground (two from starting running back James Gilbert and one apiece from Harry Trotter and Jordon Brown) to go along with a fourth-down strike from Thompson to redshirt freshman wideout Malik Knowles.

All told, the Wildcats topped the 300-yard mark on the ground for the second consecutive week, split between a whopping nine players. Just as last week, Gilbert led the way with 103 yards on eight carries. It was nearly one-third of K-State’s 333 rushing yards against an overmatched opponent.

Brown started off the scoring with a 50-yard run, making one tackler miss on his way into the end zone at the 5:57 mark of the opening period. Gilbert followed with a 17-yard touchdown, which saw him take a handoff, squeeze through a hole in the middle and dash across the goal line.

On the ensuing kickoff, the Falcons misplayed the ball, which Wildcat wide receiver Landry Weber recovered. K-State capitalized on the mistake, with Trotter walking in from the 1-yard line untouched. Gilbert got back in the end zone one more time on the next possession.

After spinning out of a dogpile near midfield, Gilbert picked up 51 yards before he was knocked out at the 5-yard line.

One play later, he had his second touchdown of the day.

After the break, the Wildcats added two more touchdowns.

The first was another from Knowles, a play in which he had to contort his body to haul in the 20-yard score with Bowling Green cornerback JaJuan Hudson draped all over him. Following his second scoring toss to Knowles, Thompson took a seat on the bench.

The second (and final score) of the second half doubled as a first of a different kind: the first career touchdown for true freshman running back Joe Ervin, who ran it in from 6 yards out with 9:45 remaining, to put a capper on the 52-point triumph.

Saturday was the largest margin of victory in a shutout since K-State annihilated Kansas 64-0 in the 2002 Sunflower Showdown. Combined with last week’s output, and the Wildcats have outscored their first two foes 101-14.

But as K-State prepares for the first road trip of the Klieman era next week — against a Mississippi State team that manhandled the Wildcats 31-10 last season, and which now is the home of Isaiah Zuber, who led K-State team in nearly every major receiving category in 2018 — the head coach didn’t lose sight of the bigger picture. His team still can improve. Players, he said, must have that same mindset.

If they want to keep winning, that is.

“You win two games pretty handily, you better not fall in love with yourself,” Klieman said. “You better keep striving to be better in all phases: offense, defense and special teams. ... We talk about it all the time: stack great day upon great day, Monday through Friday, to give yourself a chance to be successful on Saturday.”