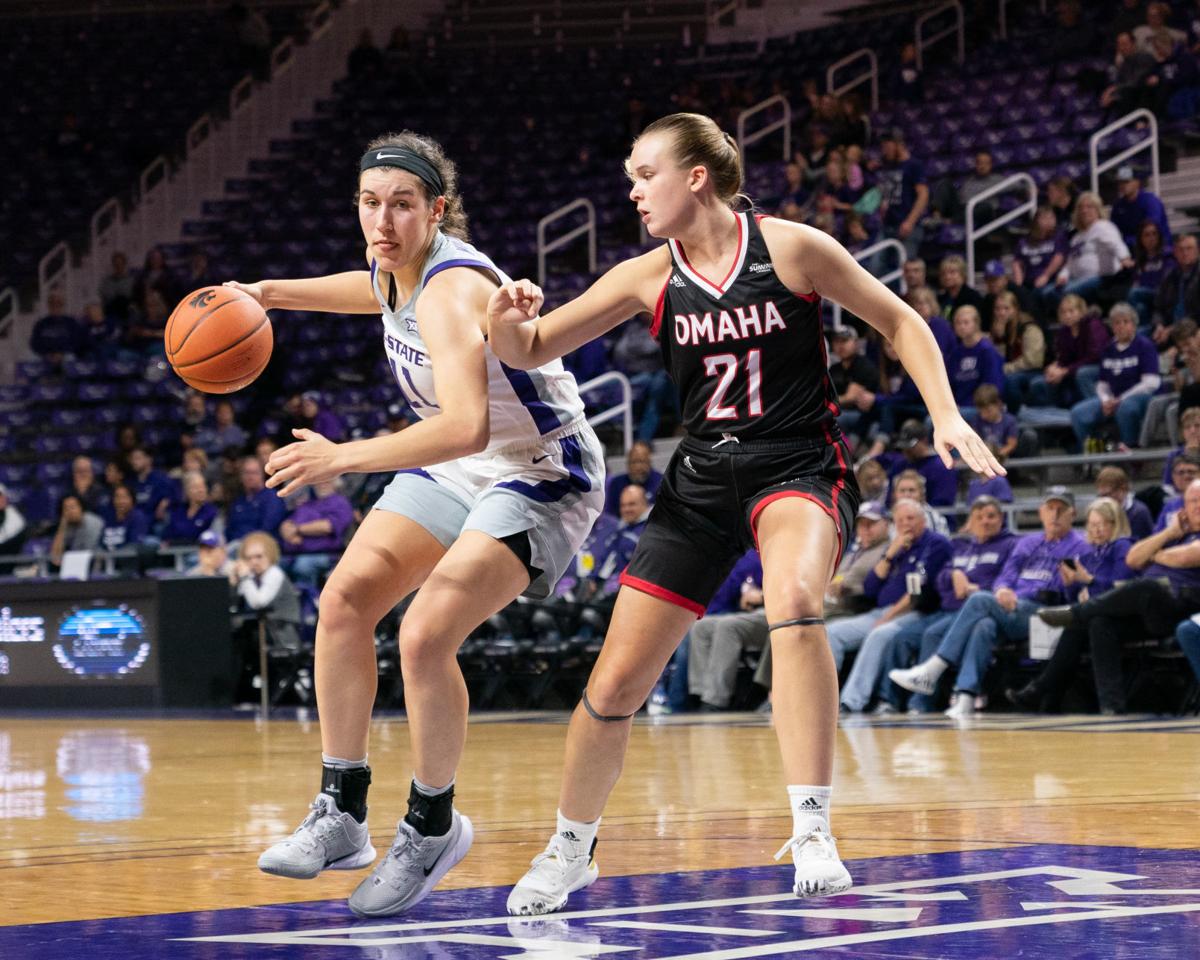 Kansas State senior forward Peyton Williams (left) tries to find a way to the basket against Omaha on Nov. 18. Williams recorded a 17-point, 10-board double-double against Michigan State on Saturday in the team’s 65-60 loss at the Junkanoo Jam in Bimini, Bahamas. See box score, below. 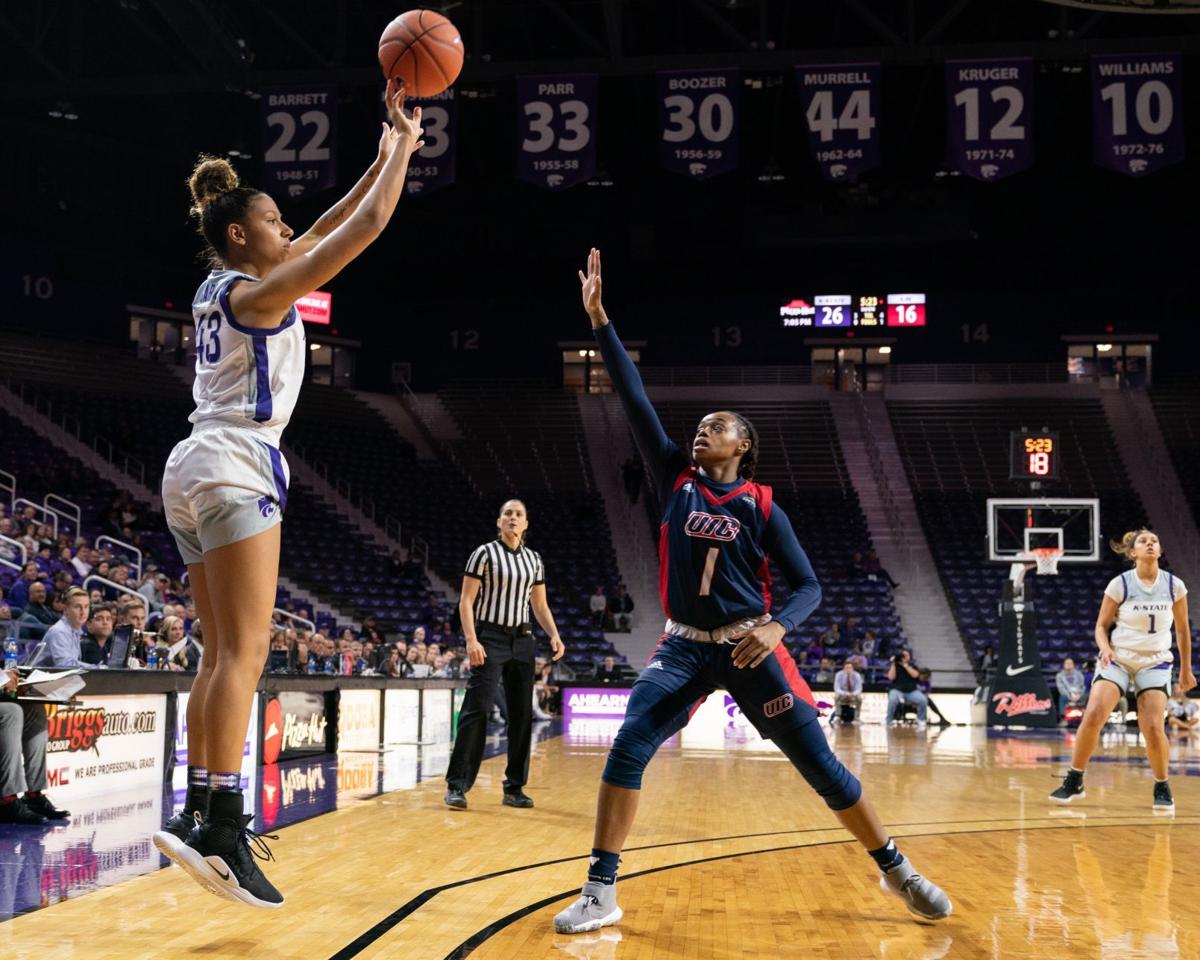 Kansas State guard Chrissy Carr rises for a 3-pointer against UIC on Nov. 11. Carr finished with 12 points against on Saturday against the Spartans.

Kansas State senior forward Peyton Williams (left) tries to find a way to the basket against Omaha on Nov. 18. Williams recorded a 17-point, 10-board double-double against Michigan State on Saturday in the team’s 65-60 loss at the Junkanoo Jam in Bimini, Bahamas. See box score, below.

Kansas State guard Chrissy Carr rises for a 3-pointer against UIC on Nov. 11. Carr finished with 12 points against on Saturday against the Spartans.

Ayoka Lee and Peyton Williams combined for 39 points and 23 rebounds. Kansas State had a fourth quarter lead, too.

But No. 15 Michigan State took advantage of a struggling Wildcats team down the stretch to win 65-60 Saturday evening at the 17th annual Junkanoo Jam in Bimini, Bahamas.

Kansas State (3-3) got fierce performances from Lee and Williams. Lee received Junkanoo Jam – Bimini Division All-Tournament Team honors after finishing with a career-high 22 points on 8-of-9 shooting and 6-of-7 from the charity stripe. She combined that with 13 rebounds and a career-best six blocks. Lee had her second career game where she recorded a double-double with five or more blocks, becoming to the fourth player in program history to do such.

The Wildcats called a timeout and responded out of it with a 12-2 run of their own to finish the first quarter with a 25-21 lead.

Williams sparked the run on a mid-range jumpshot, followed by a putback from Lee.

Chrissy Carr nailed two 3-pointers during the run and Lee finished the first quarter with 11 points, tying a school record for points in a quarter.

Kansas State only scored six points in a sluggish second quarter, but only trailed Michigan State 33-31 at halftime.

The third quarter was similarly slow for both teams, which combined for 15 points on 6-of-28 shooting. Lee had six of the Wildcats’ 10 points in the quarter as they took a 41-38 lead over the Spartans heading into the final frame.

Michigan State opened the fourth quarter on a 5-0 run but Williams scored two layups to reclaim a 45-43 lead for Kansas State with 7:07 left in the game.

Williams scored six points against Michigan State’s two in a run to give the Wildcats a 54-53 lead with 2:28 to play. The Spartans exploded to an 8-0 run to give them a 61-54 lead with 45 seconds left in the game.

Carr, who finished with 12 points, buried a couple 3-pointers to close the gap, but the deficit proved too much.

Kansas State will have a chance at ending its three-game losing skid on Tuesday at Bramlage Coliseum against UIW at 6:30 p.m.

The Wildcats suffered its second consecutive loss of the season in a 72-68 game against Memphis is the program’s fourth Junkanoo Jam Friday afternoon.

Kansas State (3-2) held a nine-point lead in the third quarter after a great start to open the half. Four points from Lee and a 3-pointer from Rachel Ranke propelled the Wildcats from a 34-32 to a 41-31 lead.

Lee and Jasauen Beard scored layups after that run, but Memphis (4-3) dominated the rest of the quarter to make it a four-point game.

The Tigers didn’t stop there, breaking out to a 15-0 tear to take a 56-45 lead. Angela Harris limited the damage with a layup to make the deficit single digits entering the fourth quarter.

Memphis’ lead was as big as 13 with 6:32 in the game before Kansas State began clawing back. The Wildcats went on a 12-2 run in the quarter, starting on a layup by Harris. Kansas State chipped Memphis’ lead to three points with two minutes remaining.

Williams came up with an offensive rebound on her own missed free-throw to close the gap even more, but the Wildcats couldn’t score on the extra possession.

The Wildcats came within two points after Chrissy Carr finished in the paint with 1:38 to go. That was the closest the Wildcats got.

The Wildcats scratched themselves at the charity stripe, too, going 5-of-15 at the free throw line.

Lee led the Wildcats in scoring with 14 points, and the team had four total players reach double figures. Memphis’ Jamirah Shutes was dominant in a 27-point performance.

The Wildcats are 3-5 all-time at the Junkanoo Jam after going 0-2 over the weekend.