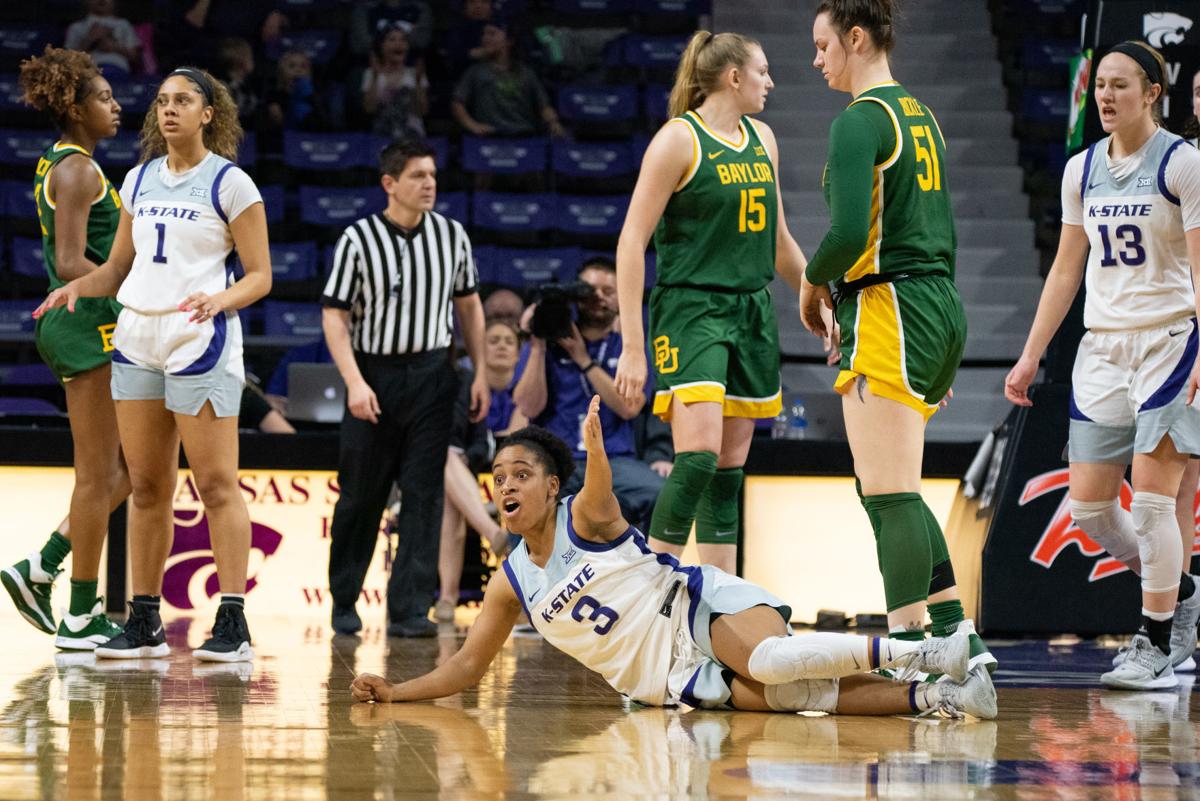 Kansas State guard Angela Harris (3) looks at the officials for a foul to be called during Saturday’s game against Baylor at Bramlage Coliseum. The No. 2 Bears won 54-40, marking their 33rd consecutive victory over the Wildcats dating back to 2004. It also was Baylor’s 51st straight win in a regular-season Big 12 game. 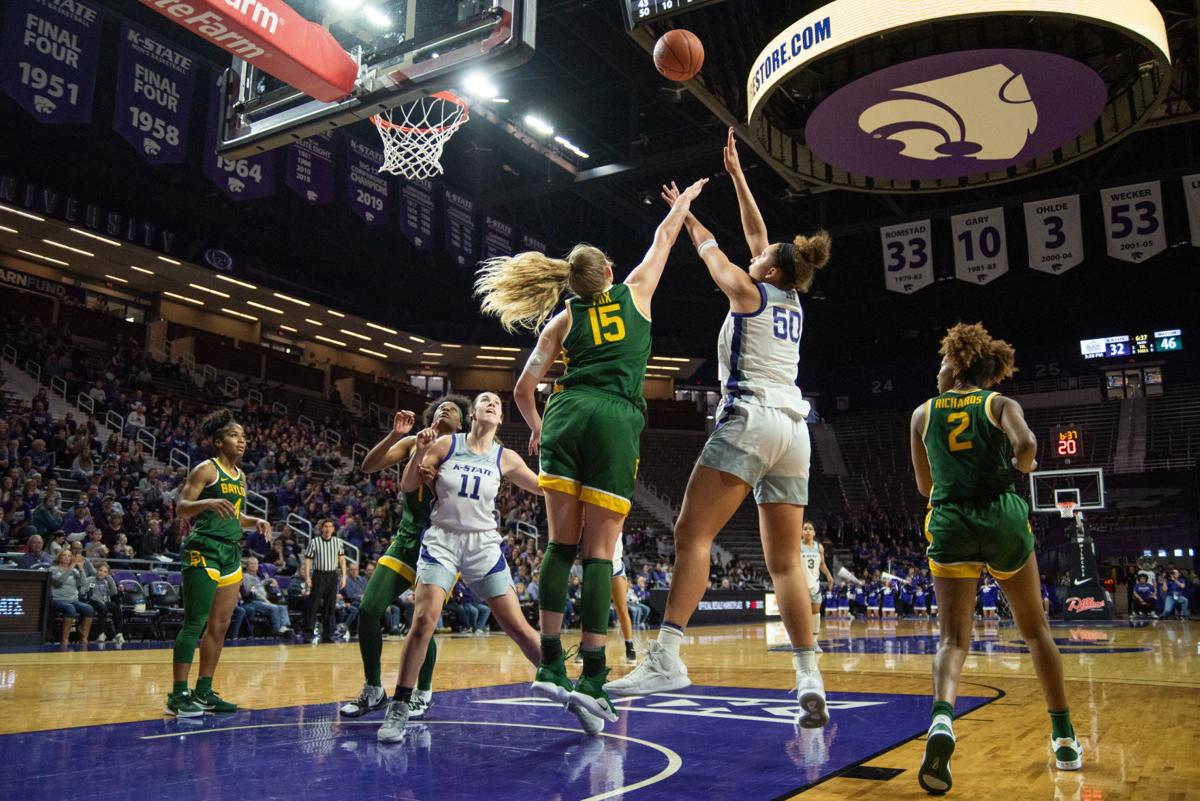 Kansas State’s Ayoka Lee (50) attempts a shot while being guarded by Baylor’s Lauren Cox (15) on Saturday. Lee scored 14 points and grabbed 12 rebounds in the loss.

Kansas State guard Angela Harris (3) looks at the officials for a foul to be called during Saturday’s game against Baylor at Bramlage Coliseum. The No. 2 Bears won 54-40, marking their 33rd consecutive victory over the Wildcats dating back to 2004. It also was Baylor’s 51st straight win in a regular-season Big 12 game.

Kansas State’s Ayoka Lee (50) attempts a shot while being guarded by Baylor’s Lauren Cox (15) on Saturday. Lee scored 14 points and grabbed 12 rebounds in the loss.

It only took Ayoka Lee some 30 seconds to connect on a pair of free throws late in the fourth quarter against No. 2 Baylor, helping Kansas State draw within 10 in a contest it once trailed by 21.

The Wildcats had ground to make up, and they didn’t have much time to do so, but they had a chance. It only took Baylor another two minutes of game time to slam that door shut, rebuilding a more comfortable lead and icing a 54-40 win over K-State Saturday afternoon at Bramlage Coliseum.

“Tough scoring all day long,” K-State coach Jeff Mittie said. “Baylor is certainly the best defensive team we’ve played all year, and not having seen everybody, I believe they’re the best defensive team in the country, because (positions) one through five, they defend. They have a great awareness, they’ve got great size, great athletic ability.”

This will go down as another loss for the Wildcats (10-11, 4-6 Big 12), but it’s the closest they’ve come to upsetting the Lady Bears in a long while.

Lee posted 14 points and 12 rebounds and senior forward Peyton Williams added 12 points and eight boards, which helped K-State hang around, something the Wildcats haven’t been able to say lately in this matchup.

But K-State misfired on all 18 of its 3-pointers. That’s a key reason why the Wildcats came up short for the 33rd straight time against the Lady Bears.

K-State shot just 21% from the field overall. The Wildcats missed a few gimmes, especially those flip-ins that Lee loves, but the Lady Bears (21-1, 10-0) were part of that, too.

“There are small windows. Smaller windows,” Mittie said. “We’re still hesitating on making those passes. When you hesitate for half a second, they have great closing ability, whether it be the post or whether it be a perimeter player. That, probably, is impacting our windows to shoot.

Anyone who knows a smidgen about Baylor knows this game always figured to be the hardest on K-State’s schedule. The Lady Bears are the defending national champions, after all, and on Wednesday, they notched their 50th straight Big 12 win. They’re a perennial powerhouse, and that may be selling them short.

Another reason why Baylor always figured to have an edge: Post play. This season, K-State has relied on Lee and Williams to supply much of the team’s offense, using their size advantages underneath to bury defenders and score on short bank shots and layups.

Against the Lady Bears, the Wildcats did that in doses. Just not the way they have in games past. Lee needed 14 shots to post 14 points. Williams needed 11 shots to reach 12 points.

Combine those numbers with the way K-State failed to sink a single 3-pointer and it’s easy to understand why the Wildcats scored a season-low in points on Saturday.

“One of the things that we talked about on offense,” Williams said, “was slowing the pace down a little bit and and playing more to a speed that wouldn’t let them just run away and allow a lot of up-and-down. I think we wanted it to be a little bit more methodical and slower-paced. I think we were moving the ball within the offense that we were talking about as the game plan.”

Back to defense, though: K-State played it pretty well. The Lady Bears’ 54 points are their fewest this season, plus their fewest since December 2015. They shot just 38% from the field.

Baylor coach Kim Mulkey said it wasn’t K-State’s defense — it was just, in her own words, “an ugly game.”

To a degree, Mittie pushed back. Said he liked the way his group defended well during certain chunks of the game.

“I thought we were really covering up some things late,” Mittie said. “Peyton got some steals in there. J. Beard was active in that stretch. I thought there were some really good things. Obviously, defense wasn’t our problem today.”

It wasn’t, but offense was. That’s what K-State will try to improve when it visits West Virginia on Tuesday.

The good news for the Wildcats is that they won’t face anything similar to the defense the Lady Bears played Saturday.

The bad news may be that getting in a rhythm and avoiding 18 straight misses from range may take more work.

“Just because we struggled today shooting, that won’t impact us on Tuesday,” Mittie said. “We’ll get back to executing and getting better shots. I like the way we’re sticking to game plans right now. I like the way this group is at both ends of the floor. If we continue to do that, we’re going to be a good basketball team in February.”