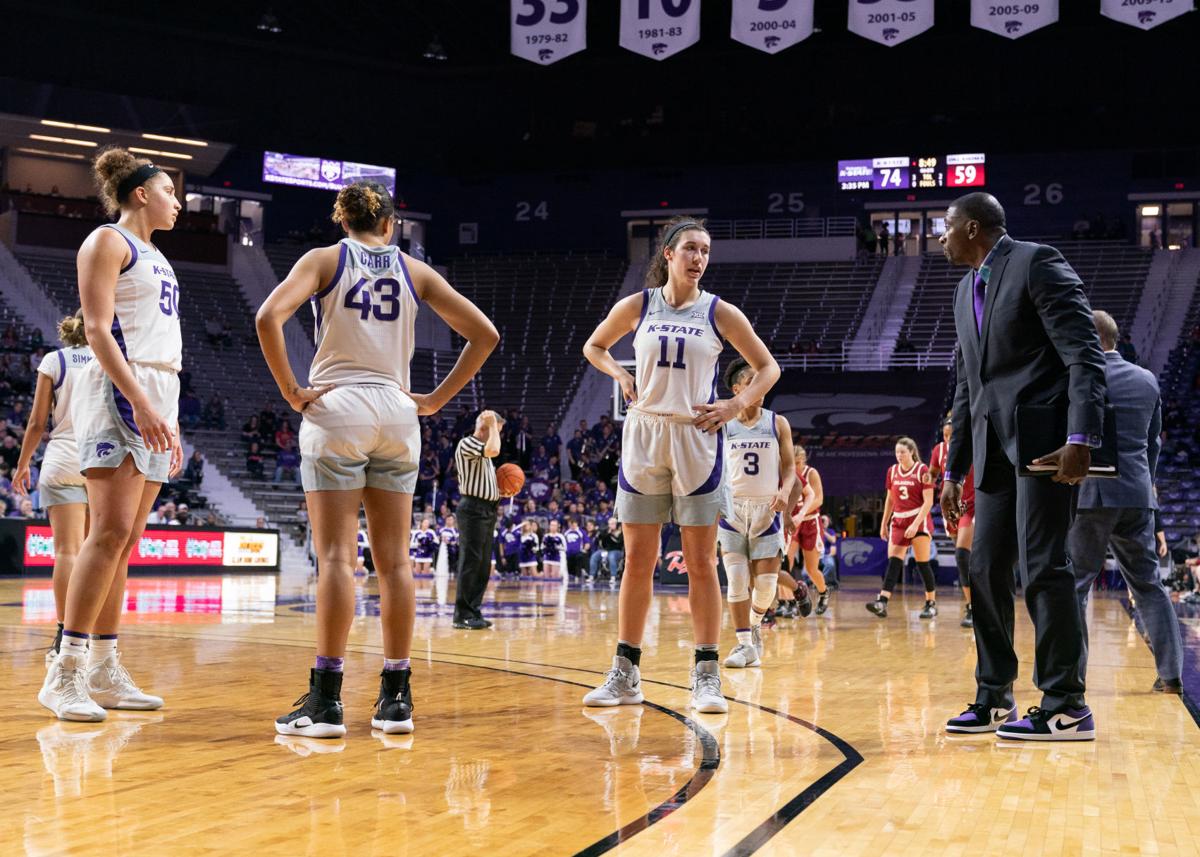 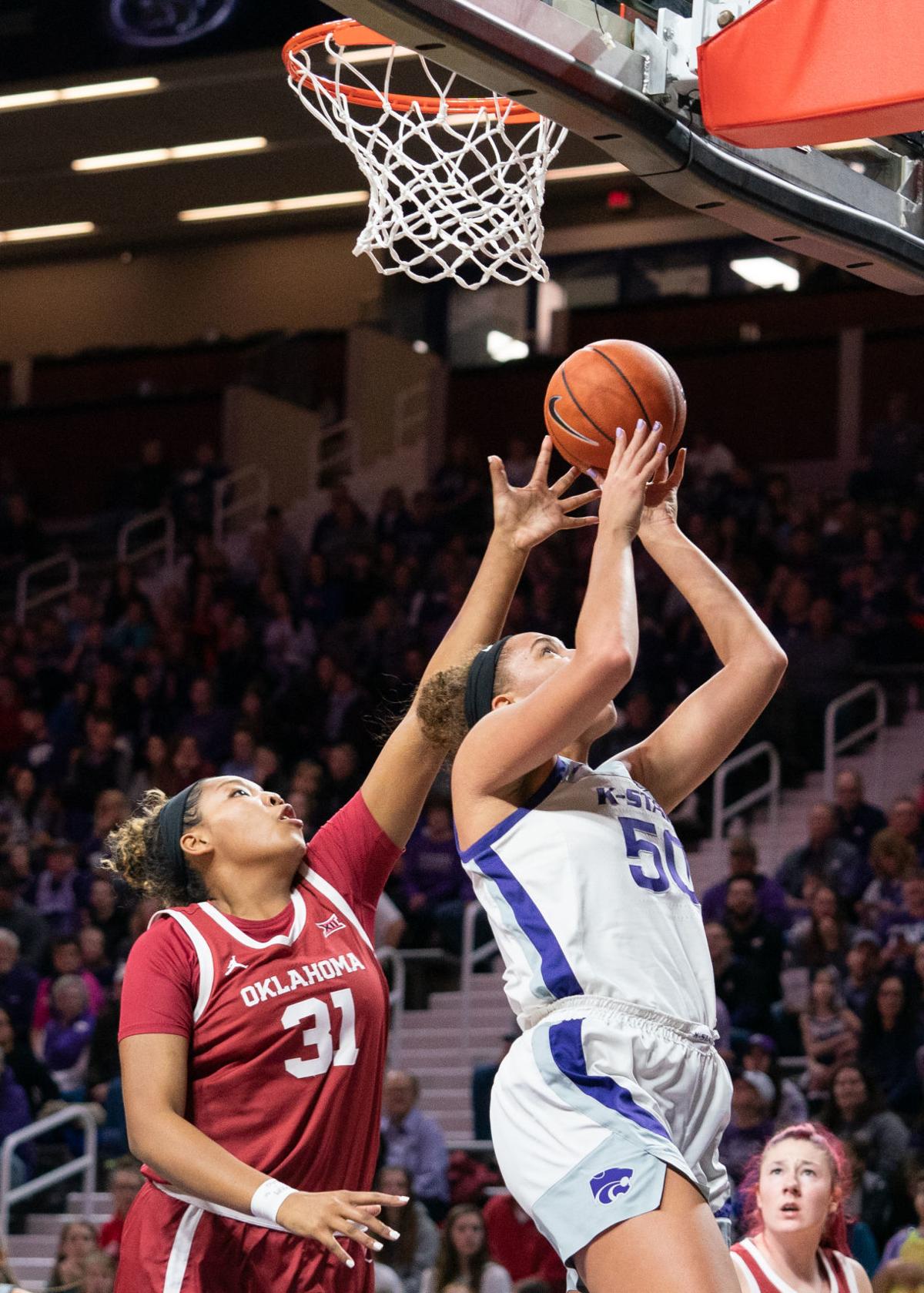 Ayoka Lee goes up for a layup during Saturday’s game against Oklahoma at Bramlage Coliseum. She finished with 23 points and 20 rebounds in the Wildcats’ 92-74 win. Lee is the first player in program history with a double-double of 20 or more points and 20 or more rebounds.

Ayoka Lee goes up for a layup during Saturday’s game against Oklahoma at Bramlage Coliseum. She finished with 23 points and 20 rebounds in the Wildcats’ 92-74 win. Lee is the first player in program history with a double-double of 20 or more points and 20 or more rebounds.

Mere minutes had passed, and the sizzling start Kansas State used to jump on Oklahoma Saturday afternoon had turned frigid. The Wildcats’ offense slowed, while the Sooners’ accelerated.

K-State, which once held a 15-point lead, went into the locker room up just four at halftime.

That meant if the Wildcats wanted to rebuild a comfortable lead, they needed to get back to what was working in the first place.

The hosts reestablished a double-digit lead in the second half, three players eclipsed the 20-point mark and K-State held off Oklahoma down the stretch, good for a 92-74 win at Bramlage Coliseum.

“Any coach is proud of their group when they can execute game plans, stick to it fairly well, stay the course,” K-State coach Jeff Mittie said. “We did that. This is a very explosive Oklahoma team, so I don’t think any lead is safe.”

The players who helped K-State end the worst kind of trend were the ones who have starred the most this season. Senior Peyton Williams tallied 24 points — the 12th time in her last 13 games she’s scored in double figures — and grabbed 11 rebounds.

The other forward who pairs with Williams to establish K-State’s formidable post presence, Ayoka Lee, did what she usually does: 23 points, but she also grabbed a career-high 20 rebounds.

She’s the first Wildcat in program history to record a 20-20 game, and her 20 rebounds ties a school record for most in a single game.

The funny part is that she didn’t know she had that many until after the game. Assistant coach Brian Ostermann tried to tell her, but Lee said she wasn’t entirely paying attention — “I was like, ‘Yeah, we just won,’” she said, laughing.

“Our trainer, Becca, was like, ‘You tied the school record,’” Lee said. “And then all the fans that came up to me mentioned it. But yeah, I had no idea.”

Finally, K-State point guard Angela Harris completed her club’s offensive attack. The senior transfer totaled 20 points, including a key 3-pointer in the second that stretched the Wildcats’ lead back to seven, after the Sooners (10-9, 3-4) had clawed to within four.

But if there was ever a moment that captured the way K-State opened a wide lead, saw it trimmed down and responded — story of the game, really — it came midway through the fourth frame.

Oklahoma reeled off an 8-0 run, drawing within 77-69. It was the closest the Sooners had been since the opening seconds of the third stanza. The Wildcats’ lead was in jeopardy, especially considering there was still 5:30 to play.

So K-State answered. After Oklahoma guard Madi Williams — who registered a team-best 20 points — converted inside, K-State forward Jasauen Beard hit a layup, and Chrissy Carr made all three free throws after she was fouled on a triple.

From there, the Wildcats never trailed by fewer than double figures.

“That’s a great example,” Mittie said, “of us staying aggressive.”

For K-State, this win represented a departure from a pattern that kept surfacing at the worst times.

In the Wildcats’ last three games, all losses, they got off to rotten starts. Opponents jumped on K-State, and though the Wildcats often battled back and made things interesting in the second half, they could never complete any of their comebacks.

On Saturday, all that changed. The Wildcats never trailed.

“We’re getting better at being able to find more people who can contribute,” Williams said. “I mean, obviously ‘Yoki’ (Lee), Angela and Jasauen. Different people throughout the game.”

Still, to understand how that happened, one needs to examine the first half in greater detail.

K-State built a lead as wide as 15, when Lee converted on a short layup, capping an 11-0 run. She was next to unstoppable inside, and the hosts balanced that with the way Harris was producing both on the perimeter and inside.

Yet that’s when Oklahoma began to chip away at things. The Sooners sandwiched seven points around a free throw from Harris, and after Lee flipped in two easy shots, the visitors ripped off nine straight points.

Oklahoma closed the half on a 14-4 run, trimming K-State’s advantage at halftime to 45-41.

Fortunately for the Wildcats, they never relinquished that lead.

That they did so reveals something about their defense.

K-State held Oklahoma guard Taylor Robertson, who entered the game averaging 14.3 points per game, to 13 points. She made just 3 of 12 shots, and 2 of 10 treys.

Overall, the Sooners shot just 38% from the field. They lost 15 turnovers, and the Wildcats turned those into 19 points.

“I think it started with our defense,” Lee said, “and our intensity on defense really opening up things for us on offense.”

Next up for K-State is a road test against rival Kansas on Wednesday night.

The Jayhawks are 12-5, but they’ve lost four of their last five.

Still, it’s a rivalry game. Those sorts of numbers don’t always matter as much in these situations.

What pleased Mittie the most is that after Saturday’s win, he asked his team about its next game. Who did the Wildcats have next? He expected them to know.

“And they didn’t,” Mittie said. “I think that says (something about) the fact that you can talk all the cliches about ‘One game at a time.’ But we’ve really been trying to dig ourselves and fight our way and grind out of this. So it’s good for them to not be able to know who the next game is.”

Ayoka Lee was only minutes removed from scoring 23 points and snaring 20 rebounds, the first 20-20 game in Kansas State women’s basketball his…