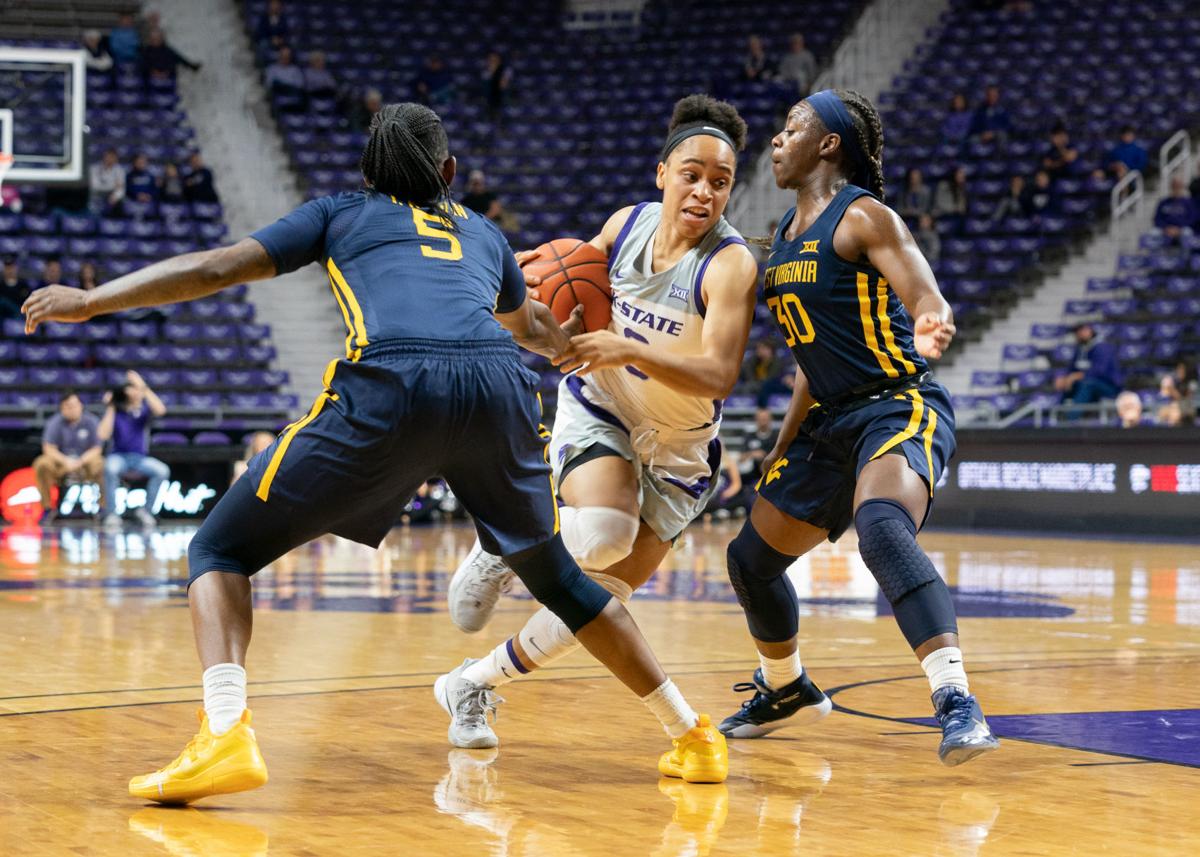 Kansas State’s Angela Harris (center) drives between West Virginia’s Tynice Martin (left) and Madisen Smith (right) during Sunday’s game at Bramlage Coliseum. Harris scored a team-high 16 points for the Wildcats in a 74-63 loss to the No. 19 Mountaineers. 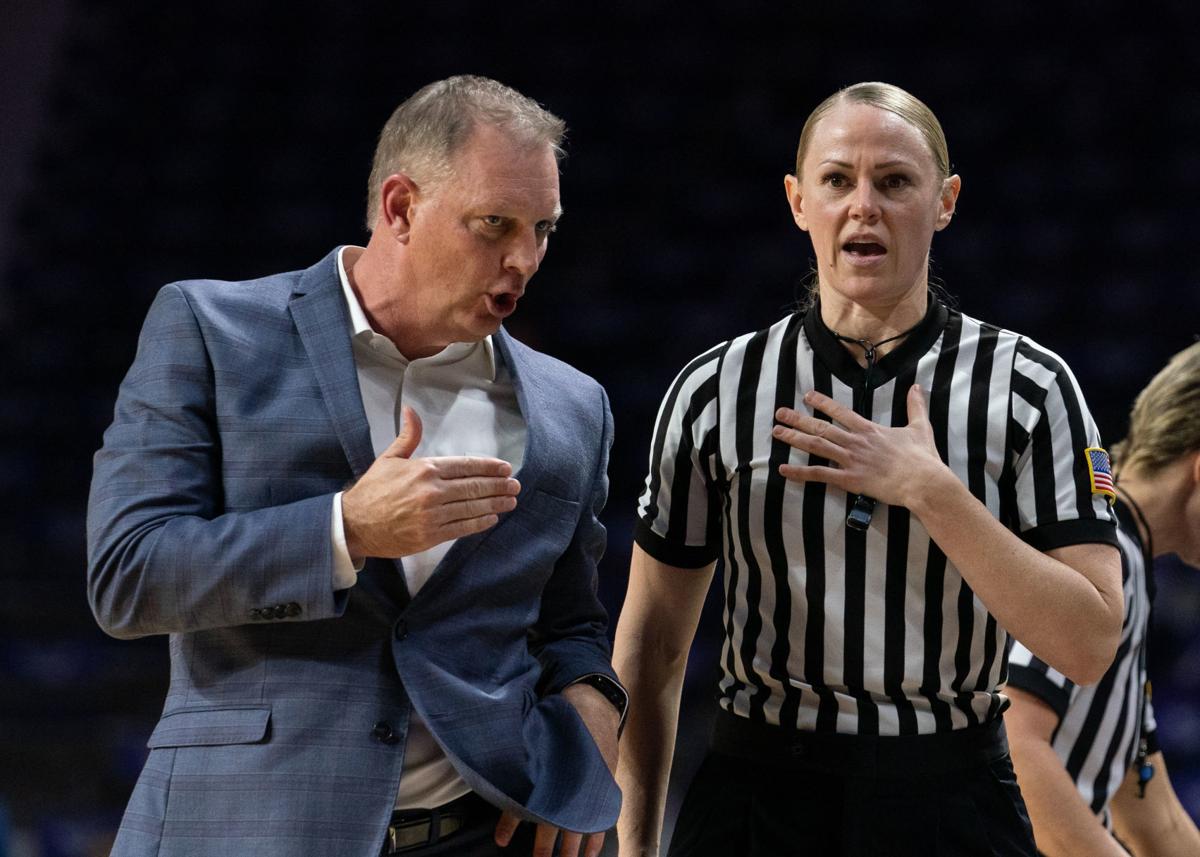 Kansas State head coach Jeff Mittie argues with an official about a call during Sunday’s game. K-State lost to No. 19 West Virginia 74-63 in the Big 12 opener for both teams.

Kansas State’s Angela Harris (center) drives between West Virginia’s Tynice Martin (left) and Madisen Smith (right) during Sunday’s game at Bramlage Coliseum. Harris scored a team-high 16 points for the Wildcats in a 74-63 loss to the No. 19 Mountaineers.

Kansas State head coach Jeff Mittie argues with an official about a call during Sunday’s game. K-State lost to No. 19 West Virginia 74-63 in the Big 12 opener for both teams.

The ball entered the low post, where it came loose, and players batted it around. It careened off the underside of the backboard and fell out of bounds. Officials gave possession to West Virginia.

“That wasn’t me,” K-State forward Jasauen Beard told an official, smiling as she did so. “It’s all right, though.”

For K-State, the rest of the game inspired a few smiles, but it was far from all right.

West Virginia seized a 13-point halftime lead and later ran away with a 74-63 win over K-State at Bramlage Coliseum.

“We were getting caught up in the physicality of West Virginia,” K-State coach Jeff Mittie said, “as opposed to staying true to what we had worked on. I thought we battled in the second half. Thought we did some decent things.

“But every time we made a push, to West Virginia’s credit, they made some big shots.”

That K-State’s offense languished early explains most of the loss. In the first half, the Wildcats shot 30% from the field, and they hit just one of the eight 3-pointers they tried. Post threats Ayoka Lee and Peyton Williams — who finished with 12 and 15 points, respectively — produced a combined six points in the first two quarters.

They found their groove in the second half, and really, so did the team. K-State shot 57% from the field in the final two frames. Lee and Williams returned to their dominant forms. The Wildcats even won the second half, 41-39.

Only problem: K-State (6-6, 0-1 Big 12) played a forgettable first half. The Wildcats couldn’t make up for it in the second.

Point guard Angela Harris supplied a team-best 16 points and added four assists, but neither she nor the rest of her teammates could slow the Mountaineers’ offensive attack.

West Virginia (11-1, 1-0) shot 43% from the field. Guard Kysre Gondrezick led her group with 24 points, including four triples, and Tynice Martin added 18. The Mountaineers also made good on 10 of 28 deep balls, which won’t raise many eyebrows until you realize that the Wildcats converted on just 1 of their 15.

Plus, it didn’t help that K-State played a zone defense in the second half, giving West Virginia open looks on the perimeter.

Add in the 18 turnovers K-State lost, and the 20 points West Virginia turned them into, and you get a recipe for disaster.

“Early, it was some turnovers,” Mittie said. “We had some aggressive turnovers that kept us from having any momentum offensively.”

Still, the Wildcats weren’t always out of it. They closed the third quarter on a 7-0 run, using five points from Williams and a jumper from Beard to draw within 11 headed into the final frame. It represented the Wildcats’ best chance to climb back into a game they spent all but 1:09 trailing.

K-State also clawed to within 11 with a shade over a minute to play.

It just couldn’t come any closer.

“It felt really good. It felt like the momentum was ours,” Williams said. “Coach Mittie said it: Madison Smith hit, like, three 3s in a row. She was one that we talked about — ‘Don’t underestimate her, but if she has an open shot, we’d rather her have an open shot than Gondrezick.’

“To her credit, she really stepped up when her team needed her, and it kind of prevented us from getting over the hump. That’s tough to overcome.”

For K-State, this was the first step into a new reality. For one, the Wildcats are embarking on their conference slate — “A new season,” Mittie said earlier in the week — but they’re also doing so without injured guard Rachel Ranke, a starter who was averaging north of 10 points per game.

The absence hurts K-State on its own merits, but especially because on Sunday, it forced other Wildcats into outsized roles. Beard, who entered averaging 14 minutes per game, started and logged 27 minutes.

“I’ve probably got to trust them a little more,” Mittie said, referring to the four reserves — Simmons, Cymone Goodrich, Laura Macke and Emilee Ebert — who played Sunday. “It’s really about effort. Those that are giving effort get a lot longer leash. If I don’t feel like you’re engaged or giving effort, then that leash is pretty short.”

K-State’s next chance to adjust comes Saturday on the road against Texas Tech, which had its 11-game win streak snapped against Iowa State on Friday.

For Mittie and Co., the good part is that they’ll do so with an encouraging second half to build on.