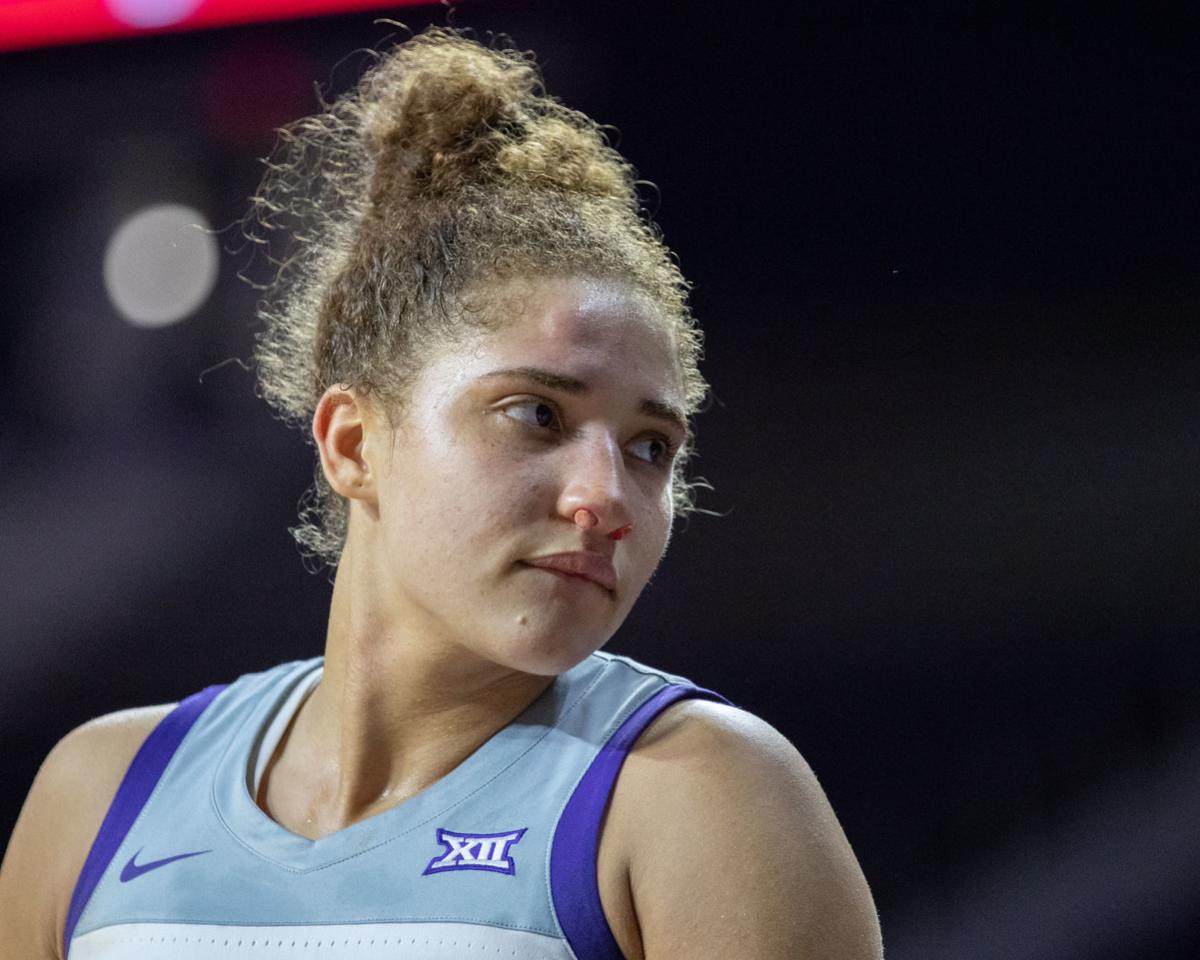 Kansas State center Ayoka Lee looks on from the sideline during the fourth quarter of Wednesday’s game against Oklahoma State. Lee was hurt in a collision during a fight for a loose ball with under two minutes to play. She did not return in the Wildcats’ 70-63 loss. 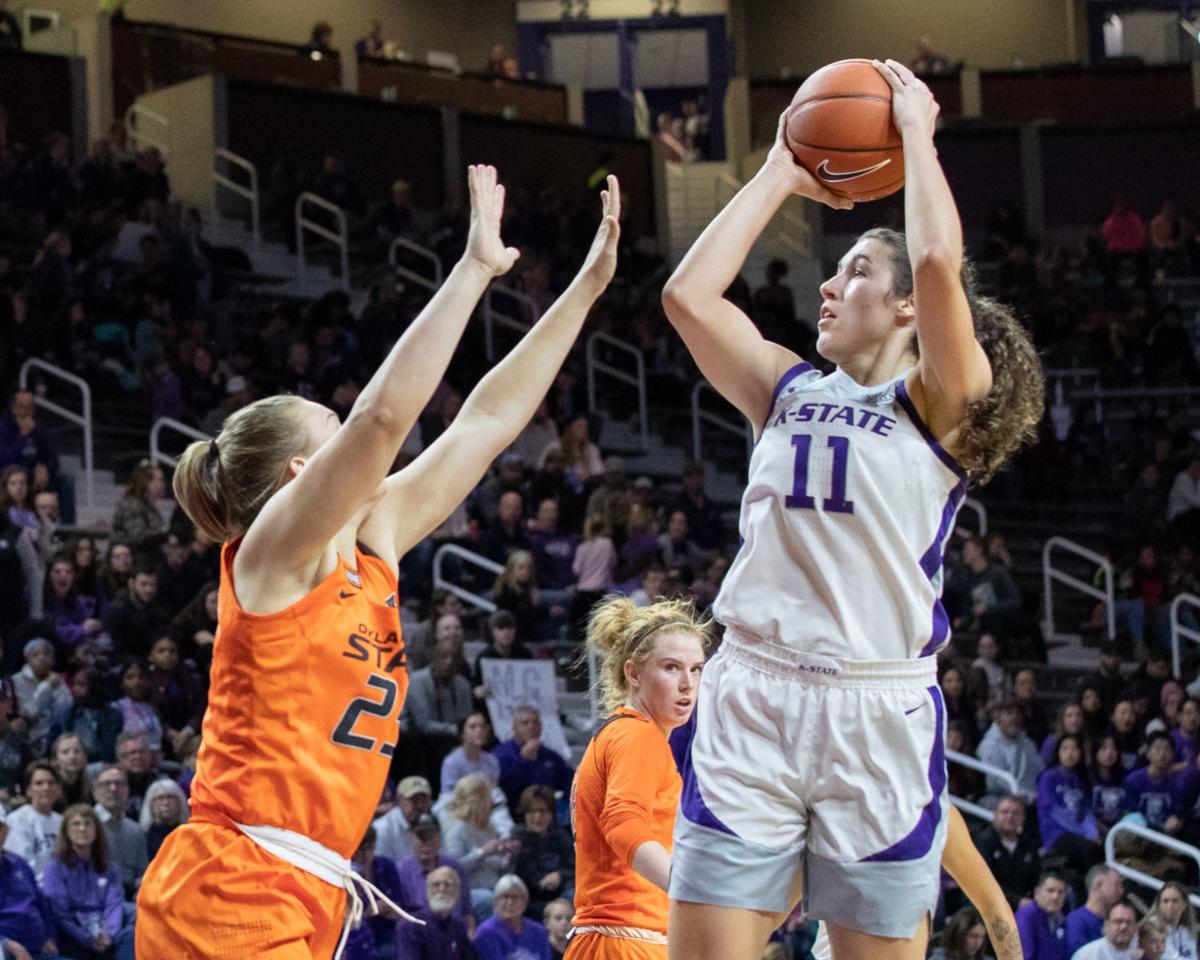 Kansas State’s Peyton Williams (right) goes up for a shot while being defended by Oklahoma State’s Abbie Winchester (left) during Wednesday’s game at Bramlage Coliseum. Williams scored a game-high 25 points to go along with nine rebounds in a 70-63 loss for the Wildcats.

Kansas State center Ayoka Lee looks on from the sideline during the fourth quarter of Wednesday’s game against Oklahoma State. Lee was hurt in a collision during a fight for a loose ball with under two minutes to play. She did not return in the Wildcats’ 70-63 loss.

Kansas State’s Peyton Williams (right) goes up for a shot while being defended by Oklahoma State’s Abbie Winchester (left) during Wednesday’s game at Bramlage Coliseum. Williams scored a game-high 25 points to go along with nine rebounds in a 70-63 loss for the Wildcats.

Oklahoma State guard Vivian Gray caught a pass on the perimeter and immediately fed forward Natasha Mack underneath. Mack turned and flipped it in. Easy two points against Kansas State in the third quarter.

Some 50 feet away, K-State coach Jeff Mittie turned to his bench and shouted something unintelligible, but his message was clear.

How do we keep letting Mack score so easily?

K-State never found the answer in a 70-63 loss to Oklahoma State Wednesday night at Bramlage Coliseum.

“I couldn’t get the guards to run hard in transition,” Mittie said. “I couldn’t get this team to be engaged in areas that they needed to be until — yeah, we make a great run late, but this is not a 20, 25-minute game. You can lose games in the third quarter by letting them stretch it out too much, and that would be the case tonight.”

Mack totaled 24 points on an efficient 9-for-17 shooting clip, dicing up one of the few Big 12 teams that figured to have a lineup capable of slowing her down. Gray also poured in 23 points for the Cowgirls, who made things difficult on the Wildcats’ two post threats in Ayoka Lee and Peyton Williams.

Williams carded 25 points and nine rebounds, and Lee finished with 12 points and 10 boards. The Wildcats (7-7, 1-2 Big 12) needed those contributions, but they also needed those two to find a way to slow Mack.

Neither could. The conference’s sixth-leading scorer also registered seven blocks against K-State.

That had a couple meanings. For one, the Wildcats had trouble stopping her on offense, but Lee — so reliable around the rim this season — was not her usual self.

For example: She shot 5-for-13. She had four shots blocked.

That reality was most noticeable in the third quarter, when K-State managed just 11 points. Oklahoma State grabbed its largest lead of the night at 17 when Gray nailed a triple, one of the two she made Wednesday night.

The Wildcats did make a rally halfway through the fourth quarter, when they drew within four on a steal and breakaway layup from point guard Angela Harris, who posted 15 points and three assists.

That’s when things began to unravel for K-State. With just under two minutes to play, Lee was fighting for a loose ball when she took a shot to the nose. Lee headed to the locker room, and she soon returned to the bench, but not to the game.

K-State then turned it over, and Oklahoma State capitalized with a short jumper from Gray, good for a six-point lead with one minute left.

That was enough to bury the Wildcats.

“The ball went in the basket some. Angela hit the three 3s,” said Mittie, who added that Lee suffered a bloody nose and should be OK moving forward. “Peyton gets the one 3. Things looked pretty good. We were aggressive in that stretch.”

This always figured to be a challenging game for K-State. Oklahoma State is one of the few teams in the conference with the size to match the Wildcats, who have leaned on Lee and Williams in both the scoring and rebounding departments for much of this season.

The Cowgirls didn’t shut either down, but they at least made things harder on them, which most teams can’t say they’ve done. The duo needed 26 shots to score the 27 points they combined for.

For both, the third frame offered the most challenges.

“I don’t want to take anything away from Oklahoma State,” Mittie said. “I thought their pressure was good. You could tell, at least from our end, they were sticking to their game plan pretty well.

For K-State, things hardly get easier from here. The Wildcats will host Texas on Sunday afternoon.

The Longhorns are 9-6, and though they’ve lost two of their last three, they also own a win over then-No. 1 Stanford last month.

Still, with the way Wednesday’s game went, K-State has enough of its own game to work on.

At least according to the man tasked with turning this thing around.

“This particular Texas team, I’ve (gotten) to catch them a couple times. They’re awfully talented,” Mittie said. “But obviously we have our own set of issues before we turn to Texas, and we’ll have to take a hard look at this one tonight.”