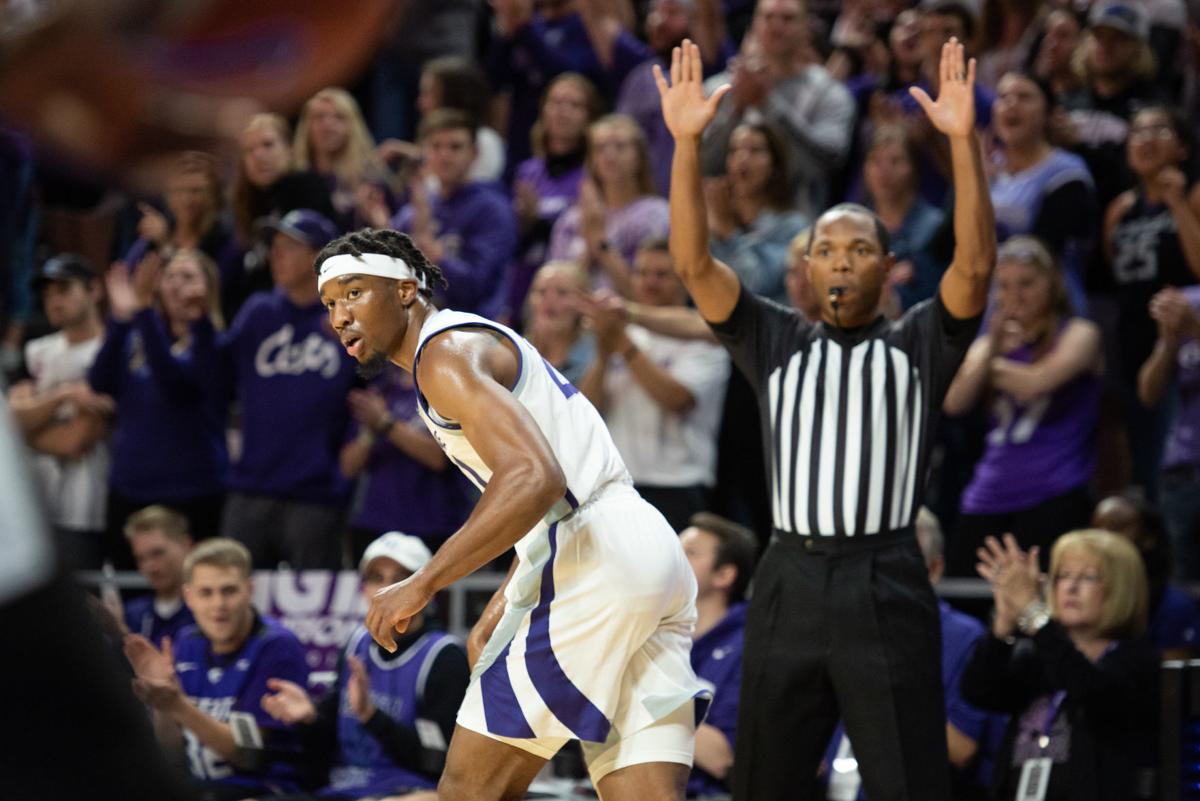 Kansas State’s Xavier Sneed (20) runs back on defense after making a 3-pointer in Tuesday’s game against Arkansas-Pine Bluff. Sneed went 5-for-10 from beyond the arc, part of his team-high 21 points, to lead the Wildcats to a 62-51 victory at Bramlage Coliseum. 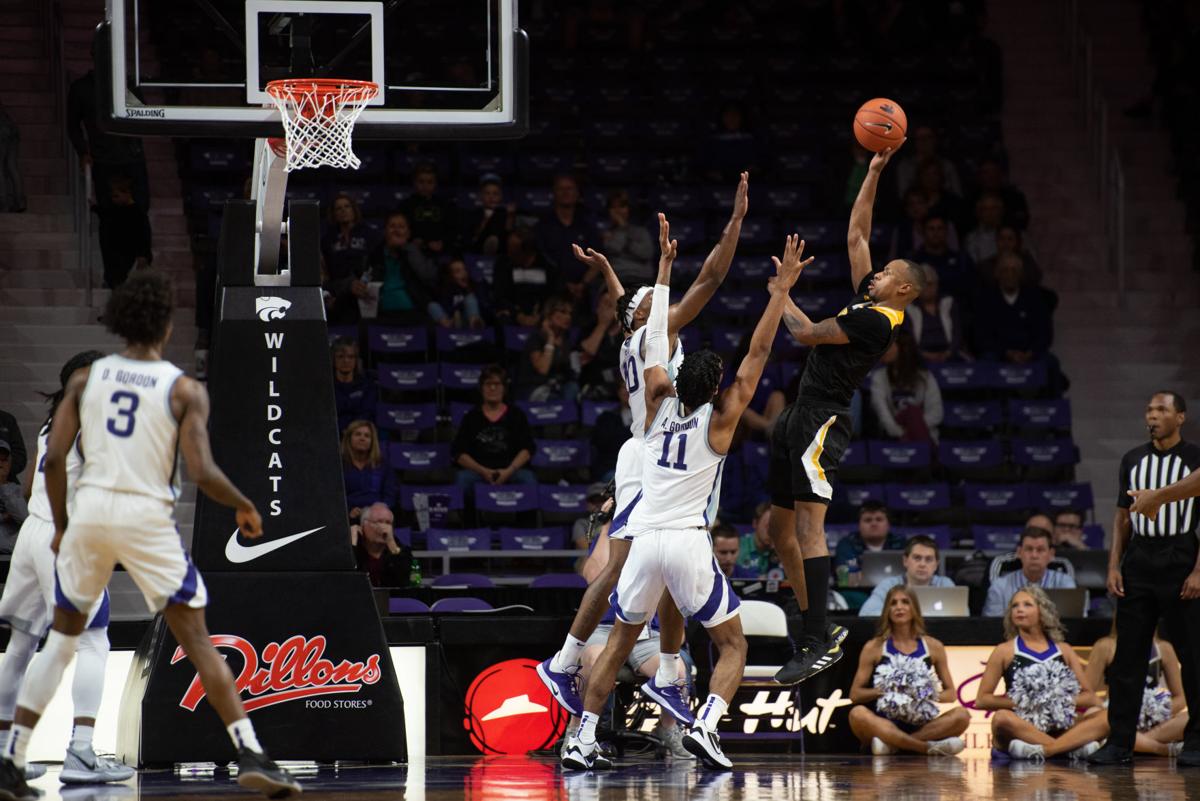 Arkansas-Pine Bluff’s Marquell Carter (2) shoots the ball over Kansas State defenders Xavier Sneed (20) and Antonio Gordon (11) at Bramlage Coliseum on Tuesday. Carter scored 22 points in the team’s 62-51 defeat. The point total was both a game- and career-high for the senior forward.

Kansas State’s Xavier Sneed (20) runs back on defense after making a 3-pointer in Tuesday’s game against Arkansas-Pine Bluff. Sneed went 5-for-10 from beyond the arc, part of his team-high 21 points, to lead the Wildcats to a 62-51 victory at Bramlage Coliseum.

Arkansas-Pine Bluff’s Marquell Carter (2) shoots the ball over Kansas State defenders Xavier Sneed (20) and Antonio Gordon (11) at Bramlage Coliseum on Tuesday. Carter scored 22 points in the team’s 62-51 defeat. The point total was both a game- and career-high for the senior forward.

Kansas State’s game against Arkansas-Pine Bluff Tuesday followed, to a T, the same narrative as its first two home contests.

The story elements remained constant, too.

The primary character: The heavy favorite (the Wildcats).

The secondary character: The (on paper) overmatched team from a small league (the Golden Lions).

The central conflict: K-State’s inability to separate itself from an underdog in the first half.

The resolution: The Wildcats coming out of the locker room after the break, cleaning up their mistakes and pulling away for the win.

When the final second ticked off the clock, it was another happy ending for K-State, which won 62-51 to remain undefeated in 2019-20.

For Wildcat head coach Bruce Weber, though, he’s tired of authoring the same story again and again. One good half of basketball — K-State and Pine Bluff were tied 27-all at intermission — won’t cut it going forward.

“I want to get better. I want to play both halves,” said Weber, whose team improved to 4-0. “If we do that as the competition gets better, we’re going to have ourselves in such a hole that we can’t come back. We’ve got to watch and figure it out.”

At least Tuesday, it didn’t take Weber, or his coaching staff, long to diagnose the problem: The Wildcats assumed it would be a breeze. The Golden Lions (0-4) haven’t had a winning season since 2012-13, when they went 16-14. They’ve finished with a sub-.500 record each of the past six years. And in their three games prior to Tuesday (at South Florida, at Gonzaga, at Grand Canyon), the average margin of defeat was 30.7 points.

So when the Golden Lions hung so tough in the first half — K-State never led by more than eight in a half that saw the teams swap the lead seven times — the hosts were rattled.

“They all thought the game was going to go this way, and it didn’t, and then all of a sudden, we just have to be a little more poised, a little more patient, play with a little better pace,” Weber said. “Again, a couple balls bounce our way, go our way, maybe some plays and the game goes differently. But it didn’t, and it made us grind it out. We’ve had to grind out some things.”

The good news for the Wildcats is that their senior duo steadied them.

Xavier Sneed, who entered the game tied as the Wildcats’ leader in points per game (14.3) alongside Cartier Diarra, took top honors Tuesday, finishing with a team-high 21 on 6-of-12 shooting, including a 5-for-10 effort from beyond the 3-point line. Fellow senior Makol Mawien scored 10 points.

K-State only had trouble slowing down one Pine Bluff player: Marquell Carter, a senior forward. Carter accounted for a game-high 22 points, more than double his closest teammate. (Junior wing Markedric Bell had 10.)

To say no one say Carter’s performance coming would be an understatement. Prior to Tuesday, he had played in only one game this season. That was the Golden Lions’ opener against South Florida on Nov. 5. In that game, he scored two points. In 29 games last season, which included 11 starts, he averaged just 4.5 points per contest. He scored more than 10 only six times, with a high of 13.

The career- and game-high 22 points Carter poured in Tuesday wasn’t surprising to Weber only inasmuch as he told his team to be ready for anything.

“We told them, ‘Expect the unexpected,’ because we didn’t know who was going to start,” Weber said. “Two of their best players are hurt. Carter, from that first game, on film he looked like a pretty good player. He didn’t make shots, but he shot ‘em. Obviously, he played at a pretty good level tonight: 22 (points) and nine (rebounds) is a pretty good game for anybody.”

What’s notable about K-State’s stats after halftime is that it actually shot worse overall (37% compared to 40%) and from beyond the arc (33.3% versus 36.4%) than it did in the first half. The change came defensively.

It reminded Weber of a similar contest from three seasons ago, which like Pine Bluff Tuesday, featured another team from the SWAC. In that contest against Prairie View A&M in 2016, the visitors kept it close during the first half, before then-sophomore forward Dean Wade took over and scored 19 points and grabbed nine rebounds in a 74-55 victory.

“It was a two-point game and same type of setup: They sat in a zone and they held the ball,” said Weber, reflecting back. “It’s not fun for a coach. But at the same time, you learn and grow from it and use every experience you have to get better.”

That’s what Diarra already is doing — and, he said, always has done.

Diarra, who dished out a game-high eight assists Tuesday to up his total to a program-record 27 through four games, said he doesn’t go through life focusing on the negatives. The forgettable first halves that have embodied the season to this point? So what.

In time, he believes they’ll be a thing of the past.

“I understand that from history and the experience we’ve got on this team, these slow starts, it’s going to pass,” he said. “So we’ve just got to make shots. I think we played defense pretty well today. It wasn’t as good on defense in the first half as we usually do, but in the second half, we were playing a lot better and extended the lead.”

The way the Wildcats have come out of the locker room and improved, and won, time after time, is a testament to the team’s resilience, Diarra said.

That’s what he’ll focus on instead of folly-filled first halves.

After beginning his Kansas State career with starts in each of his first three games, true freshman forward Montavious Murphy sat out Tuesday'…