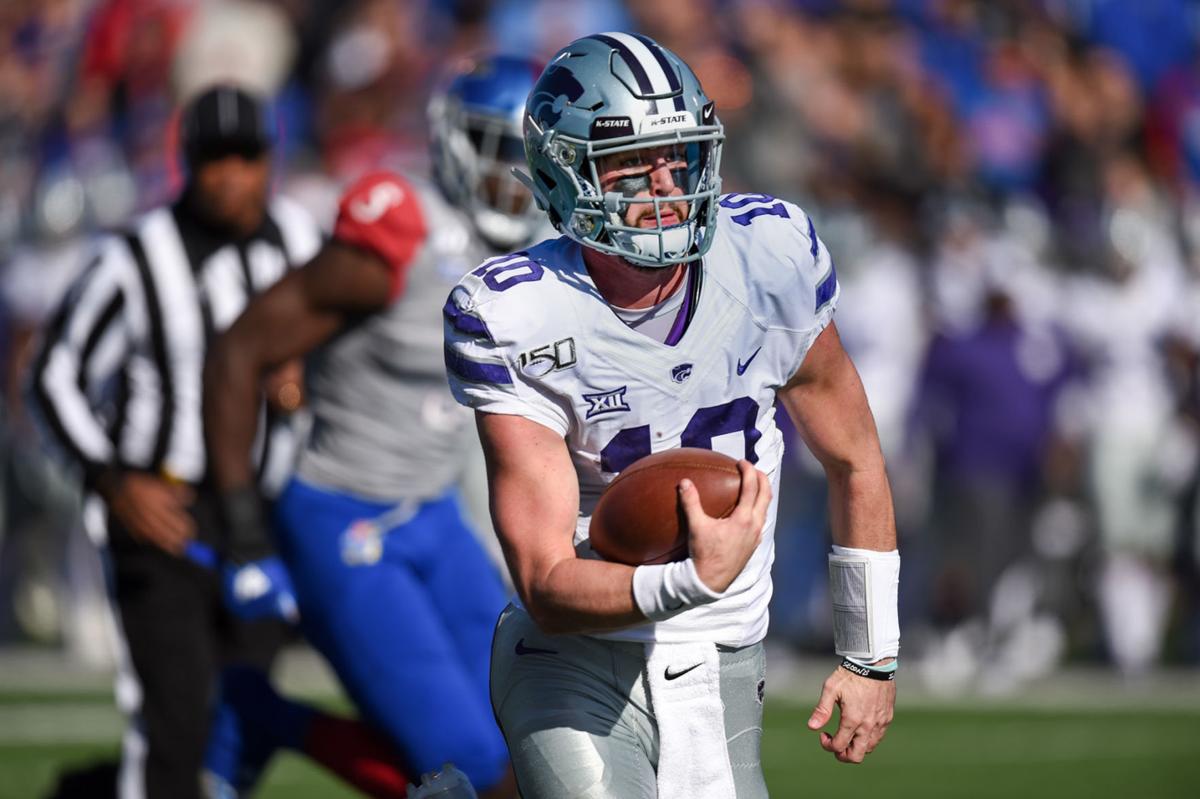 Kansas State quarterback Skylar Thompson runs for a 35-yard gain in the first half against Kansas last week in Lawrence. The Wildcats ran for 342 yards in the win even with their top two running backs battling injuries. 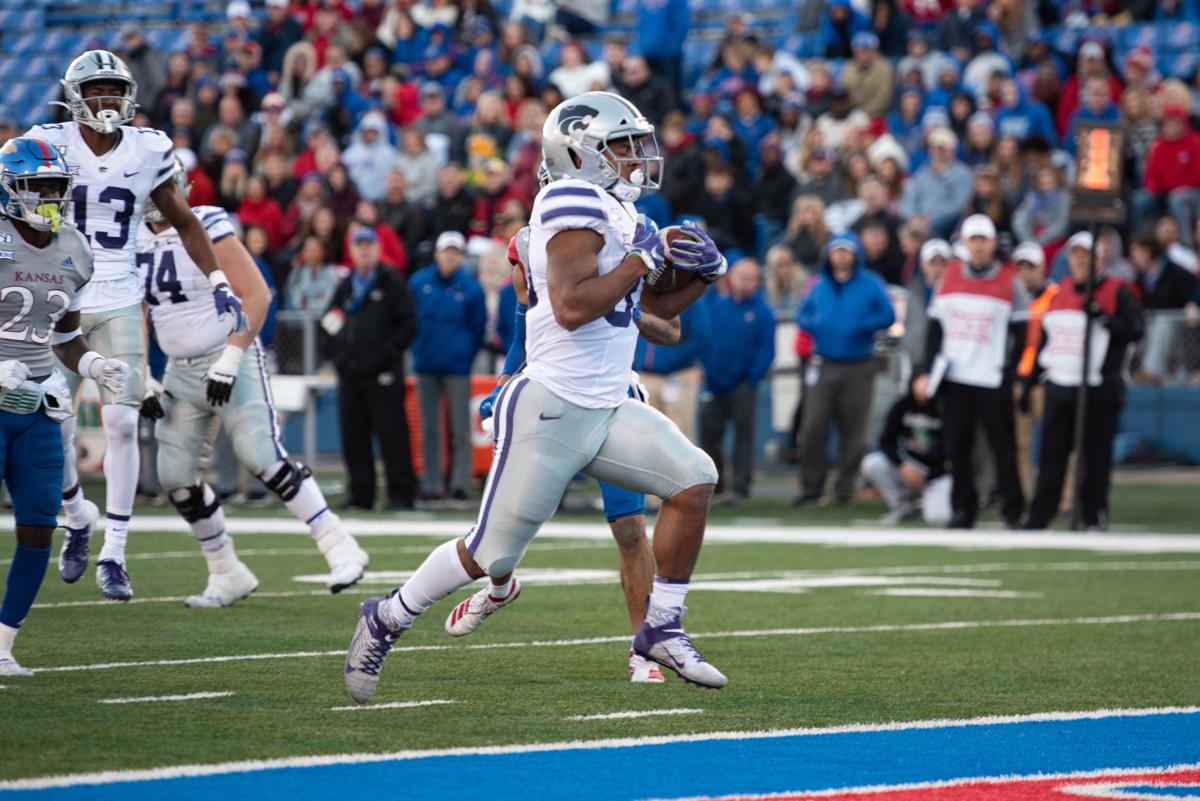 Tyler Burns (33) runs the ball into the end zone and scores a touchdown.

Kansas State quarterback Skylar Thompson runs for a 35-yard gain in the first half against Kansas last week in Lawrence. The Wildcats ran for 342 yards in the win even with their top two running backs battling injuries.

Tyler Burns (33) runs the ball into the end zone and scores a touchdown.

First, the good news for Kansas State: The Wildcats are 6-2, ranked No. 16 in the first College Football Playoff rankings and in position to secure their first road win over Texas in eight years on Saturday.

The bad news: Neither of their top two running backs, James Gilbert and Jordon Brown, played in their previous game, a road win over Kansas.

Both were sidelined with what coaches called “lower-body injuries.” Brown recorded just two early carries before exiting the game for good. Gilbert tried to warm up, but he couldn’t, so he sat out entirely.

Instead, the two watched while the rest of the Wildcats’ running back corps handled business. Junior Harry Trotter notched 20 carries for 92 yards — a career high — and a touchdown. Junior Tyler Burns went for seven carries for 58 yards and a score, and freshman Joe Ervin logged 10 carries for 46 yards.

That can help explain why, even though Gilbert and Brown likely will be available against Texas on Saturday, the Wildcats feel so comfortable with every running back they’ve been feeding.

“It doesn’t matter who goes in at running back,” said Gilbert, who added that he “absolutely” feels ready to play on Saturday. “I feel like the coaches have a lot of trust in all of our ballcarriers. Everybody runs hard. I feel like everybody can get the job done.”

That has become more apparent as the season has progressed. Gilbert always has been the main act on the ground — in fact, he’s led all running backs in yards in each of the seven games he’s played this year — but the Wildcats have begun to sprinkle in hints that a running back department that entered the season so depleted has regained its footing.

The evidence is in the backups. In K-State’s 48-41 win over Oklahoma on Oct. 26, Brown registered 12 carries for 63 yards in a return from injury. Trotter had just two carries, but that was because Thompson was busy going for four touchdowns.

Then, against Kansas, Burns and Trotter assumed bigger roles. That helped the Wildcats total 342 rushing yards.

“It’s a credit to the guys like Harry, Tyler, Joe and Skylar that they were able to rise up and have really good games,” K-State coach Chris Klieman said. “You put more on the offensive line and tight ends and fullbacks to, ‘Hey, you guys really have to step it up because we don’t have two really good running backs.’ We’ve said all along that have a stable of guys we think are pretty capable.”

Parts of those capabilities, Klieman will tell you, have to do with the offensive line. Scott Frantz, Evan Curl, Adam Holtorf, Tyler Mitchell and Nick Kaltmayer — all seniors — have begun to have their way up front. That was apparent in K-State’s win over Oklahoma, and even more so against Kansas.

After all, there’s a reason why K-State is checking in at No. 4 in the Big 12 in rushing offense. Gilbert himself ranks fifth individually.

“They’re playing together, and you hope a bunch of seniors would play together throughout the whole year,” Klieman said. “We just had a couple of weeks where we weren’t all in sync, and part of that is a new system, new terminology, all that stuff.

“But, as we’ve talked about, I know we’re progressing and getting better. I see it every week in practice that we are getting better, but those guys take a lot of pride in being able to rush the football.”

So even though Gilbert and Brown will be what offensive coordinator Courtney Messingham called “gameday” decisions Saturday, the good news for the Wildcats is that they’ve spent the last two weeks proving that they can deliver without their top backs.

“It was a great team effort,” Brown said of the KU win. “It showed our depth at the running back position, and it showed that we can produce from that position whoever plays in the game.”