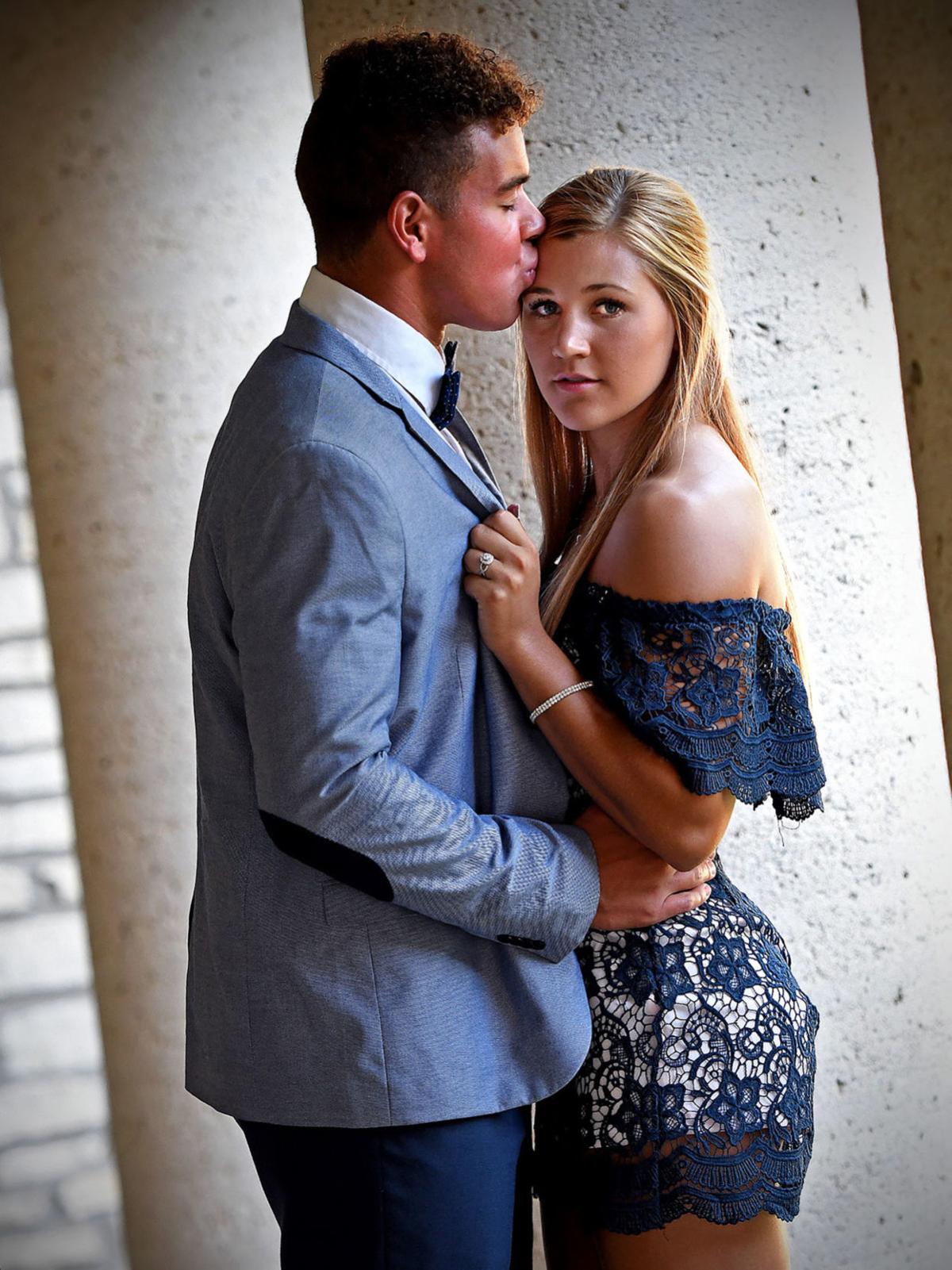 Football player Denzel Goolsby (left) and soccer player Katie Cramer (right) both are student-athletes at Kansas State. They’re both captains for their respective teams. And they’re engaged. Though they lead their own busy lives, they try to find spend time with each other as often as possible. 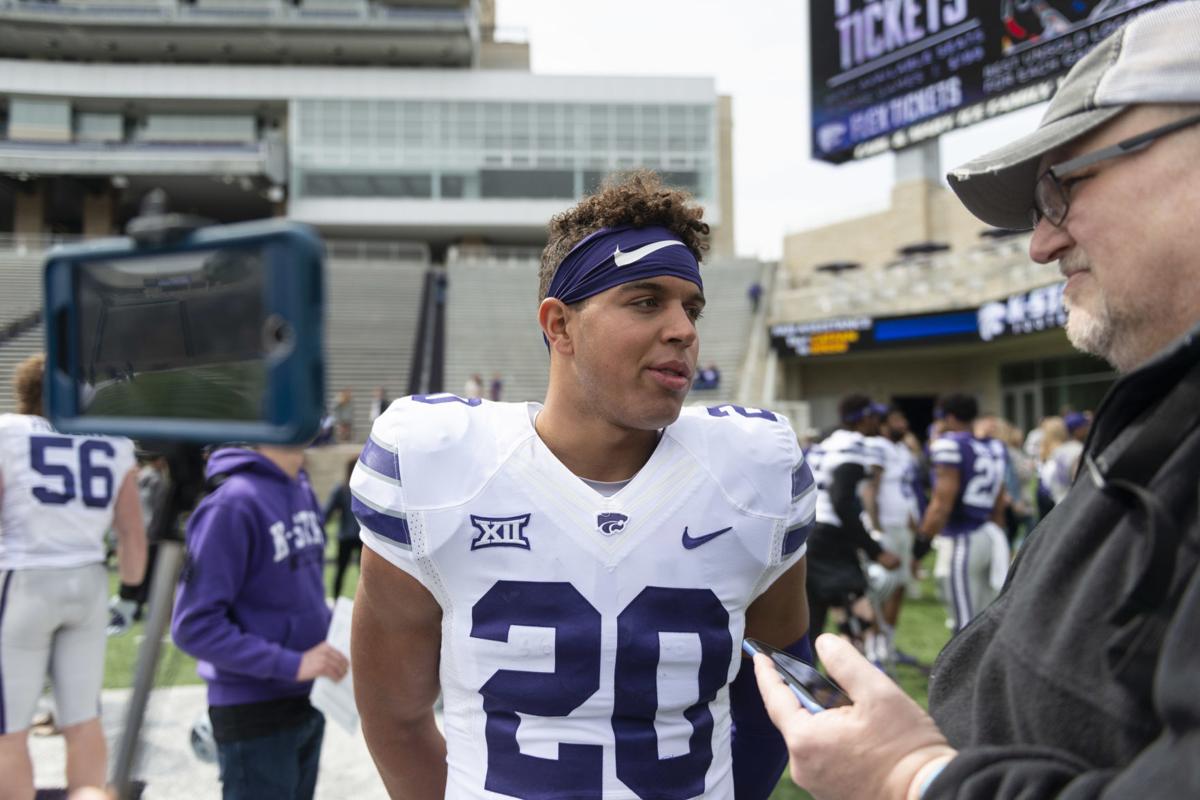 Kansas State defensive back Denzel Goolsby (20) speaks with the media after the Purple-White scrimmage at Bill Snyder Family Stadium in April. Goolsby is one of seven players who will serve as a team captain for the Wildcats this fall. 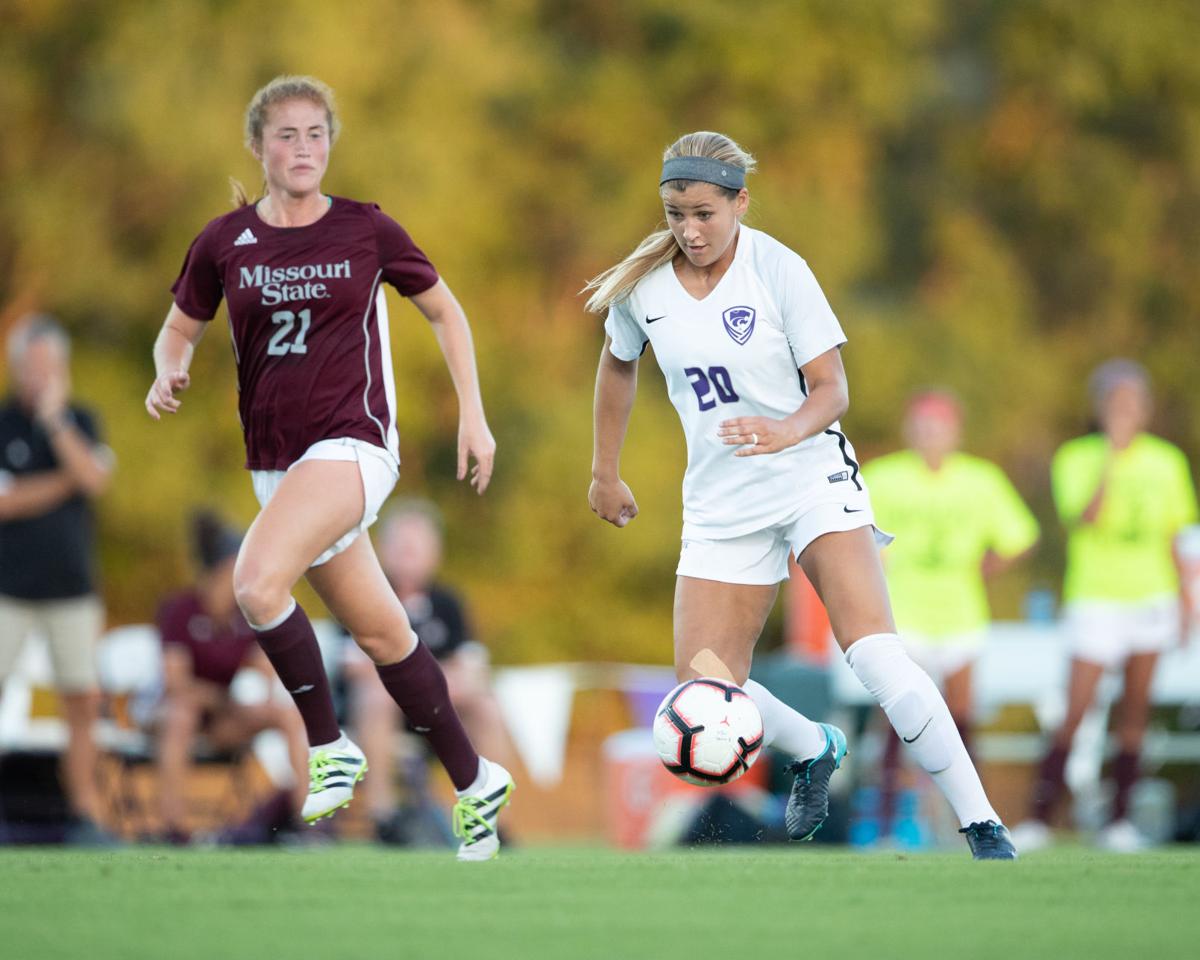 Football player Denzel Goolsby (left) and soccer player Katie Cramer (right) both are student-athletes at Kansas State. They’re both captains for their respective teams. And they’re engaged. Though they lead their own busy lives, they try to find spend time with each other as often as possible.

Kansas State defensive back Denzel Goolsby (20) speaks with the media after the Purple-White scrimmage at Bill Snyder Family Stadium in April. Goolsby is one of seven players who will serve as a team captain for the Wildcats this fall.

One of the most important places in the story of how Kansas State student-athletes Denzel Goolsby and Katie Cramer became fianceés isn’t a physical one, though there are plenty of those behind their relationship.

It’s a digital one.

Though they met at the training table at Bill Snyder Family Stadium, the photos from Goolsby, a senior safety on the football team, and Cramer, a senior forward on the soccer team, tell the story of their relationship, which began around mid-2017. Those are relatively normal. It’s the captions that stand out.

Ask Goolsby, and he’ll tell you some come from song lyrics. Ask Cramer, and she’ll tell you hers usually are original. Either way, they’re all clever.

For example: Back in December 2017, when K-State completed a Cactus Bowl win over UCLA and Goolsby took home Defensive Player of the Game honors, he posted a picture of himself with that trophy and the game trophy with the caption “Feeling like Ace with all this Hardware.”

Another of Goolsby’s posts, from July 4, shows he and Cramer decked out in patriotic gear for the holiday. It includes a caption that reads “They hate us, ‘cause they ain’t U.S.”

“It can be a combination of things,” Goolsby said. “I can be driving and I can hear a song lyric, and I can think of how I can put my twist on that. Some of them can just be — maybe we brainstorm something together. She’s really clever, so I’m getting stuff off her, she’s getting things off me.”

Cramer’s captions are equally sharp. A quick sampling: one that shows her with several teammates, captioned “Trust me at the top it isn’t lonely” — a nod to Meek Mill’s song “Going Bad” with Drake. Another with her and Goolsby that reads “Not a goalie but I’m only playing for keeps.”

To be sure: Goolsby and Cramer aren’t the only couple that takes pride in their Instagram captions, and they won’t win any awards for them — but they provide a peek into the way the two athletes balance schoolwork, sports and their commitment to each other as each begins their senior seasons.

“You can’t really ever fully expect what it’s going to be or when it’s going to be, but we like to brainstorm,” Goolsby said. “Just creativity, it’s something that we try to keep in our relationship, whether that’s through captions or doing fun different date ideas — different types of things to keep it interesting.”

The balance isn’t easy to strike, both said. Goolsby earned his bachelor’s degree in professional strategic selling in May, and he’s now pursuing his MBA. Cramer is working toward a degree that would allow her to attend a physician’s assistant school.

Then they have their sports, whose seasons overlap each fall.

This is for certain, though: Goolsby and Cramer, Wichita natives who attended rival high schools, both like that each plays a sport. It allows both to understand that they’re busy with practices and games and schoolwork, and that making time for each other can pose a challenge at times.

The solution, they found, involves spending time with each other in more places than just home: at the lake, on walks with their golden retriever, Reba, or in the air on skydiving trips.

“I would say (we don’t see each other) often for a couple that’s engaged,” Cramer said, “but we make it work, for sure. We take advantage of any free time that we have, and we go do fun things. ... When we do have time, we spend it doing something fun, usually outside, adventurous.”

Matter of fact, that’s exactly how Goolsby proposed to Cramer, back in the summer of 2018.

The story goes something like this: Goolsby took Cramer on what she thought was another hiking trip in Colorado. She had no reason to believe otherwise, Goolsby said. Just another adventure.

Goolsby even had a playlist to soundtrack their walk, but what Cramer didn’t know was that when a certain song came on — Alicia Keys’ “Fallin’” — that was Goolsby’s cue to pop the question.

So when Goolsby’s sister, Banner, was in place and ready to snap the pictures, the first few notes of the song began to play. Then Goolsby proposed.

“I was not expecting it at all. I was so surprised,” Cramer said. “It was perfect. He planned it out perfect. He customized my ring. He did it all. He went the whole 10 yards, and it was definitely more than I would ever ask for or ever hope for in a proposal, and in a man in general.”

The two planned their wedding for June 20, 2020 — one, because it’s a Saturday, and two, because it represents the No. 20 jerseys they wear.

Surprises, as it happens, have played something of a pivotal role in their relationship.

One of the most recent ones came this February, on Valentine’s Day. Goolsby had Cramer over for what she thought was another dinner.

“I thought he was playing a joke on me,” Cramer said. “I was like, ‘This is not serious.’ I was so excited. It was perfect, just like everything else he does.”

What may not surprise Goolsby or Cramer about the other is that they’re entirely committed to each other, to making this work, even as their schedules conflict and time management becomes difficult.

The reason Goolsby wanted to become engaged with Cramer during college, he’ll tell you, was that it just felt right, especially after he asked Cramer’s parents for their permission — at Taco Lucha, of all places.

“Well, then you get to that point and you think of something else. You can always think of another reason. So if you feel like God’s put it in your heart and you’re compatible with somebody else, you’ve found the woman of your dreams, then it doesn’t make sense to wait.”

For her part, Cramer is totally on board.

Just as long as they stay occupied.

“It’s a lot, but it keeps us busy,” Cramer said. “I think we’re both the kind of people that we’re so motivated all the time that our schedules have to be busy or we’re going to go crazy. We just feed off that energy from each other. It’s hard, but it’s the grind, and we honestly love it.”