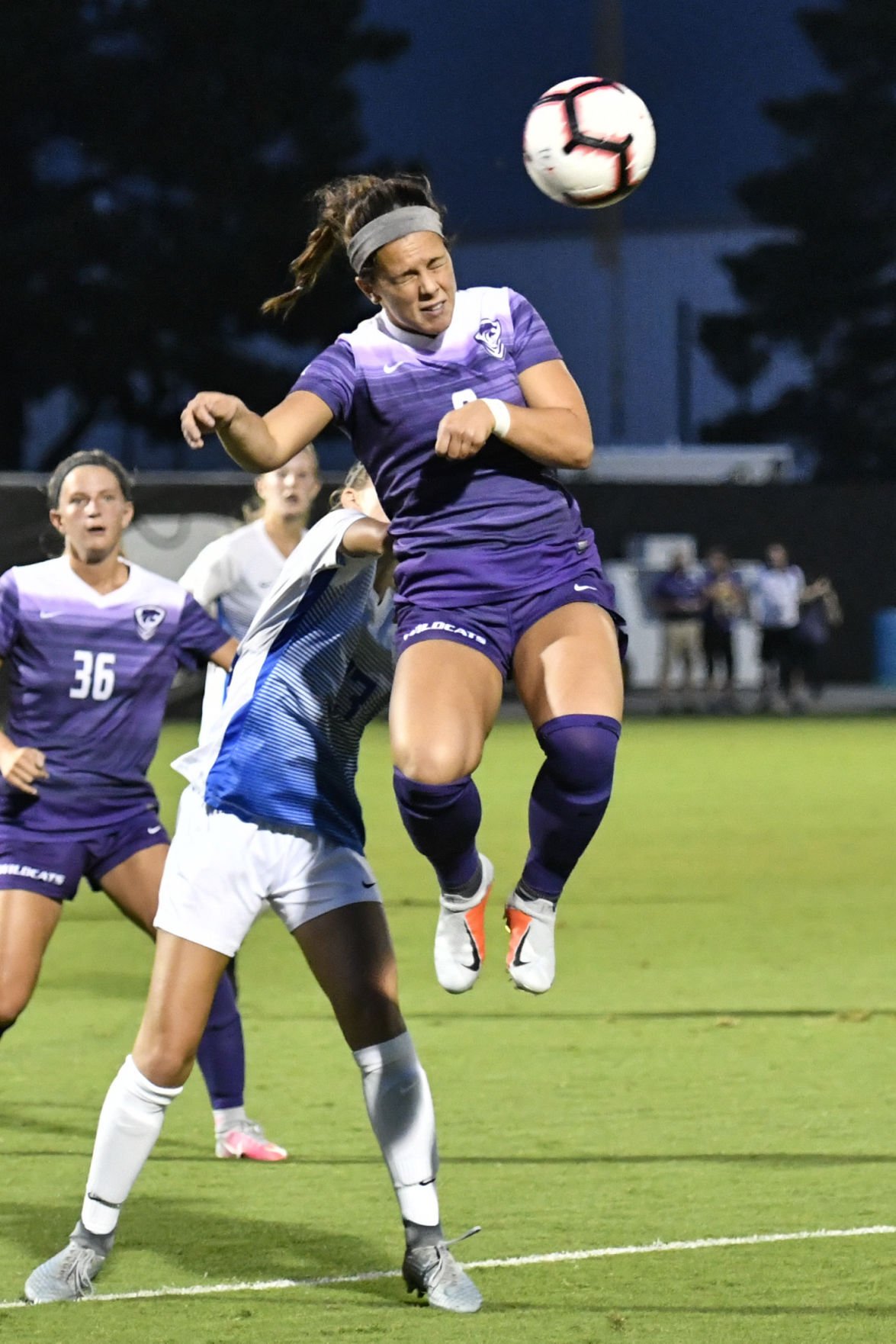 Kansas State midfielder Brookelynn Entz (8) heads the ball away from Saint Louis midfielder Megan Crevoiserat (23) in the 2018 season opener. Entz, a senior, will play her final game as a Wildcat on Friday. K-State hosts Texas Tech at 5 p.m. Friday at Buser Family Park. 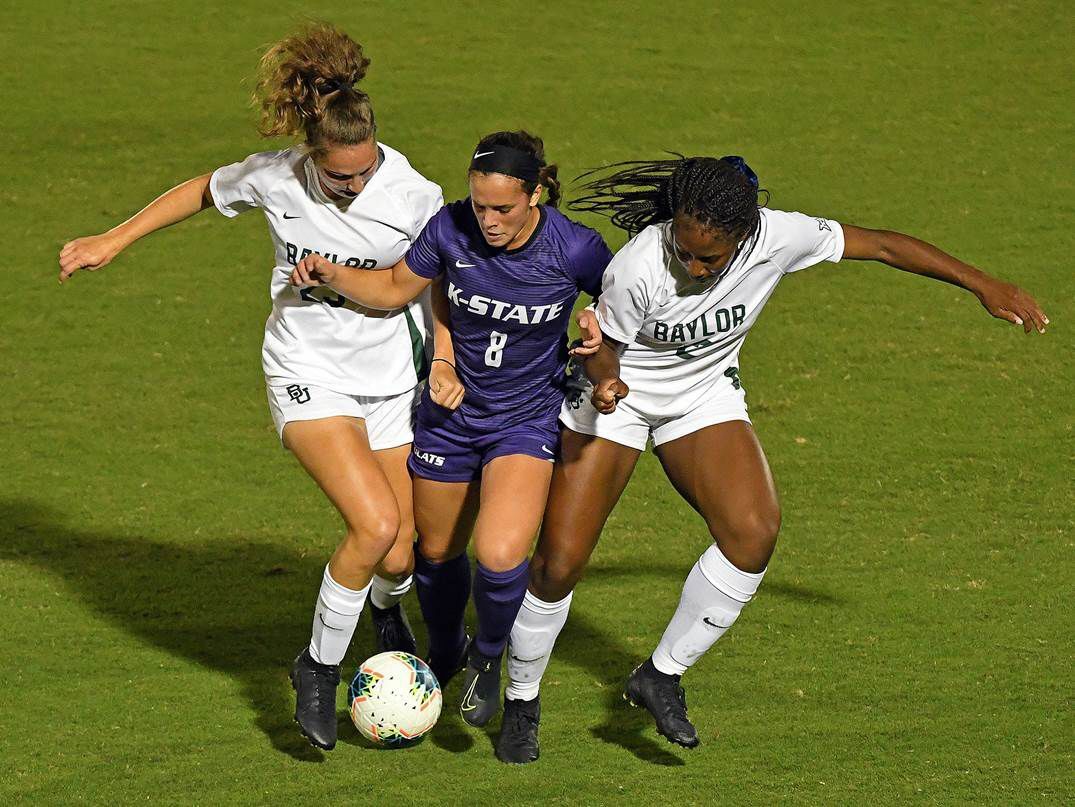 Kansas State midfielder Brookelynn Entz battles for the ball during a home game against Baylor on Sept. 26, 2019. Entz will play her final game in a K-State uniform Friday, when the team hosts Texas Tech at Buser Family Park. Entz owns eight school records.

Kansas State midfielder Brookelynn Entz (8) heads the ball away from Saint Louis midfielder Megan Crevoiserat (23) in the 2018 season opener. Entz, a senior, will play her final game as a Wildcat on Friday. K-State hosts Texas Tech at 5 p.m. Friday at Buser Family Park.

Kansas State midfielder Brookelynn Entz battles for the ball during a home game against Baylor on Sept. 26, 2019. Entz will play her final game in a K-State uniform Friday, when the team hosts Texas Tech at Buser Family Park. Entz owns eight school records.

Four years ago, head coach Mike Dibbini and assistant coach Gabe Romo, in the midst of building Kansas State’s soccer program from scratch, took a chance on a talented player from Newton, one they had known since she was in third grade.

The Newton star, Brookelynn Entz had not yet received the Power 5 scholarship offer she was looking for, and in K-State, she saw an opportunity. A lifelong K-State fan, she jumped at the chance as soon as the Wildcats offered.

Now, Entz heads into her final game as a Wildcat on Friday against Texas Tech. She owns eight school records — arguably the best player in the young program’s history — and possibly will become the first K-State player to make it to the National Women’s Soccer League.

“It means everything to me (to be a Wildcat),” Entz said. “This program has given me everything. Dibbini believed in me from the start when other coaches did not, because I was from Newton. It means everything for me to be here. I love this place, and I am so proud to build this program.”

When Entz arrived at Kansas State, she had a goal to put the program on the map nationally.

“She is a legacy player for us,” Dibbini said. “She is going to go down as one of the top players this program has had. She will continue to be a clinical player for us as far as being able to continue to recruit. She has paved the way for so many young players who want to be like her. I am proud of her on and off the field. She has been tremendous for this program.”

Her biggest successes this season have come during K-State’s last five games. In the Wildcats’ record-setting Big 12 win against Oklahoma on Oct. 16, K-State set a mark for largest margin of victory (3-0) over a conference opponent. Entz scored the third and final goal of that game in dramatic fashion on a penalty kick.

After that win, the Wildcats needed just one more goal to set a single-season program record. Two games later, against then-ranked No. 5 TCU, Maddie Souder scored to set the record, and then Entz added another later in the first half of the game to extend the record.

A 5-foot-4 midfielder, Entz broke another record the following game against Iowa State, which K-State won 2-0. Not only did it give the Wildcats two victories in league play for the first time ever, but Entz played a key role, scoring both goals.

“She has a ‘Mamba mentality,’” said Romo, referring to a mindset popularized by the late Kobe Bryant, which centered around constant improvement in every aspect of life. “She literally took the game over. When we needed somebody to get on the ball and just make something happen, she stepped up. We knew the only way we were going (defeat Iowa State) was if Brooklyn got the ball and did it herself.”

Entz got the Wildcats on the board in the early portion of the second half.

“That first goal was unbelievable,” Romo said. It was an unbelievably difficult ball to hit.”

She capped the game with an eye-opening goal as she fought off three defenders.

“Her second goal was a ‘SportsCener Top 10 play,’” Romo said.

“She took three girls, cut one, put one on her butt and finished it with her left foot. It was a beautiful goal to cap a beautiful game. We couldn’t be more proud of her in that match. She has left a lasting impression on this program.”

“When I first got here to now, it is night and day difference,” Entz said. “We play good soccer. We compete with the best teams in the country. We are playing very well. We are making teams adjust to us. Teams are scouting us. They are changing what they are doing for us, and that has never happened before. “

Because the senior midfielder must transfer to another university to complete her degree in psychology, Friday’s game — which will kick off at 5 p.m. at Buser Family Park —will be her final as a Wildcat. Nostalgic feelings have been flowing through her body all week as her career in Manhattan comes to a close.

“I think I will be a mess,” Entz said. “I love everybody here. I love the people and I love the coaches and the school. It is going to be a hard day for me on Friday.”

Romo believes Entz can serve as an inspiration for others who come from humble beginnings.

“Watching her grow as a woman in this program, she set the bar. You can come from a small rural community — Newton, Kansas — and be a dominant force in a women’s soccer world and put yourself on the map,” Romo said. “She put our university, our institution on the map and at least in the women’s college soccer world, she has taken it by storm this year. There are a lot of people who are actually noticing Kansas State soccer now because of the Brooklyn Entz’s highlights online and (on) social media.”

The legacy she’s leaving at K-State, Romo said, “might not be topped” any time soon.

“I could not be more happy for her. I hope she fulfills her dreams of going professional, because she can absolutely do that,” Romo said. “There are plenty of Power 5 teams who do not have a National Women’s Soccer League player on their roster. To have one within our first four years in the Big 12 speaks volume where we are headed, the development of our players in this program and our development of Brookelynn.”